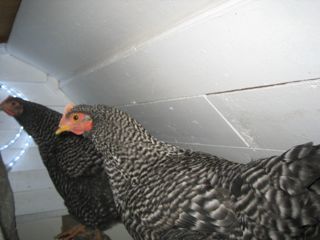 Here are some pics of the quilt system:
Nov. 24 improvements: I decided to buy a heated dog-water bowl, to put my chicken waterer inside the bowl. This is thermostatically controlled 60-watt heater. Since I was going away for Thanksgiving, this was critical since my chicken-sitters couldn't be asked to take out unfrozen water 2x a day.