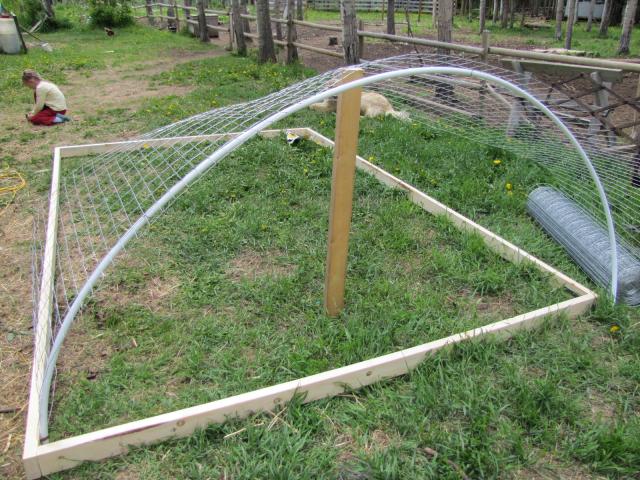 This is some of the supplies: The drop cloth and pex pipe: I chose the drop cloth over a tarp because it won't scare the chickens as bad and it will last longer and looks nicer. First we screwed the 2"x4"'s together: We made a little indent in the ends of the 12 footers just big enough to fit in the reinforcers: This is the corner with the pex pipe going up and the fence stapled on, later we screwed the reinforcer on: Here is the fence streched over the pex pipe the 2"x4" is just there while we are building:
The fence and pipe are 12 1/2' long, so the pen is 4' high at the tallest part.
We used 3 pieces of fence across the pen and 4 pipes. Here the cloth is over top the fencing. a 8' piece of fencing is on the end: We used hay wire to attach the pex pipe and fencing together you might be able to use cable ties to: Here is the other end with the door:
The dark wood across the top is a handle for moving it. Close up on the door: So far I really like it and wouldn't change anything except making the plywood end lighter.
I would like to build a little plat form with wheels to move it but I haven't yet, If I do I will post a picture.
Reactions: trumpeting_angel

Nice article on the tractor coop. I think I would want to make it a bit more predator proof
Good job. I like all of the pictures and the materials list. I wonder if the wooden end piece is left large because it's easier and it doesn't make any difference or if there is another more important reason you left it whole.
Cattle panels may have been more rigid but would have added weight. Nice work on keeping it light and mobile.
Reactions: trumpeting_angel
Read more…

Nice coop! I like how the inside is shaded, but still lit by the sun!