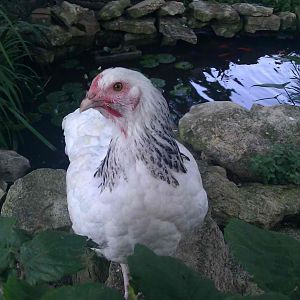 The project consists of Partridge Chantecler, Australian Coronation/Light Sussex, Plymouth Rock, Orpington and Cornish lines.
My goal is not yet reached, but I'm continuing to work on it continuously. I am getting an egg 5 days out of 7 from first year pullets, an I only hatch eggs from the cushion-combed pullets. I have sold several sets of eggs, clarifying that the offspring are still occasionally showing a single comb here and there. Coloration is inconsistent and most appear to have a black and white appearance, either like the Delaware, a Columbian or like an incomplete Lakenvelder pattern. Sometimes the partridge comes out and they have a lovely Silver Lacing on the breast.
I'm looking for rapid growth coupled with good laying ability and a good foraging behavior for lower feed costs when pastured. This is still a project, so I can't promise anything about the outcome yet. I know they have not had motility issues or any early deaths like the cornish crosses have, but they aren't ready to process that early, either. I don't intend to move into that class, but want something faster-growing than what is available currently without a large single comb.