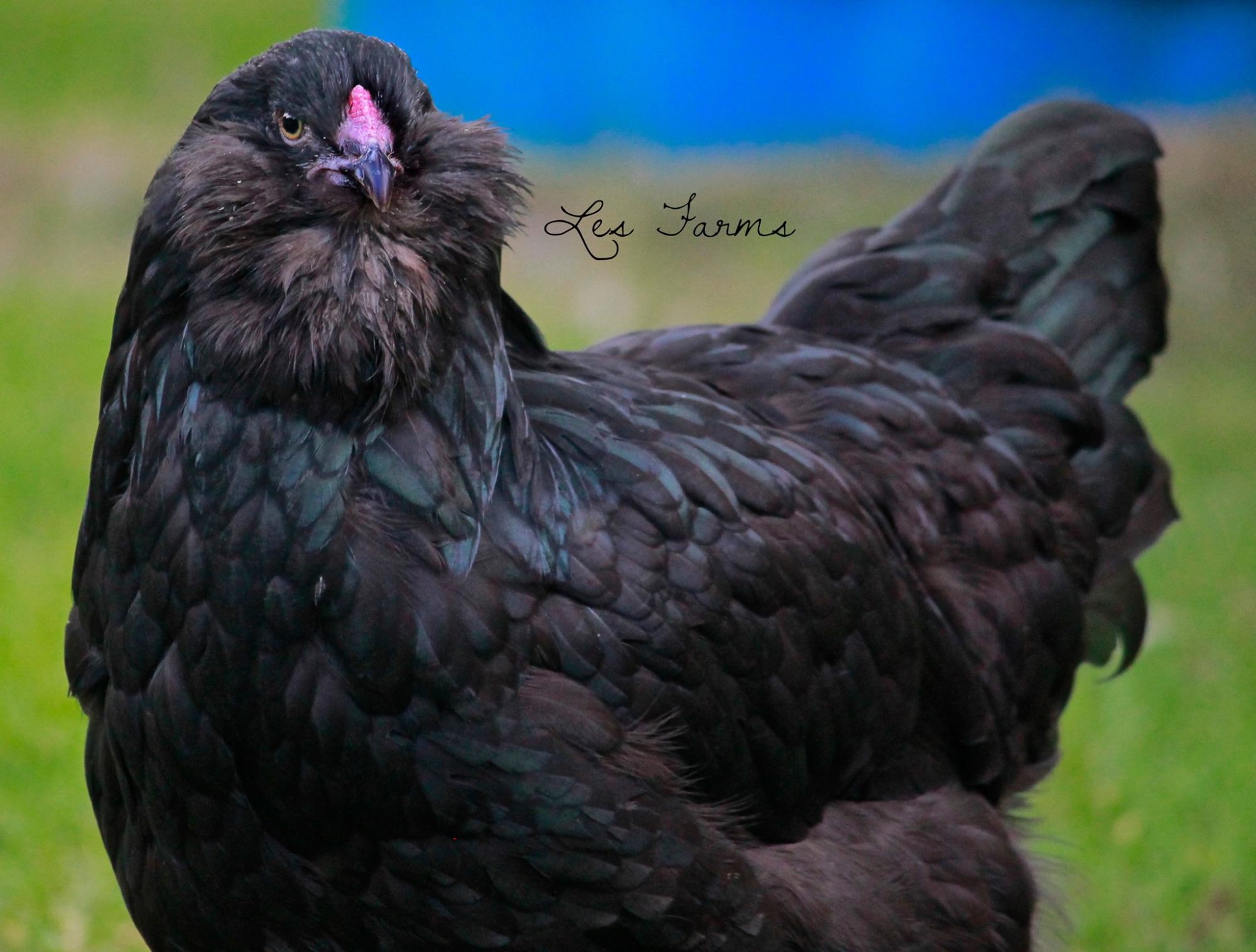 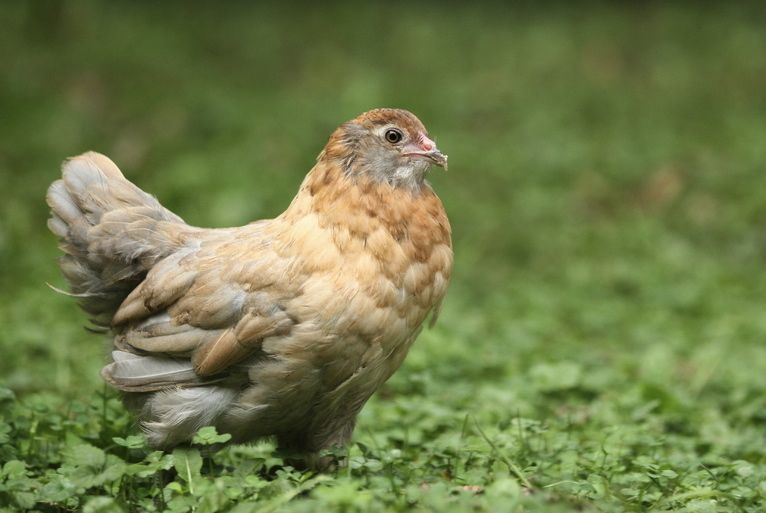 The Ameraucana is an American breed of chicken developed in the USA in the 1970s. It was derived from chickens brought from South America (Chile) that carried the blue egg gene and was bred to maintain the blue egg colour gene of that breed. There is also an Ameraucana bantam variety and both the LF and bantam variety were added to the APA Standard of Perfection (SOP) in 1984. Recognised varieties are: Black, Blue, Blue Wheaten, Brown Red, Buff, Silver, Wheaten, White.

The Ameraucana is one of the few chicken breeds to lay blue eggs, another being the Cream Legbar, which also have an Araucana influence. The Ameraucana breed shows many similarities to the Araucana breed, such as pea combs and of course the blue egg gene. The Araucana however has earmuffs and is rumpless, whereas the Ameraucana has a tail and is muffed and bearded. Their earlobes are small and round, wattles small or absent, earlobes, comb and wattles are all red. Their shanks are slate-blue, (tending to black in the Black variety). In Australia and UK both Ameraucana and Araucana breeds are viewed as varieties of the Araucana - tailed and rumpless.

Less rare than Araucanas, Ameraucana are still considered quite rare. They are often confused with Easter Eggers (EE's are often advertised and sold as Ameraucanas), which can lay blue AND green eggs. 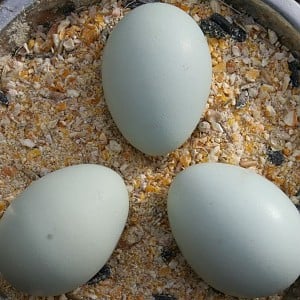 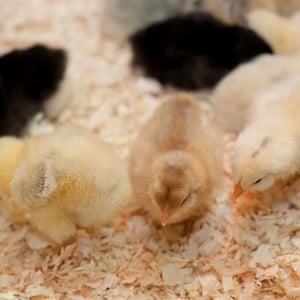 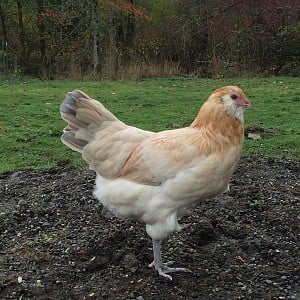 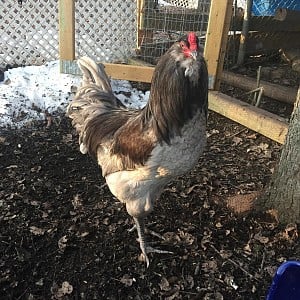 For more info on Ameraucanas and their owners' and breeders' experiences, see our breed discussion here:

Pros: Love this! very informational, and it helped me learn more stuff for fair!!!
Cons: None
Pros: Beautiful. Alert. Calm when handled.
Cons: Skittish. Have a strong pecking order even as chick's so need to give lots of space and be weary of chick's with odd behaviors.
Good description differentiating for EE and araucana.
Pros: Cutest little thing, sweet, pretty
Cons: Stop laying in winter!
They are great pets or layers. But they stop laying in the winter time!

How cute! My Americanna chick does the same thing - wonder if it's a breed thing (?) She screams when I pick her up, but then settles right down and seems to enjoy being held. If I pick someone else up, she'll rush over and try to knock or even pull them out of my hand. And when I'm putting someone back down, she HAS to rush over and give them a good going over. I guess she's checking to see if they got anything good that she missed?
Sorry -- I don't think EE was a choice when I wrote this. His dad was an Ameracauna.
EE's been a choice since this new feature has been here. EE is just the acronym for Easter Egger. But trust me, even his dad was more than likely an Easter Egger. If you got him from a feedstore or hatchery, he's an Easter Egger. If he was crossed to a non-Ameraucana, he's an Easter Egger. If he was from parents or siblings in which the hens were mixed colors or had green legs, he's an Easter Egger.
I have 15 Ameraucanas. What a wonderful breed of chicken. I have a crossbeak hen named Betty. She follows me all over my ranch along with my 2 dogs and a cat. My Ameraucana rooster is one tough little buckaroo.
You get what you pay for when it comes to this breed. My purebreds are awesome. Whe5re did you get them ?
My hatchery Ameraucanas (EE's) all act like that, but the purebreds are awesome. I have 12 because I love them so much, from 5 breeders. You should give them another try, but make sure it is from a good BYC breeder. There are several on here
americauna, I had three now down to two as of yesterday gave the rooster back to the lady i bought him from.he was just days old when i bought him.he was three months old last week and crowed for the first time he was so mean to his flock mates. he would peck and bite and would not let go until he pulled their feathers out.the lady i bought him from told me that americanuas was famous for being just down right mean.she breeds and raises all kinds of poultry.any roosters you end up with ,you don't want she will take back.he was one of a flock of ten.he was a holy terror.so glad to be rid of him.
One of our Ameraucana hens also turned out to be a cockerel. We were able to give him to a free range farm where they will raise him up. He was a big time playground bully too, always herding the others around and pinning them to the ground. It is amazing how peaceful it is in the coop now without him. I wish our two remaining Ameraucana pullets would chill out a little bit, but I'm afraid that it's just their nature.
My hen (Baby) went a little wacko when our rooster went to live somewhere else (no, not the stew pot), and she became the boss--clucking and bossing the other hens around, telling them to go to bed at sunset, etc. She NEVER physically challenged the others though. She remains sweet to us, and we are going to get her another rooster. Glad I live somewhere I can have one, as it was a mistake to get rid of him. Maybe your girl needed a roo.
I didn't think Ameraucanas came in bantam. Can someone clarify?
I'm waiting for my Blue Americaunas to hatch along with my Salmon Favorolles and Ancaunas..so far just one Ancona.
it seems like you have an EE (Ameraucanas only lay blue eggs)
I have an Americauna who is 3rd out of my five hens. she is the friendliest and cuddliest of all of them. Pretty good layer as well, I love her little mint-green eggs. Quiet too. My Leghorn screeches in the morning to be let out of her pen into the yard.
The older she is getting, the more friendly she is too. She doesn't squawk anymore either, she's one of my sweetest girls.
I have 4 ameraucans but they are not to aggressive yet . instead the white silkie is she thinks she is soo big and pecks are all of them
I have two Ameraucanas and two EE. All of them are curious, brave birds. They run to me for their treats.
We have one Ameraucana and you are right about them being shy and running away, but I haven't seen the aggressiveness as of yet. Our Elizabeth Taylor is a beautiful bird with puffy cheeks that make you want to pick her up and cuddle, but that's not happening. We haven't seen any eggs, but she is 22 weeks old so I'm guessing it may not be much longer. We're all taking bets on what color eggs she will lay.
Glad yo know you been keeping them so long!!
Why don't you want fertile eggs?
That's because they're chickens & they don't have the capacity for anything like what people think of as "love".
My Ameracanunas are pretty friendly. the friendliest of all my chickens. My Buckeyes are the ones who really don't love me back. And I've nursed each one of them.
You must log in or register to reply here.