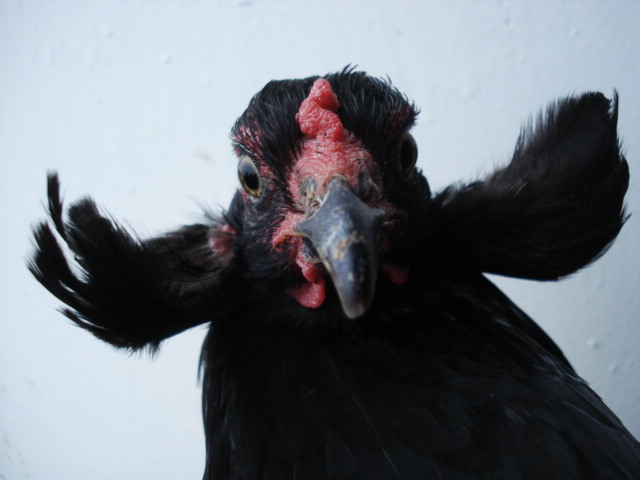 Breed Colors/Varieties
APA recognizes: Black ,White ,BBR, Silver & Golden Duckwing.There are also many none standard colors, we have Lavender araucana in development ourselves. 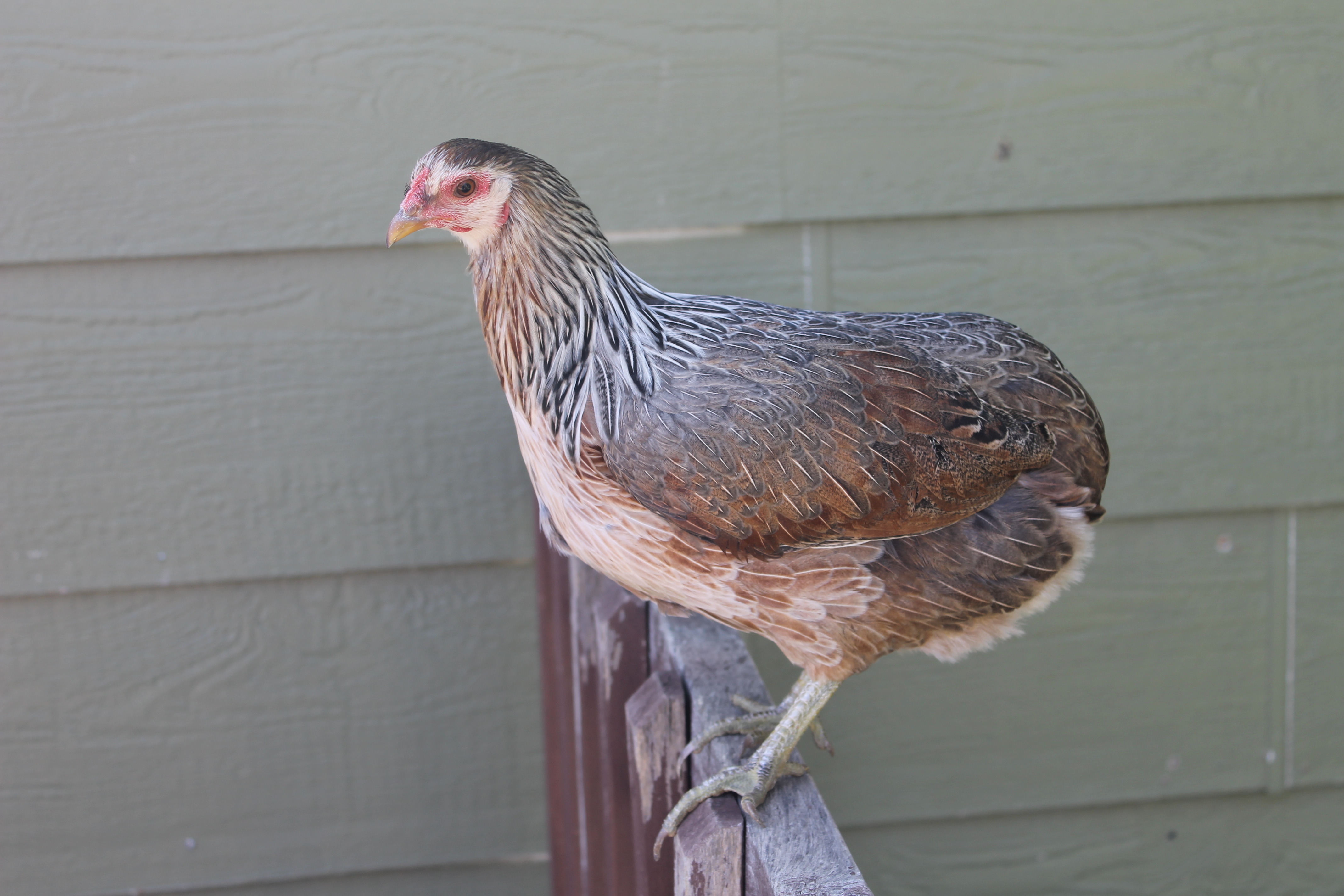 Araucana is a very rare breed with much controversy and numerous challenges. Hatcheries add to these challenges by misrepresenting their mongrel Easter Eggers as Araucana and Ameraucana chickens. Araucana and Ameraucana chickens are breeds, which are recognized by the American Poultry Association (APA). Easter Eggers are not a recognized breed because they are a cross of different breeds to produce various plumage colors and eggshell colors. Easter eggers are a novelty for backyard folks who enjoy pretty chickens that lay various colored eggs. Enthusiasts typically breed Araucana and Ameraucana to a standard of perfection to preserve their historical value.

The origin of the Araucana is still up for debate, however many believe they came to America from South America, sometime during the 1920s or 1930s. The primary reason for breeding Araucana was because of their ability to lay blue eggs. They are often considered dual-purpose fowl and make good table fare. For a smaller standard size breed, hens typically lay nice medium sized eggs.

The Araucana have two distinguishing characteristics that set them apart from the other breeds. They are rumpless (have no tail and the complete absence of a tail bone) and they have tufts (often called earrings), which grow from a protuberance (or fingerlike appendage)called a peduncle around the ear lobes or neck area. Tufts can be bilateral, unilateral and even trilateral.

The tufted trait is a lethal gene on Araucana, which makes it difficult to breed. Two copies of the tuft gene are fatal and results in chicks dead in the shell, typically around days 18-21 in incubation. Even a single copy has been known to reduce hatchability, making this breed very difficult to propagate.

The rumpless trait has produced challenges for breeders as well. This includes backs that get very short, from excessive rumpless to rumpless breeding, which results in future generations being unable to breed naturally. Rumplessness does not occur consistently in breeding Araucana, which results in chicks hatching with partial tails and even full tails. This can make for a lot of culling and very few selections to choose from for the show ring. 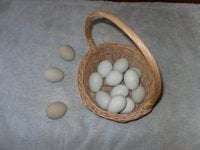 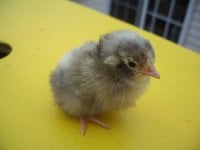 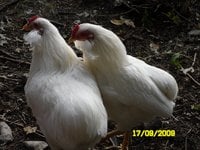 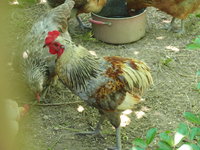 Pros: I know that my birds are now only part Araucana. They still lay blue/green eggs.
Pros: Good genreal info
Cons: Didn't mention that the tails are the standard in Australia and both are accepted in the u.k
Reactions: Mudda Clucka
Pros: Lays unique blue/green eggs.
Cons: Doesn't lay as many eggs as other breeds.
Every year we get at least a few Araucanas. The eggs are lovely and every Araucana is unique and differently-colored. They don't lay as many eggs as other breeds such as Rhode Island Reds, Leghorns, and Plymouth Rock. However they make up for it with the unique coloring of their eggs.
Reactions: Gigirunr
Read more…

Does this mean the lethal gene doesn't exist?
How is your fertility rating?
Fertility for me depends on many variables; can be from poor to excellent. The lethal gene does exist but is recessive, and only pops up in a 25% chance from Tufted parent x Tufted parent. I myself almost always breed Tufted x Clean-faced, I get the same results except no lethal gene/dead chicks.
I have been looking into buying some, show quality. Does anyone know any good breeders?
I would like to buy some fertile hatching eggs from you if possible.
Are you selling fertile eggs?
Yep, I am.
Thanks for the review. I am trying to decide between Araucana and Creme Legbar for blue eggs.
There is a thread on this forum with instructions for making a roll out nest box. The thread starter has plans for sale. I converted my nest box to a roll out system and yesterday found a soft shelled egg in there! Mine would have eaten it if they could get to it.
My Barred Plymouth rocks are clumsy and do break eggs often.
Unfortunately if you purchased them from a store, the chicks came from a hatchery. No hatchery sells purebred Araucanas, but easter eggers, mutts who may or may not have the blue egg gene. Hatchery EEs are often bearded and muffed, which is genetically different from tufts and look different too.
All breeds can eat their eggs. Put marble eggs in the boxes, that worked for us!
Those are Easter Eggers, not Araucanas. Despite what your supplier told you, there's actually a difference, and Araucanas don't lay many colors of eggs like Easter Eggers do. Easter Eggers aren't a purebred breed either, but Araucanas are.
Your title says Ameraucana but you're writing about Araucanas - Are you sure it isn't Easter Eggers you have? Did you get them from a hatchery or feedstore? Do they have tails?
I had some EE until a week ago. I have had rumpless tuffed in past,bantam and full size. I would like to get some full size rumpless and tuffed again. I agree great pets and to just watch. I know it is late in the year,so spring is not far away. Will you have chicks in the spring. Tony
I don't sell chicks to people outside my local area, so, unless you're in western Washington state I'm sorry I cannot help you. I do ship fertile eggs though.
thanks i will remember that
Nice info on this interesting breed....I enjoyed reading this post
Great post!!! Beautiful Birds!
Just realised I should've put this in the "British tailed Araucana" section
wow? I didn't know some of that info very helpful. I most def want to add some to my flock
def good advice. did your 3rd hen ever lay an egg?