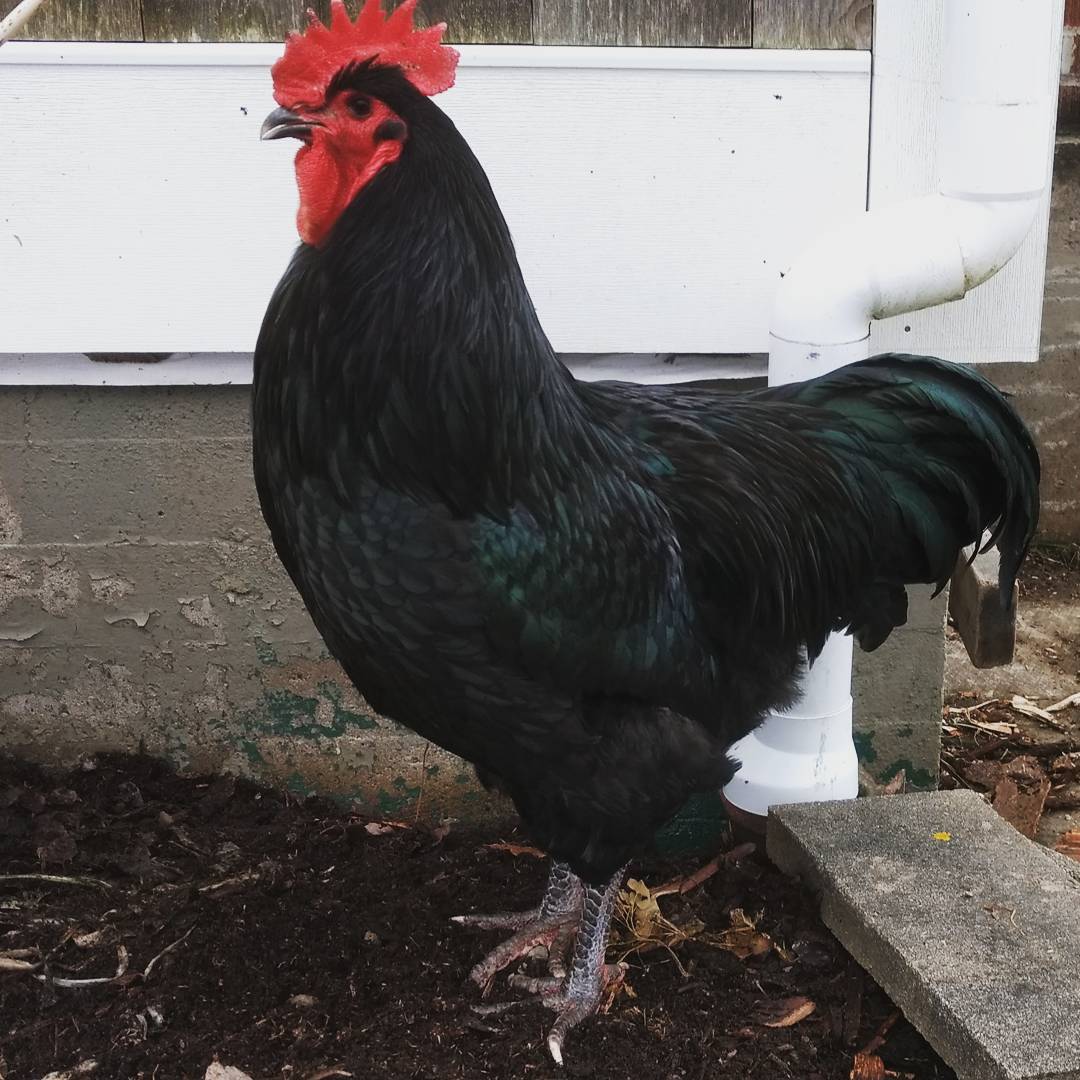 Breed Colors/Varieties
Black, Blue and White are recognised in the Australian Poultry Standards 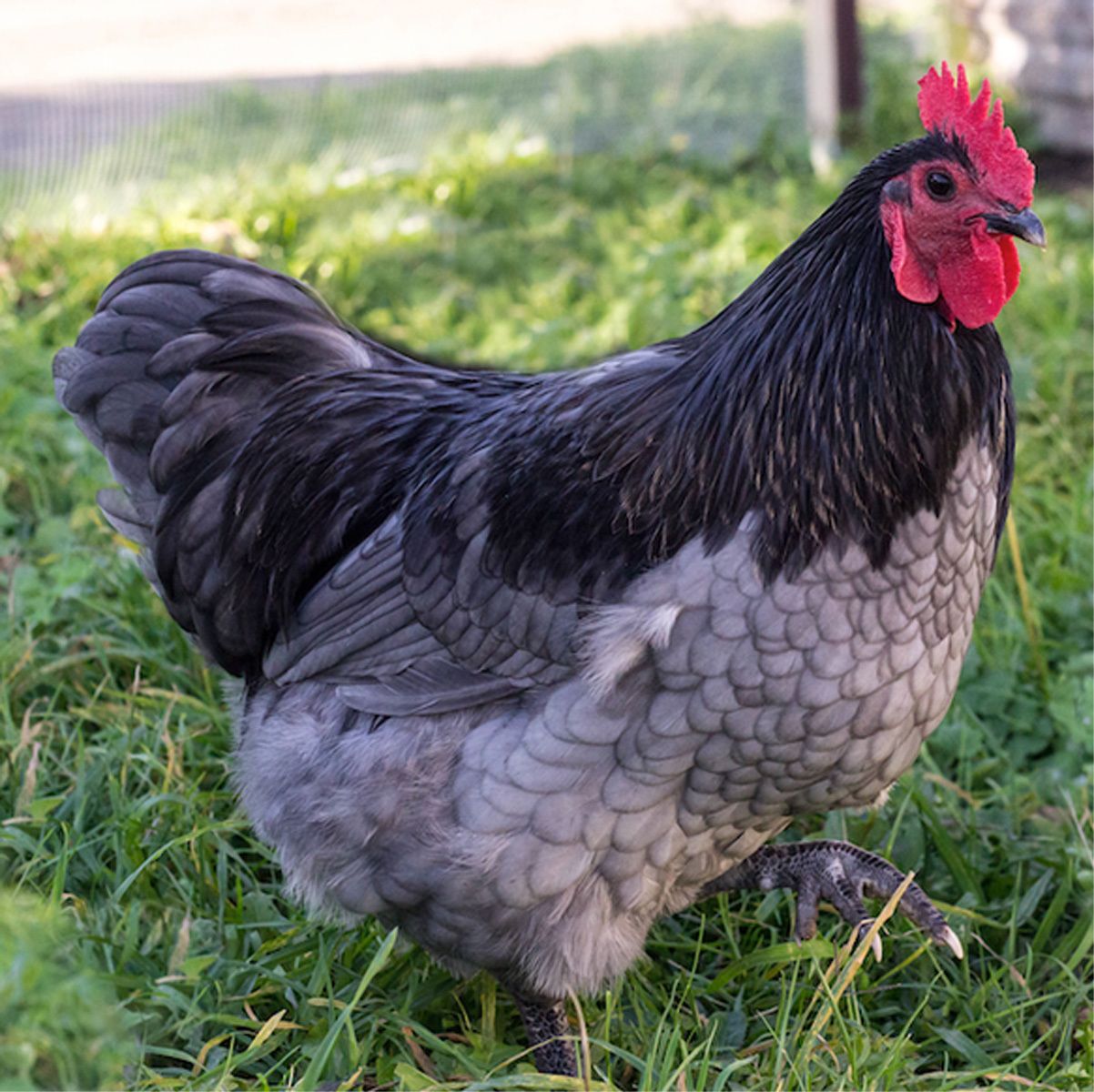 The Australorp is an Australian breed which was developed from Black Orpingtons imported into Australia starting around 1890. The egg laying ability of the Orpingtons was emphasized by the Australian breeders, and other breeds including Minorca, Leghorns, and Langshans were bred into the lines to increase egg production and decrease broodiness. The result was a bird with exceptional egg laying ability. They were popular entries in egg laying contests in the day and for years Australorps held many of the world egg laying records, one hen famously laying 364 eggs in 365 days.

These "Australian Black Orpingtons" were given the name Australorp around 1920. Australorps were exported in the US and England in the 1920’s, where they were an immediate hit because of their great egg laying ability, and they remain a very popular breed to this day.

Australorps are a medium sized breed. The APA recognises only one color, the original Black, but there are several other colors developed by breeders, including Blue and White, which is recognized in Australia.

They tend to be calm, docile, fairly quiet birds, with nice temperaments and they make good pets. The roosters are generally good natured. They are dependable winter layers of big brown eggs, fairly heat tolerant despite the usually black feathers, and quite cold hardy. They generally do not fly well and take well to confinement. The hens will occasionally go broody and make good mothers. They are very popular with backyard flock owners looking for a friendly productive brown egg layer, and small flock owners looking for a duel purpose breed with hens that have excellent laying ability.

It was recognized by the APA in 1929 and it is on The Livestock Conservancy's Recovering list. 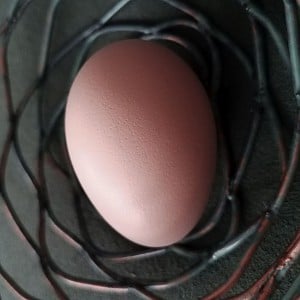 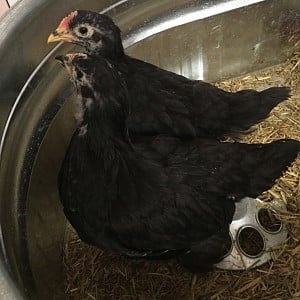 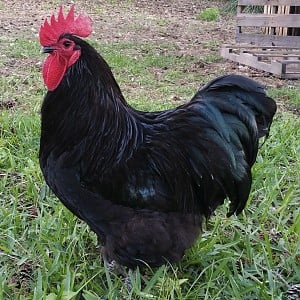 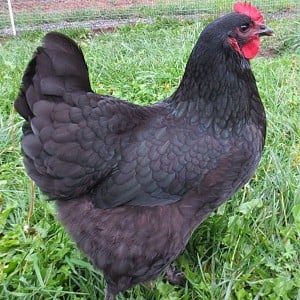 ​
For more on this breed and owners' experiences, likes and dislikes, see our breed discussion here:

Pros: Friendly, quiet, great egg layer
Cons: None
I love my Australorp hens! They're beautiful and so soft. Both are friendly and don't mind attention. One of them likes to crawl into my husband's lap and snuggle regardless of what he's doing or if he's in the mood for chicken love. They get along well with everyone else in our mixed flock. I've never seen them pick on anyone else and nobody really picks on them. They're just the bff to everyone else. Oh, and eggs for days! They consistently lay an egg a day. We've rarely missed one and when we thought they were slowing down, we found a rat snake in the coop so I can't blame that week on the girls

Reactions: want2know, ChickenGirl300 and Pgrine
B
Birds4Life
I'm very new to chickens...love birds but never had chickens. We just ordered these. My beau says they may be okay intermingled with the current plymouth barred rocks we have (also docile). Any experience with them with other hens? Appreciate all guidance. Excited to be learning about & caring for chickens

want2know
Welcome Birds4Life, I have a Barred Rock, and an Orpington, and a standard Cochin, and 2 other Australorps, and they all get along fine, other than the typical pecking order spats. Nothing like when i had a Black Star and 2 Red sex link hens. If you have the right Rooster, he can keep the hens in line, but if he is more laid back there can be some really bloody dangerous fights.
Pros: Great consistent egg layer
Cons: Not as friendly as some of my hens
Consistent layer of large eggs and quiet most of the time. May become noisy if they perceive something is amiss. Loves to free range. Not very friendly but does remain curious when I offer corn, bread or any other snack.

Reactions: want2know
Pros: Docile, friendly, sweet
They are so sweet!! I had 3 of them!! Those names are duck, margarita, and forgot the last name of my other bird. Duck was the runt out of them, the first day we got them she played in the water!! Day old chicks!! She was debeaked!! I love them so much!!
Reactions: want2know and Matejka
Read more…

I agree with everything you've said! I have three and while I've sold off most of my original flock of birds, the Australorps have gotten to stay because of all their wonderful qualities. I've found mine to be on the broody side, but that works for me since I don't have an incubator. They're great mom's too!
I am about postive that the Australop will be 1 of my best pick for egg laying.It is really difficult to decide on the ones I do want.I want Silkies,Favorelles,and I don`t what else yet,Thanks for info of all on BYC,Sandra
Thanks Knock Kneed Hen and Back Swamp Girl! I am new to chickens this past year and I am so glad I went with the Australorp. They couldn't be sweeter and more friendly. Had I known these birds could be such like pets, I would have gotten into chickens years ago! So far, none of my girls have not gone broody, although they are approaching 1 year old soon. I do not have a rooster so am not interested in chicks.
Good luck to the both of you and Happy Australorping!!
Dang...that is one gorgeous roo you have there!
where did yours come from?
same with me my girl is flightly even though she is the size of a watermelon not friendly hasnt brooded and only laid well for the first yr i have an isa brown that has laid well for 2 or more yrs and has gone broody and raised chicks
yea
my girl is flightly even though she is huge and doesnt lay very well at all and doesnt brood
"the size of a watermelon" - too funny. I had to look up ISA Brown, is that one in your avatar?
I have one of these, and she is a beauty ! I love how she looks greenish in the sunlight

I love my australops and barred rocks, getting more in the spring
no lol thats not it i cant post a foto it looks like a red sex link crossed a red star and a red comet
it all brown witht he neck feathers being darker with yellow legs its beautiful midmolt its all speckeled and mottled lol
HAha. Can you expound a little on that?
Wow! I've never heard a comment like that on Australorps before. Everyone I've known with them likes them a lot.
Is it because they're black?
Love australops
Great species, friendly, talkative, nosey.
Would you give us your reasoning for that statement? Mostly everyone else said positive things about the breed.
Why? Can you give some reasons? And how do they have "all" cons? Almost everyone else said that they loved the breed.
yes I have 4 very shy
We have 1 Black Australorp who is head hen! She is quick to put the lower ranking hens in their place. She also tends to go broody so not our best egg layer. She is 2 years old and went broody twice last year. We wondered if she would be lower in rank after spending so much time in a nest box trying to hatch non-existent eggs but she came out of the experience still on top!
You must log in or register to reply here.