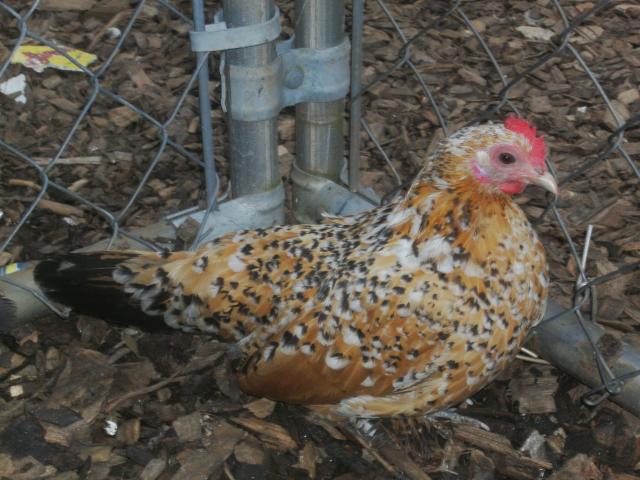 According to some books this breed appeared in the 1800s and was not produced for meat or eggs and were really only ornamental poultry. In the Netherlands they were known as the Sabelpoot. They were also used in the creation of the Belgian Barbu d'Uccle. Please note that the Booted Bantam is different to the d'Uccle. They tend to be heavier than the Belgian D'Uccle by a few pounds. In some cases the egg colour is tinted, rather than white also making it different from the d'Uccle, however normally they lay white eggs. Booted bantams are non-beared, however d'Uccles are. Also, d'Uccles are more common than the rare Booted.
Reactions: BlackHackle
Share:
Reddit Pinterest Tumblr WhatsApp Email Link

Pros: Friendly
Very pretty
Nice to other chickens in the flock
Cons: I can't think of any
This is an excellent chicken breed for all purposes! I can't say much about egg laying because mine hasn't started yet. But, I can say that this is one of my most friendly chickens in my flock. The hens are easy to catch and aren't flighty at all. (at least mine is). This is a great breed if you are looking for a chicken that is going to be willing to sit in your lap for a long time.

Reactions: BlackHackle
Pros: Sweetheart, Gorgeous and Small Sized
Cons: Large feet feathers can cause issues
Booted Bantams live up to their name, their "boots" are HUGE! We had to cut our littles ones back so she could walk somewhat normally and forage with the rest in the day. We loved her to bits and she was the most enjoyable bird I've owned and I would never regret getting more. If you don't exactly want this one, try a D'Uccle, which is pretty much a sister breed to the Booted Bantams with all of the same perks but less foot feathers!

Reactions: BlackHackle
Pros: Sweet,pretty,good egg layers,and very soft
Cons: NONE
I had a hen to hatch a brood of chicks, and I got twin Booted hens, lily and lillieana. And they were so sweet, i would SO get 1or 2 or 3 or more again. If I were u, I would get some. but both lily and lillieana both died.

But any way, I love this breed!!!!
Reactions: BlackHackle
Read more…

my rooster
http://adisidana.sunphoto.ro/MII_DE_FLORI_PORTELAN__ISABEL/96999804
Hi I read your post sorry to hear about your chickens I have a pair of porcelains D"ucclecs and also some Mille Fluer's which is in your picture If you want some I will be happy to hatch some for you.just let me know.
What do the porcelains look like?
The ones i had were blue with a peach kind of lacing on them very pretty. Crazy i may take you up on that offer in the spring thanks
sure any time I'll post a picture of the porcelains as soon as I get chance to take a picture in the next day or two.
Awesome thanks
I LOVE THIS BREED SOOOOOOOOOOOO MUCH!!!!!!!!!!!:-D
You must log in or register to reply here.