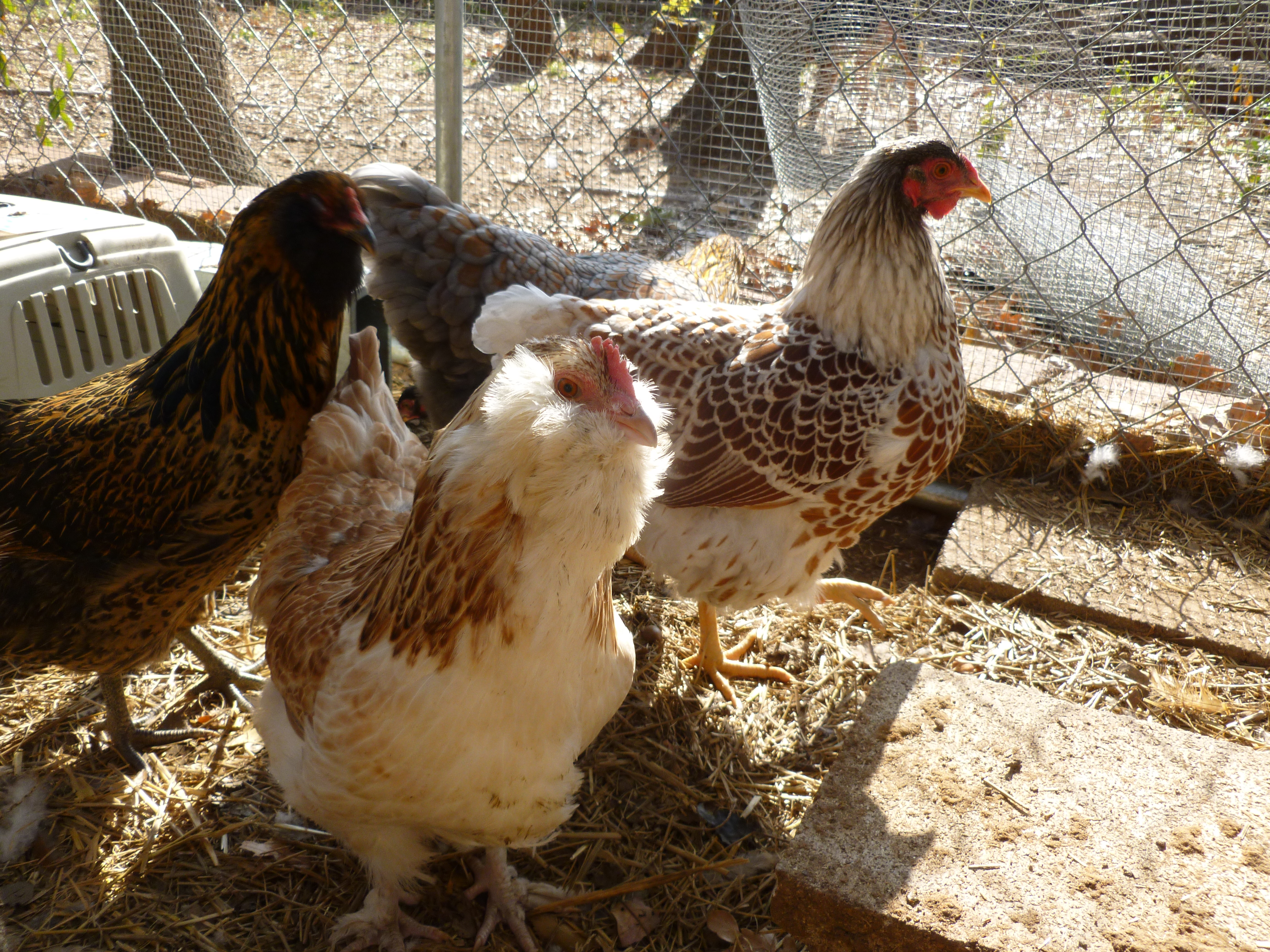 Breed Colors/Varieties
The most common colors are Salmon and White. They also come in Black, Cuckoo, Buff, Blue, Blue Salmon, Laced Blue, Ermine, Splash and Mahogany. Cocks are around 8 pounds, hens are around 6.5 pounds. 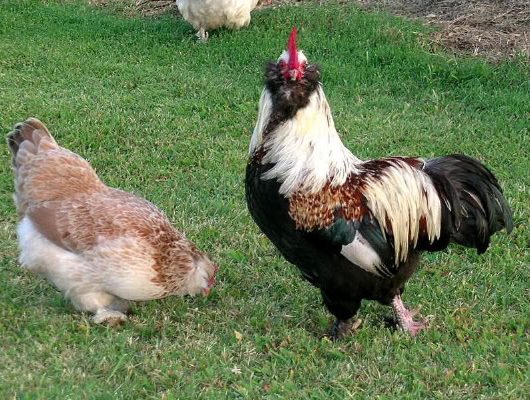 The Faverolles is a French breed of chicken, developed in the 1860s near the village Faverolles from whence it took its name. Faverolles are known to have quiet and docile temperaments. Their good nature makes them an excellent choice for the backyard flock owner and they are popular as pets for children. Their excellent temperament combined with their production capabilities, has also seen them becoming popular with small flock owners looking for a gentle dual purpose breed. Their gentle nature does make them prone to being bullied by aggressive breeds though and they do best in flocks with other quiet breeds of similar temperaments. The males are said to make extremely quiet roosters.

They are quite unusual in appearance in that they have five toes and feathered shanks, as well as being heavily bearded and muffed, and their most popular color Salmon, is a color pattern which is exclusive to the Faverolles. Salmon colored birds have the females appearing a lightly colored pinkish wheaten and white, compared to the males which are a striking combination of black, gold and straw color, both have slate colored underfluff.

Many different breeds were used in developing the Faverolles, including the Houdan, Brahma and Dorking. They were originally bred to be a dual purpose production breed, and it is still fairly early maturing, quite winter hardy, an excellent table bird and the hens are good layers of large tinted eggs, especially in the winter. In the early 1900’s Faverolles were producing most of the eggs for the Paris, France market.

The Favorolles was imported into the US in the early 1900’s and is a very popular show bird today, both in standard and bantam sizes. They come in a number of colors, including the best known Salmon, White, Buff, Cuckoo and Blue among others.

It was recognized by the APA in 1914.
It is on The Livestock Conservancy's Threatened list. 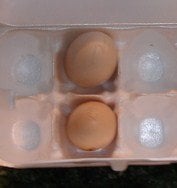 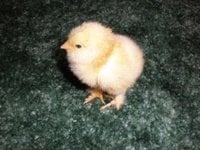 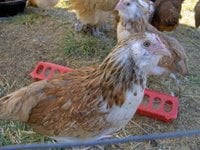 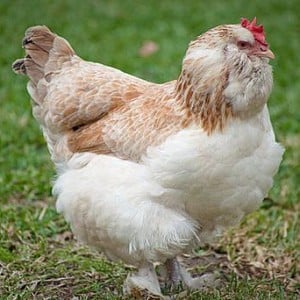 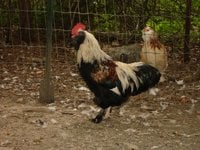 For more information on this breed and their owners' and breeders' experiences with them, see our breed discussion here: https://www.backyardchickens.com/threads/chicken-breed-focus-faverolles.1011648/
Reactions: Trevorusn, Miss Lydia, janiedoe and 3 others
Share:
Reddit Pinterest Tumblr WhatsApp Email Link

Pros: Calm and docile, easy to introduce new birds to existing flock and great for young children to show for fair
Cons: A little later to mature than others
We purchased our breeding flock of Faverolles spring of 2019 and my 5yo showed them for 4H and they were so docile and friendly. VERY easy for him to handle and didn't run if they got loose. We also introduced a few new hens to the flock later in the year and one of the existing hens actually took to mothering and defending the 8wk olds even though she wasn't even fully matured yet!

Pros: Cute, friendly, silly
Cons: Not always smart, broody (is that a con?), feathered legs, beard gets dirty
My Faverolles were worth a laugh. They always ran with their head down at full tilt. I've never liked feathered legs though.
Reactions: Miss Lydia
Good intro article on a beautiful bird. Both hens and roosters have unique coloring, the rooster is especially vibrant. Great breed to get into and bring out of the "Threatened" category of the Livestock Conservancy, amazes me they even reached that level being such a good farm breed.
Reactions: Chickassan
Read more…

I'd be curious to know...are your birds hatchery or from a private breeder, and how old are they? Faverolles are known for laying a medium to med/large size egg, but most of my girls lay a large to lg/xl size. There is a HUGE difference in temperments between hatchery Favs and breeder Favs. I still have the first Fav hen I got from a hatchery (her and her mate and an EE - my son won't let me get rid of them, so they have their own "quarters" LOL) and she is the single meanest hen I have ever had. I can't even touch her unless I have leather gloves on and long thick sleeves, because she's out for blood. My breeder flock...I have one hen that sits on a cabinet that's in their coop and stares at me until I hug her, then she'll jump down and run back outside. They tend to be more flighty when they are younger, but settle right down when they hit right about 10-12 months of age...

They're 9 months old, and they are hatchery girls. They're also smaller than I expected them to be, but these are my first faverolles so I'm not sure exactly when they mature. I can get close to them without a problem, and they will take treats from me if it's something they REALLY want and my alpha hen isn't there to grab it first, but they're used to me and I handle them daily. And they're not complete pushovers... they will peck the dogs if they get too nosey.
So, yes, they "should" calm down more in a few months, though being hatchery, I wouldn't guarantee it. The size thing doesn't surprise me, it's an issue with LF Favs, even in private breeder flocks, and all the hatchery Favs I have seen in person are very very small.

yes these are one of my favorites i had a rooster named peppers he was a beauitful,sweet lovelable bird till the neigbor dog got him he died defending the flock it was the saddest day . we miss him so much my husband and grandchildern said it not the same going into the barn with out him therefore we are planning to get a few chicks this spring, since then the dog has been remove and we have better fencing for free ranging our poultry. faverolles have a wonderful freindly disposition. we had the standard size and have 4 hens they are wonderful broody hens
I am in love with how they look too! I love chickens with fluffy faces and gentle hearts. I hear these are very gentle. We are trying some this spring for the first time. We have a farm that offers chicks of various breeds, guaranteed pullets. We are getting two Americaunas, two Favorolles and two barred Rock pullets to add to our flock this year.

I've had nothing but Favs for the last 4 years. I've yet to have a rooster be aggressive toward me or anyone else. If you have more than one rooster, they will crow a lot but thats only natural and to be expected. The hen's can be noisey when laying (can't say as I blame them!). They are devoted mothers to their chicks and have raised several batches for me over the years (saves money buying and brooding my own). I really love the birds, they're very curious and friendly. When I go out side for chores, the girls all come running for treats. The roosters are very attentive and protective of the hens, but if you have too many, they can be rough on the girls. They winter over very well with no supplemental heat. I keep the lights on during winter and have only a slight drop in egg production. The eggs are fairly small, but taste great! The favs are also very good eating birds, even at an older age. If you're looking for a good "family" safe bird in a colder climate, this is it!!
Sleeps on her back? Oh, that is funny! I have 2 girls who don't like to be held either. They are friendly enough, but not lap chickens. They are the biggest talkers too when it is egg laying time, or they want something. Just won't shut up.
Lol... ours hasn't started laying yet, but she's first in line for everything and is getting HUGE!
I AGREE! I have 2 and love them. Both big chatterboxes.
Oh no! I can't have a loud chicken, and I recently ordered 5 chicks on my pet chicken. They are 2 silkies, 1 buff orpington, 1 cochin, and 1 salmon faverolles. Are the Faverolles very loud? I'm actually not allowed to have any chickens at all where I live, and I do NOT want to give my neighbors a reason to report me. What should I do? Are they all loud?
we love our salmon faverolles! We have both bantam and large fowl!
They are chatterboxes but no louder than my others. The one time ALL of my chickens are loud is when just after they lay an egg they sing their 'egg song'. That is loud!
I agree! I can't stand mine, she is a devil chicken, mean, likes to stir up trouble, pecks my sweet splash marans!
very interesting...mine is terribly mean, and she is from a hatchery. I am on the verge of getting rid of her, she is a bad seed.
Wow, I'd get rid of her if she's mean. Faverolles are known for being one of the most docile breeds. I've never had a moment of aggression from any of my 3 girls. The most "aggressive" behavior I've seen is when Barbeque will complain for hours because the other chickens keep taking her favorite nesting box, and she's not aggressive enough to jump in line.
Oh, I agree! We love them too. We have 10 Fav hens, lost our roo last year and he was VERY gentle and gorgeous. We hatched 5 chicks 2 weeks ago just wanting another roo. The hens laid through the winter - we did have a heat lamp b/c it was soo cold, and our friendly Ameraucanas laid through too (I'd feel a bit guilty if I left out the "Flower Power Girls" - they consistently shower peace and love with thier tie-dyed apparel - gotta get those girls some Janice Joplin shades!). I used to think the Favs didnt like to be held but they'll squat as often as the Ameraucanas and when we pick them up they hunker right in for affection - I think its a French thing.
Was thinking of getting a Faverolle. Would also be getting an Orp (or 2), a Sussex and maybe a BR. Orps are supposed to be low in pecking order also. Not sure about the Sussex or BR. Are the Faverolles quiet? I don't want any birds that will make my neighbors upset. TY
The two roos I raised in a very mixed flock of mostly roos (to see what they're like in person) were very docile. If I could have a large mixed flock, I'd have Fav roos, but they get picked on by other breeds because they are so docile. With more than one roo, separation may be necessary. Wish all roos were nicer like the Favs.
I had a Salmon Faverolle a few years ago, named her Rose. She was a beautiful bird, I really love the breed and hope to have a few again someday

You're right about their tendancy to get picked on though! They are a bit TOO laid back sometimes lol.
mine is called Gwendolyn too and she's an absolute darling. the other birds, when they flap their wings always make her run though
You must log in or register to reply here.