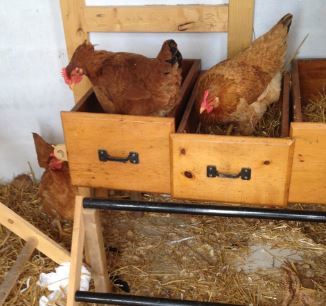 Related to Red Rangers, Freedom Rangers are excellent meat birds. Hens do not lay as steadily as...
Overview Reviews (5) Gallery
Leave a rating

Related to Red Rangers, Freedom Rangers are excellent meat birds. Hens do not lay as steadily as other breeds, but will lay into winter even without artificial light.
Reactions: PioneerChicks and Estomih John Awary
Share:
Reddit Pinterest Tumblr WhatsApp Email Share Link

Pros: Didn't sit at the feeder, Will fly up on a roosting bar, Will flock with the egg laying birds.
Cons: Most aggressive chickens in the flock, loves to bully bantams and can seriously hurt them, although they do not chase smaller birds very far.
I had 4 Red Rangers/Freedom Rangers that I bought at TSC just to check them out. They were too active with too much personality to kill. I gave away 2 males to a neighbor who will dress his own roosters from time to time. He told me the meat was great compared to the Heritage roosters he usually eats. The Females I kept to see how they lay. They just started laying and the eggs are a bit small compared to how much they eat. I rationed their diet and put them in the composting pile pen where there is plenty to scratch through. I also rationed their feed to keep them fit and trim for breeding. Next I added an Ayam Cemani rooster cull and will be hatching out some of their eggs that will hatch next month. The goal there is to get a larger black meat bird. I plan to cross them with a Dorking Rooster when my Cockerel matures. Maybe I will end up making my own meat birds. Their eggs are a big small considering how big they were when they were day old chicks. Maybe he eggs get bigger as they fully Mature. These girls started laying very early, none of their brooders mates are laying as of yet. I bought them in late February and they started laying in Late June. I believe they started laying about a week sooner than the leghorns I had bought in the past.
Pros: A Real Meat Bird That Can Actually Walk or Hobble and the Nicest Birds We Own
Cons: Feet and Lazy
These birds are great because of their size and friendliness. They look funny when they walk because its different from the majority of chickens. The bottom line is they can get to where they want to, especially if there is food there. I like them better than cross cornish because they walk for the most part and actually forage somewhat. They are extremely lazy, because they move to their food and lay down in place to eat. They rarely stand in one place and just go to their belly and sleep. I got them from the Amish who got them from Townline Hatchery in Michigan. These are the only birds that I will buy next year. We have one hen left. Her name is Jumbo. She's 4.5 months old and I don't think she's laying yet. If she is they are the small ones that we just started getting. Rooster were not mean. Their size and clumsy feet keeps them from effectively fornicating.
Pros: Supposed free range chicken, red in color
Cons: Costs more to raise, not any more adept at ranging that any other meat chicken, longer to raise, huge carcass with poor meat to bone ratio, a hybrid
I have raised Cornish Cross meat chickens for the past 10 years, and one day I went to take my batch of 75 to process and some guy suggested I raise some Freedom Rangers or commonly called Red Rangers.
So the next year I raised a batch of 25 of the FR/RR and was not impressed.
Let's take a step back to that fateful day when I went to the butcher...
That man's FR/RR chickens had a much larger body cavity than my CC, but I would safely say that they had % less meat and were raised for 4 weeks longer than my CC.
When I raised the FR/RR, I have found that they don't range any better than the CC, took more feed and time to raise than the CC.
When I took mine to process, I was not impressed with the amount of internal fat that they had, compared to the CC.
Will not be raising the FR/RR again, nor recommending them.
Read more…

What was the cockerels' weight when dressed?
My roosters averaged 4 - 5 pounds dressed at just under three months.They were much leaner than my CX, with some very dark meat. I processed the first two at about 8 weeks (with my CX, because they were having problems with their feet) but they were self-sufficient enough that I kept the rest around. The ones I butchered a little later had a much richer flavor, too.
Hi. I'm considering this breed. Thank you for your information. Your birds with foot problems may have had a Vt B 12 deficiency.
A little side not about farm stores in general.

TSC and almost every other feed and hardware supply company buy the cheapest bulk they can, therefore they may get crossbreeds say like a RIR X white leghorn and sell it as a RIR. This has been going on years and years, I think they know that they can go to court and prove it is a RIR by saying it's half. You notice they very seldom ever say purebred, and when they do they may or may not be. Get purebred chicks from a hatchery or an realiable neighbor and sometimes they think they know and swear by it but they really don't know. If a neighbor say they bought pure bred's from a hatchery then they most like will have pure breds.
Freedom rangers are a hybrid and will not breed true. Probably a 4 way cross so it cannot be duplicated. Any chicks hatched from them will not be the same as the parents. Cornish x are the same. Secret blend of a 4 way cross.
@hytop3 I would agree, and also I believe Tractor Supply (at least the one near me) often sells straight runs as all pullets. Bought some Buff Orpington "pullets" and only ended up with one hen. Also, the employees could not tell me where they purchase their birds. My local farm store however (not tsc) is very trustworthy and buys all their stock from Ideal Poultry.
What do you do about poo in therapy setting? Wear diaper?