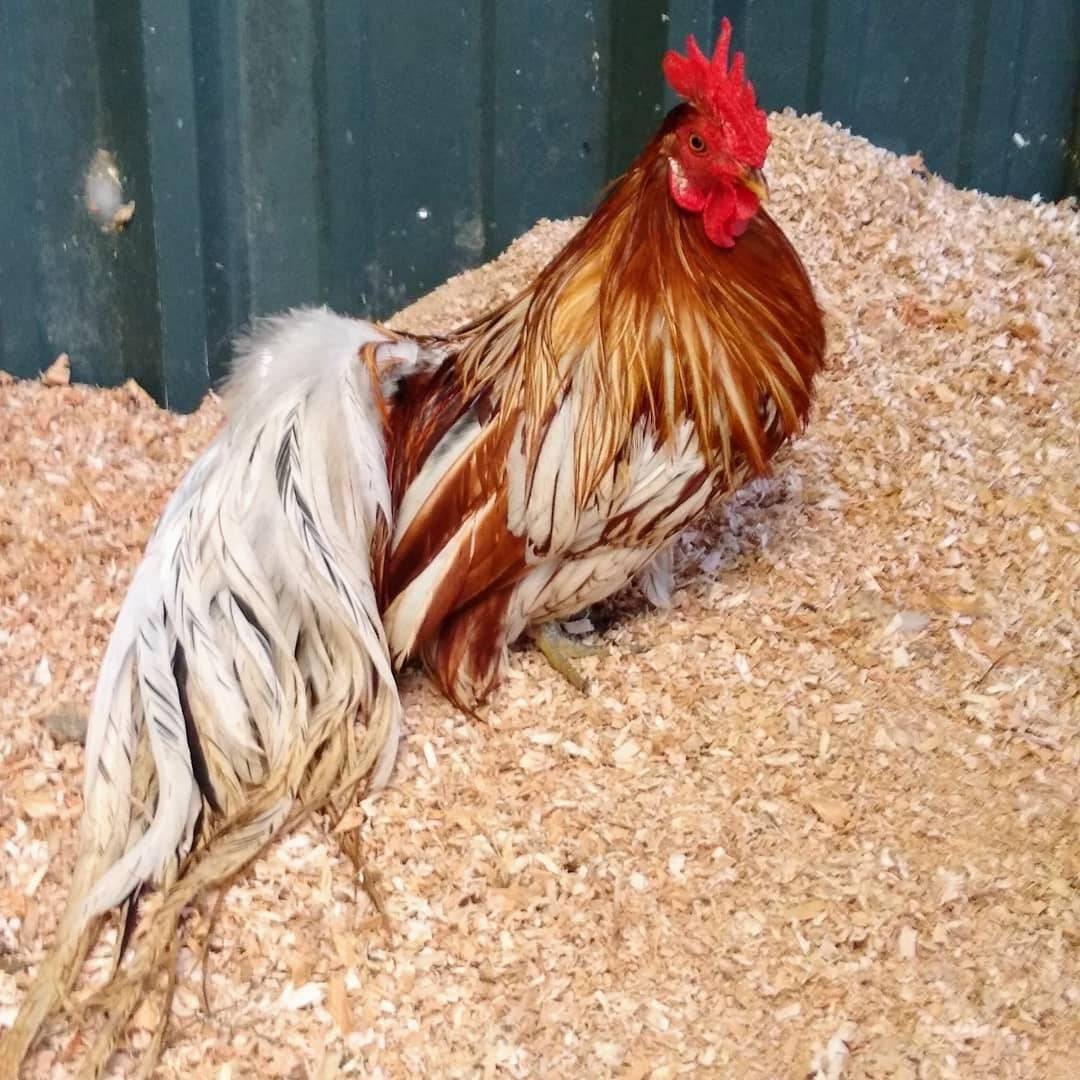 Breed Size
true bantam there is no standard sized version

The Ohiki are very round and broad most of all at the shoulders. The breed is very proud and elegant a males stand with his breast out and head held high. They look much like a clean short legged long-tailed Cochin bantam. They have willow colored legs and white earlobes and lay eggs of an average size. The breed can fly rather well and prefer perches if they get out they will nest high in trees.

"The tail feathering of the Ohiki should be very thick and full . The feathering is much like what is seen in the ancestry of the breed (the Onagadori) but most of the Ohiki do not have the NM (non-moulting) gene. and the tail consists of soft tail feathers. There are some lines that do show more Onagadori blood as they show the much longer tails.

ADDITION:
Origin: Japan.
I wrote up a standard based on the japanese standard which should be adhered to and additional notes noting the american variants and general deviations of type.

Comb: Single. additional note american line has Pea combs though they are less common.
combs should be large but not massive and should not fall. a fallen comb would be a fault.
earlobe: White and round (yellowing white while growing and molting can sometimes have a blue tint as they grow)

eyes: red brown other colors happen but are faults

Size: The ohiki is a true bantam which means there is no standard size counterpart though some are working on smaller ohiki (mini ohiki not to be confused with minohiki) they are all still bantam.
body: round not long and lean, possessing a cochin like carriage. wings however are not carried folded up like the cochin but are carried pointed down.
Lean or "long" body should be a disqualification

legs: clean without feathering, green. (creeper gene is not and should not be a part of this breed do not encourage breeding with the japanese bantam!) expect leg color to change a few times before reaching maturity ive had legs go from white to green to slate to green again. yellow legs are seen in barred and white birds.
leg feathering should be a disqualification. I would say that slate leg is a minor fault as its easier to correct than white or yellow legs which should be seen as a more serious fault. long legs should be a fault but not a disqualification

Beak: Short, stout at base, curving neatly to point.

tail: is at a 30 degree angle and drags behind and lacks hard (stiff) feathers, feathers are soft and bendable, lace like. hen tails are more of a bonnet or. "artichoke" shape. cocktail is not a trait of this breed and is seen primarily in phoenix and onagadori long tails. This breed does not have long stiff hard tail feathers they have a "soft" tail".
Tails can take up to 2 years to develop. Tails can range from 60-150 cm (22- 55 inches) in length. extreme lengths exist. again non molting genes can exist but do not believe it unless birds are tested.
Long feather growth may be associated with genes for extra feathering, so that some breeds, including the Ohiki, may have very full tails due to the presence of extra sickles and coverts.mutant feathers are expected.
Sparse or hard feathering should be seen as a disqualification as should cock tail in hens.

tails of the hen are bonnet and when looked at from behind appear to look like an "avocado" ~from longtail fowls book toni marie astin.

general: the breed has a cochin-like carriage with a distinctly raised round rump and wings carried down. when walking feet should not be completely or easily visible.


the tails of these birds can take awhile too mature so to best aid in tail growth try and feed game bird feed (minimum 20%), black oil sunflower seeds and provide perches and an area away from mud and dirt. to further aid in tail development in males separate from females and other birds and provide a fan in the warmer months.

the legs in this breed should be short and willow/green and it is important to note that the short legs are not from the creeper gene and that leg color can change drastically from hatching to becoming a fully fledged adult. ive had chicks hatch with white legs begin getting feathers with green legs a few weeks later getting slate legs and ending with green legs give them time to grow. Also if a chick has feathers on the leg it is a cull and should not be used for breeding and remember that "its easier to fix leg color than leg length"


though i have not had happen some times the breed can have issues with corn so if you see birds doing poorly try removing feed with corn.

i've head some people have had issues hatching eggs i will say if your having difficulty with chicks not being able to get out and suffocating once they have pipped the shell widen it slightly so the chick can get air then leave them alone.

I will say there are a lot of people these days not getting real Ohiki and there is a scam going around where people sell phoenix or crosses as Ohiki so please be well aware of the breed and its standard. 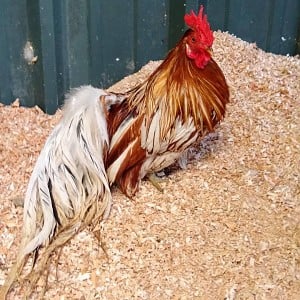 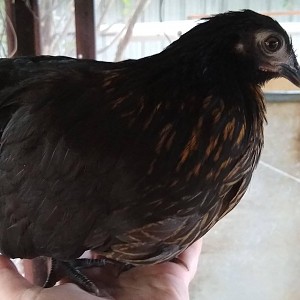 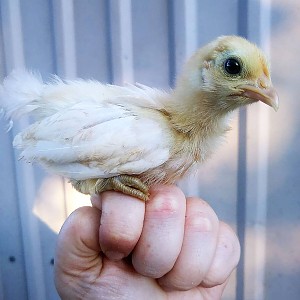 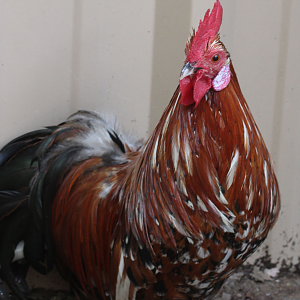 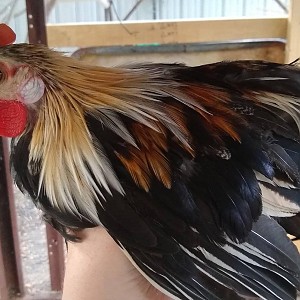 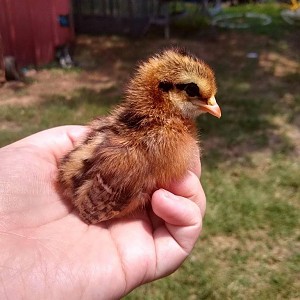 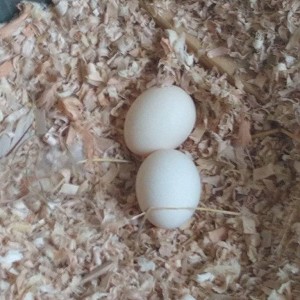 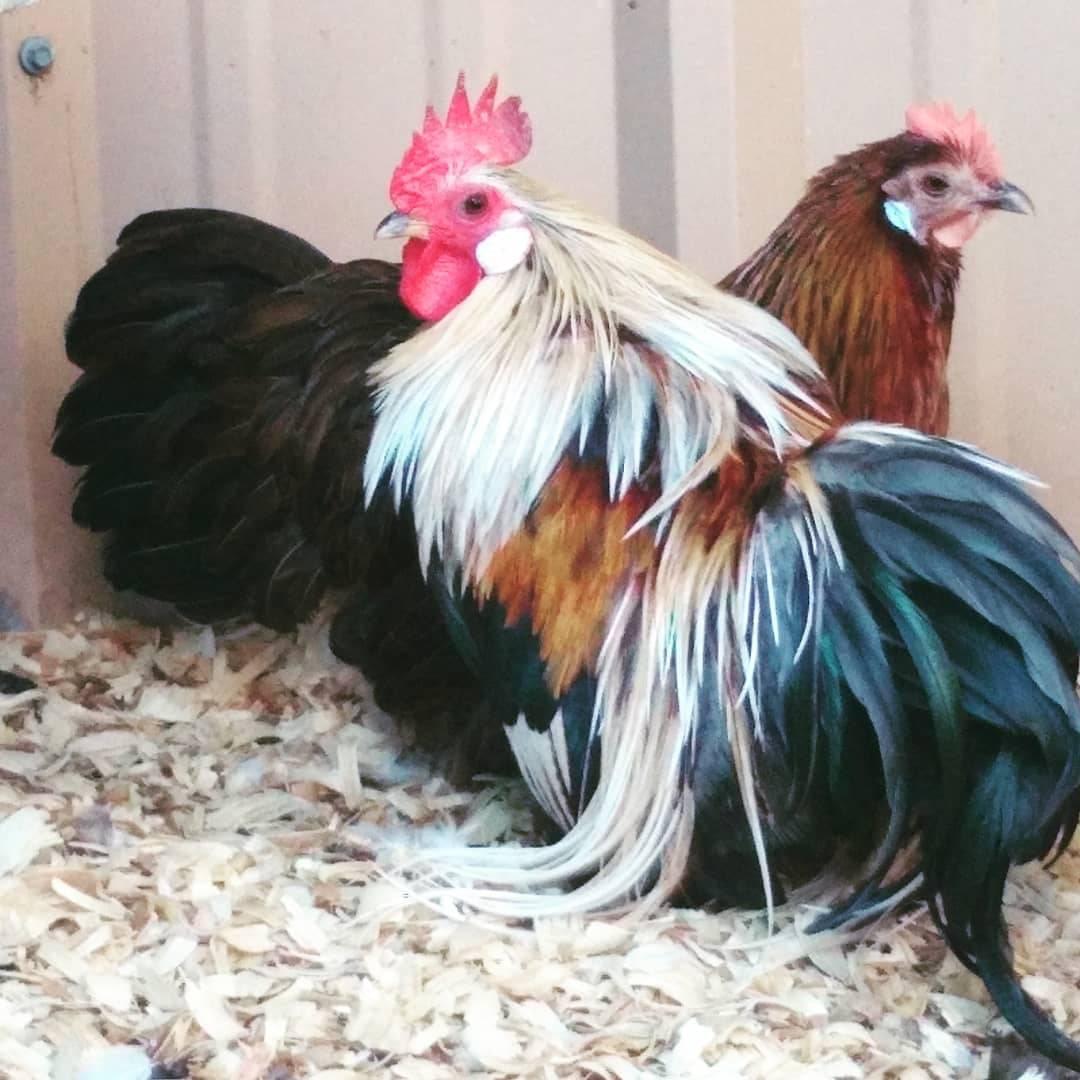 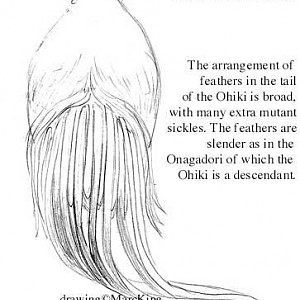 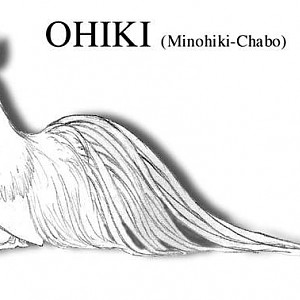 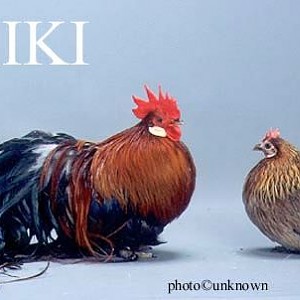 Great job
You must log in or register to reply here.