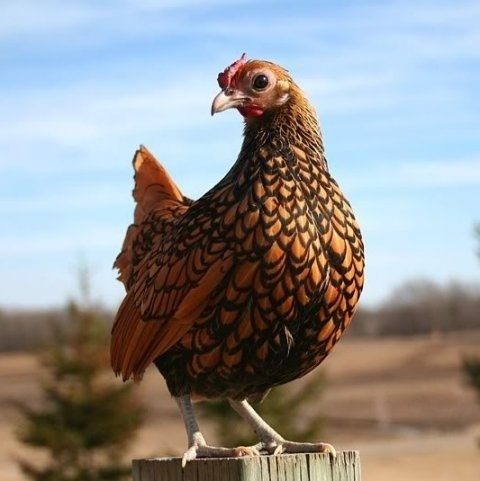 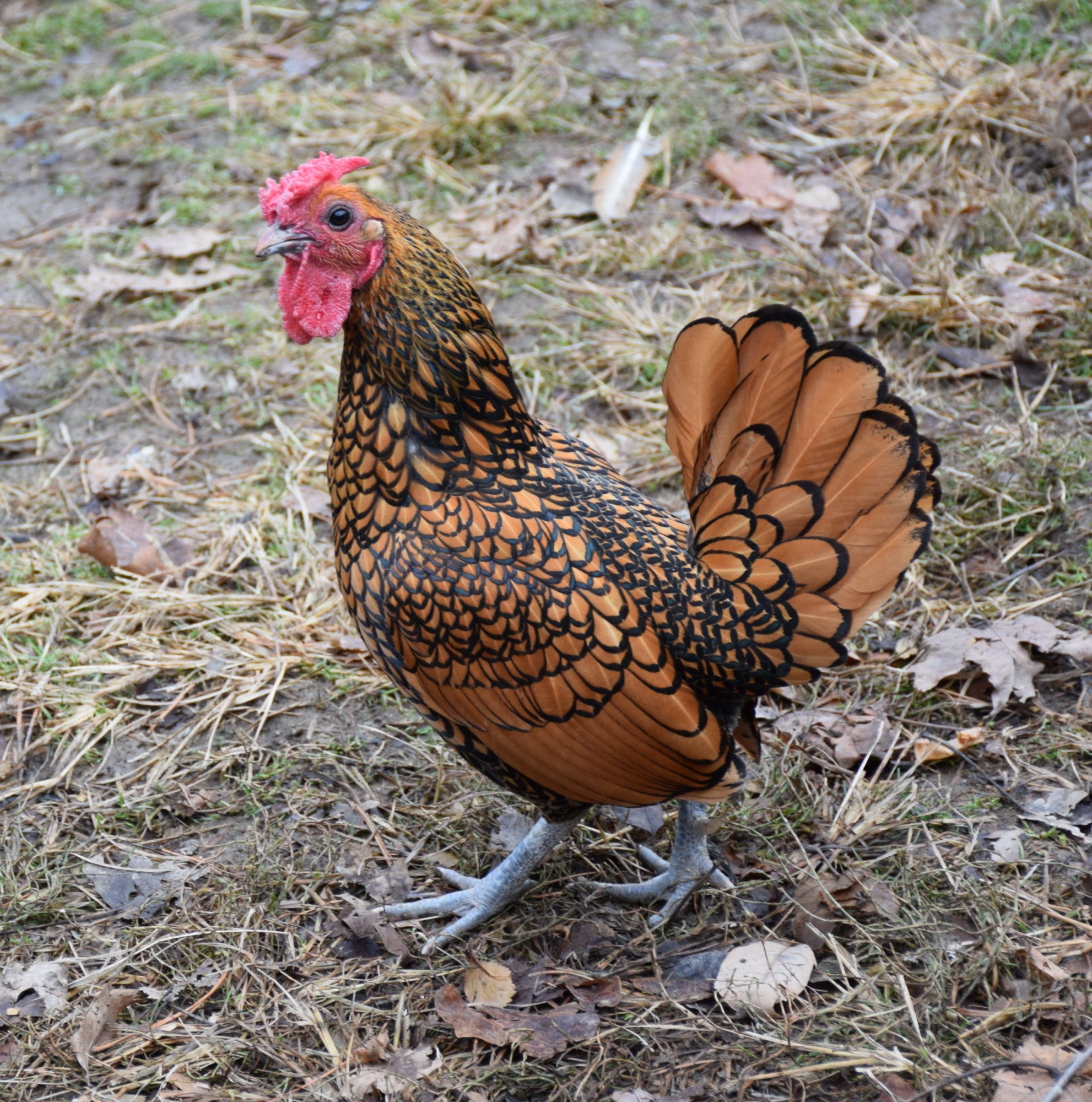 The Sebright is a very small, beautiful, rose-combed bantam, usually with laced feathers. They are a purely ornamental breed, very popular as pets and with hobbyists as show birds. While usually quite friendly with people, they are very active and very good flyers and need to be confined. Sebrights are a 'true' bantam, not coming in a standard sized variety.

The Sebright is named after its creator, Sir John Saunders Sebright, who established the breed around 1810 and went on to form it’s breed club, making the Sebright the first chicken breed to have its own breed club and the only breed named after an individual.

Breeds that went into the makeup for the Sebright are thought to include the Hamburgh, Nankin, Polish and Rosecombs. Sebrights are one of the few breeds in which the males are hen feathered, that is they do not have the long, sickle shaped saddle, neck and tail feathers. The mutation responsible for the hen feathering makes them difficult to breed. They come in a variety of colors with the two most popular colors being Gold and Silver Laced. 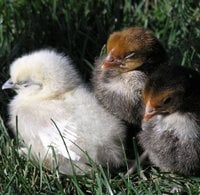 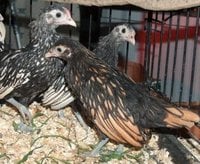 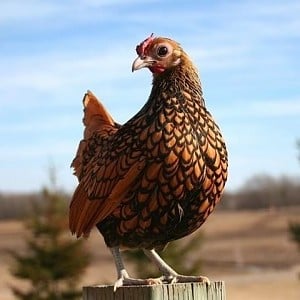 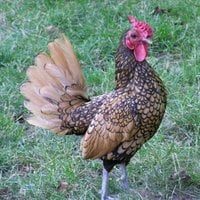 For more information on this breed and their owners' and breeders' experiences with them, see our breed discussion here: https://www.backyardchickens.com/threads/chicken-breed-focus-sebright.1016745/
Reactions: bantamsrmyfav, WannaBeHillBilly and BlackHackle
Share:
Reddit Pinterest Tumblr WhatsApp Email Link

Independent, strong, well adjusted, absolutely beautiful feather patterns!
Reactions: bantamsrmyfav and WannaBeHillBilly
Pros: They eat very little feed and will forage for days before hitting the feeder
Cons: Not prolific layers but mine laid better than I expected and the eggs are decent sized for the size of the bird.
Very attractive birds, very friendly too, pet quality friendly. They lay close to every other day, sometimes 2 days in a row. Rarely were mine at the feeders. The one I currently have will scratch out her pen before she goes to the feeder, and since I constantly add leaves, grass clippings, hay, straw everyday, I never see her at the feeder even when confined. She is sharing a pen with one D'uccle currently and the sea bright complete out lays the D'uccle. They tend to be do better free ranging and never leave the yard even though they are more than capable of flying out, or even walking under the Holly hedges. They will lay eggs in hiding spots when free ranging.
Reactions: bantamsrmyfav, WannaBeHillBilly and BlackHackle
Pros: Intelligent, Affectionate, Loves Attention, Comes when Called, and is comfortable with Showmanship.
Cons: She get's a little loud if I leave her alone for too long, also a bit skittish when frightened.
I have two sebrights now and they are definitely my favorite breed. Jewel, my favorite of the two, will come to the gate whenever she she's me and will come running if I say her name or are carrying some bread of any kind (she hates meal-worms but loves bread, whats with that?). She will get a little skittish if I scare her and has gone a little crazy when under extreme stress (in a hot, crowded building during fair week, for example), and she can fly really far (over 30 ft away from me at one point) but I raised her in a short cage and so she doesn't seem to know that she can fly that well. She's only an escape-artist if she sees me with bread. She absolutely loves to snuggle or just follow me around. She is also a part-time house chicken which can get pretty exciting at times (if she sees the cat). She also does not like being left alone and she will let out long screeches if she cannot see me or another chicken. But other than that she is my favorite of any chicken I have ever raised and she's defiantly not going to be the last sebright I ever own. The other one I didn't spend much time with as a chick and she's a bit more wild but she will let me hold her and can be as affectionate if I calm her down a bit before holding her.
Reactions: bantamsrmyfav and WannaBeHillBilly
Read more…

I love my tiny Sebrights. They are feisty with lots of personality. They are shy to strangers, but I have a few hens that perch on my shoulders and hands.
They are beautiful and a breed I'd like to enjoy someday.
I've always wanted a Sebright.... Don't rub it in! LOLZ

your sebrights are BEAUTIFUL! I have to have one!
I have 5 sebright hens and they are all a joy! Mine love to be cuddled too and are first to come running up to me if they get pecked like their almost tattling on the one who pecked them, it's so cute! Sorry about your hen's passing, my sebright rooster sammy died from a respiratory infection too and we got to him to late. Wouldn't trade anything for my girls!
I'm sorry about your little guy. They are so darn lovable, and boy, do they tattle! We were able to save Lacey for 21/2 more years after we got her. It was touch and go at times, but this last bout was so severe that her heart just gave out. Our little Missy was with her keeping her company, and I swear, she was upset as we were. If chickens can be intelligent, these sure are and I'll always want at least one just for their company.
She is SO cute! I just love them and their cheekiness!
Don't you just LOVE their personalities!
Everyone loves their chickens! Happy Valentines Peeps!
She is a beautiful chicken! I love the black and white of her feathers.
Heheh your right about the cat thing....my golden laced once got nicked by a cat however said chicken was ok and was returned to me with no problems or issues. I think the fact i have handled my seabrights regulary and are in a mixed flock has helped. This said the seabrights are the real bullies of the flock. Love them thought
ohhhh also if you look at the photos of the seabrights , ive put a pic up of my girls roosting on my arm
We have a couple of bantam Golden Sebright girls and a cock. The girls are very sweet and calm and lay better than our Ameraucanas but the cock is a feisty guy! He attacks us whenever we get near. Luckily he's just little! He has bruised my shins, though. I love the way the Sebrights stand so upright with their wings held low. Absolutely beautiful! We also have a bantam Mille Fleur d'Uccle cock and he and the Sebright cock get along just dandy.
There was a kid there who was trying to sex them & said he thought it was a cock. Hasn't shown any signs of it yet though! The few cocks (different breeds) that we definitely did have were taken out by the dog

I used to be a keeper in a childrens zoo & our cock there was very mean to nearly everyone but took a liking to me. Hopefully the ones in our own "zoo" will too, lol!
Oohh!! She's pretty! In the pic she looks like a bantam gold-laced wyanadotte. Am I right?
I THINK SHE SO CUTE BUT I RLY DONT LIKE ROSE GOMES ONLY SINGLES BUT I STILL LOVE
I totally agree with your description...I have a Golden Sebright Roo, one of our favorites.....he is exactly as described, and ooohhhh soooo cute! He thinks he is an LF roo!
I have one female golden sebright and she is very nervous but have been able to tame somewhat. I think she is beautiful and will be looking for a male compaion for her.
How do they defend themself from other animal.
You must log in or register to reply here.