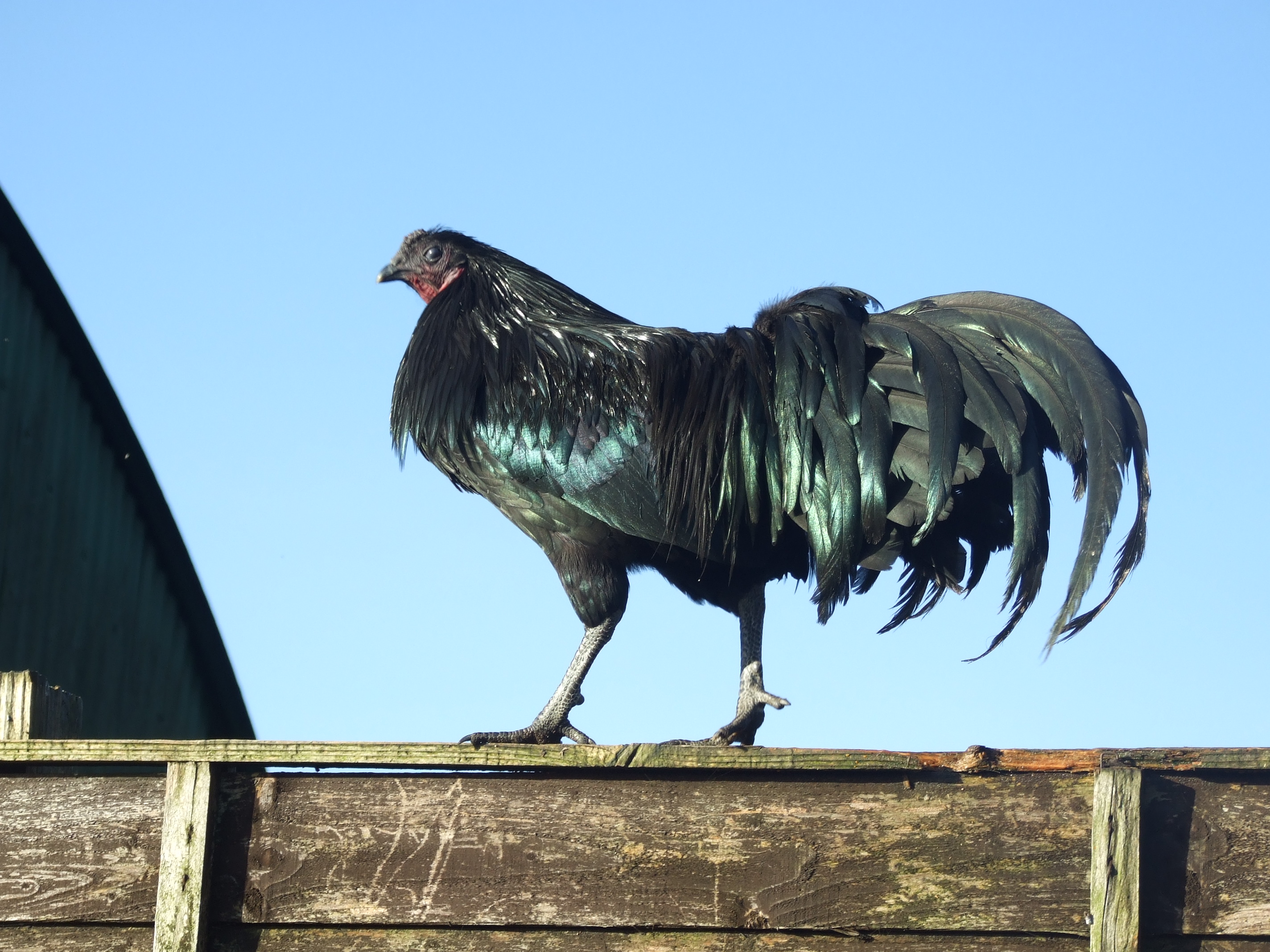 Breed Colors/Varieties
Black is the only color admitted into the standard but other colors are available. 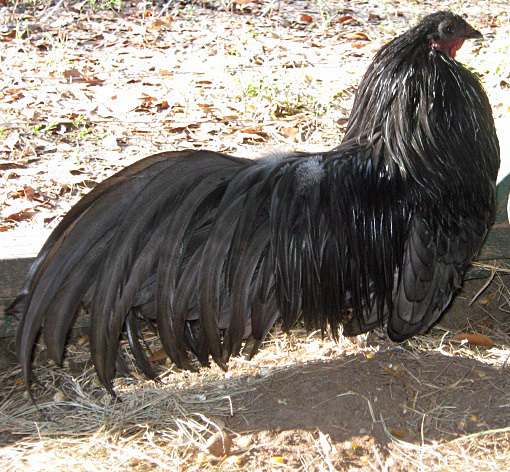 The Sumatra breed is a native of the island of Sumatra in Indonesia. They were originally imported from Sumatra in 1847 to the U.S. and Europe for the purpose of cockfighting, but today the breed is primarily kept for exhibition. Sumatras are primarily an ornamental breed kept for their attractive plumage. Most often they are a lustrous black with a green sheen throughout the body and tail. The breed comes in blue and white varieties, as well as the unstandardised splash - a natural result of breeding blue chickens.

The Black Sumatra was admitted to the APA Standard in 1883.

The Black Sumatra is a rare and beautiful Asian long tail chicken with rich lustrous beetle green plumage. It originally was inported from Sumatra for cockfighting, but is now exclusively an ornamental fowl.

The Sumatra has a personality closer to that of a wild game bird than a domestic chicken. The male has a graceful carriage and lustrous greenish black feathers. The cock should have a long sweeping tail, with an abundance of long sweeping sickles and coverts, carried horizontally (females tail carriage 15 degrees above horizontal).

Multiple spurs on males are desired as well as practically no wattle development. Comb and wattles are expected to be a gypsy (purplish-black) color, while their skin is yellow. Shanks should be black with the bottom of the feet being yellow.

They are fair layers of medium size white or light tint egg. 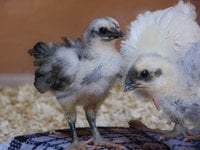 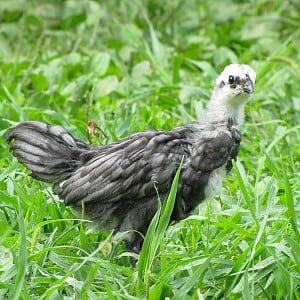 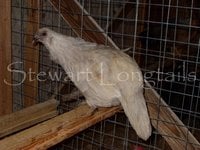 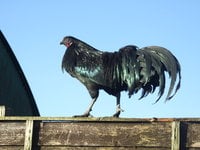 Pros: Hens are reliable near daily layers first year and overwinter, after 18 months they stop in winter. Frequently Broody. Roosters are pure eye candy! Predator avoidance hen or roo.
Cons: Frequently Broody. Even if you get a cockerel past the hormonal period watch out for him in the spring as that sweet boy may turn quickly on you. Cockerels are unruly.
We have been keeping Sumatra since 2017 and ran my first flock purely as free rangers once they hit the 2.5 month grow out phase. All cockerels got themselves culled by my intolerance of their behavior. Our 2018 batch is still with us one hen culled her self from the flock by apparently harassing the dogs(being a recently broken broody) in the wrong part of the yard and was sent packing. This batch had only one cockerel survive he was culled in Spring 2019 during the breeding season for spurring/scarring me between the eyes at the PM feeding time. I still like the breed but think I might hatch out a small batch of Ayam Cemani and mix them as I love black lusterous feathers in sunlight. I am not overly concerned about keeping my lines clean vs actually having roosters I do not need to always cull out.
Reactions: PioneerChicks and AyamSiriusBlack
Pros: Beautiful. Very good broodys. Very good table fowl.
Cons: Can be flighty. Can be aggressive.
I've raised Large Fowl Black Sumatras for over 15 years. If you can get over the flightiness and low egg count they are the best birds. Absolutely beautiful birds, they shine like emeralds in the sun. They are fairly quiet birds. Very productive setting hens. They will set multiple times a year and hatch most of their eggs. Their dark faces, multiple spurs, and long tails can not be found in any other breed. Some evidence points to Sumatras being one of the original breeds of chickens same as in Red Junglefowl. I butcher old hens and young cockerels every year. And they are very good table fowl. They taste how chicken is suppose to taste. Egg count is low in Sumatras, but I don't know anybody who raises Sumatras just for the eggs. Roosters can be very aggressive. But its not all that common in my experience. In 15 plus years I can only remember one rooster I would have called aggressive.
Reactions: NarratedByChickens and AllenK RGV

MysteryChicken
I have a Sumatra cockerel, & he's the most snuggly bird I have besides Silkies.
Other genetic studies shown that Sumatras are the ancestor of Silkie Chickens.
Read more…

I am getting hatching eggs this spring. I am hedging my bets that they will be wily enough to survive free ranging here in the high desert. I am also hearing they are very very good broodies which is also what I want to use them for.
My biggest fear of letting my chickens free range is the hawk I see hunting the wild california quail andwild rabbits that live on my property,
I have two Sumutra hens and they make awsome mama's

Some Sumatra's lay at 8 months old, and some lay next year!
that is true I have a male that has done really well but he has a light face because I keep him in a lot
Love the names! LOL!
they are very friendly ! we have 3 babies ...They will fly up to my shoulder .not sure if they are roos or girls yet .
sounds like you need some girls ..
I love Johnny Cash! That name is so perfect for a rooster!
I got a dozen eggs via ebay when I was still using a styrofoam incubator. I set them with eggs from my own bantams and only one of them successfully hatched. I raised "Emma" with the bantams, even though she was a large fowl Sumatra. She became their guardian when I allowed them out to free range. She would stand up to my wife's dominant large fowl layer hen, using a very karate-like sweep move on her that would leave my mouth hanging open. She also made vocalizations I've not heard from any other breed, although it's hard to tell if those were unique to Sumatras, or just Emma.

I lost her when she develop a tumor at the base of one of her wings. I'll have to try Sumatras again sometime if I ever have room.
Updated.. I actually had one hen, go broody twice last year! Hatched out 2 clutches for me and was a really good mom!
This is on my must get breeds list.
I wonder if she is hiding her eggs, but maybe that's not possible
no she layed her first and last egg at 34 weeks sadly hellion attacked her, broke her femur and we had to put her down
so very pretty
Nice review. I love her name "Kevin"!
so why wouldn't you have culled the very "nasty" to his hens roo?? just wondering since you culled all the mean d"Anvers?? Not judging just curious.
Haha, he was my only Sumatra male. Nothing else to compare to or choose from.
At the time, anyway. He only lasted through this last breeding season. But his babies are coming of age now and they are turning. It is probably just the strain I got, but I do not cull myself out of options.
That said, a few of them have not attacked me yet, and most of the young boys are fine to their females. But the young boys are pretty hard on each other. I've had to individually pen most of them, or keep them with d'Anvers boys. They tend to get along with d'Anvers boys. Just overall I have raised one breed for a long time and my line has pretty much evolved along with me for the last several years - and getting used to the new behavior tendencies the Sumatras have introduced has been a difficult adjustment for me.
ok I was wondering thankyou for explaining I totally get not loosing all you options. Good luck with breeding niceness into them.