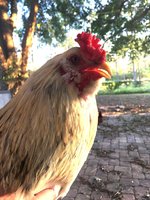 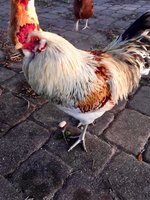 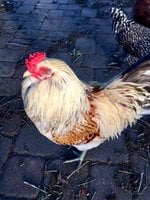 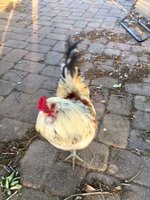 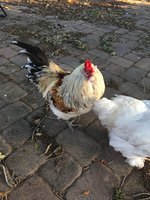 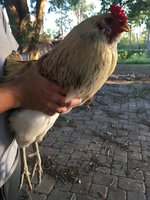 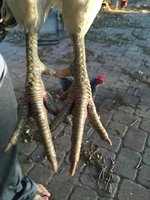 Hi there, we are looking to find a new home for our rooster “Bird Person”. He is 1 year old in April. We raised him from a chick purchased at a feed store in Orlando with Purina signage advertising them as actual Ameracaunas (rumpless photo and all), but I’m pretty sure he and the hen from the same batch are Americanas/Easter Eggers (not rumpless obviously lol). He is usually good with our 6 hens but does pick on our RIR after his favorite hen passed away, like chasing her away and pecking, not trying to mate. Otherwise he seems to point out food to them while foraging and is protective, having killed a rat and always warns them or anything out of the ordinary.

He is beautiful and if we had a separate area besides the backyard fenced off for the run we would probably keep him, but we weren’t planning on a rooster and unfortunately after I raised him from a chick he now thinks I am a threat and sometimes gives me a hard time when I go in the back yard. Plus the little RIR gets enough grief from most of the other hens that his attitude towards her is just too much. As far as roosters go I know he could be a LOT more aggressive, and we will miss watching him patrol the yard, but for me personally I just want to have my yard back without looking over my shoulder. He hasn’t injured me and his spurs aren’t sharp yet, more just scares me when he goes after my ankles when I’m wearing shorts! I’m just a wimp so I don’t hang out there with my hens anymore

. My husband can pick him up (not willing but can be caught) and once he is holding him he seems to be still.

We are hoping someone will want him for their flock as he is a good rooster rather than just eat him! Not sure if they are actually related since they were just in a small batch at a feed store, but his “sister” is a very productive layer of blue-green eggs so maybe he could breed for blue eggs.
Share:
Reddit Pinterest Tumblr WhatsApp Email Share Link