I couldn't believe it! My first seven guinea eggs that I incubated hatched 7/7! I was worried none would hatch because I wasn't sure my humidity was perfect.

Five hatched great one their own (one a day early, and hes huge). One needed slight assistance, he pipped, but seemed to quit, so after 20 hours I gave him a bigger air hole and he busted out of the egg within an hour. Egg #7 had the biggest struggle. She pipped last (about 6 hours after #6) and then that was it. After 20 hours, I could hear her chirping, but she hadn't made any progress. I made her an air hole and put the egg back, a few hours later still nothing. So I peeled back more the egg and waiting. A few hours later, she was still peeping but made no progress so my husband and I hatched her. I wasn't sure she would make it, but the next morning she looked okay. I left her in incubator another day because she was weak and I knew the first six would pick on her. I am happy to say shes doing great! Her toes are kind of turned in, I've looked up many ways to try and fix them, but am nervous to try on my own. My farm vet is coming tonight to ultrasound a horse, so I may ask her for advice.

But overall, I am so excited, I never ever thought I'd go 7/7 on my first hatch! I've got another dozen due Monday and a dozen due at the end of month. Hoping for more great results.

The photo is four of the six. I have four light gray and three brownish ones so far. Any idea on what their adult colors will be ( i got these eggs from a friend, not my own stock). 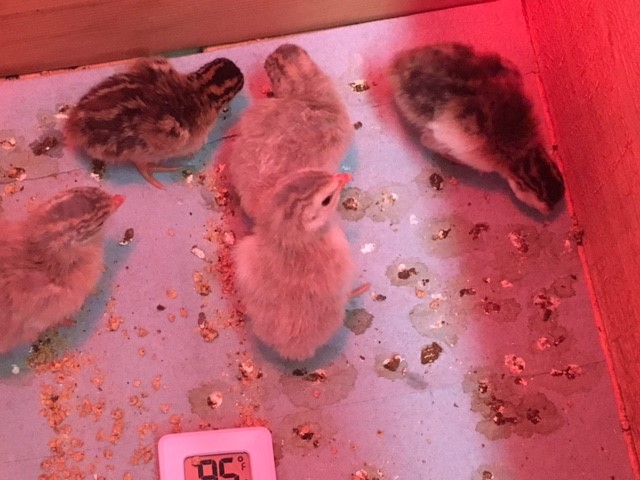 Nice, I have never had Guineas before and might in the future! Congratulations, enjoy!

J
Help my chick that pipped on the wrong end?