I have 8 baby chicks that my Easter egger chickens hatched there self. Two are 3 days old the rest are a week old but, The 2 that are 3 days old seem to not be able to walk and there feet look broken.How did this happen? it seems the two hatched this way.I was wondering is there anything i can do to help them. I have a picture of all the chicks together just click the file called archive below.There is 2 pictures of all of them.

I really can't see much of anything in this picture, the chicks are too far away in the first one and in the second I can't really see the chicks with the issue.

In the first one though it looks like two chicks in it have splayed leg, is that what you mean? Where their legs go off to the side and they can't walk? If that's what you mean, that can be easily corrected by putting them in hobbles. I recommend vet wrap to make the hobbles but bandaids will work too.

Here's what I mean by hobbles: 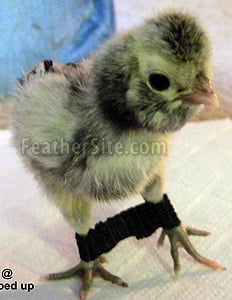 It was probably caused because I can see in your pictures where your shavings are not deep enough to cover the slippery tarp you have underneath them. If a chick ended up on one of these areas and didn't have traction, which it wouldn't, then it would develop splay leg.

Thanks for your help i will send you a picture of them tomorrow.It is night so it was hard to take.They were born with there feet like that.I have read also that plastic is bad for there feet but the chicks keep moving it i keep adding more if there is more needed.

They can hatch with it too, so that is a possibility! But it's easy enough to correct as long as you do it quickly. You have to catch it in the first few days before their bones finish hardening and they set like that, so I'd get the hobbles on ASAP

Pyxis said:
Here's what I mean by hobbles:
Click to expand...

They are three days old does that change anything?I will send pictures tomorrow its just to dark out now.

Yes, you can still do it, but make sure you do it quick! I'd recommend starting them tonight.

how do you do it you tie it on.

Vet wrap sticks to itself, so you just cut a piece long enough to go around the legs to hold them in the correct position, wrap it around, and it'll stick to itself and hold them in place. Doesn't stick to the legs like a band-aid would so it's much nicer in that regard.

Yep. Get that hobble on ASAP.

That plastic's pretty bad for them. If you put enough substrate on top, they'll generally not scratch it all the way down to the slick surface.

It's a nasty cleanup, but towels do really well for developing legs, provided, and this is very important, that you do not provide towels with holes or pulls in them. Holes and pulls will catch the chickie's little legs and cause more problems.

M
Splay leg or slipped tendon? How to treat…