2 drakes and a hen

I had a flock of three drakes. After 7 years, a racoon got into their pen and killed two out of the three. We went and bought two hen ducklings. --or so we thought-- It is beginning to look like one of the hens might be a drake.
Does the fact that they were nest mates matter? I've seen some interesting unexpected animal behavior over the years. Has anyone seen this work out when the numbers are "wrong"??
Has anyone ever successfully kept a duck flock with more drakes than ducks, or same number of drakes as ducks?
Or do you feel I need to immediately dispose of the new drake, or get additional hens?
I still need time to pass to confirm that this is not a hen, but bill color is pale and there is a slight tail curl developing -- but the voice sounds like a hen, not a drake.
(Australian spotted)
Thanks for your feedback!
Can drakes be "fixed" like chickens?
L

Even if the new ones were both hens, the ratio was probably *still* wrong. Its rare for domestic ducks to do the "mating pair" thing, drakes can commonly get too aggressive on less than 4 hens and those 4 have to be exclusively his, not shared with another drake. You can re-home your girl or get 7+ more girls.

Since we're headed into winter I'd say take care of the gender imbalance ASAP so you have the chance to actually find the new duck(s) and they have time to get used to each other before spring mating drives them crazy.

I'd also look for ducks of a similar age or larger breed than your existing male so he doesnt overpower them.
D

I appreciate your interest in posting a reply. Thank-you. I also notice that this is the first year you have ever cared for ducks. How many do you have?
D 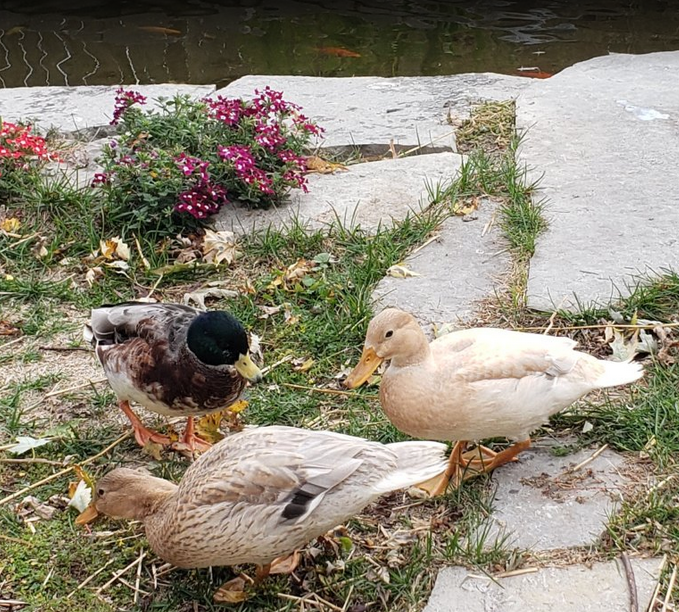 Waiting for the gender reveal.... the duck on the right is in question.

EDIT: A seven year old drake is not at all the same as a two or three year old drake. He probably has two or three years of life left in him. The greenhead came from Dave Holderead before he retired.
In doing a little more checking, I learned that you can also "light neuter" a drake who is too aggressive by putting him in the dark for long periods of the day for a few days. [Storeys Guide to Raising Ducks] Basically doing the opposite of what you do to try to keep hens laying for longer in a season.
I have the ability and motivation to keep all of the animals and separate them if I need to but I enjoy free-ranging them in my yard and pond.
Last edited: Oct 14, 2020

Agressive Drake Toward One Duck

How determine the gender - the hen or the drake?