It is April again and that means time for my local county fair. You folks who have been around a while may recall I put up a chick hatching display for the fair last year and the year before. This year's display is a great improvement over previous efforts with a new hatcher and brooder. A few new additional posters as well.

This is the exhibit set up and ready to go in the livestock tent on Thursday morning before fair open. 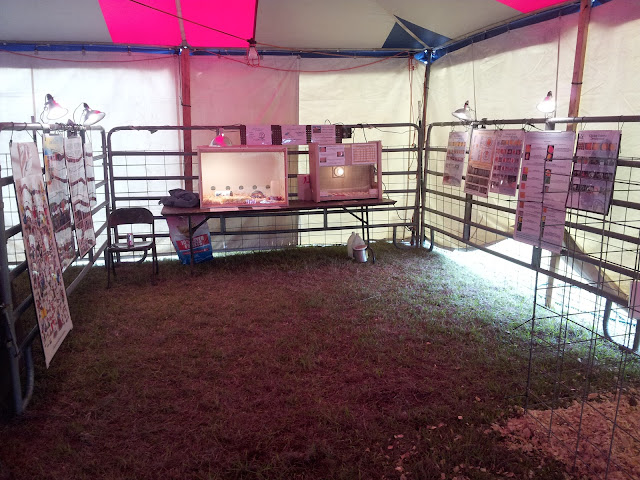 I bring the hatcher and brooder over the night before so they can warm up and stabilize before I bring the eggs the morning the fair opens.

The heart of the thing is of course the hatcher. 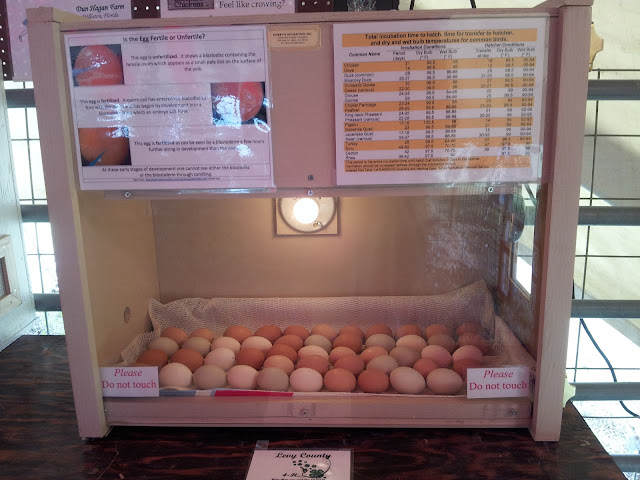 A great improvement over the picture window Hovabator I started out with originally. A light inside the box makes it possible to easily see what is going on inside, especially at night when the overhead lighting would otherwise cause glare problems. Much better temperature and humidity control as well.

The other important part is the brooder: 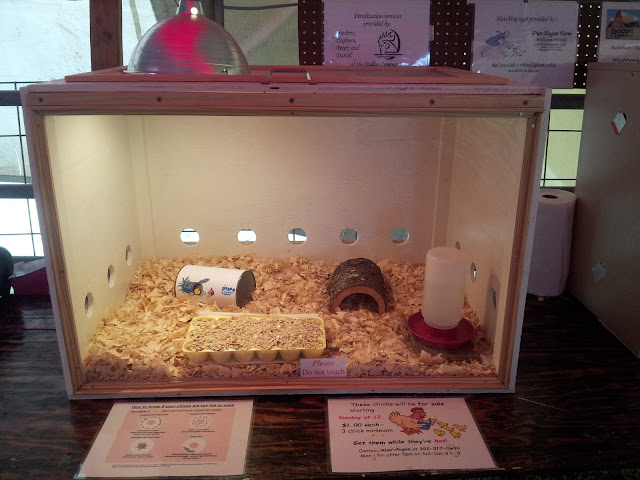 It is not entirely finished. I was so short on time that I had to get it to a point that it could be used and I will do the finishing work later. I made it tall that the little kids would not have to stand on tip-toes nor would the adults have to stoop to see in. A lot better than the plastic tub with hardware cloth of the first two years.

A close-up of the two together: 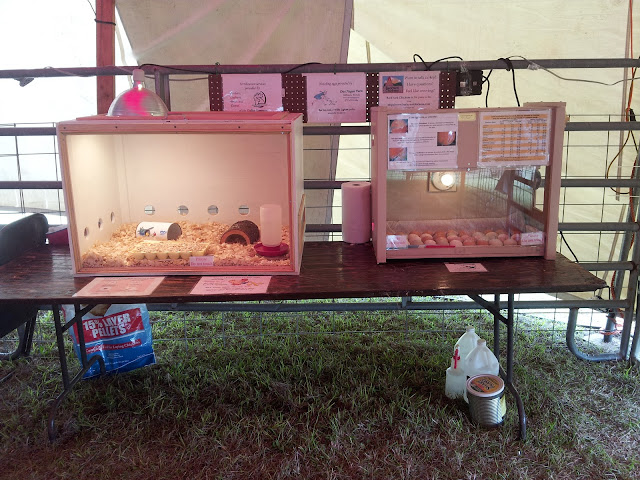 Yes, that's a Backyard Chickens flier I created on the panel behind the hatcher.

The display materials include day by day developmental photos of chicken, pheasant, and Bobwhite quail eggs, egg anatomy and how to choose good hatching eggs, and a breakout analysis of good and bad eggs. 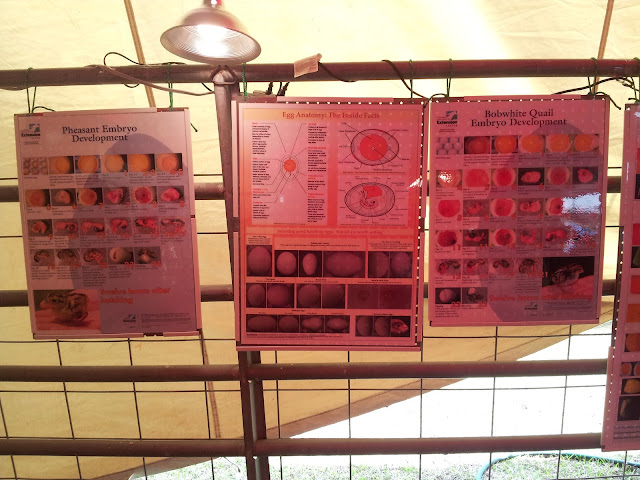 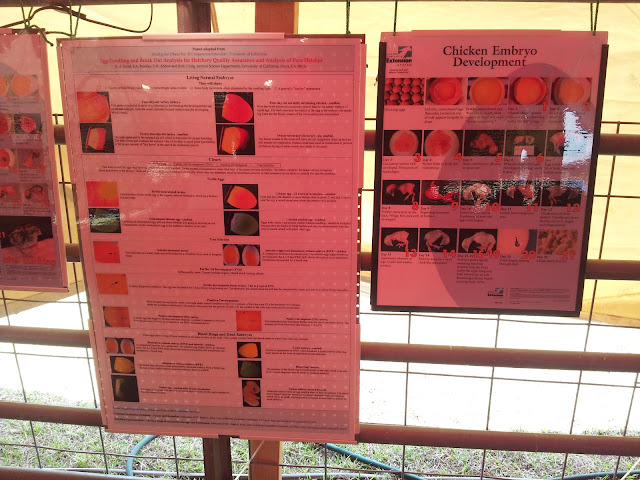 On the other side is the fun stuff: 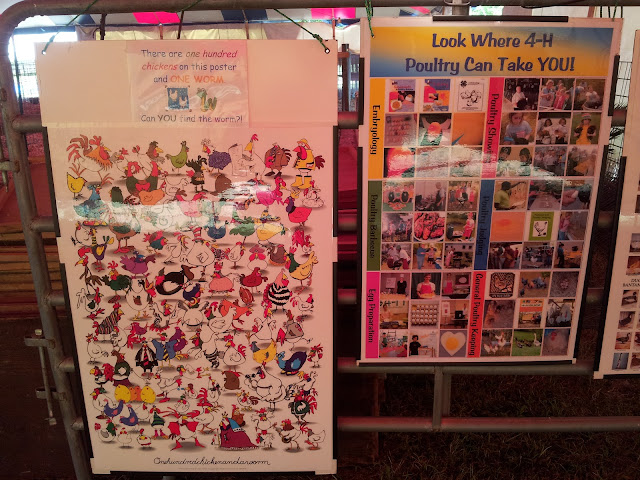 That is the "One Hundreds Chickens & a Worm" poster from last year and a new 4-H poultry related activities poster I made for this year.

This one has the APA breeds chart and a chick embryo development poster from their classroom embryology unit. 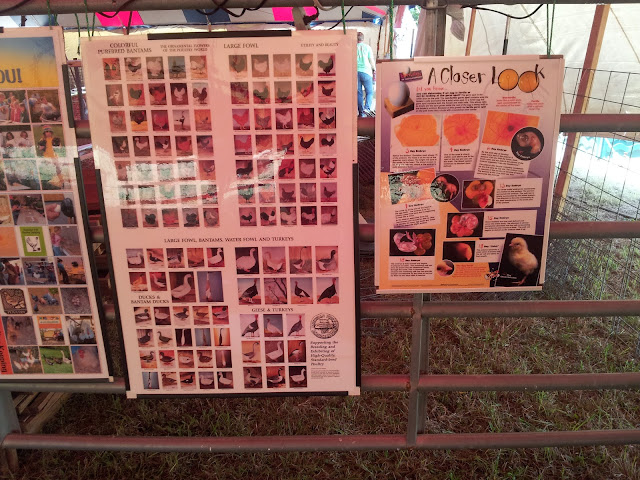 The board across the back behind the hatcher and brooder has the Backyard Chickens sign, one advertising my farm, and a bit of humor concerning the fertilization services provided by the Gallus Company.

Once everything was set up there was nothing left to do but wait on the fair to open and the first chicks to hatch. In fact the first egg was already pipping when I took them out of the box at the house to bring them to the fairgrounds. But even using a pre-heated cooler moving them eight miles slowed them down so it was late that night before the first one popped out. I can tell you the day they will hatch, but only the chicks themselves know the hour and they are not very punctual!

They did eventually decide to grace us with their presence and the show was on. 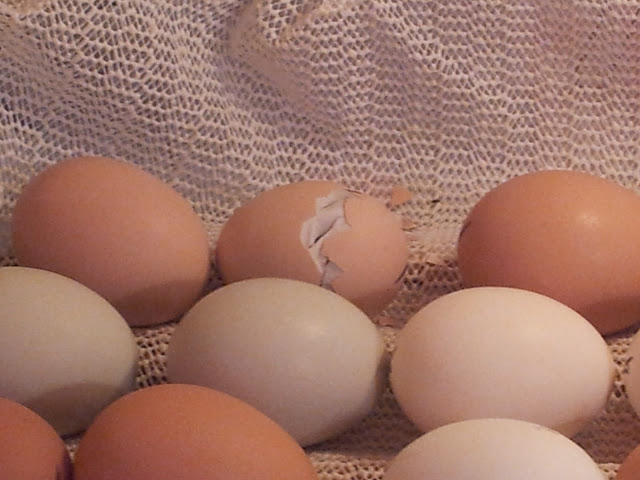 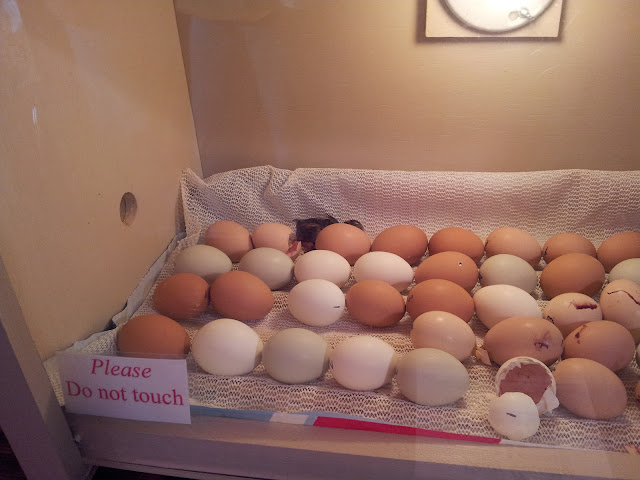 Once a few had hatched and a couple had been moved into the brooder the traffic flow in the livestock tent began to increase. 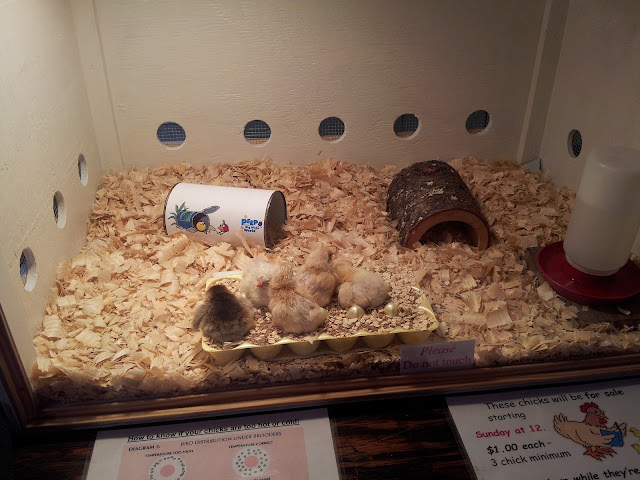 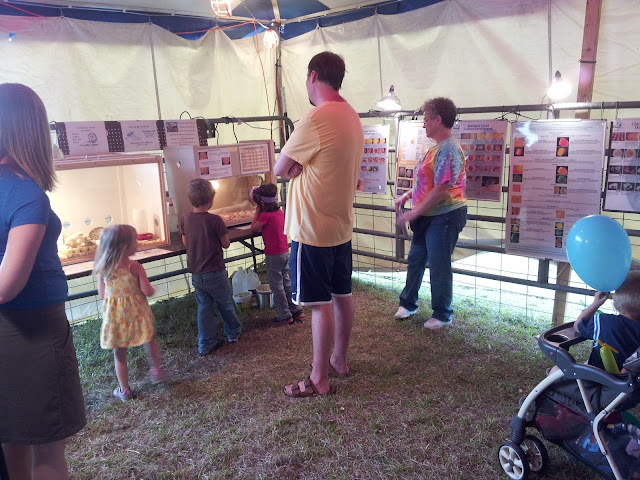 Every time a chick had pipped, zipped, and was about ready to pop out word would go around and the kids would come running. They cheered every one of them on. 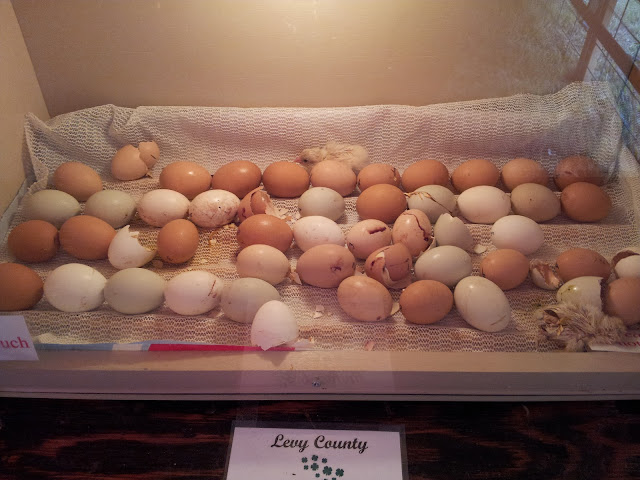 Of course the cute fuzzy ones in the brooder drew some attention as well. 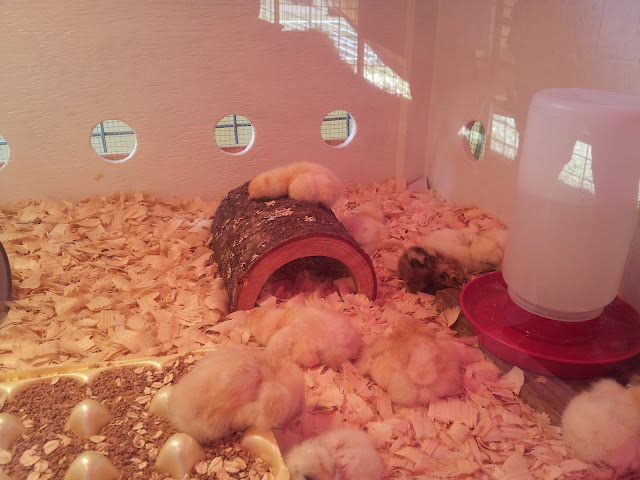 Saturday night after dark when the midway really began to hop it got busy. 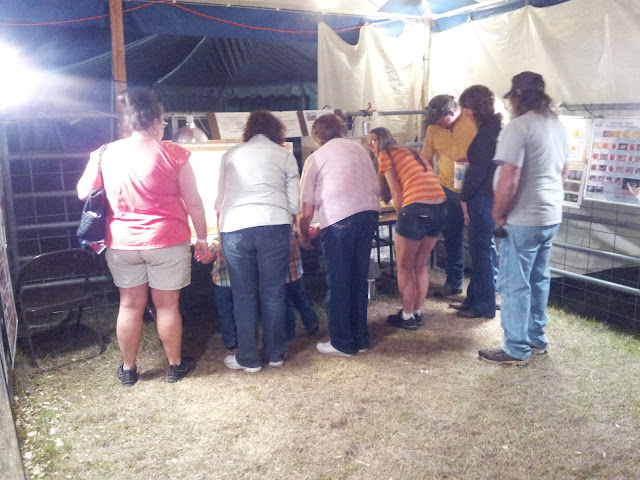 They would come in to see who was hatching and who was in the brooder, but then they'd have to find the worm. 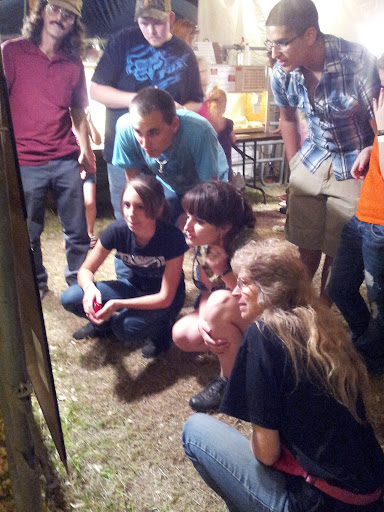 And they would often study the developmental posters. 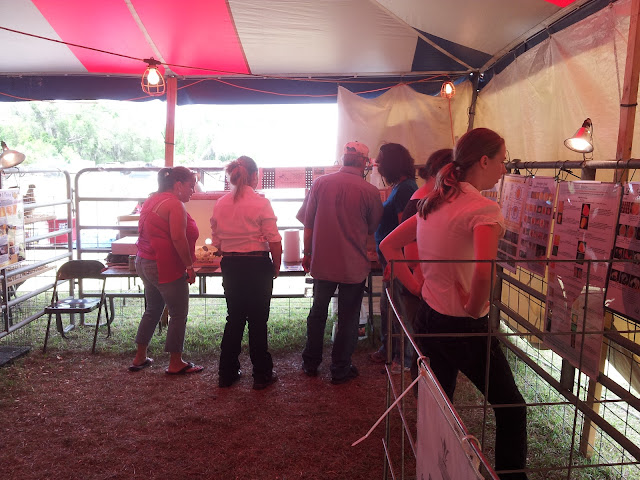 I can't stay with the display the entire time the fair is open over four days so I don't know how many actually came in to see it. I can say that several hundred did on Saturday night and of course during the day Saturday and Sunday when the livestock competitions are going on the kids spend a lot of time with it. Between the poultry, rabbits, goats, heifers, and steers the kids were showing, and the miniature zebu show that was happening on the other side of the tent as well as the sheep, myotonic (fainters) goats, and hatching display the livestock tent was CROWDED this year. They added an arena tent this time, but for next year they're going to have to add another tent as well. Our little fair is starting to take off nicely.

If you would like to see more photos you can check out the gallery I set up of this year's display at: https://picasaweb.google.com/114526313543006840157/2013LevyCountyFairChickHatchingDisplay#

Here are links to the previous hatching displays:

I hope you all enjoyed the photos.

Thanks! It gets a little better each year. This one was the "great leap forward" so far as the hatcher/brooder was concerned.

Next year we're hoping to add a chick petting zoo if I can persuade a few of the 4-H kids to man it when I'm not there to keep an eye on things.

Bobby's chicks! We did it!!

How long can chicks stay in incubator?
2