I incubated several of my Mille Fleur d'Uccle's eggs and Chester is the only one that hatched. She is 8 weeks old now. She was born with twisted toes and has always had trouble walking and we tried to correct them with tape and cardboard but it seemed like it was doing more harm than good so we stopped after a week. She has been strong and healthy from birth btw other than deformities with feet. Her toes curled under a little more but weren't cutting into her the next couple weeks. Three weeks ago, her legs started to splay and she couldn't stand up so I took her to a chicken vet down the street 2.5 weeks ago and she gave us tape and instructions to tighten the play in the tape every two days a little bit which is what we've been doing, but the tape stretches out quickly and she's been getting the tape and legs caught on stuff and screaming until we move her and this week, her foot just got worse and is now perpendicular to her body and the joint is very swollen so we took the tape off because it doesn't seem like it was helping at all and was hurting her. she flies a little bit to help her get from place to place but although her weight is good now, her crop was empty today and I'm worried she won't be able to get food and water. She did better in short grass and dirt getting around. But still can't actually stand up. The other chickens don't bother her or Peck her at all and don't shun her either. She was on chicken wire her first couple days then moved to paper towels on cardboard for a couple of weeks then to puppy pads then mainly on dirt and very short grass outside (except comes inside to sleep) with 4 other chickens 2.5 weeks older than her. My question is what can I do? I keep my chickens as pets. She's a strong little girl but I don't want her to be in pain or starve. Please help me- I am willing to modify her environment to help her succeed. She's the one sitting in the grass in the middle on last photo. 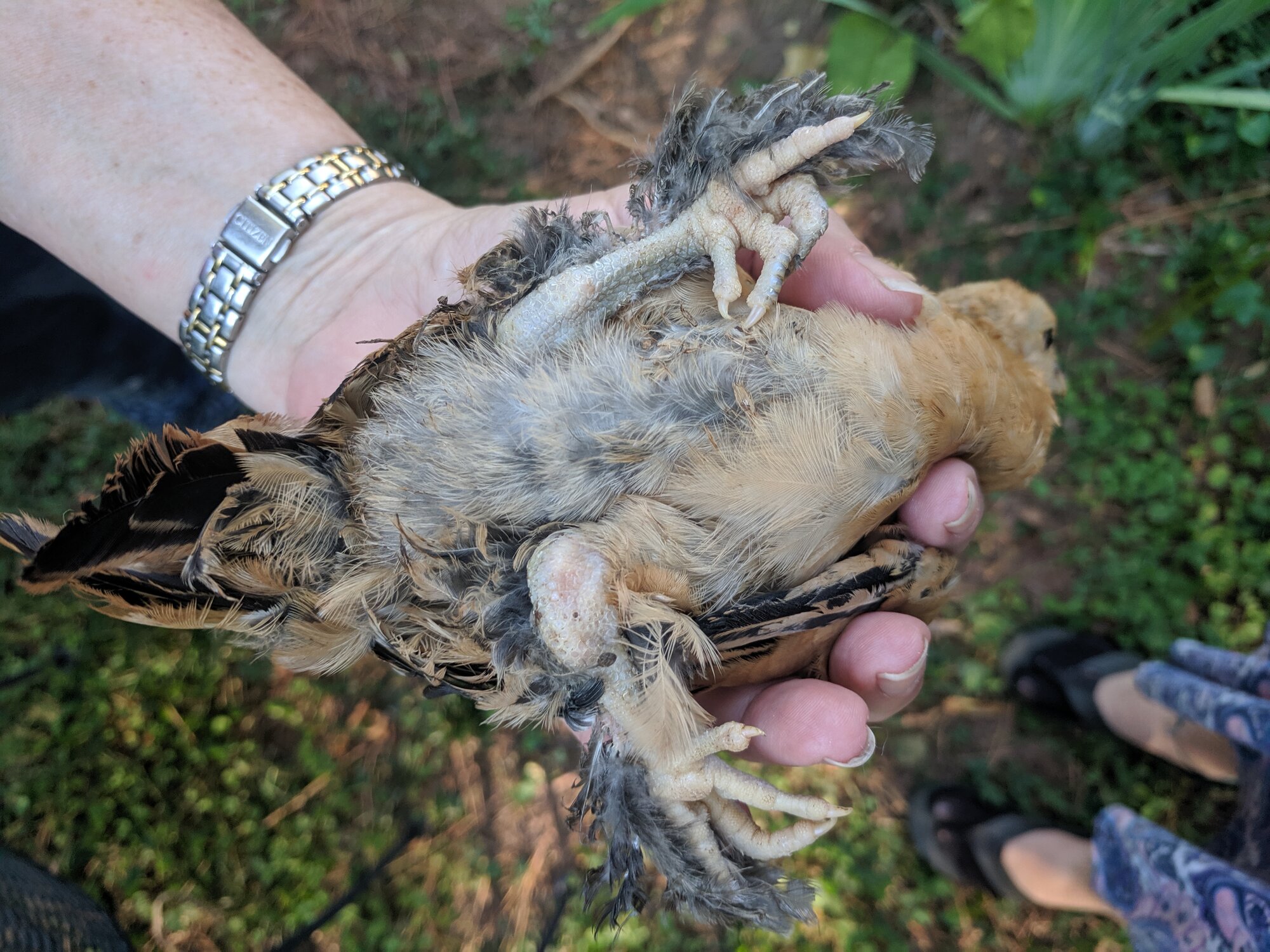 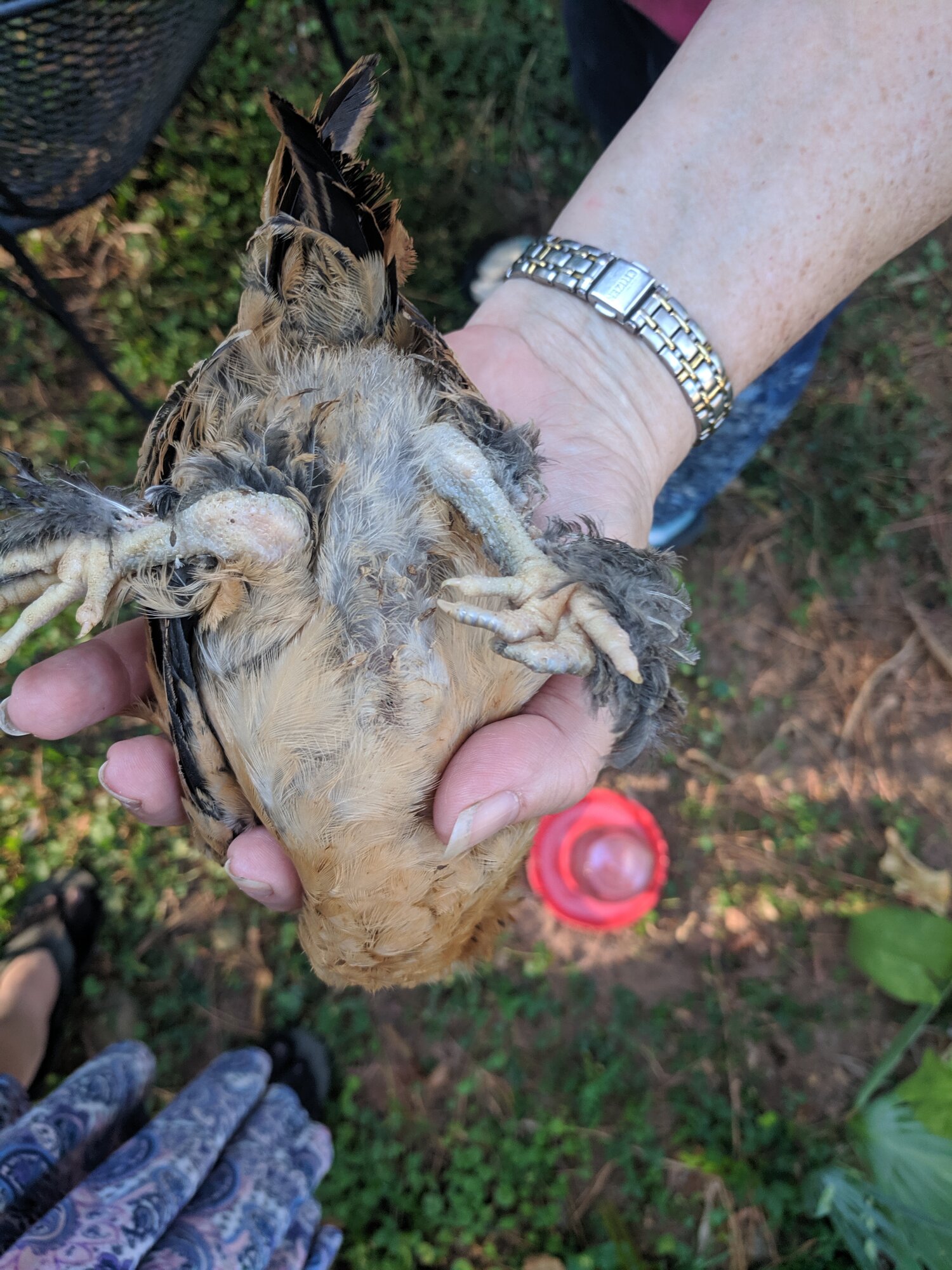 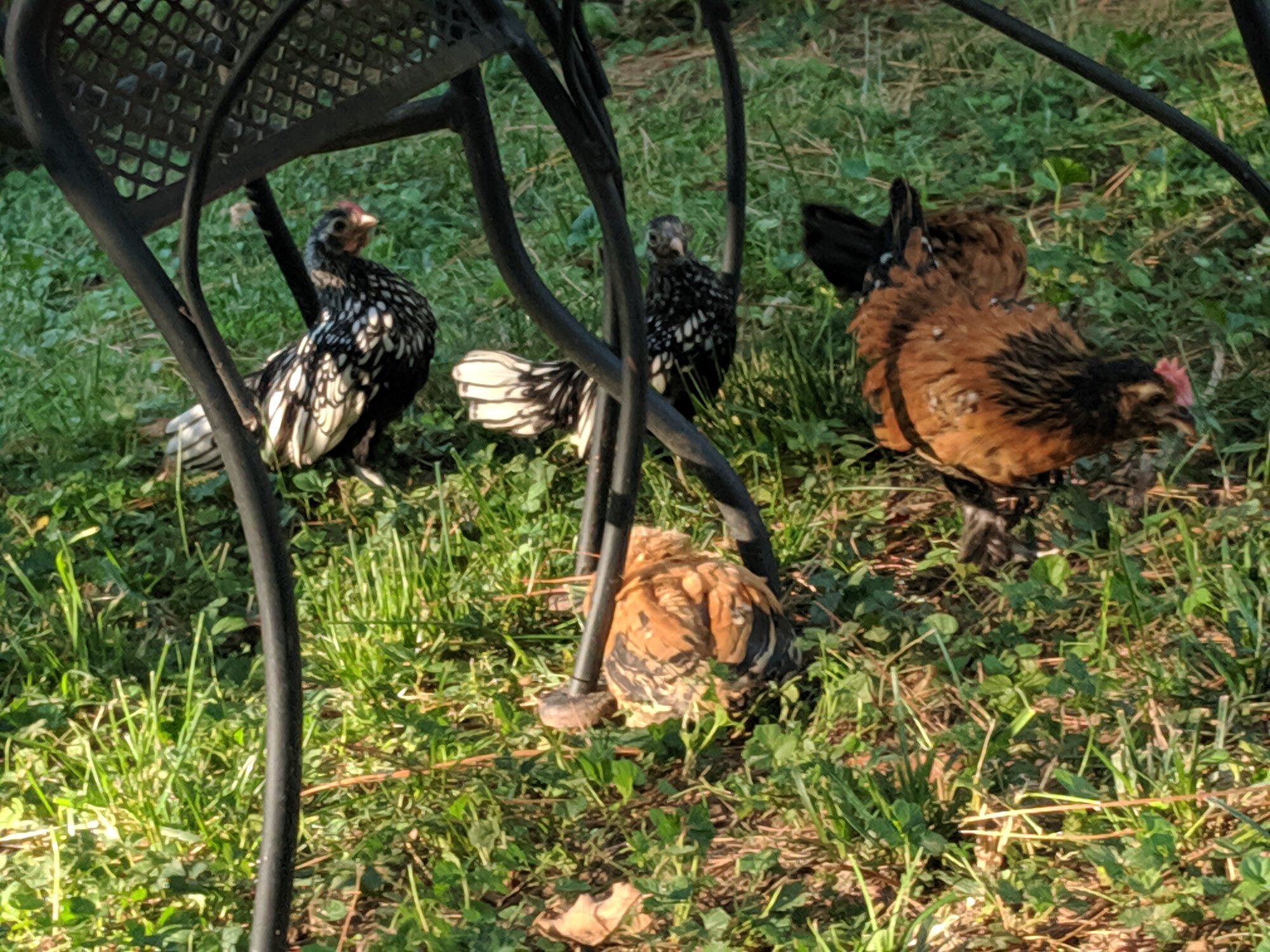 poor baby. it might be best to cull her if she's in pain. if she's still motivated and you're willing to care for her, you can. You'll have to take the feeding and watering situation into your own hands. (literally) you'll have to hand feed her and help her get water. there's not much you can do at this point. I'm sorry.

I know that most people would say that, in this regard, I am crazy, or stupid, or cruel... Maybe I am. But of all the options, when I had a similar situation, this was the only choice possible for me.

I had a friend, who is a schoolteacher, bring me a splash Orpington chick, that was about 10 days old. She had gotten several of them for her class, and once they had gotten to the classroom, this one had slipped a tendon. Unfortunately, it had been three days since it happened, and the tendon was far too tight to put back into place. she told me that, if there was nothing I could do for the baby, I should just end its suffering. I knew when she handed it to me, that I would not be able to do any such thing.

I tried everything I could think of to get the tendon back in place; but I was obviously causing far too much pain to continue along those lines. I was not able to afford to take the chick to a veterinarian, even if I had had any reason to hope that they would be successful either. Surgery, I was told, was the only possible answer.

That was four years ago. That baby is now my very favorite chicken, bar none. I give her water, with a syringe, several times a day. I feed her, by hand, twice a day. she lives inside, in the living room, so that at least she will have the entertainment of watching the household goings-on. She cannot get around, except by flopping, which is very imprecise.

Despite all of this, I adore her very much. She loves to cuddle, and enjoys nothing so much as to have me lie down, so that she can put her neck across mine. Sometimes we even sleep like that. I get so much love and comfort from her! I know that her life must be far more boring than it would otherwise be, but I know that she does not wish to die! She makes that clear everyday. I feel that this life, where she is loved, safe, and cared for, is better than nothing. Others might well disagree. I have a friend who gets angry each time she visits me, because I have not yet had this chicken put down.

As an aside, she has never laid an egg, though she does seem very interested in the roosters, when I take her outside. Naturally, I don't let them close to her.

Anyway, there is one story to consider, as you make your choice. Cheers!
B

Thank you for your kind and honest reply and chicken wisdom.

I am going to watch her carefully and see how it goes but I won't let her suffer in pain.
B

Thank you for sharing with me

it means a lot. I'm glad your chicken is living it's best life

Sorry about your little pullet. It looks like she has a twisted leg deformity in her left leg. Leg bone deformities, such as varus valgus deformity, or twisted leg can get worse as they grow. I would probably let her try to get around by herself as well as she can. Later, you can try a chicken sling or try to make her a little wheelchair if she cannot get to food and water. Many will tell you to cull her, but it is up to you what you decide to do. I would give her a chance at survival, and only you will know if you have the time and ability to care for a handicapped chick. Whatever you decide, we will support you. Her toes are permanently curled. You can try some vitamin B complex for awhile 1/4 tablet daily mixed in her feed, to see if it helps her toes or legs. Here are some links about chicken slings and wheelchairs:
https://www.backyardchickens.com/threads/versions-of-chick-chairs-please.1166308/ 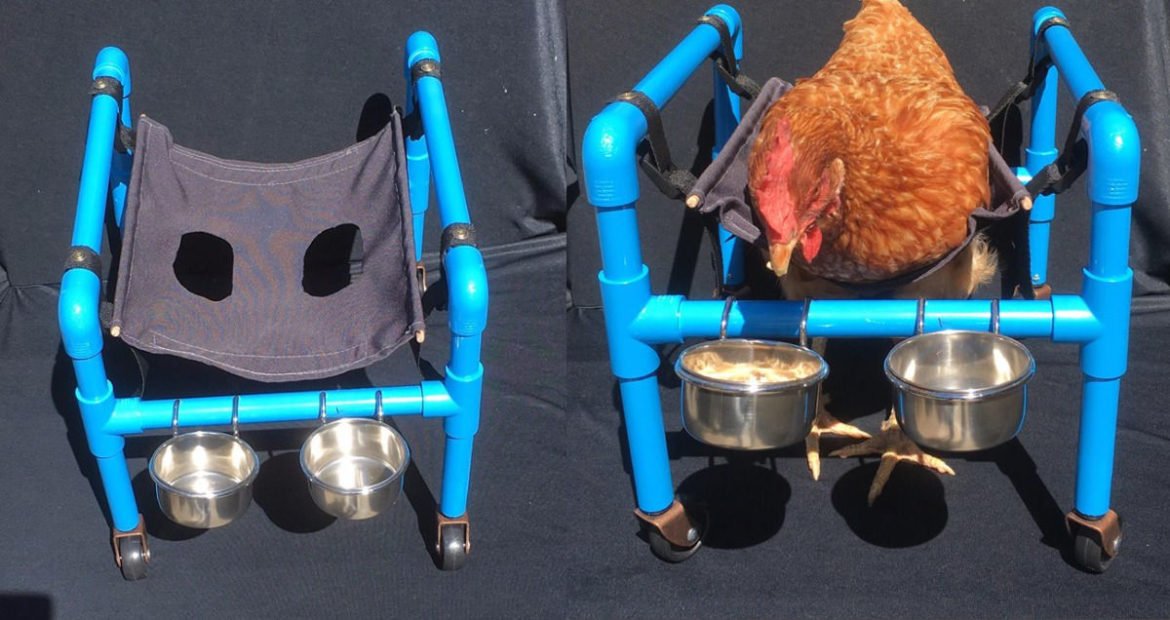 I sure would be interested to hear the experiences of others with slings and wheel chairs. My crippled hen, mentioned above, will use her "good" (I use the quotation marks, because, through years of lack of use, the originally unaffected leg is no longer straight and normal. She cannot use it other than to help propel herself, as here) leg to fling herself out of every sling, chicken chair, etc. that I have tried, if she can touch the ground. If she cannot touch, two problems occur. Her legs get so cold, even in a very warm area, that it is hard to believe they aren't damaged by it. Also, she will (she is capable of dramatic affect, so perhaps it is that...) was herself up in the sling, until she can hardly breathe. I always cave in, and remove her.

Has anyone had this sort of trouble? What have you had any success using? Despite being crippled, this hen is my healthiest chicken, in terms of the normal maladies of poultry. I have little doubt that she has years left to her. She cannot spend them all lying on her side when not being held!

I have only used a sling once on a hen who had good leg strength, but could not balance. She would fall backward or launch herself forward, and fall sideways. She would not stay in the sling I made her at all. So I removed it, and she spent 5 weeks in a recycling basket, where I fed her and she could stand and then sit back down. Eventually, my hen got up and started walking again, although wobbly, and gets herself around the whole yard all day long now.

The problem with slings, is that some will try to kill themselves to get out of them. They seem to work better on chickens who are totally lame. Some people use glasses or cups to get baby chicks to learn to stand and to strengthen legs. I wonder if you could use a weighted and padded bucket to get your chicken standing?

Have a duck who suffered a tendon accident (not sure exactly how it happened, I did not witness it) that left him with a useless leg. We did all we could to fix it, but nothing worked, and we're just glad he's alive. He's a heavy breed, so it's not ideal to have a leg that just flops around like a rag doll. He's learned how to live with it though, and can scoot around as long as he takes breaks. He also has a really cute companion who will always make sure he goes inside before she does at night, and hurry him along if there's danger. (Otherwise known as me. She's gotten overprotective. ) his leg is swollen because of all the stress put on it, so I want to make a wheelchair. The only problem is getting him to like it. Tips? He's quite fearful of any mysterious object. I could never bring myself to cull him, and since he's not in pain, I want him to have a good life. Again, any tips? Thanks!
B

I had to put her down today because she was not having a good quality of life and seemed to be in pain too...