I am starting a new thread in hopes we get everyone together on one thread for turkeys instead of several "turkey talk" threads.


I currently have a dozen, I think, eggs in the incubator they should hatch May 1. I hope.

I have one turkey Ethel and her mate JJ free ranging. She has a nest, but who knows where. ( these two are red slates)

I have been thinking of buying a tracking device to hang on her neck to find her eggs. Amazon has some for 12 bucks.

I have 4 blues in a pen and am collecting eggs from the 3 hens, I am getting 1-3 a day, I have yet to figure out their timing, but they are young'uns.

The Tom and 2 hens are self blue the other hen is a splash, which means I should be free of blacks this year.

I am a little worried about the free ranging turkeys, They are roosting on the fence for the blues, I have game bird netting covering the blues, I worry the reds will fall off the fence or step on the netting and get caught,,dumb birds...


The rooster actually started this after fighting with my other rooster who refused to put up with his nonsense. I should mention no birds were hurt in the filming of this. At the end when you hear me say that's enough, I broke them up and shut the gate. They are both too dumb to know they could have flown over the gate to fight again.. 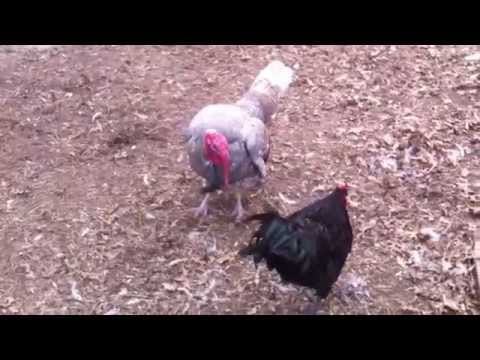 BTW my drink of choice tonight is water on the rocks....

I am so happy to be a part of this thread!

I currently have 5 eggs, sent from DuluthRalphie, in the incubator. 2 are from JJ and Ethel, 3 from whomever else in the flock.

I had a broody silkie that I thought would hatch for me. She didn't like the eggs and rejected the nest after around 12 hours. The eggs we had her on (decoys) were similar in size, but much darker brown. She didn't take kindly to the lighter eggs.
So in the incubator they went!

Fingers crossed. I REALLY want turkeys. And I really want them to be from JJ and Ethel. Hopefully Ralph will share some stories of them... they are very cool turkeys.

Drink of choice this morning, coffee.

I am on my 6-7th cup of coffee, but it is later here than where you are...I would be drinking more coffee, but my Dr asked me to cut down on it..


I think maybe the bad luck on the last hatch was the dry method that worked so well last year for me. The hatch became spread out over several days and some chicks just got stuck in the eggs from drying out.

I took a small pill bottle, (at my age I get lots of pill bottles) and drilled a hole in the end of it, filled it with water and put it in the incubator. I am hoping the small hole will just increase the humidity a tad without going to 80%.


I just know telling people I candled my eggs and checked on them, makes me sound cool and knowledgeable on this website. I learned that from my kids when they were teens..

Oh, I forgot to mention it is snowing here again...sigh

I am going to buy either on line or in a pet store a blue tooth tracker to put on Ethel so I can find her nest. Of course this snow may change my pans and I may just go back to bed and practice being depressed.

I got 2 eggs from the blues yesterday. I am hoping they are fertile. I wish I knew how to tell before putting them in the incubator.

Also I am going to try and make some broodys.... and see if I have better luck than you did with Clyde taking the eggs..


You don't think the name Clyde might have interfered with her wanting to be a mother do you?

I got turkeys last spring. I like them considerably more than my chickens.

Going into spring have 17 hens and 7 toms.

Have got 50 eggs in incubators now. Hopefully

. One of my hens is going broody today.

Bev. For the day is fermented hops. Usually mtn. Dew. All other days

50 turkey eggs in incubation! How sweet that is!

I like my turkeys way better than my chickens too, they are just big pets, which is why I never did process any, that and I am kind of a softy. BUT this year I will.

I am thinking of trying to force a couple hen chickens to go broody. I had such bad luck on turkey eggs in the incubator last year, I am afraid of this years results. I only have 9 or 10 I forget the number in there now.

I am letting Ethel have a nest in the wild, I free range everything, except I have the blues locked up right now to collect eggs. I had Ethel and JJ in the pen too, but my DW forced me to let Ethel and JJ out to have their own nest and not take anymore of her eggs, unless I can find her nest. She said, and I quote " They look so sad in there, let them out NOW!"

Beings this is a new thread, I figure we need some pictures.


This first picture is JJ. I bought him thinking he was a slate blue, that's what the people I bought him from said. He had hardly any feathers when I got him and he was living in the city under a persons deck in about 18 inches of rotting manure. The turkey in the below picture is Ethel, I got her with JJ last spring. She also was not in good condition. I got a second hen with them, Myrtle, she only lived about 3 weeks once I got them. I felt so sorry for them when I got them. They have become great pets. They are like dogs, they follow me everywhere. They let me pick them up and pet them. Ethel talks to us until we pick her up, She will go to sleep in my arms or on my lap when I pet and groom her.

The chickens with her are "turkens" These are chickens I bought last year to keep her happy when she wanted to go broody. she thinks they are hers and they still think of her as Mom. Last fall Ethel hatched 5 poults on her own in the woods. She was gone for most of a month, I would see her every day or two in the yard, but could not find her nest. When the babies hatched and she brought them to the yard, the Delaware turken, saw Ethel and ran to greet her Mom. Mom had new babies and ran the poor turken off.

It was heartbreaking to see the poor chicken sulk away. My DW and I both saw it and thought it was one of the saddest things ever. Poor turken!


They are back together now though, (The 5 poults became Eagle snacks) The next picture is of my Blues. I have another hen but she is in a nest box at the time of the picture. The nest boxes are those round cut off cardboard barrels. They seem to like them. As you can see the Jake/tom is a self blue, two of the hens are self blues and the other is a splash, not a great splash but a splash. Hen turkey on of my chocolates. That is the variety I am hoping to get more of.

feedman77 said:
I got turkeys last spring. I like them considerably more than my chickens.

Going into spring have 17 hens and 7 toms.

Have got 50 eggs in incubators now. Hopefully

. One of my hens is going broody today.

Bev. For the day is fermented hops. Usually mtn. Dew. All other days
Click to expand...

Yep, Do you have a chicken or turkey going broody..

I just candled a my eggs. I could not see a sign of life in any one of my turkey eggs....

I am hoping it is just too early to see anything....

Major depression could set in over this!

I marked the air sacs so I can see in a week if anything is happening...

My creamette eggs are al hatching as of today.

threatened by a turkey?