A day at the (funny) farm.. A 3rd Broody joins- babies start hatching

A quick history: We have a stray kitty that showed up in the chicken run as a tiny kitten, who is still there now, living with the big girls.Three or 4 of the big girlsescape their run every morning and roam the neighbors yards all day. And I have a trio of year old girls that have the run of the yard, and like to come up to the porch and beg. One decided to start a molt in the middle of January,but is finally feathered again and just started laying again- in the back of the grill. And then there is Barney, my frizzled silkie/cochin mix who decided to challenge my RIR mix rooster Hardy to a fight through the fence. Twice..

The fence between the banties and the big girls was fixed so that Barney and Hardy could not reach each other. This morning( after his last early morning wake up crowing) Barney was finally moved out of the crate in the laundry room back in with his girls.
He didn't know which girl to romance first. He ran around all of them, and they all ran away. ( The girls really don't care to be romanced).
Barney ran after them, and tried to jump on their backs. But the girls had their timing perfected- they stopped running just as Barney jumped- and he slid across their backs, and ended up leapfrogging over them. He landed in front of them, and turned around confused. Poor little Barney boy!! Those sikies are smart. He slid across 2 of their backs. The other girls run faster than him LOL. They don't scream, they just run. They sidestep and change directions on a dime.The poor little guy got all worn out within minutes. Luckily, one of the silkies gave in, and allowed Barney his 2.8 seconds of glory.

I was watching the boys from the deck through binoculars ( I have horrible vision, and it's the best way to keep an eye on them. If I walk toward the coops, they all stop what they are doing and run to the fence).
I saw the kitty rub against Hardy, then lay down and roll over -almost like asking for a belly rub. Hardy walked away, and the kitty followed. Rubbed against him again. It was very cute.

Meanwhile, there was scratching noises in the back of the grill. Beebee was trying to get comfortable, but Laurel was not having any of that. 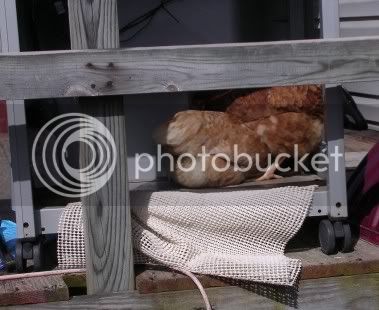 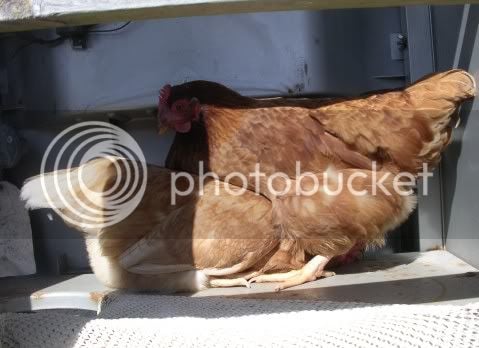 Poor Beebee just wanted to lay an egg in peace. Laurel was determined to not let that happen. Laurel almost got egg on her face: 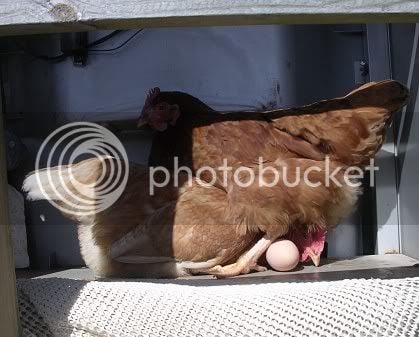 Not too long after, I took some kale out for the trio and the escapees. The female kitty in the house is in heat (AGAIN) and is trying to escape out the door, while the trio is on the porch trying to come in the door. The girls pecked at the kale leaves, leaving the stem.
Later,I brought doofydog out. Doofydog ate the kale stem. Yes, she is a weirdo.
I had a piece of kale in my hand. I was holding it out for the trio to peck at, and doofydog was going nuts trying to eat it. I had 4 chickens and one doofydog battling for a piece of kale.

The other escapee chickens saw the excitement and decided to run toward the food. The kitty, who never comes across the yard, was following them. I ran inside, and cut up some leftover steak and grabbed the camera.
I tossed the steak, and I had 6 chickens and 1 kitty running around trying to get a piece. Doofydog was at the end of her chain barking at the kitty- she only met the kitty once during the heavy snow. 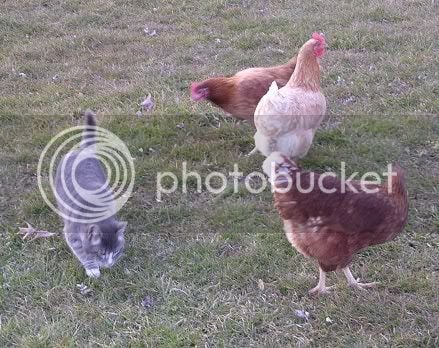 Laurel, who is one of the year-olds is in a seperate coop from the big girls. Laurel is not used to having kitty share her space and eat her food. Laurel gave kitty a peck on the head, and then jumped up and kicked him . 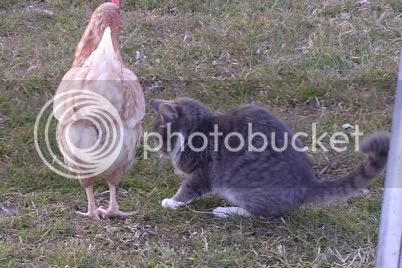 Poor kitty isn't used to chickens who don't like him. He ran a few feet away, and thought he was safe. 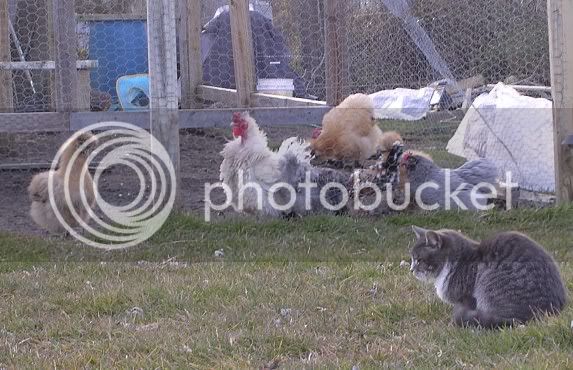 He wasn't safe though. Beebee started running at him. 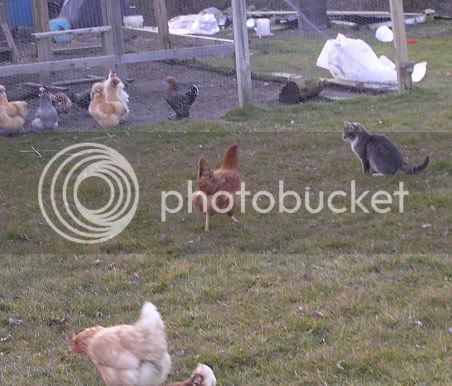 Kitty ran around the back of the coops, and within seconds, he was safely in the chicken run, sitting between Hardy and the big girls. Doofydog stopped barking, and was taken inside. Inside-cat-in-heat was scooped up as doofydog went in and she tried to come out. The trio stood at the back door begging. Barney stopped chasing his girls around. And the escapees went to find goodies in the neighbors yard.
Last edited: Apr 26, 2010

The middle of Middle Tennessee

Nice LilBizzy. Kitty is very pretty. I love your stories. That is funny about Barney. Poor fella.

Cute story! I just love these stories everyone is putting up!!

Maybe you guys should write a book!!

thanks so much for sharing.

Sounds like you are surrounded by insanity!! But---what fun!

Love the story!~and the pictures were terrific. We need to keep this going!!! It's hilarious!!!

Love the stories and pics! Thanks!

what a wonderful day! love the pics to go with the stories!

Bizzy has started a story thread! I am SO there!

eta - I realize you started this last week. Life hasn't allowed me much playtime. Sorry it took me so long.

Thanks for the update on the chickens and the kitty. I oftened wondered what happened to him.

I regards to the dog who eats kale - I've got a herbivore dog as well. Tonight she went into the chicken's run to get some of the cabbage leaves I had thrown to them. She usually gets fresh vegetables and yoghurt in the morning after breakfast and sometimes a salad with dinner. She'll eat almost any vegetable except okra. Doesn't like okra.

The day actually started the night before. When going to put the chickens to bed, in the babies pen, Lil Bit was sitting in the corner- on the eggs. She had first gone broody only 10 days after she started laying eggs. It took her better than a month of sitting on pine chips to realize nothing was going to hatch. One week after she stopped being broody, her sisters Franklin and Smoothie, and one of the silkie triplets decided they were going to be broody also.
I tried to get the eggs from her, but she screamed and attacked my hand with superhuman.. I mean superchicken strength.

I wasn't sure if Smothie had just layed the egg out in front, or if she was thinking about sitting also. I laughed at the picture, and then husband and I went to the flea market.
On the way, we stopped at a convienance store so he could use the ATM. I decided I wanted coffee, so I locked the truck, and went inside. When we came out, I said " I was very thoughtful- I locked the truck" Hubby stopped dead in his tracks. Asked if I locked both doors. I then realized the mistake- the keys were in the truck. Uh oh...
So, one sacrificed coat hanger, several naughty words, a few apologies in bewteen giggles, and about 20 minutes later, we were on our way.

When we returned home, I checked the babies pen. Smoothie and Lil Bit were both sitting with their butts against the wall, side by side. The egg that was on the floor earlier was nowhere to be seen. I managed to lift them both for a quick peek, and Smoothie was sitting on 4 eggs, Lil Bit on three.

The kitty was rubbing against Hardy.

Smoothie was no longer sitting on eggs! YAY! I peeked in, and Lil Bit had flattened herself out over 7 eggs.
All the chickens got fresh grass clippings to play in. The babies screamed and ran from the clippings going over the fence. Barney noticed it was good, and made his " Come here gals I found something good" sound. Pretty soon, all the chickens were scratching in the grass.

The rest of the day went without anything interesting happening. Then it was chicken bedtime. First, I went to the teenagers pen. Laurel, Essie and BeeBee were on the roost. Perfect all three present and accounted for. But wait.. what is this?

One of the big girls. Sitting in the teenagers nestbox. On 3 unfertilized eggs. Ohhhh boy...
Kicked her out and sent her back to her coop. Then I went to torment Lil Bit a little bit. I was smart- wore a jacket, and pulled the sleeve over my hand. Otherwise, I'd have new piercings from the little dinosaur: There was a new egg in front of her. I wondered hy it wasn't under her. Poor lighting, but it was more than a kodak moment. This attacking viscious little squirt of a chicken needed to be videoed