This afternoon I began painting the interior of the coop and the big girls were out wandering around the garden area. My little taco bell beast was lying down outside the coop watching the girls.

Bear in mind that the girls beat up on him all the time, jump on him and he has pulled back a bloody snout more than once from nosing into their tractor. He tries to share his teddy bear with the girls and get them to play and they will have none of it. They look at him like he is a freak of nature that should be destroyed.

So, the scene. Me on a ladder with paint brush in hand, dog watching girls and girls scratching for bugs in the garden area. Here comes Mr. Coon traveling slowly through the wooded area between the girls and me (inside the coop).

Little doggie perks up, growls low and stands to a stalk position. I go to the door of coop and yell the normal... "Shut up stupid dog those chickens will hurt you" when all of the sudden he tears out running.

I jump out of coop go chasing what I assume is the stupid dog heading for a face pecking and I see this huge raccoon going up the hill towards the girls and doggie after him.

Doggie chases him around the house and off into the woods.

I grabbed the girls and got them back in the tractor immediately. My head honcho, Lilly was growling and thoroughly ticked off. I go after stupid dog and am calling him when here he comes. STRUTTING towards me and chesty and stuff as if to say "Yeah, I got rid of that coon". He goes over the tractor and is sniffing around when he gets hammered by 5 of the 6 girls.

He got this look on his face that read "See if I save your butts next time" and he trotted back to his spot by the coop and laid down. I went in the house, got the rifle and went back to painting.

About an hour later coon came back and coon was dispatched with the rifle. I will take no chances with my babies.

After this exciting afternoon, I would like to show you what the great chicken guard is doing as of five minutes ago.... 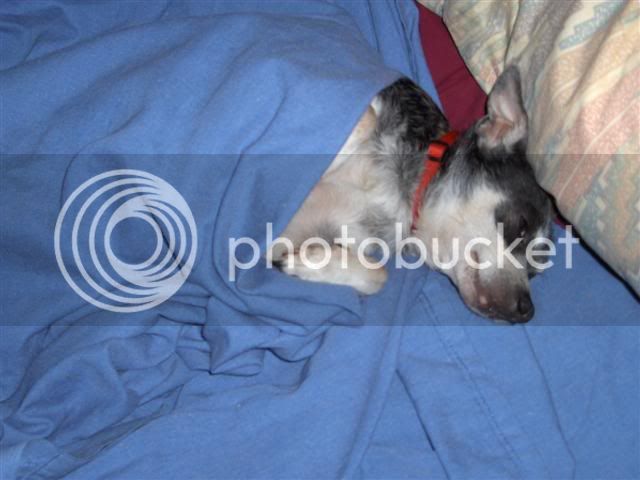 It is hard work protecting the girls, chasing big coons and getting pecked about the head and neck for a "thank you". Poor little guy. He did good though.

That boy deserves a steak tonight! Good dog. Obviously your hens have no respect for a 'real' man!

At very least he is a great warning system!!

Yeah right huh Chirpy....no respect whatsoever! And he loves them. My wolf had to be put down a bit over a year ago and they were buddies. So when the chicks came along he wanted playmates.

My spoiled brats will have notta to do with doggie. But he still watches out for them though. I never worry about him attacking the girls because

A: he does not have real teeth like a real dog, my girls bites are worse,

B: The girls outnumber and out weigh him, and

C: Doggie likes where he lives

..i was laughing so hard reading the story..i can just picture it!...

.........do coons usually come out during the day time?..just curious..cause i've never seen one around here during the day...Thanks, Wendy

Not often..this was late afternoon. I think he was moving towards the creek for water but in any case, he is no more.

Little taco bell beast so loves the girls and they constantly dismiss him...most often the dismissal is painful.

Great story! And he looks so cute resting. What a sweetie!

Those chickens are ingrates that need to change. They should each lay an egg for their lifesaver that you could scramble up for such a good, brave, but unappreciated dog.

What ate him? (Warning gross pics)