A rooster that actually roosts and protects?

Our rooster does not deserve the name. He only roosts one hen, an old one that doesn't lay anymore. The two of them are always the first in bed, like some old married couple settling in to bed to watch the dishonest evening news every night.

The other 10 hens wander in, hopefully, later. Or we have to go look for them to close up the coop. The funny thing about our rooster is that he's only a few years old, but acts like a grandpa.

So I want to buy a few more layers and a young rooster. Any advice on how to proceed, so the new rooster actually roosts the hens? How old is the best age to buy a young rooster? Should we start him off in his own coop with the new birds, then migrate them to the big coop? Or just move them all in under cover of dark right away? How to best mitigate the rooster fighting issue?

Thanks for any advice! 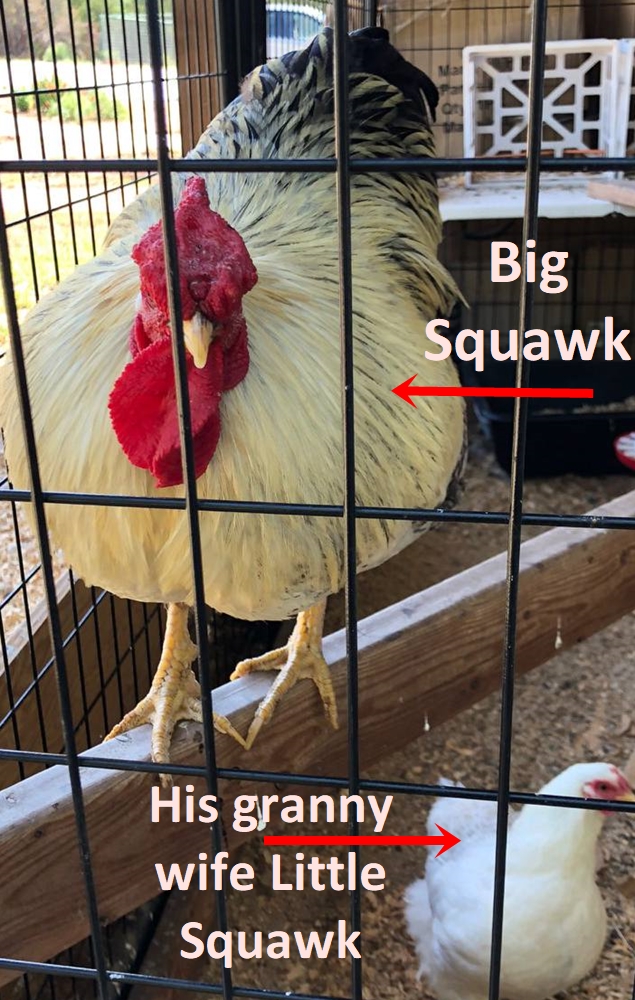 What does this mean?
Do you mean mounts for mating?
Or gathers the bird into the coop to roost(sleep) in the evening?
How old, in weeks or months, are the birds that come in late or not at all?

Not sure what your goals and expectations are for this cockbird.
My cockbird doesn't not gather everyone into the coop at night,
he is usually roosting earlier with the other birds of his age(2-3yo),
the younger birds(~8mo) come in on their own. Not a problem.

ETA:I'm not sure why cock/erels are called roosters. Wiki says it originated in north america, probably because people don't want to say the word 'cock' because it has other connotations. SMH.

Yes, I'm also guessing you mean "mating" not "roosting", the latter being a term referring to where chickens sleep on a perch.

I believe part of the problem is time of year. Chickens are molting and mostly have stopped being fertile during this time. Combs shrink and turn a dry, pale color indicating this. Roosters also are less apt to try to mate during this time when hormones are at a low level. They see the pale combs and know it's not productive to mate the hens.

You really need to wait and see how this rooster performs after the lengthening days begin to trigger hormones again.

aart said:
gathers the bird into the coop to roost(sleep) in the evening
Click to expand...

That's it. Our chicken lady tells us that this is why they got named roosters. This guy has his way with the ladies, no problem. But he only roosts one hen.

More troubling, he does not accompany the ladies around the yard much. Only a few follow him.

We don't know his exact age, probably 3 yrs or so. Our chicken lady says we should have a second rooster.

Any advice on which types are most protective?
Last edited: Nov 26, 2018

He's in love, leave him be.

"dishonest evening news" ... that alone got me to hit the like button

RenoHuskerDu said:
That's it. Our chicken lady tells us that this is why they got named roosters. This guy has his way with the ladies, no problem. But he only roosts one hen.
Click to expand...

I suppose that kinda makes sense...but have never herd(haha) it before.

RenoHuskerDu said:
Any advice on which types are most protective?
Click to expand...

It's a crap shoot, and would boil down to an individual bird rather than a particular breed.
Some will be very attentive to the whole flock from watching for predators to breaking up hen fights to herding them to 'bed' at night.... and some won't.
I would never count on a cock/erel to protect the flock.

Still curious about this....

aart said:
How old, in weeks or months, are the birds that come in late or not at all?
Click to expand...

Seems normal to me, mine roosted with the grannies his whole first year he just started roosting with the hens his own age and younger. I think the fellas just like the cougars when they're younger. It is probably good, the old hens are normally the smart hens.

Shadrach said:
He's in love, leave him be.

What to do - Biting, bullying and aggressiveness

1
Old Hen Not Returning To Coop