A sad fairwell to Peter and Sammy (new pics page 3!)

I have some sad, but happy in the end news... (some of you have already heard this)

Peter and Sammy, my baby pekin and snowy mallard, have left our house to go live with Allaboutdemchicks, aka Claudia. They are now 8 weeks old. When they were 4 weeks old, i was getting concerned about their behavior. As many of your know, my two runners Victor and Mingmei are perfectly adapted to living inside with us. But peter and sammy had been having some trouble...

Peter and sammy have never really enjoyed being picked up and were always scared. Victor used to be this way and still sometimes has little fits of running when we pick him up. So we were working on picking them up slowly and not scaring them. It seemed to be working and they were losing their fear of our hands reaching in their cages. But then i had to have surgery. My surgery had to be done over two hours away in a different city, and all the ducks would have to spend two nights alone. Peter and sammy were still in their small brooders, and we were concerned about their food/water situation while we were gone. So i rigged my indoor pen for my big ducks to have two seperate "rooms". I put the big ducks on one side, and put the baby ducks on the other. We left
them ample food and water and headed off to Birmingham the night before surgery. After my surgery, in the evening while the nurses were tending to me, David drove the two hours back home in pouring rain, to refill food/water and to give the ducks their bath. He then drove the 2 hours back to the hospital to stay
with me for the night. After about 30 hours in the hospital, i got to go home to rest. I was unable to hold/pick up/pet/ and barely even see any of my ducks. Poor david was so busy taking care of me and his Law school homework (on top of doing all the chores, including duck ones) he was unable to give them a lot of
attention. After this, the baby ducks were not the same. The became scared again, ran away, didn't want to come out of their pen. We tried our tricks again, but to no avail.

Peter and sammy always seemed a bit different from our ducks. I worried from a young age that they might not have imprinted on humans. Peter would get so upset at being picked up, he'd scratch and hurt his beak when we did. Sammy cried like crazy. Peter, who has been getting stronger and fatter, was getting harder and harder to hold/pick up/ catch.... After a long talk, david and i
thought maybe they'd be happier outside with other ducks. (they did not take a liking to Victor, he and peter fought all the time). So i brought the babies outside and they loved it. They completely ignored me and ran around having fun. They were mad when i made them come back inside. I unfortunetely can not keep ducks in my back yard because i live in a townhouse assoiciation and they
won't allow it.

So i called claudia who took in the 5 extra ducks we got from peter and sammy's order. She happily offered to take them in with her ducks and chickens a hour north of us. So, on tuesday, they officially moved to Claudia's farm with their fellow hatch/shipping mates. While sammy's behavior wasn't as strong as peter's, those two ducks are the bestest of friends who we could never seperate.
They immediately took to their new home and made friends with the other ducks. They were super happy to be outside and loved the pen they were in. They did not follow us when we went to leave. We visited them today and they still were happy, and were bonding with the other ducks more. I brought them their favorite treat calf manna, and their favorite toys for their new pens. they
happily shared their toys with their new friends. Claudia was my
first choice to take them in and she is taking really good care of them.

While this was the best decision for peter and sammy, we miss them dearly and worry about them all the time. We knew that if we kept them inside, they would be unhappy, and they would constantly get stressed out from being picked up and handled (and i've read ducks can die from stress). We worried about sammy
running away from us, and peter flapping his strong wings and hurting himself with his nails. Today while we watched them, they seemed like they never were in a house. In fact you'd never guess they were sitting on my bed watching TV the week before. They act exactly like claudia's other ducks. We think it might be a hatchery thing, or maybe since they were all together for too long as babies.

So please keep good thoughts, prayers, and good vibes for peter and sammy in their new home. They are still loved by us, and are loved by their new family. They love their new home. Thankfully, claudia is a friend who happily lets us visit them whenever we like. And whenever we go to birmingham (for my check ups, visits, etc) we can stop by and visit them. We will hopefully be visiting them again in 3 weeks when i go back to my doctor.

There is also one more bit of good news... We still wanted new ducks, and decided to order two new baby runners from the same place we got Victor and Ming Mei. Since we had such good luck with them, we thought we'd try again, this time seperating the babies immediately into their own brooders. They came yesterday morning, and have already taken quite a liking to us. They spend a
lot of time with us, and each has bonded to david and myself. They are not even interested in each other and prefer to stay by each parent when we all sit together. we're hoping the babies and the big ducks will get along better if they are all runners (they hopefully will herd together).


Here are a few last pics we got of peter and sammy in their last night at our home:

The babies spending time in David's office with him- 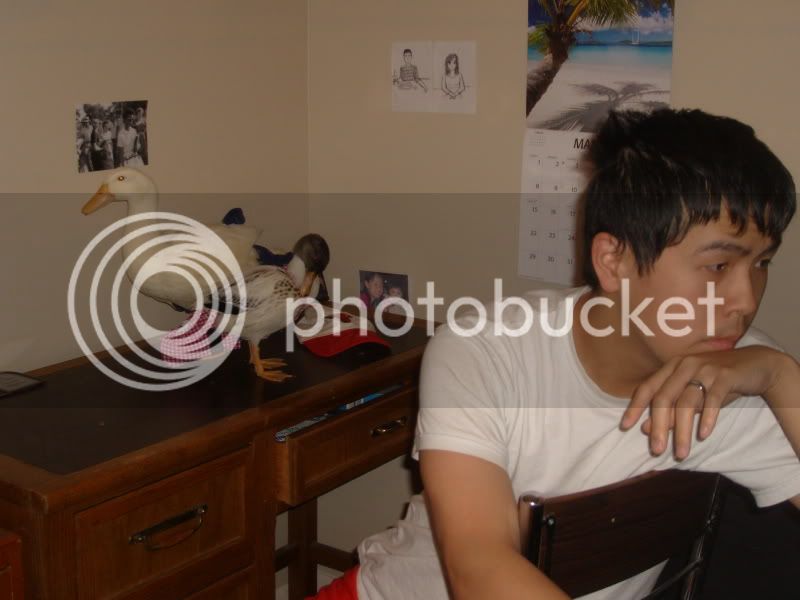 Their last bath in the tub- 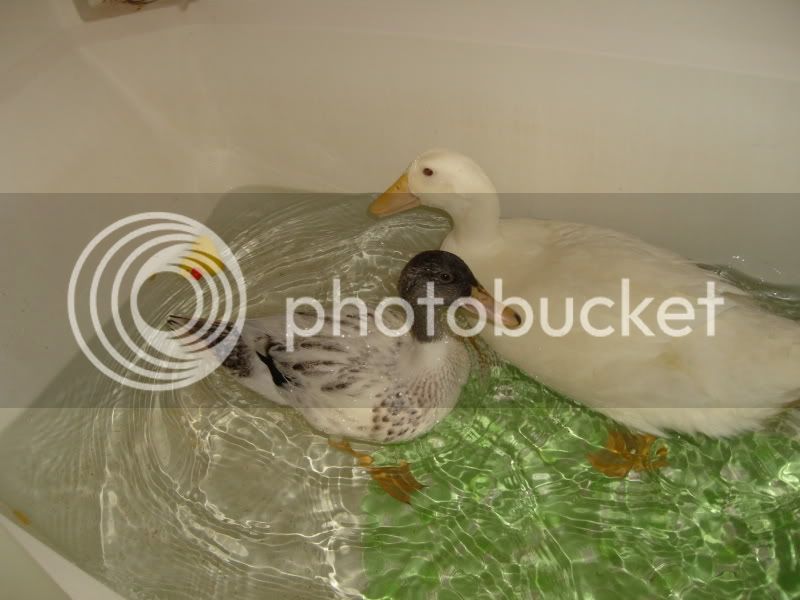 A good one of sammy- 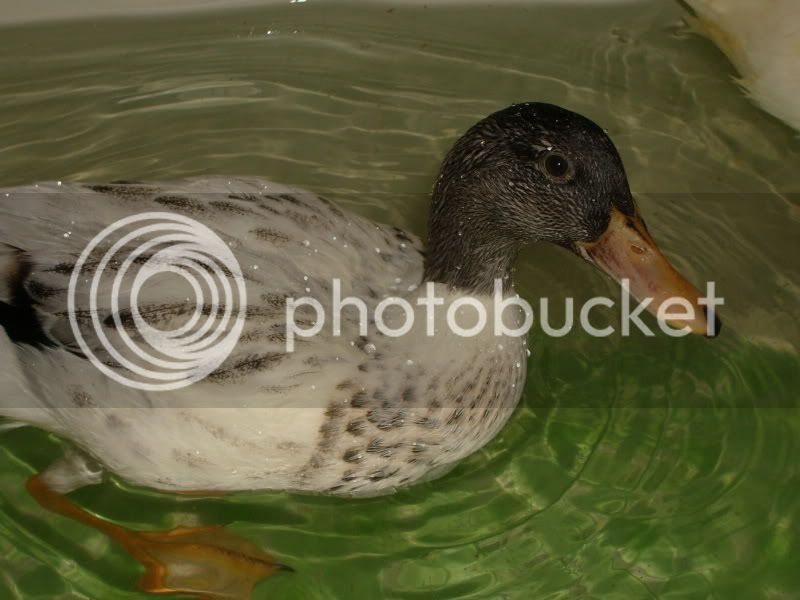 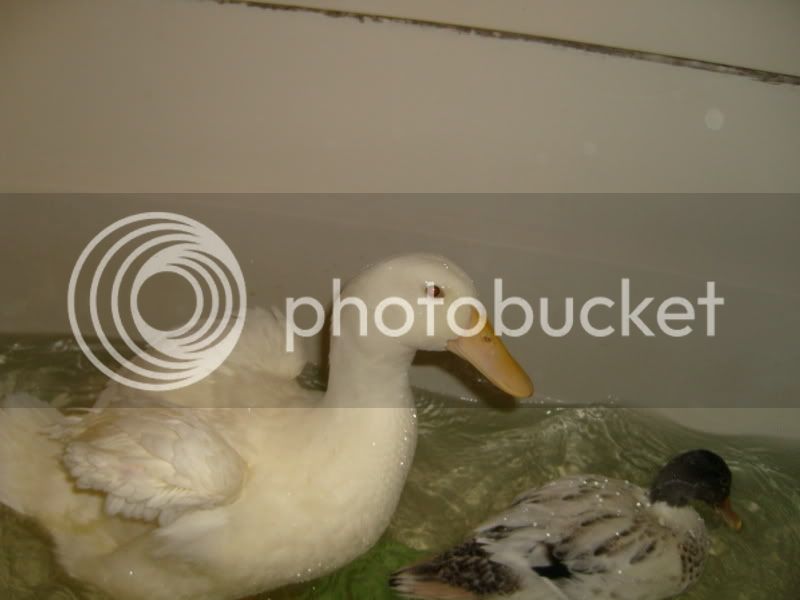 Ming MEi being Nosey during the babies bath- 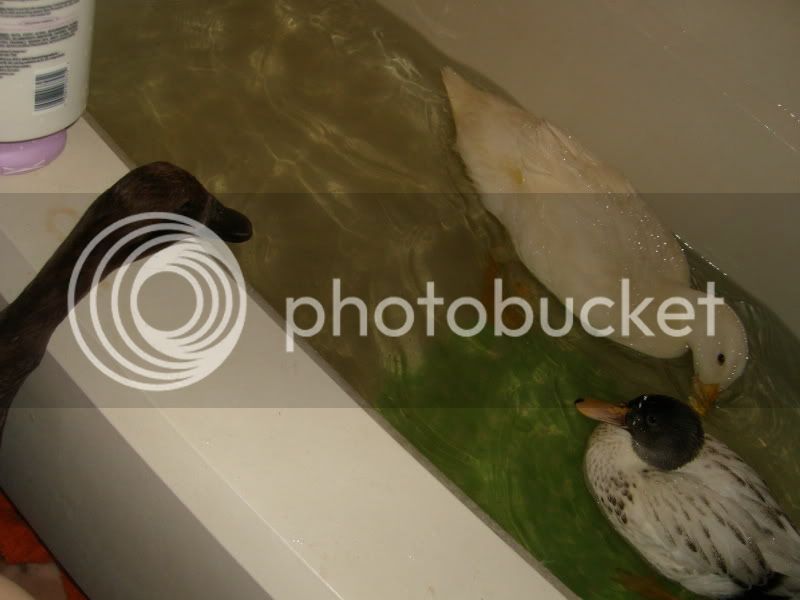 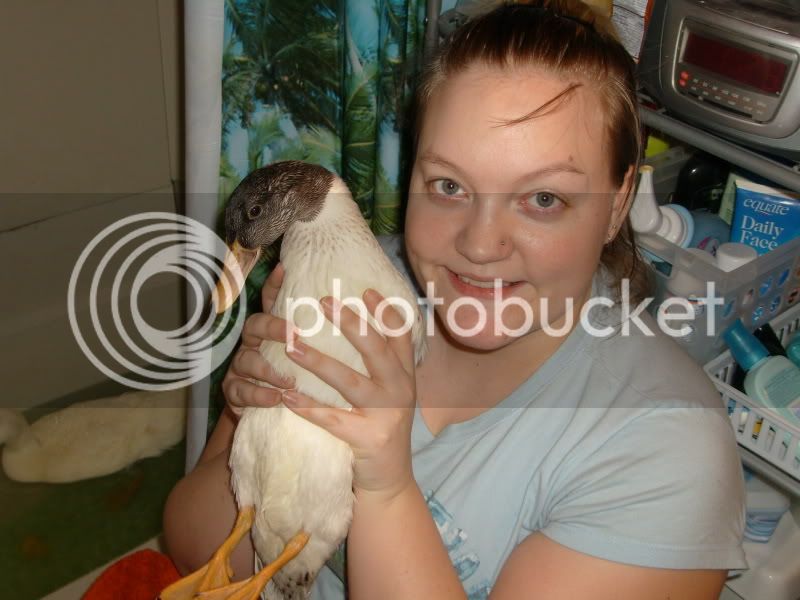 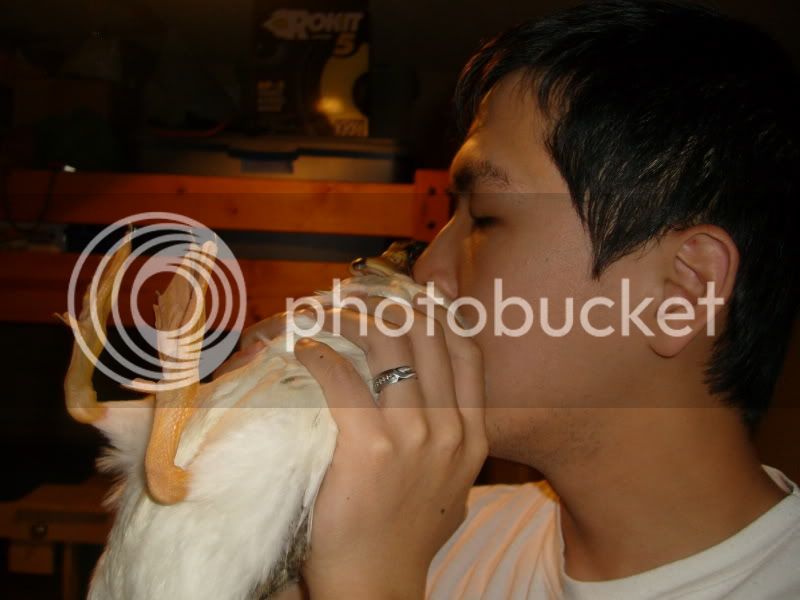 Me and Peter- (there were 4 attemps at this pic, he was not cooperating, lol) 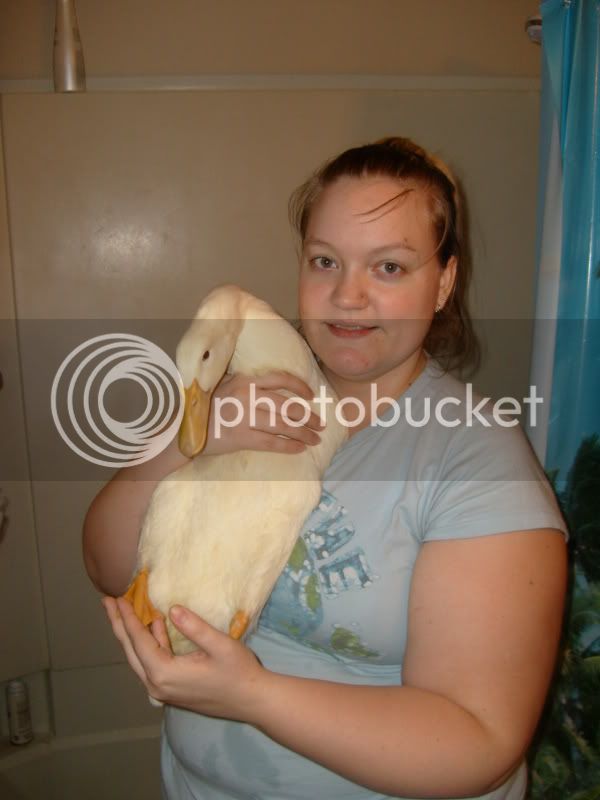 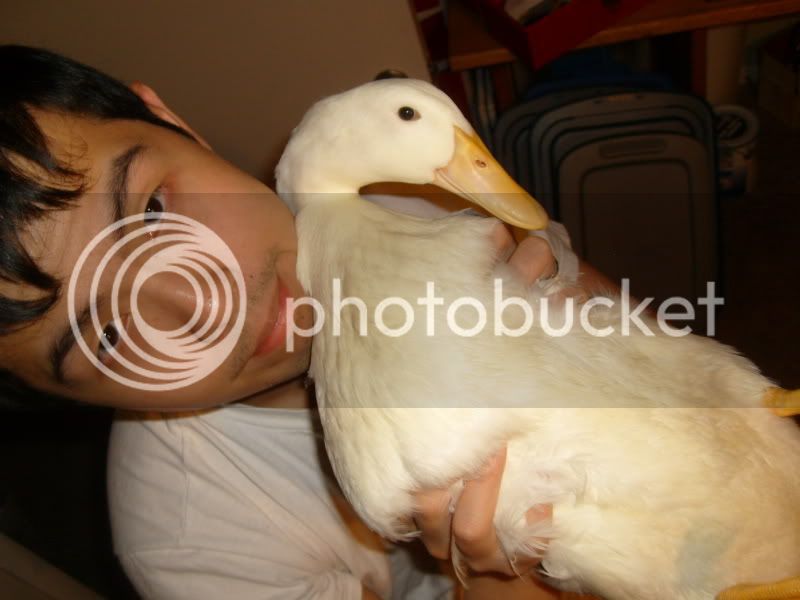 Peter and Sammy both looking at me, last night in their pen- 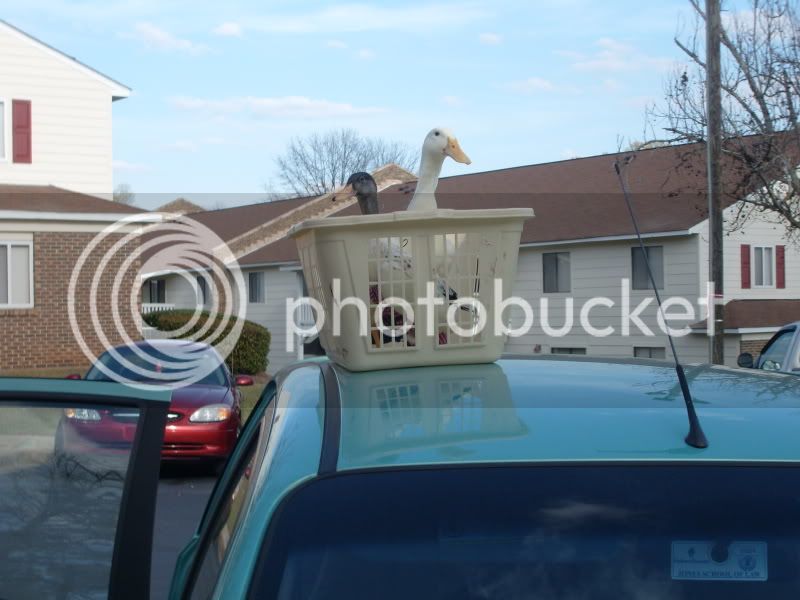 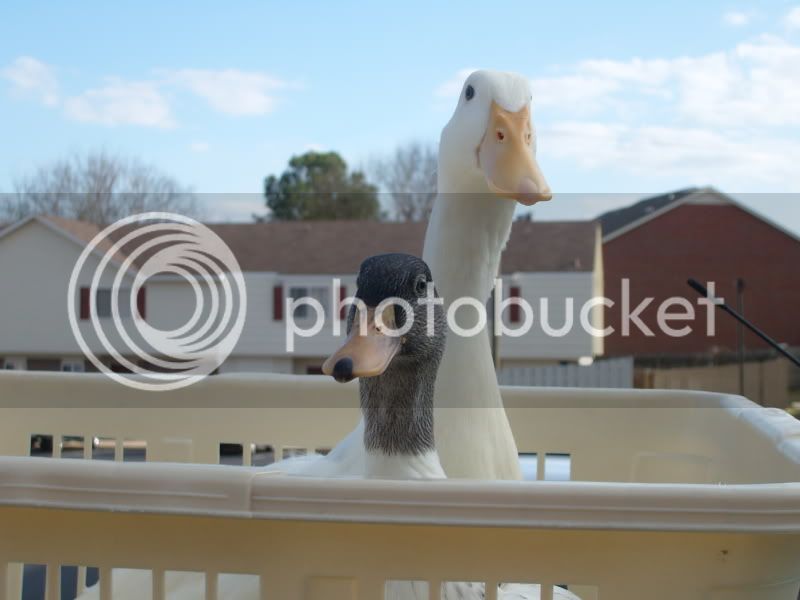 I am so glad that you love your ducks enough to do what is best for them. Some animals are suited to indoor/pet life, and some are much happier outside. The pictures are beautiful, your ducks live in an amazing spa-like setting... i feel a little bit bad for my outdoor, coop ducks, they NEVER get to swim in the bathtub

my husband would go insane if he found ducks in the tub! so, anyway, good job!

Oh...I just got all teary reading that! I remember some time ago your story where David was against getting more ducks but met and fell in love with Peter. You guys are terrific for doing what was best for these little sweeties!!!!

Such a nice story with a happy ending. My favorite pic is of the dark headed duck looking over the tub at them!! That needs a caption!! So glad that you were able to find them a happy home! I guess some animals just don't bond with humans like others do; I have two lionhead rabbits that I have worked with for 2 months and they are still so skittish and nervous, I just decided to talk sweet to them and try not to stress them out anymore.

I know it was rough, but I think you are right. These two were "duck ducks" not "People ducks".

You did the right thing for them and that makes you a great duck mama.

Best of luck with your new runners. You have done so well with the other two, I think your little flock will do great.

that is so sweet of you. the ducks must be very happy in their new home, but i bet you miss them dearly. it was very smart to do what was best for them.

I hope your new duckies work better as house ducks. I know it was hard to give up your others but it must make you feel better knowing that you can keep in touch & that they have a good home.

I heard from claudia today that they got to free range for the first time today and had a ball! It also rained, making it their first time in the rain. They were in heaven!

Nettie
Thanks for updating us all about Sammy and Peter. Easy to see from the photos how it would be hard to part with those little sweeties.
I think you are wise to retrace your steps in trying to find new ducks that will adapt as well as Victor and Ming Mei. Now that you are feeling better, and also have that beautiful indoor duck plaza, you are certain to have success.
I'm looking forward to hearing about your next venture in duckie devotion.
Best wishes to you, David, and your dear feathered ones.