I just made a terrible mistake. I started out with 22 eggs. I candled at 7 days like I read I should do with brown eggs. I couldn't tell anything. I tried again at 10 days and WOW! I removed 9 eggs that were obviously not making the same progress as the other 13. I candled again at 14 days and again the difference was obvious. One more gone. Now the trouble starts.

I'm still trying to figure out how to keep the humidity as high as I've heard recommended. I have a Little Giant still air incubator. I filled the grooves up with water and it doesn't even come close. I made three little pans out of aluminum foil and I was able to get it up to about 50%.

At day 20 I had a pip. I don't have to tell anyone who's hatched one chick how exciting that first one was. I was a little baffled though. A whole day early. BYC forum members let me know that was OK and I went to bed because I couldn't stay awake. I awoke to a new chick whose first action in life was to roll its brothers and sisters all over the place. Again BYC Forum to the rescue. I was assured they'd be fine. At 21 days almost to the hour, a second pip. 15 hours later I got to see one hatch. I even filmed it.


At 21 days 16 hours I noticed two more pipped. Again I had to go to bed. This morning 22 days now I was sure all was lost. I still hear chirping but I figured those that hadn't pipped were lost. I took one of the eggs out that hadn't pipped. It felt cold. I broke it open and found a dead deformed chick. I took another that hadn't pipped. It didn't feel cold. I broke it open on the air pocket end and to my horror I could see the chick moving inside. I put it back in the incubator and I'm hoping it will make it so I don't have to be sick about it for weeks.

The moral of my story: Patience is a virtue. (Not an original thought by the way, just my own application) If your chicks are dead at day 22, they'll still be dead at day 25. Give them a chance. This is my first time hatching and I would really appreciate it if someone will correct me if this is bad advice.

Thanks so much to all of you who post here. My failures I take the blame for. That I've had any success at all I owe to you.
Last edited: Mar 12, 2008

There is hope. Keep us posted on the egg. If it hatches and is a girl, you could name it Patience!

Thanks for sharing that story. How's the chick doing?

You said everything right.....

Sponges would work well in foil cups too....

11:15 am: It's been an hour and Pat (works for boy or girl) is still moving around in there. Currently three others are working their way out. The two already hatched, a Rhode Island Red and a Black Sex Link with the same Red father are doing well.

12:00 noon still moving. I've got a really good camera to take pictures and a really poor ability to use it. Here's the damage. 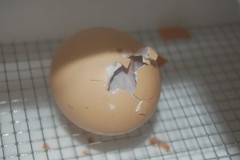 Here's pats full sibling and its parents. Can you tell from the photo if it's male or female? It's black with black legs, a yellow spot on its neck and yellow tipped wings. 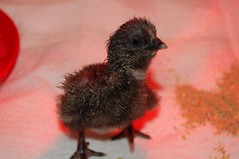 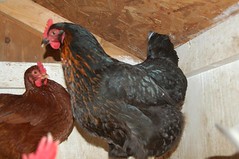 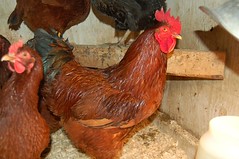 Can anyone tell if my rooster is a Rhode Island Red, Production Red or New Hampshire Red?

12:45 pm: Still very much alive. I'm not sure which one it is but somebody is chirping to beat the band.

If the mom is the sexlink (a BR RIR cross in the pic), and the father is the RIR, I don't think the chick can be feather sexed because cross breeds don't breed true. The parent female needs the barred barred gene to make reliable sexlink chicks, but I guess since the mother should have the barred/non barred gene in it, there is a 50/50 chance to be "sexlinked" in the F2 generation when bred to a RIR male... but with a 50/50 guess... good luck.

Someone should correct me if I am wrong on this genetic thing though.

Good luck with the rest now. Waiting is the hard part!

1:20 pm still moving. I tried with a close up filter. Couldn't get the focus right. 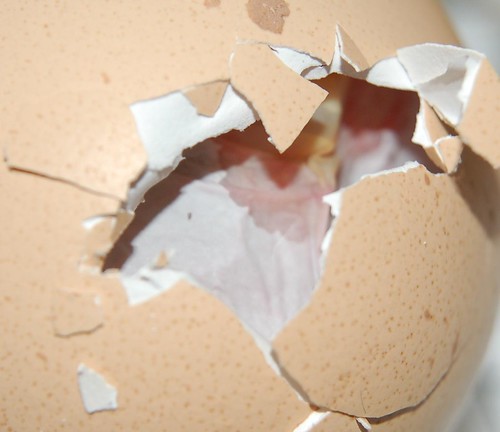 Successful hatch except for one egg: WDYT?

S
What do I do tonight? (Time sensitive)