So we took a little mini trip down to Springfield Missouri. We ended up staying at the Ramada hotel there in town which was just fantastic. It had two pools (indoor and an outdoor) with a large jacuzzi. The indoor pool is surrounded by a indoor greenhouse type deal with large tropical plants and several hotel rooms with backdoor access to this area or in the case of the upper floor looking out on it. It was a lot nicer than some of the high priced hotels we've been too in larger cities to be honest. Anyhow we decided to spend the day before driving home hiking around one of the parks in the area. But it was a rainy day and with my wife being pregnant we decided to cut the day short and go to the Wild Animal Safari just outside of Springfield. I've been to African Lion Safari in Ontario Canada (which is a lot larger), so we more or less knew what to expect. The carnivore exhibits weren't the best though I believe the park is under new management and I'm guessing enriched environments are very expensive to build. So, I won't be too hard on them. All the other animals seemed to be having a nice life especially the ones in the drive through section. That section is basically a large open area with a winding road and herds of different animals cohabitating in relative peace together. Most have learned that people = food. They sell bags of oversized alfalpha pellets to give the animals. That part of the place was a riot if you like getting up a close with animals. Here's some pictures of the residents of the Safari.

Our trip started with what can only described as series of camel muggings. I don't know if you've ever seen a Bactrian camel up close but the ones they have at the park are absolutely monstrous in size and they know it. This one got in front of my car and then waited for me to roll down the window for the obligatory food toll

. A slimy experience. In the middle of it you're wondering how am I ever going to get this thing out of my car! Then you remember that if you piss off a camel they can spit....which would mean even more slobber. We eventually figured out they will leave if you throw a handful of food out the window giving you a small window of time to advance 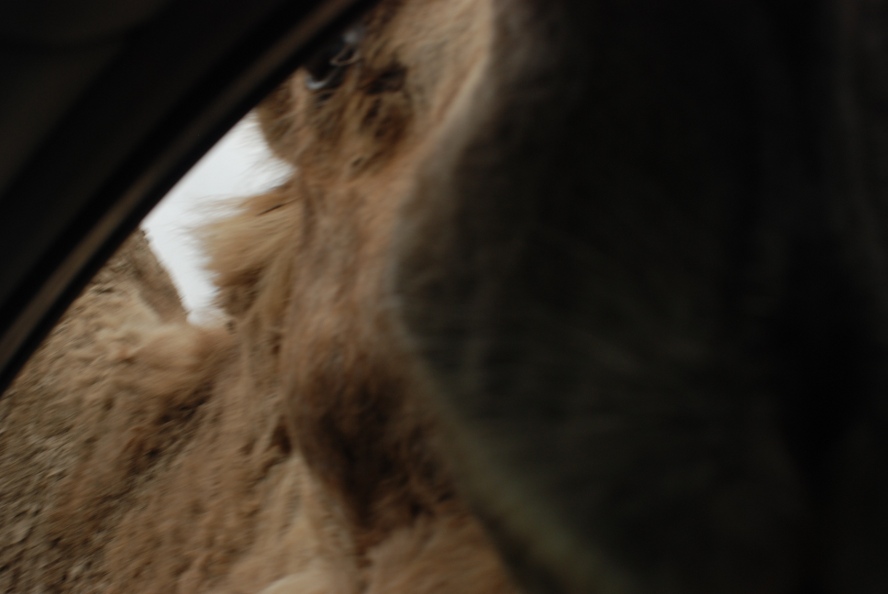 Llamas were less pushy but then we remembered they can spit as well. We left relatively unscathed. 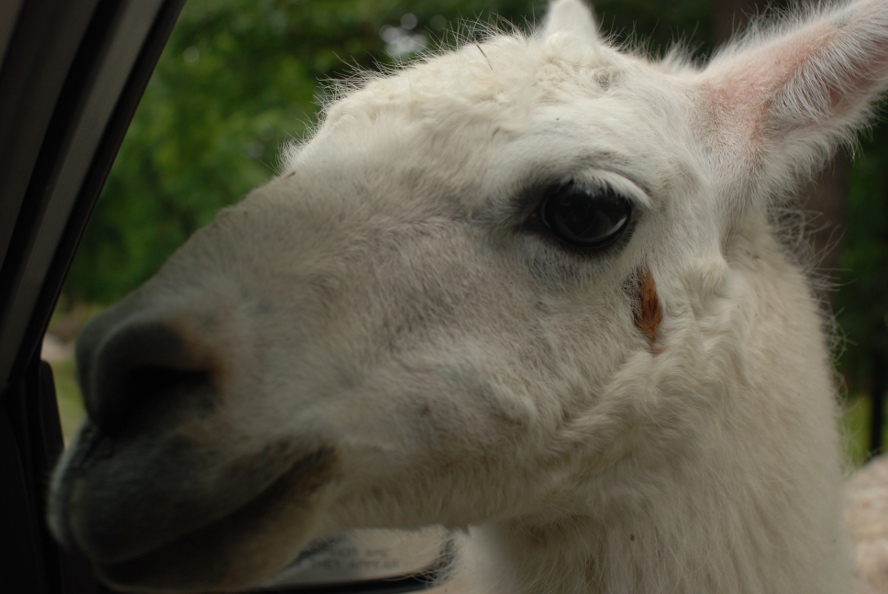 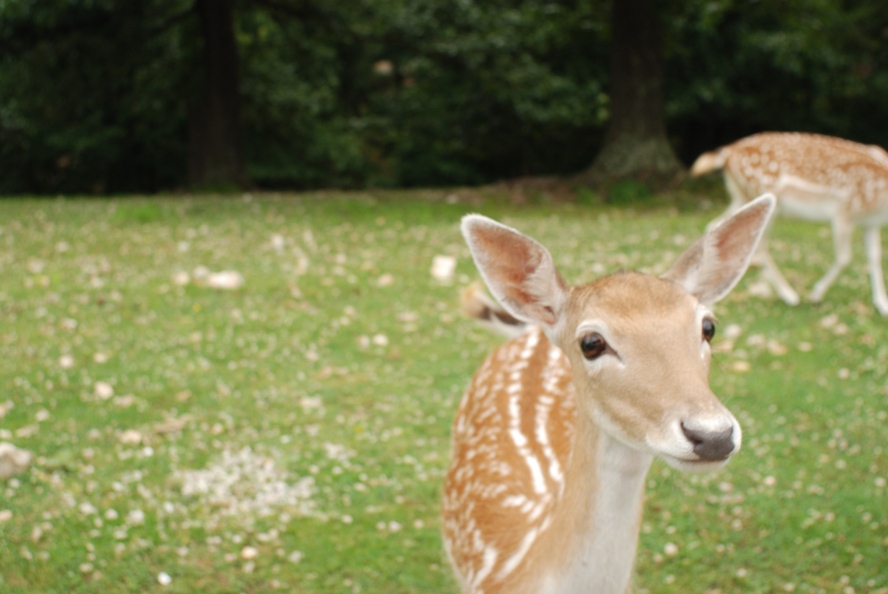 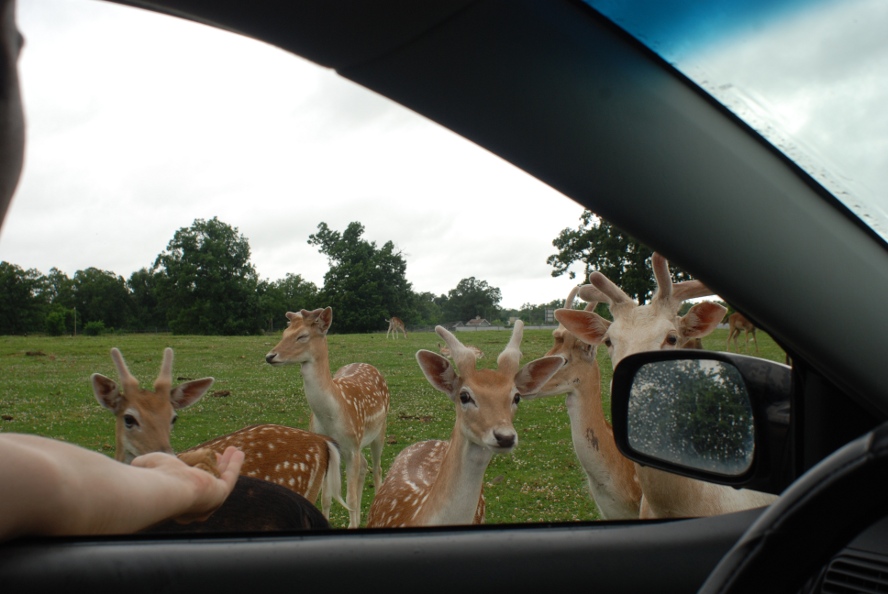 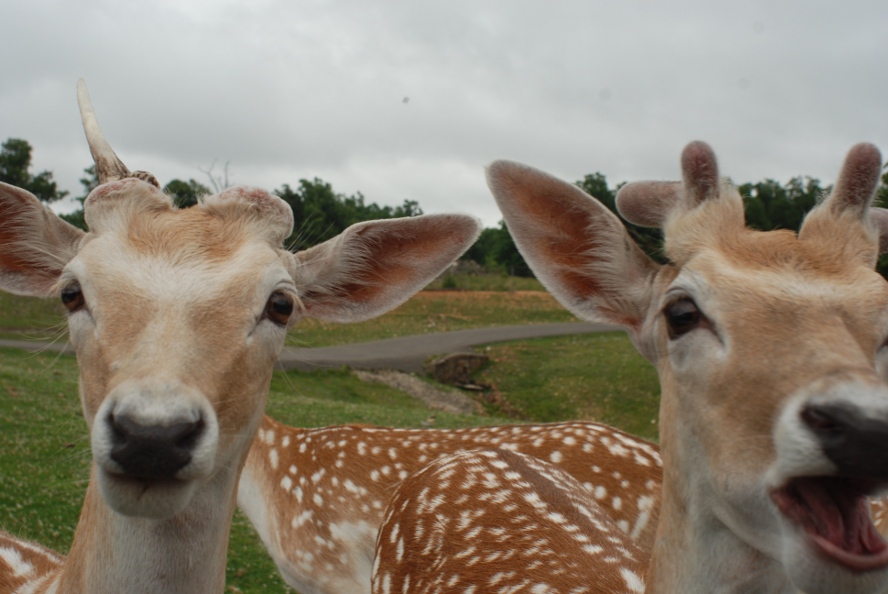 Ok they weren't that bad. They probably got the lion share of the food due to the sheer number of them at the park. They definitely keep the grass well mowed from what I could see.


Emu's were fun at first but then you start to realize they don't necessarily distinguish the food pellets from your fingers and they have monstrous appetites. The park is open so they can follow your car if you move slow enough. We had the same emu follow us to 3 stops before we figured this out. Once they are in your car there is a lot of ducking and weaving as an emu thoroughly inspects your car. Is that a cheese combo on your dashboard? Hey you're not supposed to eat that! A fun but stressful encounter....we didn't get a lot of good picture due to camera pecking and the camera lady dodging the emus erratic head movements. 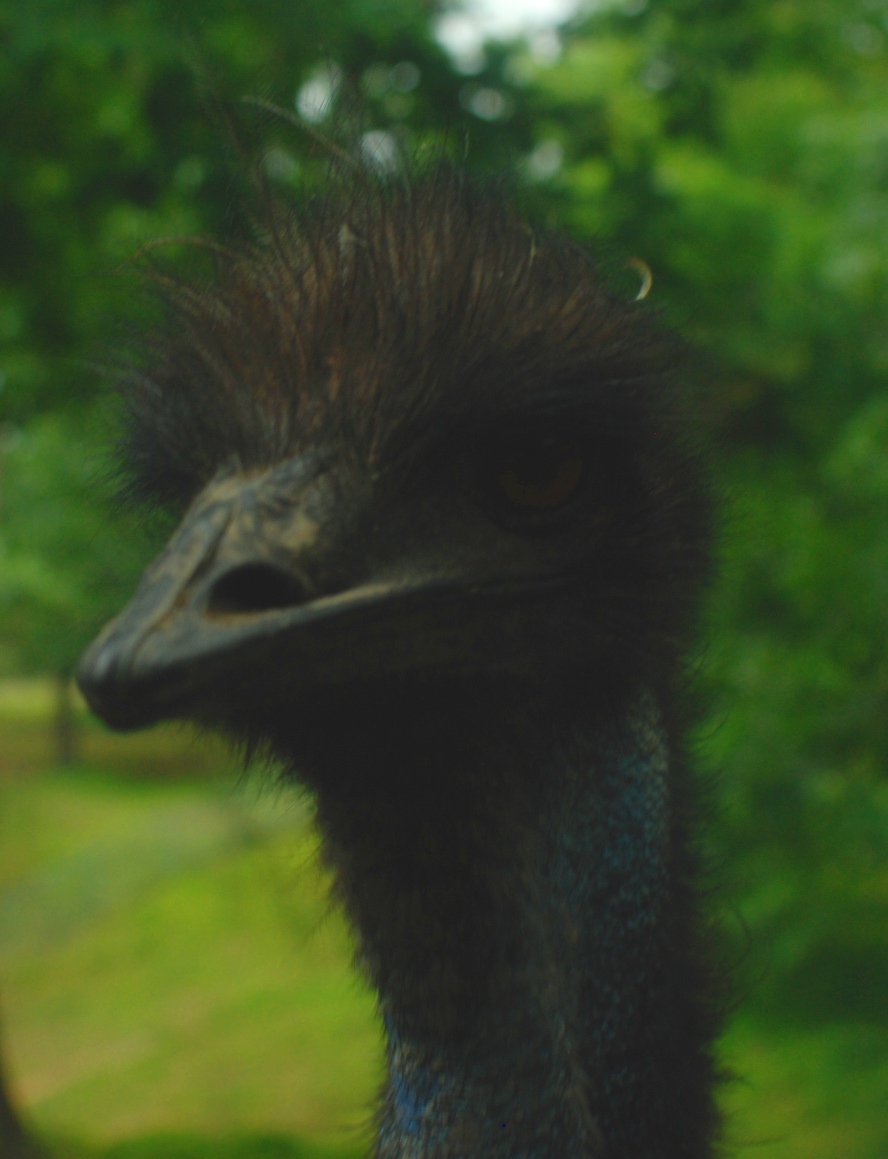 There are a lot of different grazers like these oryx that aren't necessarily treat crazed that you can drive by. If you're lucky you might get a brave one to come up to your car for a snack and manitory petting. 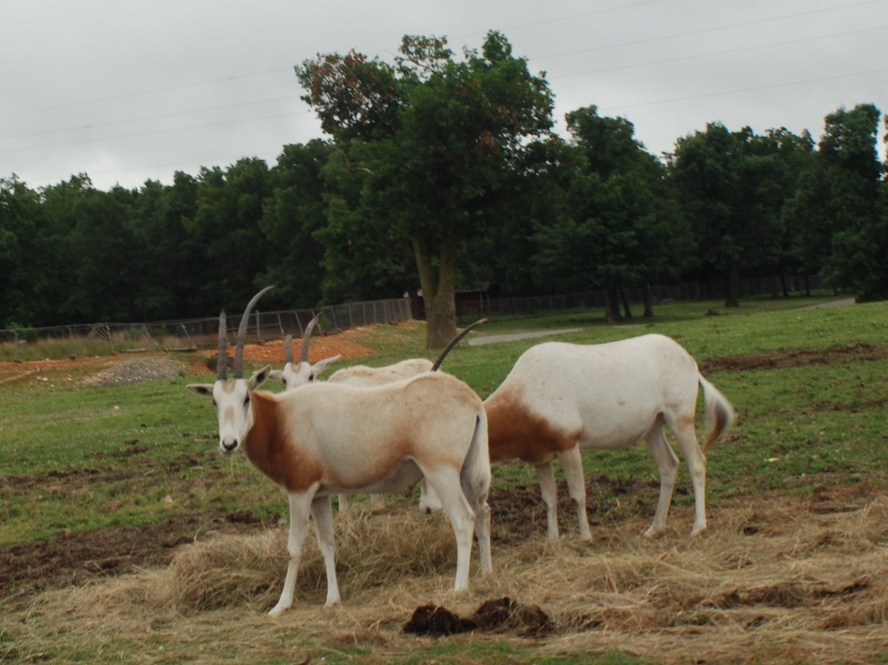 There are a few Zebras at the park and a whole lot of Zonkeys. We were a bit worried since Zebras have a nasty reputation but the ones at the park were friendly enough. 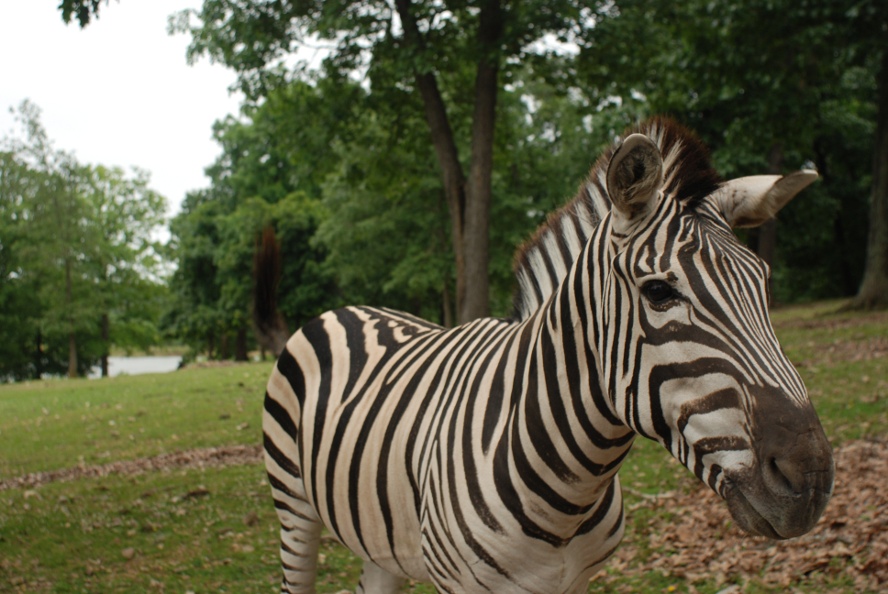 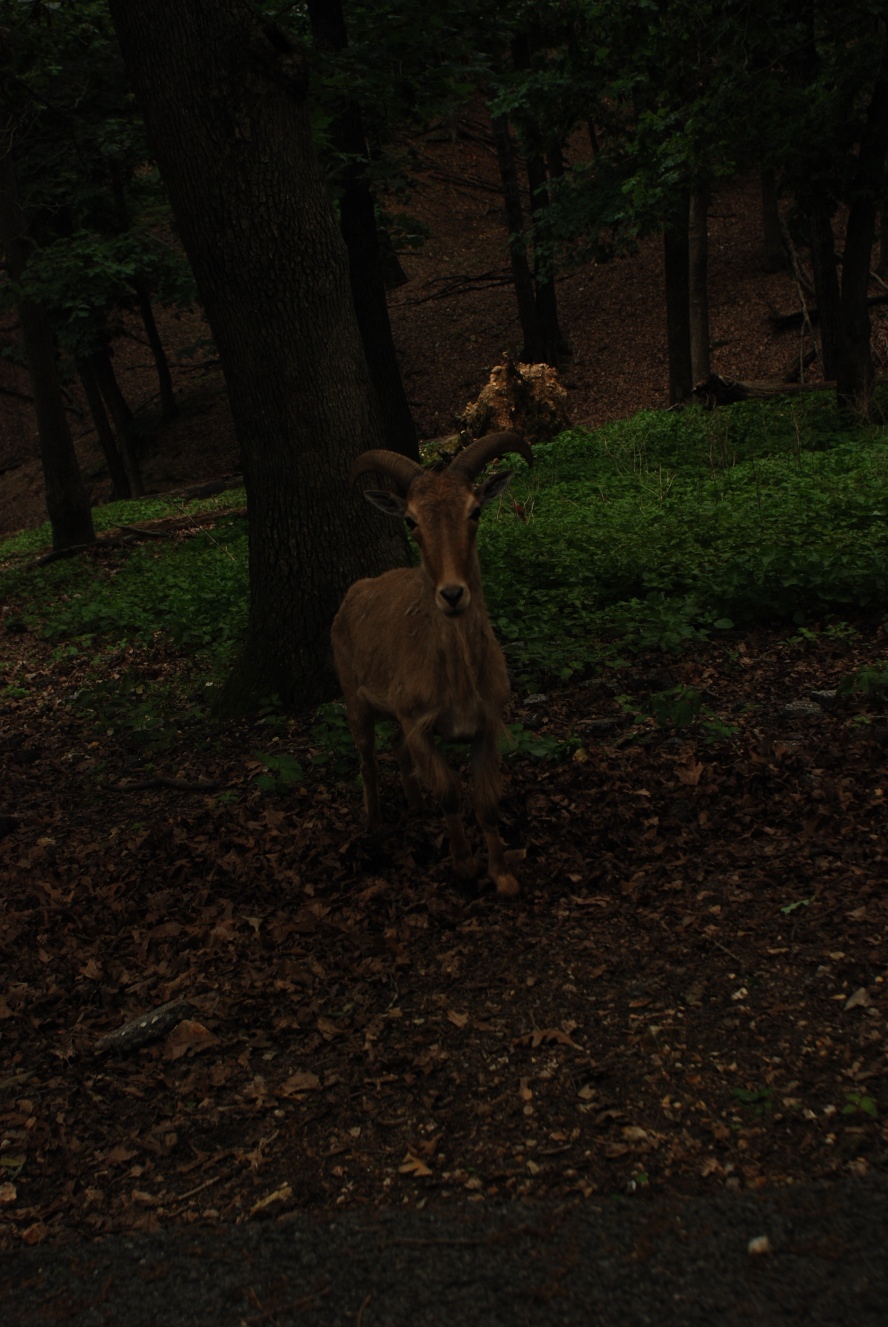 It is a very long winding road and by the time we got to this section we were starting to run out of food. We should have bought the family pack because we could have got up close and personal with a lot more animals at the end. Our bison just had a nice drink of pond water so they brought with them duckweed and an unusually large amount of slobber with them for the feeding. The baby was especially friendly and readily accepted petting. Mom worked my side of the window while her baby took the other side 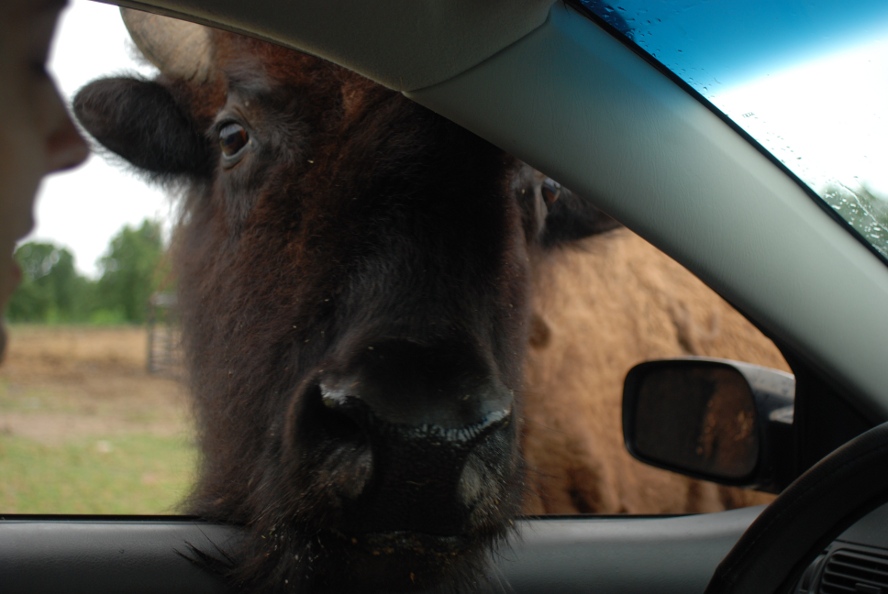 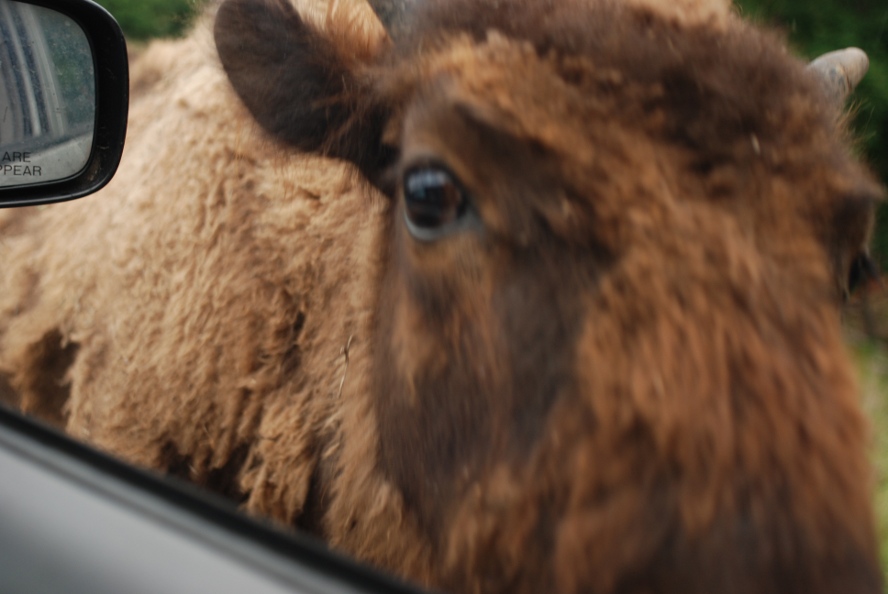 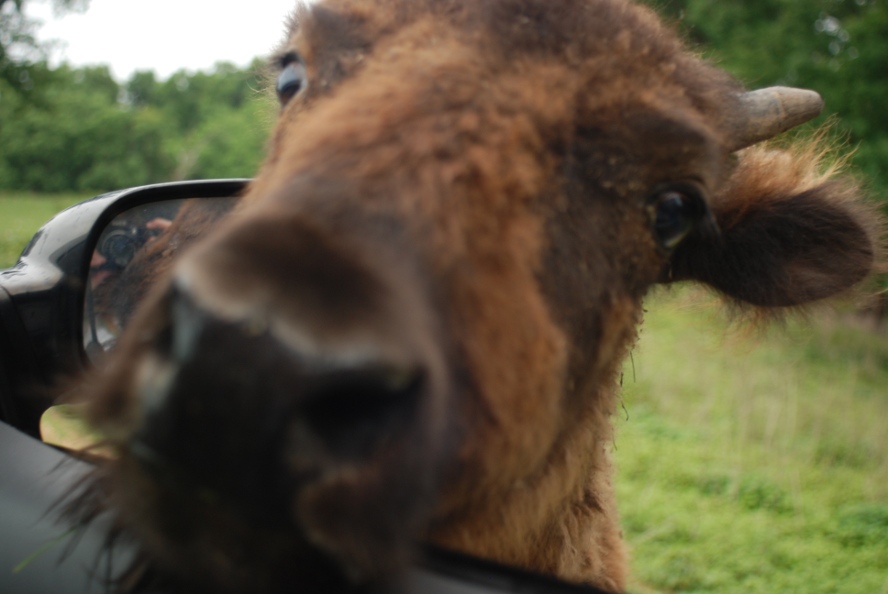 Just as the bison left we realized we were almost out of food. We had our window down and this Yak came behind them and stuck his/her head in the window before i could get it up. The Yak decided he wasn't leaving until he was sufficiently fed. After eating every scrap of food we had left we had a very hard time getting him/her to leave. The Yak was very slobbery with the same pond breath as the bison, but we lacked to food to throw out the window to make a clean break and its not like you want to trap a large animal in your car with the automatic windows so we were helpless

. After many licks and snorts and both of us laughing so hard we had tears streaming down our faces it eventually left to work the car ahead of us after a few minutes 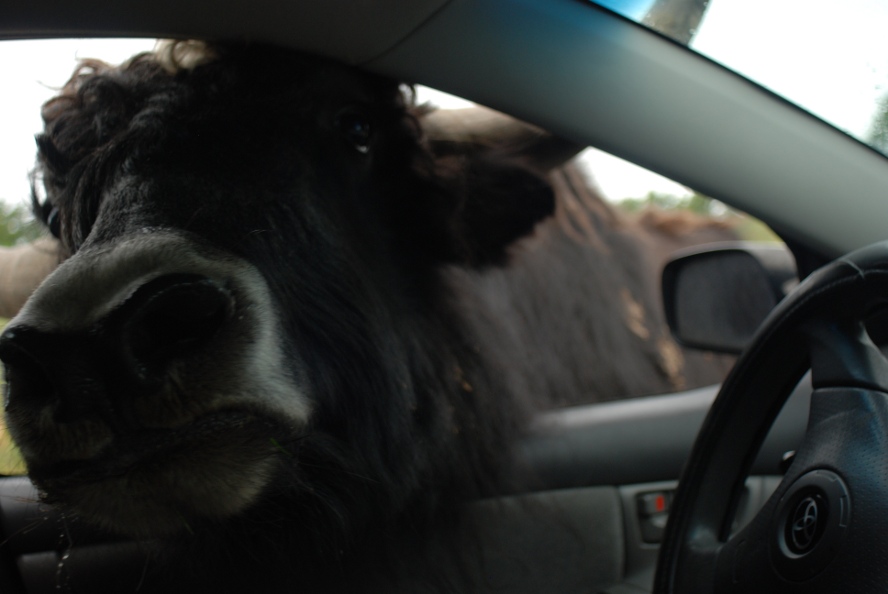 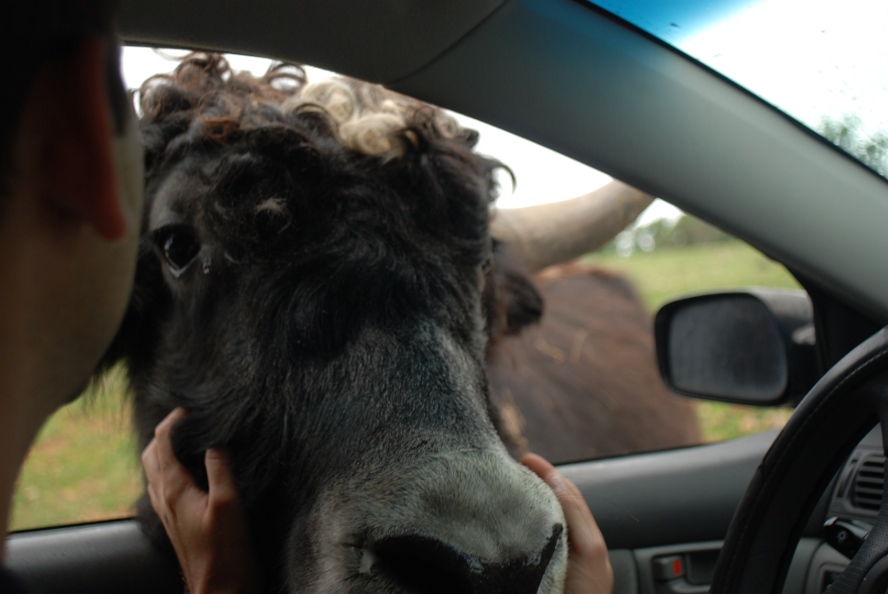 How exciting! They were so tame!

That was one the best posts i've read in a long time! Awesome! I wanna go there!
Thanks for sharing!

That sounds like so much fun. We have the Olympic Game Farm here in Western Washington, sounds very similar. A few years ago a friend and I decided to check it out not knowing what to expect. We were the first car there, and each bought a loaf of bread to feed the animals. We didn't make it past the first exhibit before we were out of bread. I turned around and went back to the gate and we filled the car with bread. I think we bought about 60 loaves.

I have never laughed so hard for so long in my life. The whole time I was expecting to lose fingers. They also had grizzlies that would do tricks for bread. and a mini exotic zoo, with a tiger that liked to spray men. I stayed way back from that cage. The only bad thing was my little hatchback was traumatized by a romantic buffalo.