Not sure if this is the right place for this query, but it does apply to a chick with a disability.

One of my silkie chicks, Teriyake - Teri for short, seems to have a sight issue in that he (I am almost certain he is a rooster - you know when you just feel it in your bones?) can run around, chest bump, hop on to a perch etc, but he is HOPELESS at finding food unless there's a lot of it in one place. For example, he often misses out on treats from my hand in the crowd because he tries to peck at them but misses most of the time. He gets so excited by the idea of a meal worm/egg/grit that he often pecks really hard in a kind of random way biting my skin (nope I don't mind too much as I feel sorry for him) and squealing. I have had him on his own out of the brooder and sprinkled treats and he gives up after a while. He can only get some if i have a handful and hold it to him.

It's a bit heart breaking as he is missing out in the crowd and it's making him behave territorially over treats as he tends to trample the other chicks to get to them and then misses anyway.

So, I reckon there probably isn't a cure...but has anyone else had this? Do you have any advice for me on adapting for him? I love this little guy so much - he's the first chick I ever hatched and he is my profile pic (from when he was a day old).

Any hints appreciated - thank you x 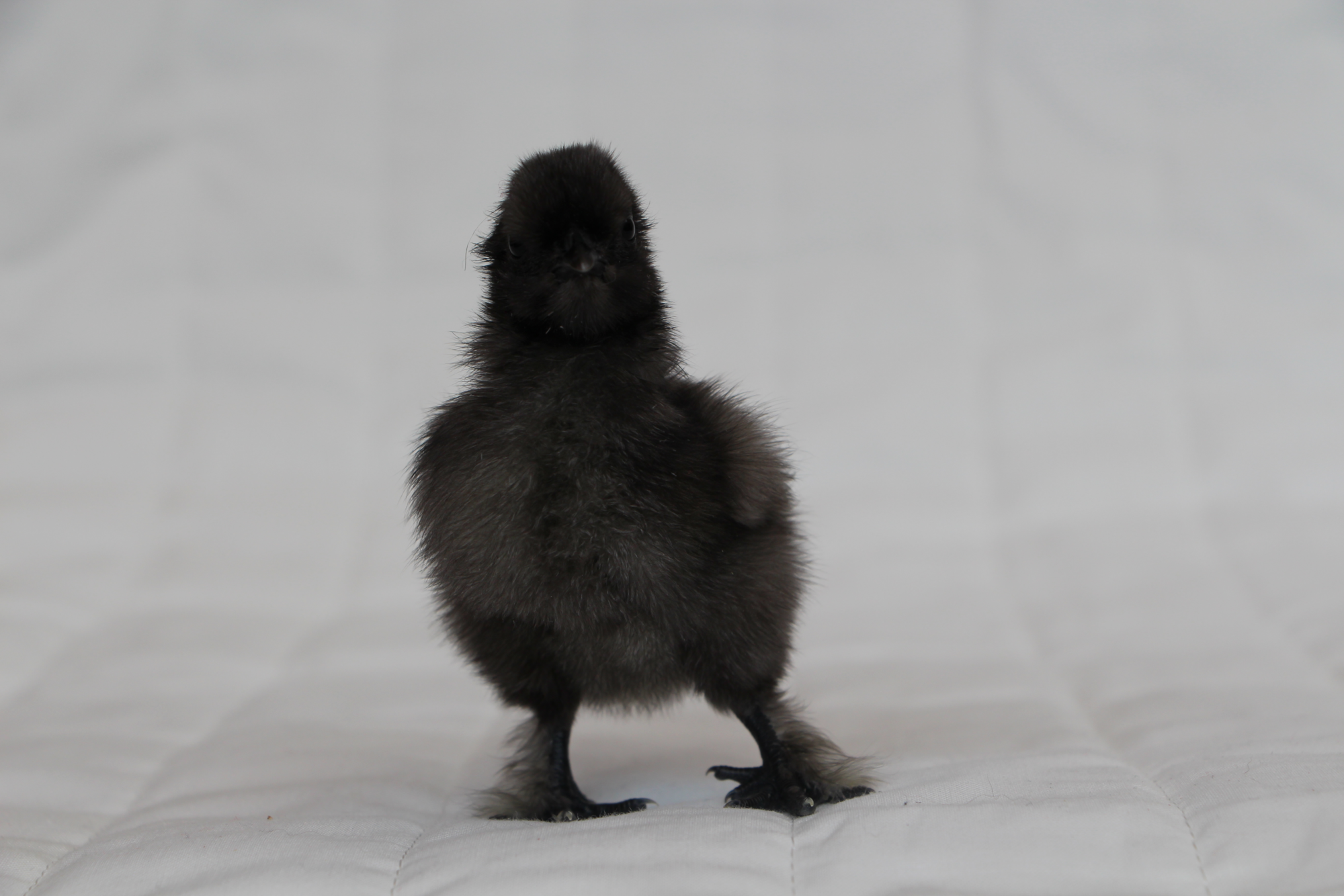 I've just been watching him peck around and he's not getting anything at all - can chickens have astigmatism? Is that a really stupid question?

Sorry, I have no idea about what vision problems can exist in chickens.
But here are a bunch of other thoughts:

Have you checked whether his beak meets properly? What you describe sounds like what happens with crossbeak (also called scissorbeak.)

Is there anything blocking his vision? I'm thinking lumps of poop stuck on his down, for example. Or extra fluff getting in the way. He's clearly too young to have crest feathers causing this.

For serving treats, you could put lots in one dish for him, pick up him and the dish, and then sprinkle some for the other chickens. That way he would eat from the dish while safely in your arms, and the others would pick it off the ground like normal chickens. And he wouldn't be in competition with them and shoving them aside.

It's probably obvious, but make sure feeders are sized right and filled enough that he can get plenty of the chick food. If you switch them to pelleted feed (instead of crumbles) when they get bigger, watch to be sure he can eat it--the different size/shape might give him trouble. (Or it might be better. If you watch, you will know.)

If you let them out to play in a grassy place, he will probably have trouble biting off bits of grass, but maybe he could practice and improve (maybe.) An entire lawn full of grass would make sure the others could not eat it all before he gets any

I would expect him to have trouble mating when he grows up--but you probably should not breed from him, in case his problem can be inherited by his chicks.
Last edited: Jun 13, 2020

Thank you so much for your reply and insights. It's not crossbeak and his beak seems to me to be about the same as the other chicks' beaks - I am no expert though. 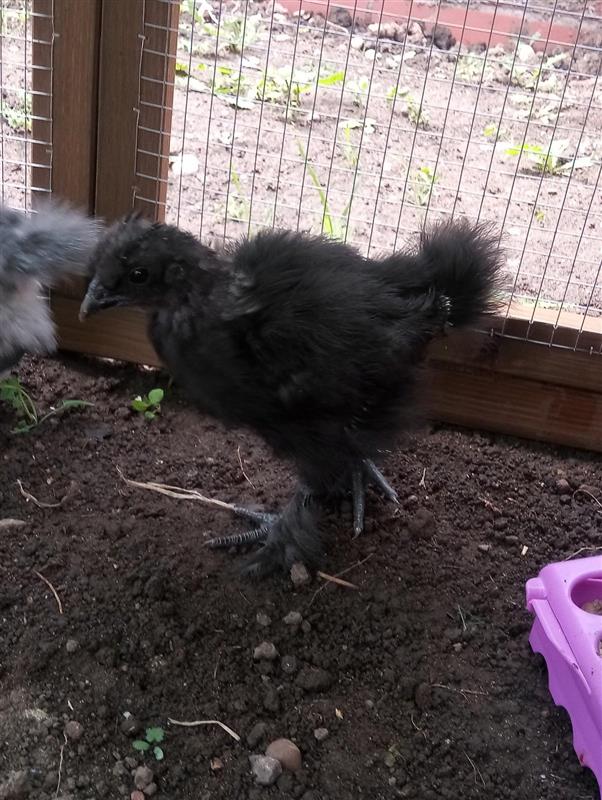 Here he is this morning (note his - see the streamers?- beak is a little mucky because he'd been pecking during his outdoor play today - but it's usually clean). He's a real cutie apart from the biting and frantic treat behaviour. However, funny you should say about the dish because that's what I did last night. I ground up some meal worms and then while he was higher than the others (he likes to perch) I fed him separately from a dish and it worked a charm. The next pic is him in the brooder: 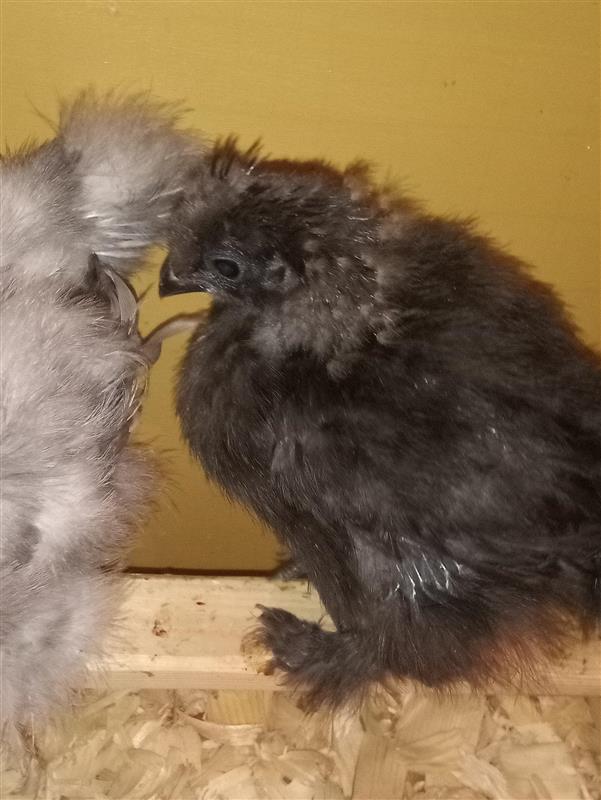 When he was outside this morning he was trying to peck something on the ground but his aim seems to be off by about .5cm - so it seems more of a beak-eye coordination issue. I doubt he'd be able to aim to breed if he tried

I hadn't thought about the pellet feed being an issue - so that's a helpful hint - but I will be keeping a very close eye on him to see how he gets on. I might have to get the food processor out again

His eye in the second picture looks to have a cloudy pupil which That is probably making him blind. How does the other eye look? Have you ever had any illness in the flock before?

Eggcessive said:
His eye in the second picture looks to have a cloudy pupil which That is probably making him blind. How does the other eye look? Have you ever had any illness in the flock before?
Click to expand...

I see that in the picture too now you have mentioned it, but I just scooped him out to have a look in natural light to see if it would be my AHA moment but it looks fine and the same as the others. Both eyes are very dark and no clouding. I have a feeling that the flash on my phone made that weird cloudiness but it's not present on him.

He's been like this since I started with treats (at a couple of weeks old) as everything else he does appears normal so I wouldn't have noticed before. He can't find grit on the floor so I make sure he always has a bowl of it handy. No illness in the flock before as they are my first chickens and I hatched them myself. The breeder is local and has no issues in his flock either. He's active and boisterous so I don't think I need to worry (do I?)

A
HELP! SILKIE CHICK WITH PROBABLE WRY NECK! WHAT DO I DO? NEED HELP