my muscovy drake is 4 months old and up until now i’ve had no issues with him being aggressive. i should also mention he is the only duck i have. he free roams the backyard now that he’s big and has become very territorial and attacks me when i go out to clean or feed him. he leaves bruises and cuts all over my arms. i read online that it’s best to hold their head down until they submit to show dominance but when doing that, he bit my face and wouldn’t let go, until someone else had to pull him off. i don’t want to result to rehoming him but i also don’t know how to help his aggression as he was such a sweet boy up until about 2 weeks ago! please help! 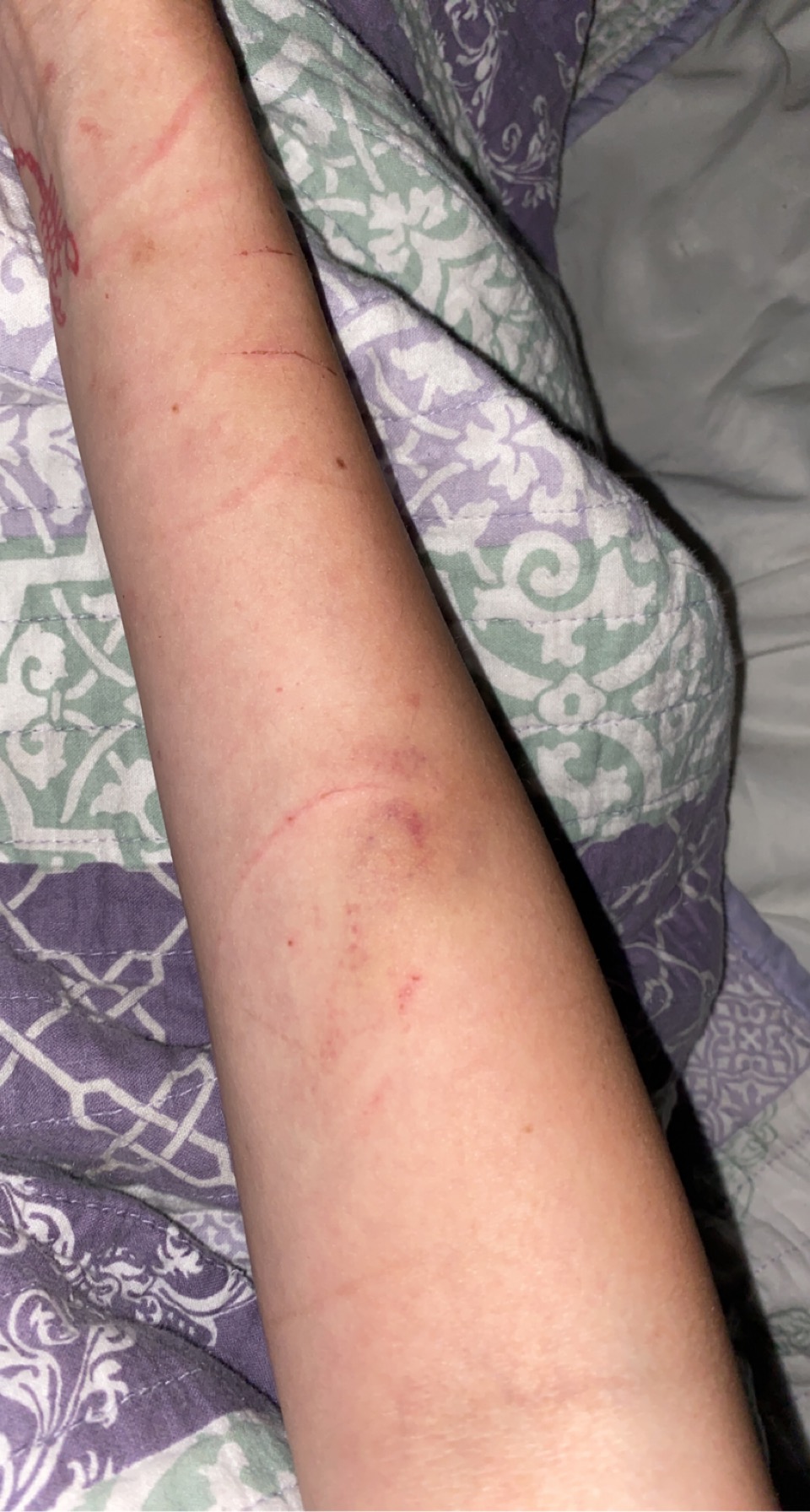 We got rid of our male muscovy when they hit 3-4 months old as they became aggressive. It didn't matter what method of behaviour modification we tried, they wouldn't change. We sold two and kept one, hoping he might calm down in the absence of the others, but he did not and with the safety of our kids at stake, we invited him for dinner. He was very tasty.

Are you trying to hold him when he does this? How old was he when you got him?
It sounds like he imprinted and is treating you like a flock member wanting to mate. Getting more females may help however, with a male bad behavior due to imprinting and being alone is hard to reverse.

As he is 4 months old, I would assume he is going through some hormonal changes and is desiring to mate / dominate. As astroduck suggested, getting him some ladies may help, but please be open to the fact that you may have to get rid of him. No one should have to have arms scratched up like that, or your poor face. There are lots of calm and docile drakes who could use a good home, if you still want a duck for a pet.

For aggressive or territorial ducks I always suggest getting some type of cage, I like using a large 4x2 rabbit cage, and every time you get bit or attacked, put the duck in the cage alone. Ducks hate being alone and I was able to get my ducks to correlate biting with being stuck in a cage for an hour, and eventually she stopped biting all together.

I say immediately after bite put the duck in the cage, and leave him in there about an hour, when you let him out if he goes directly to attacking you again just put him right back in for another hour and just keep it up until he stops.

Also since he is around 4 months old he is definitely going through hormonal changes and might improve behavior wise over time.

sierraleanne3 said:
i should also mention he is the only duck i have.
Click to expand...

SolarDuck said:
I like using a large 4x2 rabbit cage, and every time you get bit or attacked, put the duck in the cage alone. Ducks hate being alone
Click to expand...

Maybe he's hateful because it is the only duck the OP has. The duck is probably lonely and the only "flock" he has is the OP. He may see her as challenging his dominance. And wanting to mate with her.

But I'm a duck newbie so maybe I don't know what I'm talking about.

Its hormones. They will overtake a drake and they lose their mind.
If you hold him down, you must do so without letting up until he submits. He will sigh and that is when you can let him up. If he tries again, go back to pinning him. You must hold his head down with one hand and use the other to hold his body down.
You decide when to let him up, not him. He will continue to attack you if he thinks you gave up.
It works temporarily, but he's obviously attached to you since he does not have any other companions. I have pinned my drake like I mentioned above - especially out in the yard when there is no other option.
But, I also have learned not to let him near me without keeping an eye on him. He's quick to pinch my leg and sometimes I miss his signals. So, when I'm in the run cleaning and he decides he needs my attention, I will get a broom out and keep it near me. For some reason he doesn't like the broom. I've never hit him with it, just its presence is enough. Sometimes if he doesn't see it, I grab it and sweep towards him, but that's it.
My muscovy drake is now 3. He's quite the character. He still wants my attention and will follow me around. Just this summer, I decide to pick him up and toss him in a fresh pool of water. He loves it and will actually bathe. He forgets about me then.

Getting him females will definitely take the pressure off of you, but he is attached to you and it may never really change. My drake has had females since the beginning and I didn't baby him, but I think my mistake was hand feeding him. A lot of people suggest hand feeding, but it can make some ducks more aggressive especially when they want you to give them a treat. I would never let him bite my face though. That's off limits. My advice is to definitely not let it get to that level.
Maybe pen him up or section him off somewhere else while cleaning and getting his food around.
S

HollowOfWisps said:
Are you trying to hold him when he does this? How old was he when you got him?
It sounds like he imprinted and is treating you like a flock member wanting to mate. Getting more females may help however, with a male bad behavior due to imprinting and being alone is hard to reverse.
Click to expand...

i got him the day he hatched. he used to run around with me and follow me in the house and chirp whenever i left his sight and now every time i go out to feed him or clean his area he attacks. he has good days where he doesn’t but for the most part i have to redirect him by putting his head down for a few minutes.

My Muscovy drake is the same, he was raised by me because his mama rejected him so he imprinted on me, I have to be honest I imprinted on him too. lol
He is now 10 yrs old and for the most part a good boy, he has his moments when he forgets who I am and will bite me . But I can put him in his place by holding him down and making him stay there for a few minutes then let him up and he is usually okay. Sometimes it takes 2X but That is usually all. My drake has female Muscovy so he does give them most of his attention. Having an only drake he is looking to you as his mate.

N
Is my drake aggressive?

A
Need help with aggression in mallards