Anyone else take chickens to a nursing facility??

Today, it was starting to thunder and our most docile, friendliest, sweetest chicken came up onto the deck (which they don't usually do), jumped on the table and started bawking in the window trying to get my attention. I went out and cuddled her a bit and she relaxed and snuggled in. I had been getting ready to see a friend who lives in a nursing facility and thought maybe i would take Lady along for a visit.

I had her in my arms and went down the cellar to find something to carry her in, emptied out an old tote, put one of the chicken towels in the bottom, grabbed some scratch and meal worms for a treat and put her in the tote with another towel draped over part of it. She was very docile and settled right down. Luckily the drive wasn't too far because I was patting her, talking to her, etc the whole way and hoping she wouldn't jump out, fly around the car, fly out the window at red lights, etc.

Anyway, she was a very good girl. sat on my friend's bed and let herself be patted, ate some green jello off her lunch tray

and looked around bawking-talking the whole time. She even pooped on the towel I had spread out instead of on my friend's pillow, blanket, nightie etc, which made us both pretty happy! LOL Unfortunately, she also jumped on my friend's head and scratched her face (I felt awful about that), so maybe that would disqualify her as a therapy chicken, but I did think she had potential until then.

anyway, when we were leaving, i was carrying her in the tote and she kept putting her head out to look around. Some of the residents were in the elevator with us and had never touched a chicken. They all asked if she would bite, and when I said no they were so excited to pat her. So, I don't know if she's going to be a therapy chicken, but. . . it's an idea. Of course, I would only have her sit on a person's lap on a towel if I was going to do that -- no getting on someone's bed and walking around when they were lying down.

Anyone else ever do something like that?
Last edited: Sep 5, 2011

I use to bring my cat Zia to a nursing home! Every one Loved her.
I used a cat stroller, and a harness.

I think thats a great IDEA!! to do it with gentel chickens!
you will need a chicken diaper!

Awww...I think that would be a great idea, just have the residents wash their hands before and after. Best for your sweetie and for them. Immune systems may not be up to par.

I too have taken my dog to the nursing home but never thought of taking a chicken.
I think the folks at these places would love the surprise of seeing something new.

Our 4-H poultry club took chickens to one this summer ,it was a big hit, They LOVED them !!!!

Perhaps consider getting a nail grinder to round off her nails with? That might prevent "accidental scratches" in the future in case she suddenly feels flighty.

It doesnt seem like nursing homes would allow chickens. considering birds are dirty. No offence my sweet chickens

have not been to a nursing facility, but I DID do the school show and tell years ago. and the dollar store lst week..... it was so funny, and she just loved it. she just LOVES the truck ride. I put her on my console with a blanket and she just hangs out.

I never have, but I belong to the Shenandoah Valley Poultry and Garden Club, organized by Patricia Foreman (author of Chicken Tractor, City Chicks, Day Range Poultry, etc.) and she takes chickens to nursing homes on a regular basis. She calls them therapy chickens and one of her hens named Oprah Henfrey is a certified therapy chicken. She only takes the most docile and tame chickens that are used to being around and handled by people. She works with them and specially trains them before taking them to nursing homes and schools, though.

She tells the story of a man that had been catatonic and unresponsive until she put Oprah Henfrey in his lap. The picture of him stroking the hen brings tears to my eyes.

You should also get permission from the facility before bringing in any kind of poultry. One concern is that some people are very allergic to chickens. My brother is in a home and he is severely allergic to chicken feathers and chicken meat. Anaphylactic shock allergic. Chicken feather allergies are not all that unusual, so you would need to be careful that the nursing home is aware of when a chicken is brought in to the facility.

If you are truly interested in doing this, go to the library and get the book "City Chicks" and read about therapy chickens on pages 275 - 277.

Here is the picture of the catatonic man stroking Oprah Henfry: 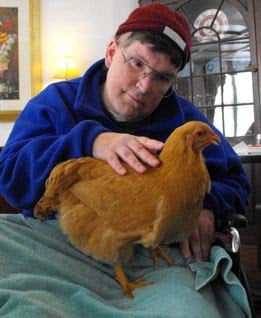 This young man is catatonic and his response to Oprah was the most animated he had been for a long time.
Thanks for letting Oprah brighten these people's lives, Pat. And thanks for sharing the experience with us.

See the rest of the story and pictures here: http://poultrybookstore.blogspot.com/2010/01/therapy-chicken.html

S
Why is it always the favorite chicken who gets sick?