I appreciated the conversation about Border Collies, and thought I would start one about another of my favorite dog breeds the Australian Cattle Dog, aka Blue Heeler. As a small child the first dog that I wasn’t afraid of was a female Blue Heeler. A family friend gave her to us as a pup. Years later as a young Adult I got a male Blue Heeler, but he started going blind at about 3 years old and by 5 years he was completely blind.
We now have a female Blue Heeler that we got after I married. My wife had never had a dog of her own, but her grandmother had a Heeler that she was around and remembered from her childhood. We named our little Heeler Jip after her grandmother’s dog. Jip or The Jibble as we often call her is quite a character, a little fat dog with a big reputation. She is a house dog but also helps me with cattle. She can get cattle to move easier than I can an she takes a lot of steps off of me. She is wary of strangers but most people that are around her much come to like her. She does better around women and children than with men. She gets along with me good though and also she took to our tenants pretty quickly. She loves to go to the barn with me to feed cattle, she is jealous of our chickens. and whines while I feed and check on them. She is always ready to take a ride in the truck or side by side. She can’t get up into the tractor with me like my Border Collie could. She has a stubborn and a bit of a mean streak but she is food motivated so she isn’t too hard to deal with in those times. Its amusing to watch her as she bites the trash can or a chair or table or whatever inanimate object that we move. When we call her off of something she will be so worked up that her mouth is quivering and sometimes to the point of foaming at the mouth waiting for a chance to bite whatever she object we moved. i could go on and on about her antics, but enough from me. What about y’all anybody have a Heeler? Love them? Hate them? 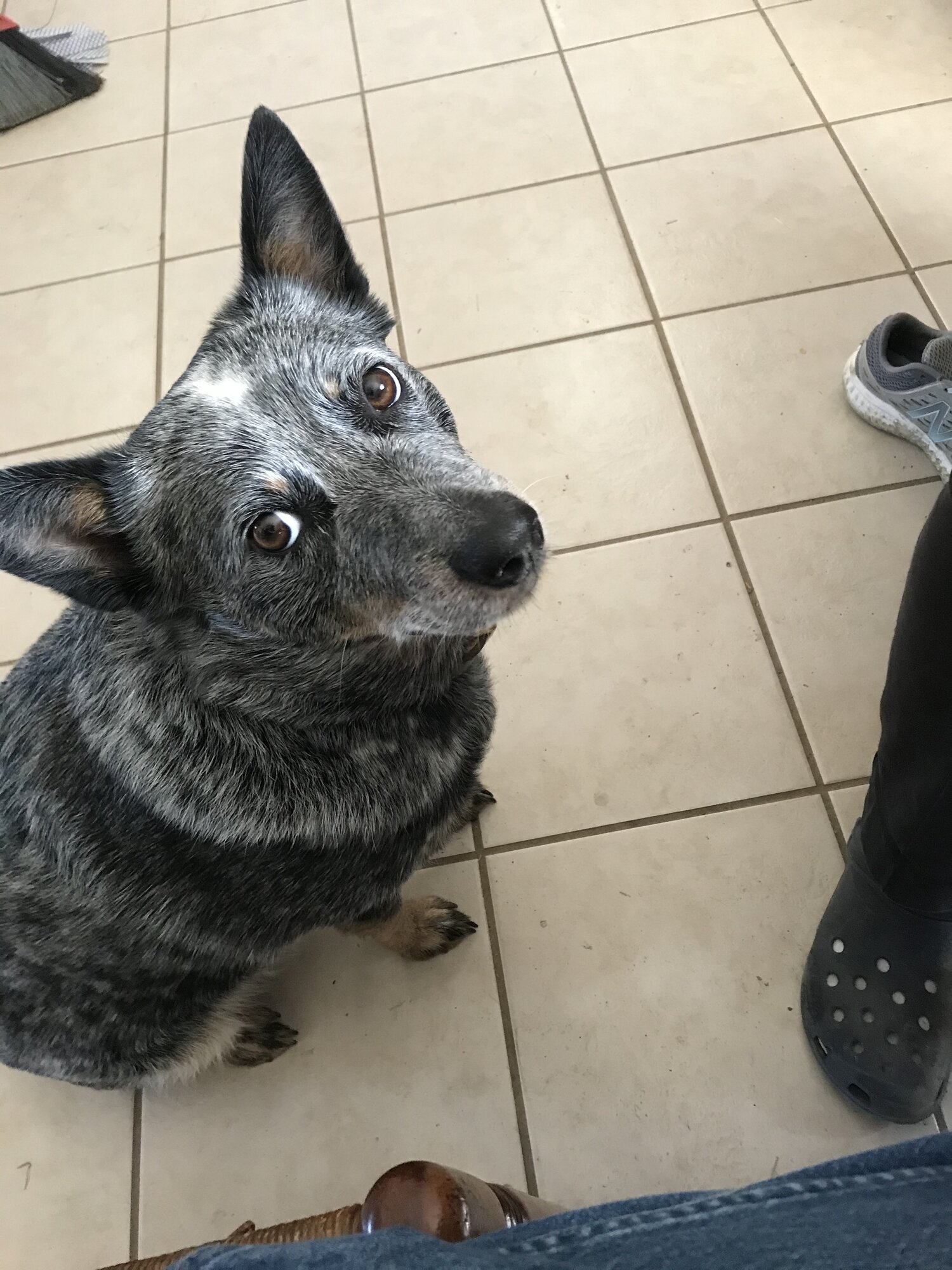 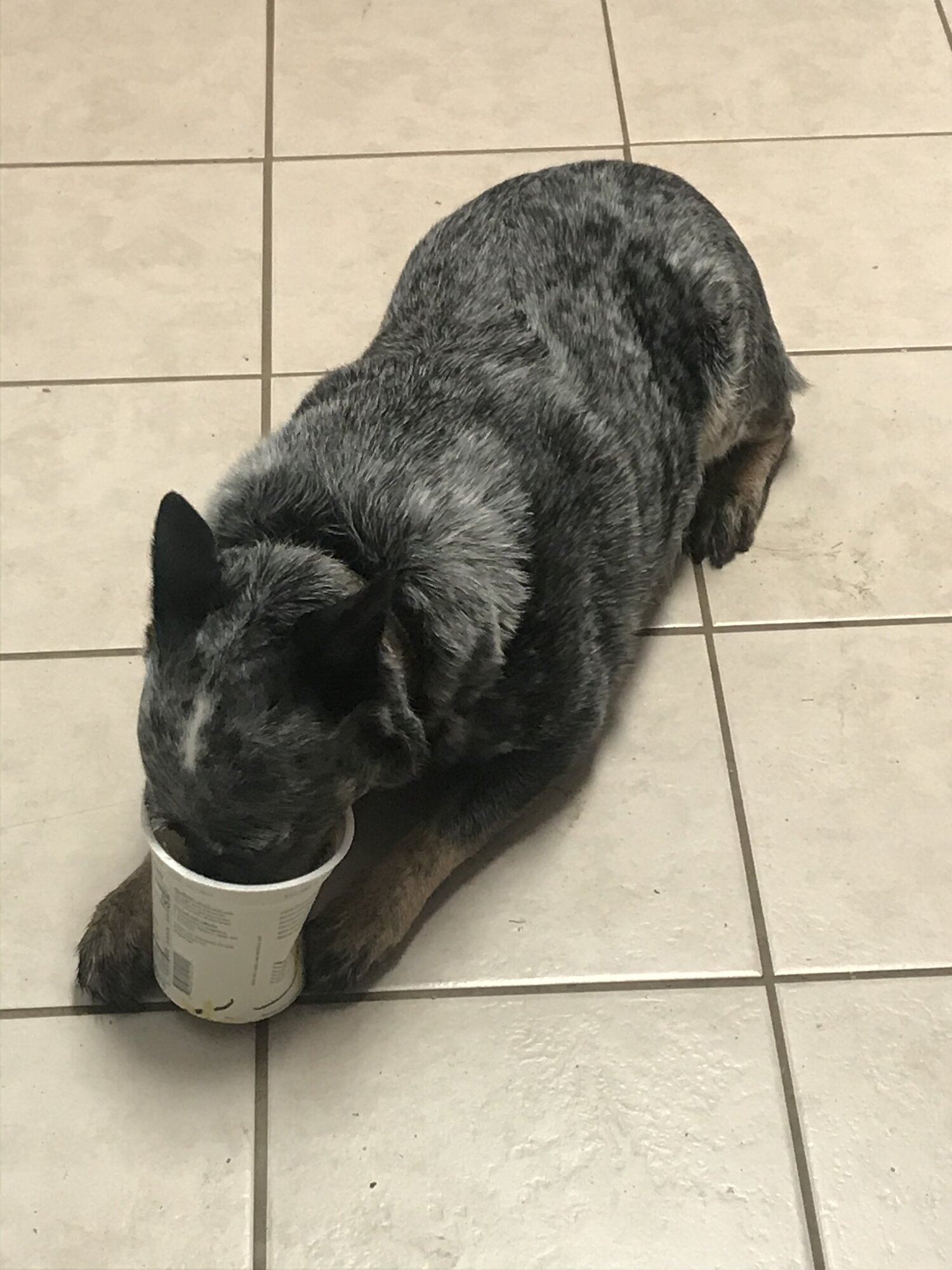 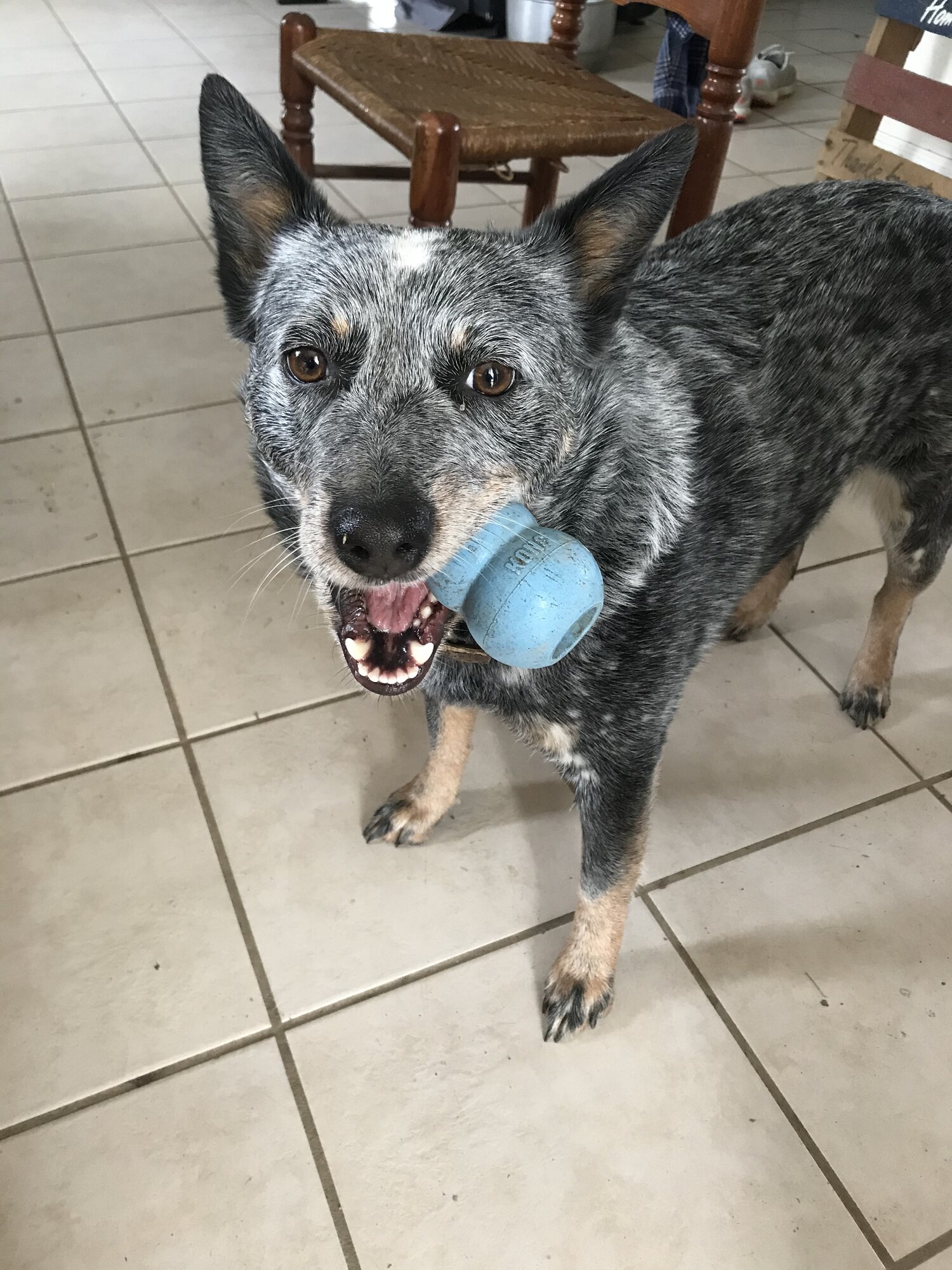 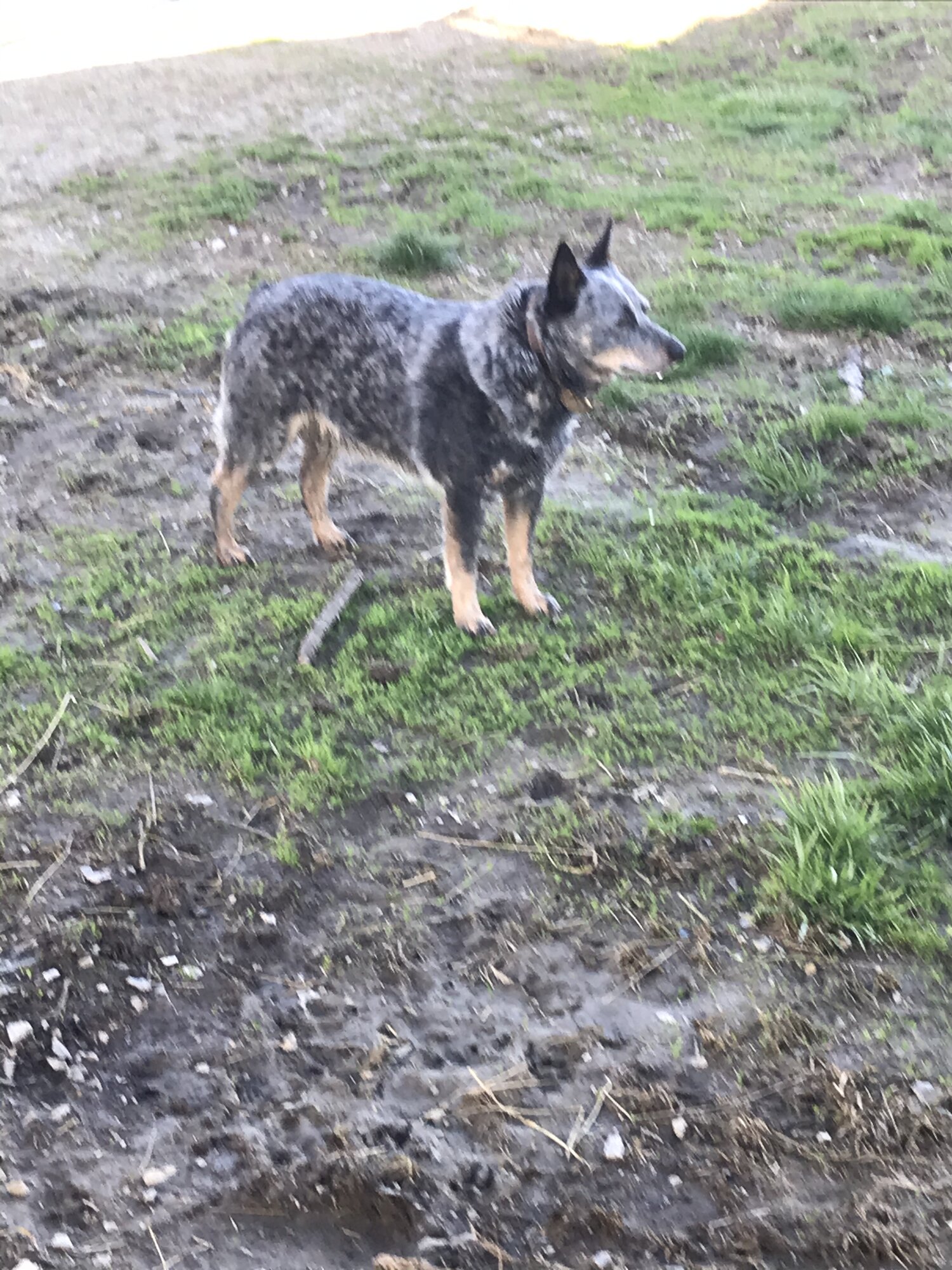 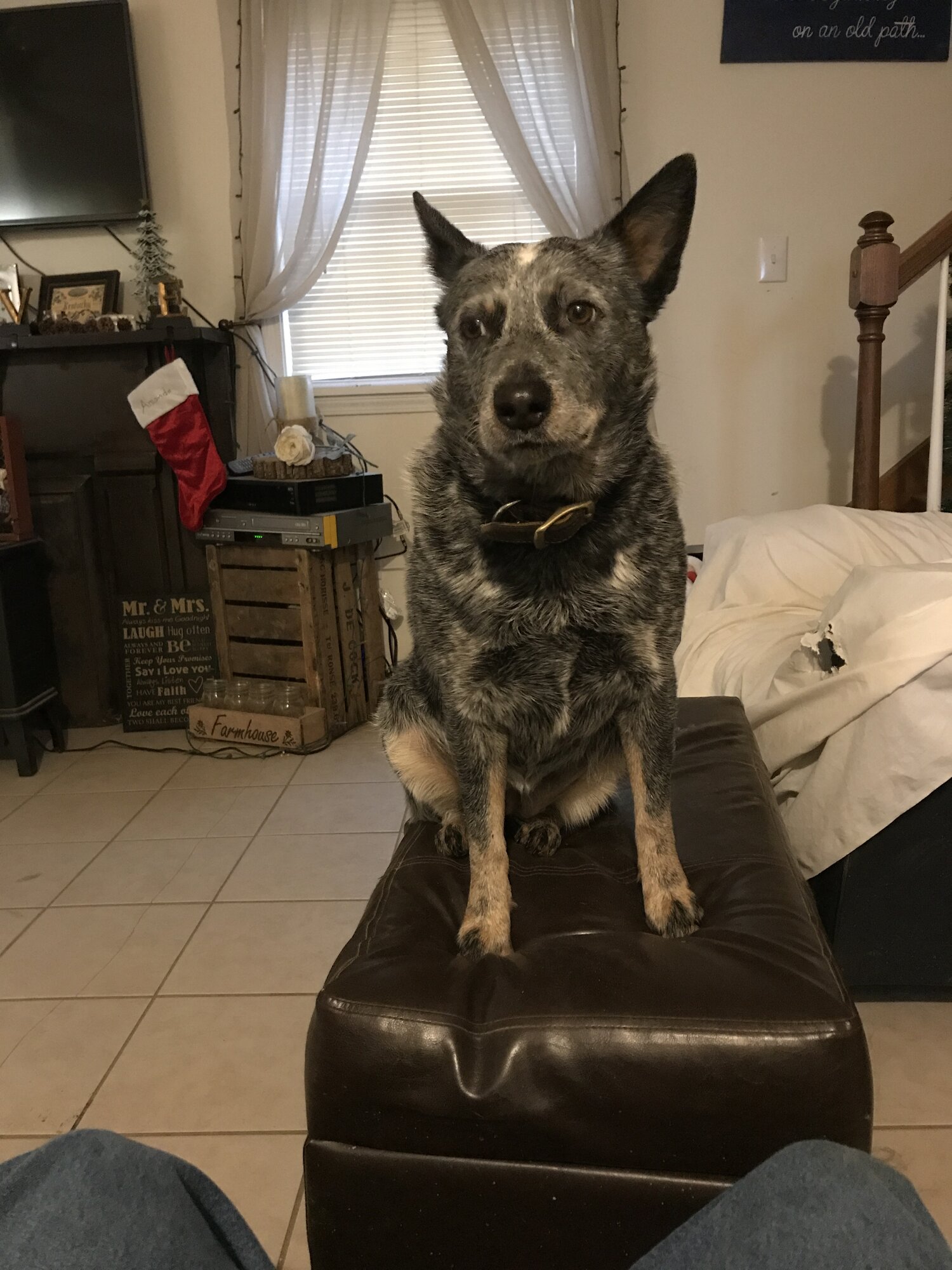 Jip sounds like an amazing dog (and pretty too)!

Growing up we had a blue heeler and she was a fantastic dog. She loved herding cattle and the horses.
I don't have enough here to keep a Heeler busy or I'd definitely have another one.

I posted this on the Border Collie thread, and posting it here also, my guy is ACD/Border collie mix.

littledog said:
This is my border collie/blue heeler mix. We got him from the friend of a relative at 10 weeks old - the person was taking really bad care of him. No training, locked in a room too often, fed crap, no vet care.

The day we took him home, he threw up a whole TV-dinner lasagne in the car, and had a horrible case of tapeworms. After getting him vet care and a healthy diet, he was the easiest pup to house train I've ever had. All it took was about two weeks of keeping track of his potty schedule, taking him outside and praising him. He understood right away to not go potty inside, and there were only two or three accidents total before he always pottied outside.

But, we didn't realize exactly what it was he understood - one time when he was about 3 months old, we took him hiking for the day and he really enjoyed the trails. That evening when we got home, he went into the yard and with a big sigh of relief, and let loose a racehorse-level of pee. We finally understood, he thought he was only supposed to potty in our yard! Not anywhere else, even if it was outside!
He understood when we said "go pee" he'd heard this in the yard so it didn't take long to teach him other outside places were OK.

We took him to obedience training, and he passed (barely) his Canine Good Citizen test, but he was basically the class clown. He was mostly all about socializing with the other pups, barking when the instructor was trying to talk, winding the leash around my legs with a big snarky-tongued, waggy smile. It seem like he was ignoring all the instruction, but as soon as the class ended he would do all the exercises exactly. He was like the brilliant kid who is bored with school and acts up in class, but can do the assignments flawlessly when he chooses to.

He grew up when he about 2 years old, when we took him on a hike down by a shallow but fast-moving river. There were small stony islets, interspersed with deep channels, and he decided to chase the birds. He ignored us calling him to come - suddenly, he leapt for a bird and ended up in deep, fast-moving water. The look on his face was priceless when he realized no matter how hard he paddled, the river was going to take him someplace he didn't want to go. We grabbed his harness and pulled him out, and he looked proud, like he'd won something. But he never ignored us calling him to come, ever again, until he lost his hearing.

He was about 4 when we moved to our current property, with a couple acres. My hope was to take him to agility classes, he would have enjoyed that but his knees couldn't hold up, thanks to backyard breeding. He's been happy exploring the fields, going for runs and bike rides with us along our local trail, herding the chickens - he understands that certain animals he should protect (the chickens) other animals he should ignore (wild rabbits) and other animals are fair game (squirrels, he's never caught any but loves to chase, and rats that he's occasionally caught)

He's now 14 years old, and he's had congestive heart failure for the past year. He's been on medication for it, which has kept it under control, but we recently found out he has cancer.
We decided to not subject him to cancer surgery - with his heart issues he might not survive anaesthetic, and why put him through an invasive procedure that would make the time he has left more limited and painful than enjoyable - so we're going to just keep him as happy and comfortable as possible, until he lets us know when he's not happy or comfortable any more. At which time we'll say goodbye.

For now, he still loves walks, eating his meals, going outside, sniffing everything in the field, teasing the rooster, chasing squirrels, barking at people and dogs on the trail.

Sorry this is so long, and not really in tune with the rest of this thread. But my boy was, and still is such a lovely, funny, and wonderful dog.
Click to expand...

littledog said:
I posted this on the Border Collie thread, and posting it here also, my guy is ACD/Border collie mix.
Click to expand...

Our Heeler/BC mix pups are going on two years old and are super smart and obedient to come and to go to their shed when needed. The litter of five were easy to house train except for one. He evidently got his wires crossed at some point. Their Heeler mother learned to try and trick us in various things even fake peeing at times when my wife would tell her to. She also had a habit of picking up and eating inanimate non food items and learned that we would try to trade her a treat for what ever was in her mouth. She still will grab something on occasion now and bring it to us for a treat.

Their tricks are so funny - they can definitely outsmart us at times!

Awe! She's a cutie! Growing up I had a Australian Shepherd and red heeler mix. He was an amazing dog. He was very observant of us kids and watched every thing around us. We could do whatever we wanted to him and he wouldn't even flinch. He fathered a couple litters of pups who all grew up to be great dogs just like him. It was great bc he helped during the birthing and everything. Was right by momma's side the whole time and cared for his babies like he was mom. I sure miss him! 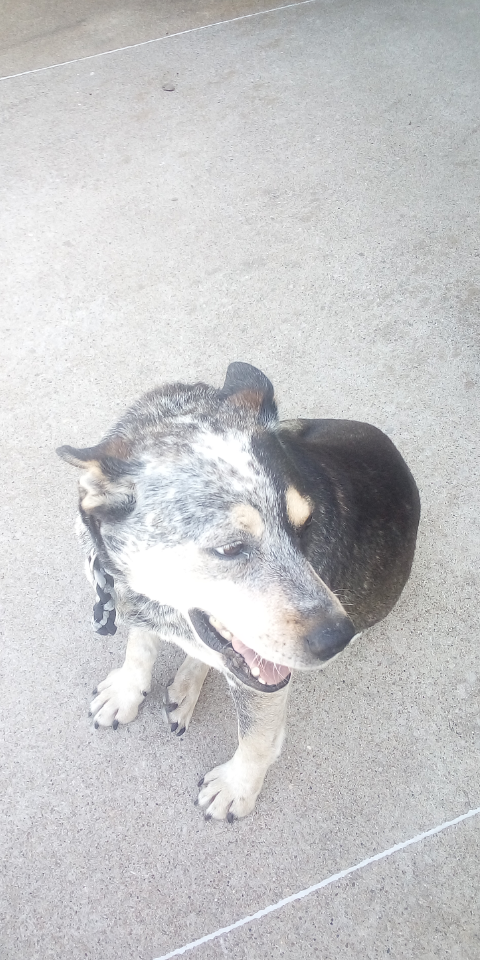 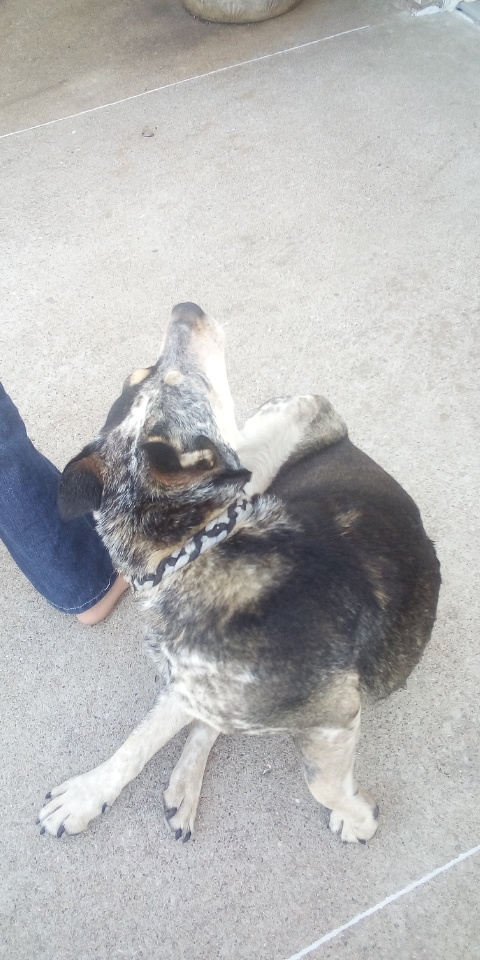 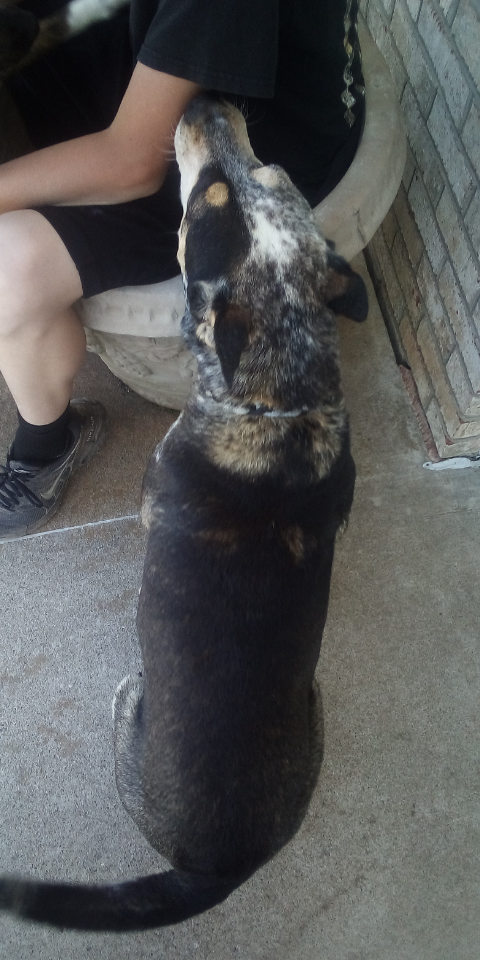 This is my best friends heeler mix named Jade

This is my purebred blue heeler named Trixie! She is a farm guard dog and working goat herder. She came down with heart worms last year so we’re now just giving her a place to live out the rest of her life. She’s 10 YO. The great pyr in one pic is a 6.5 YO rescue named Chloe.
I have more silly pics, just couldn’t upload them all.. will work on that tho 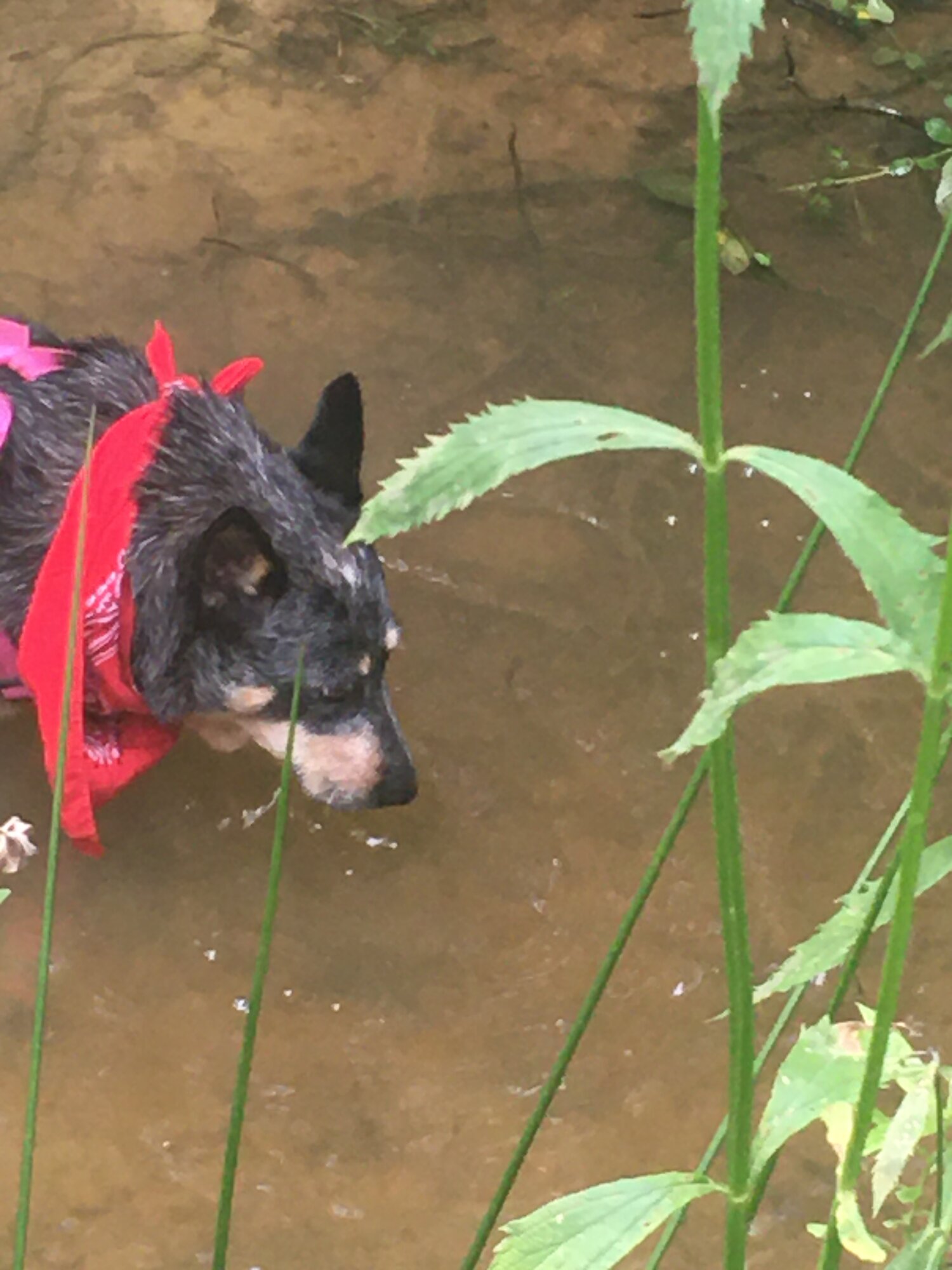 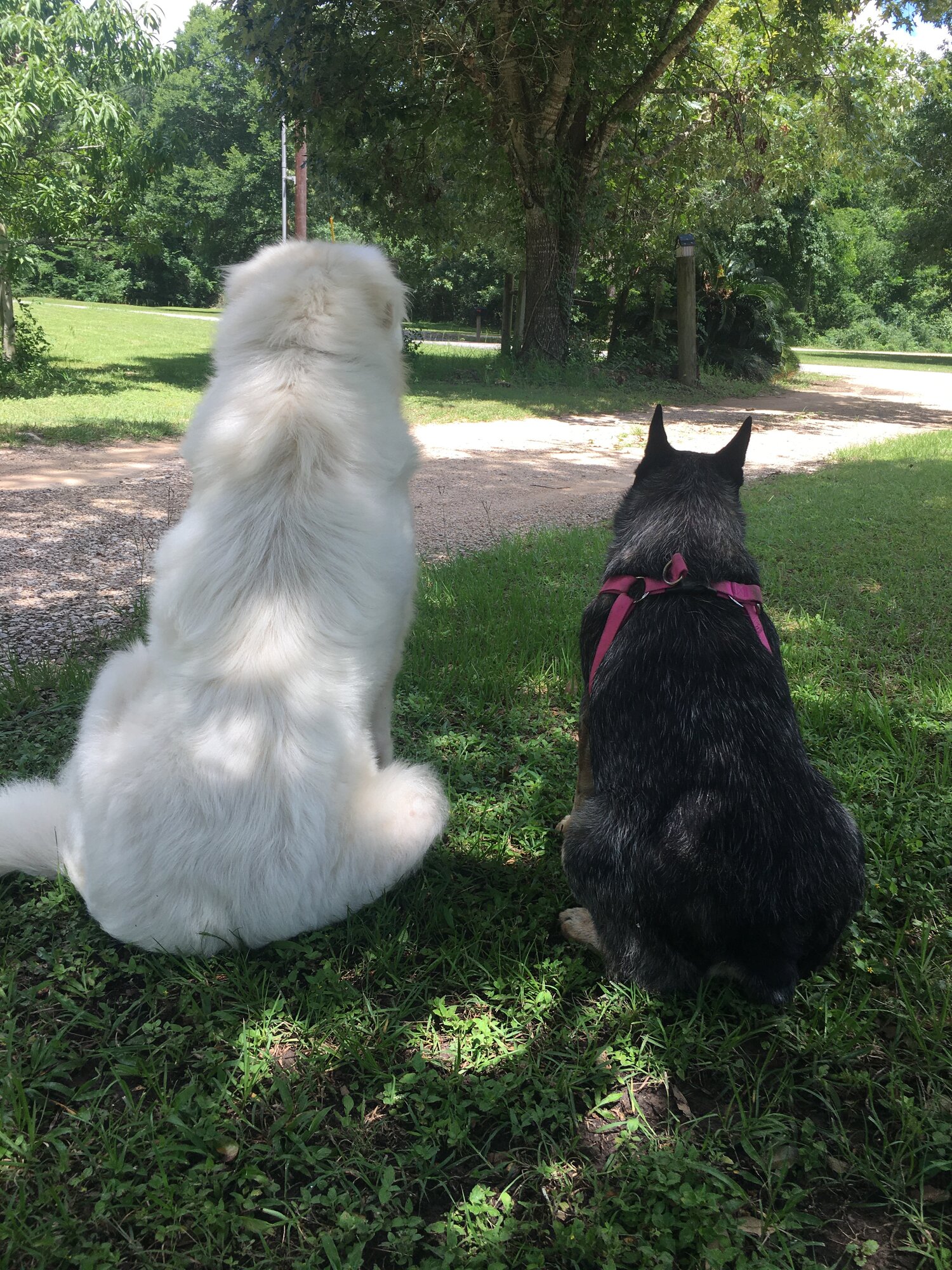 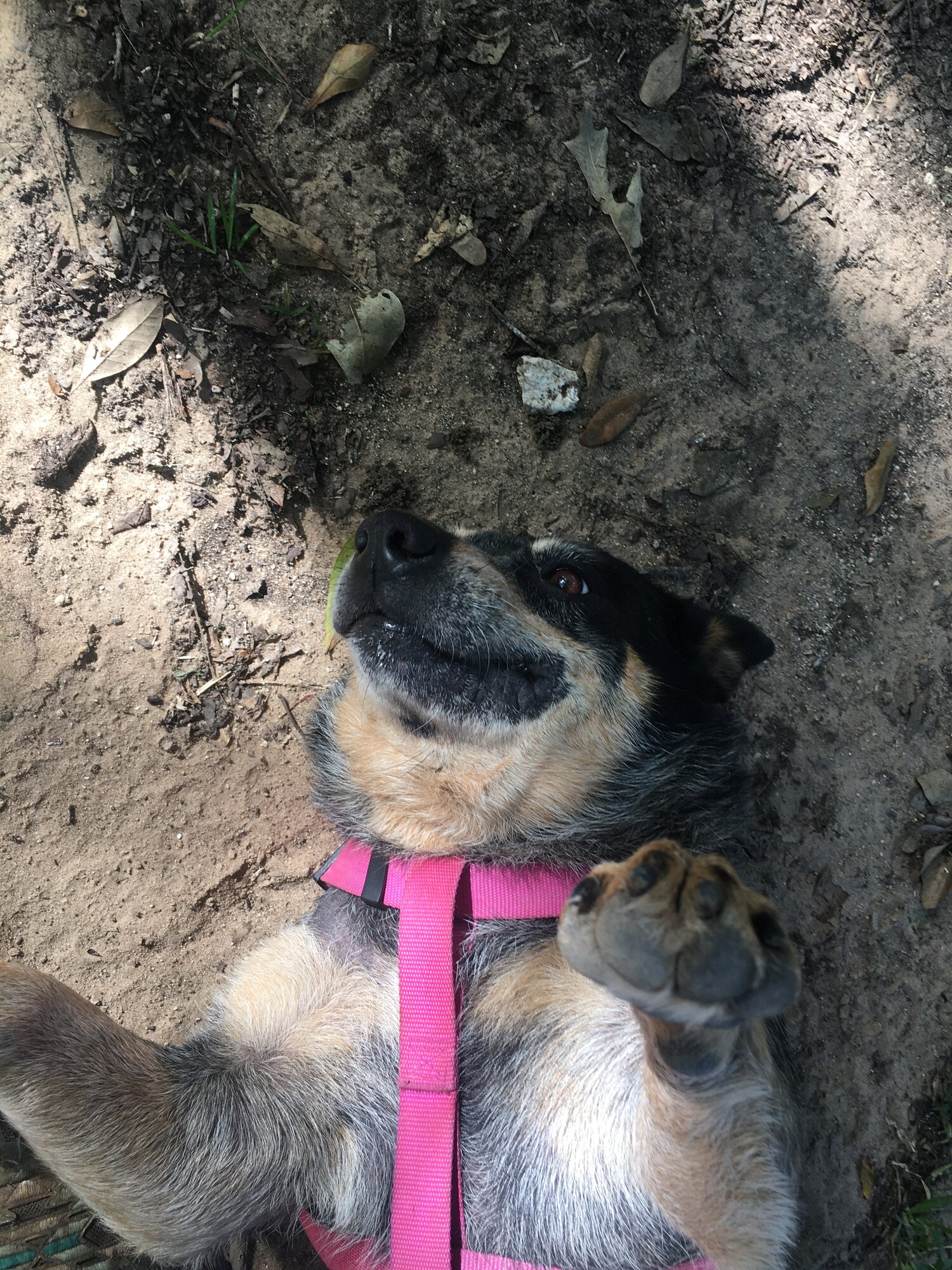 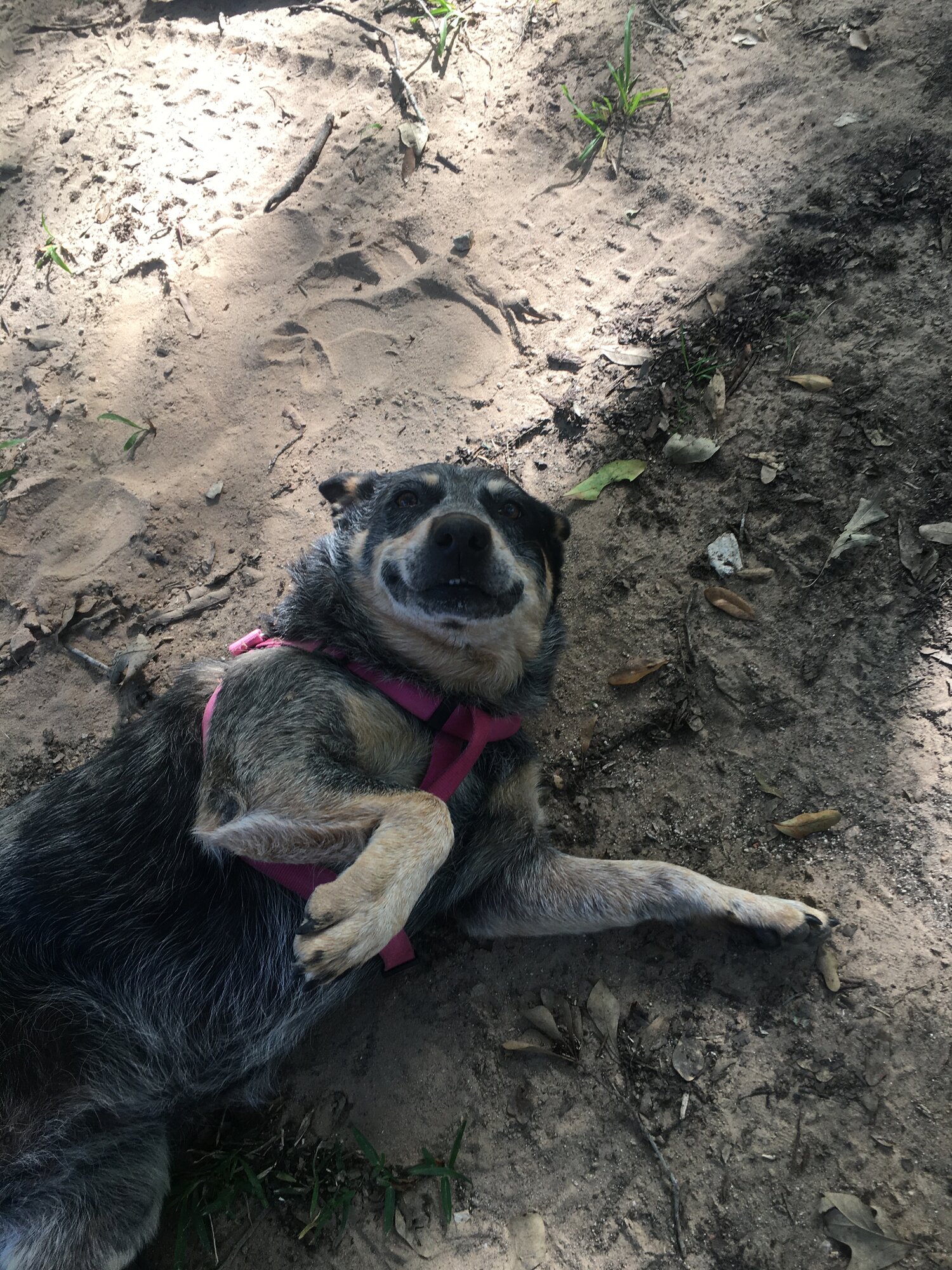 What dog breed would you recommend?

Working on getting her use to people