I started feeling bad that we have not been getting up as early now that it is summer break and our son is not going to school. I had found plenty of plans for horizontal or vertical sliding doors, but not much for swing doors. Luckily (sort of) I had a bout of insomnia that led to scavenging around the garage as well as a $20 Amazon order (would have been $10 but I threw in an inline battery display). Next day took a trip to the local Pull and Pay yard and got the antenna in decent condition for $5.

I had already planned on picking these things up for the redesign but with the earlier days and us sleeping in longer I decided to make a short term solution as well. Enter this very basic and ugly contraption. Basic premise it that each morning at about 6am, the antenna activates and pushes the door open. Then at 6:01am it retracts back in. It is angled in such a way that it will cause the door to swing all the way. On the outside of the door and on the wall of the coop are magnets. Once the door opens the magnets hold it open until we get out there to attach the actual hook. So far the magnets have done really well to keep the door open but I would not trust those to hold it all day or in wind stronger than a stiff breeze.

I originally planned on making it so that it would close automatically as well, but i decided against it. I like the piece of mind from checking the coop/run one last time before all the creatures of the night come out. 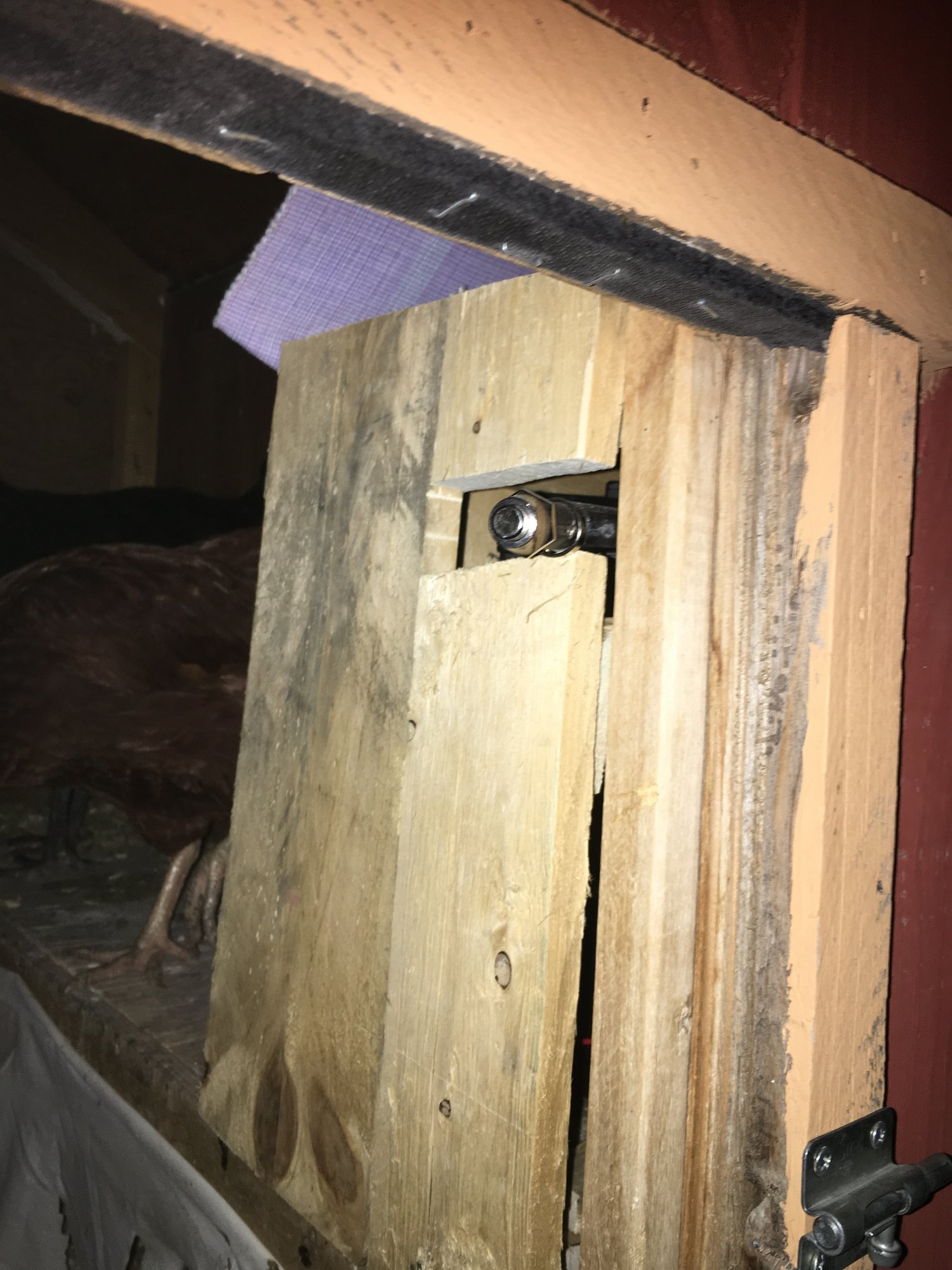 This you can see where I cut out a notch from the door for the antenna to pass through. There is a small finishing nail that I used to 'aim' the antenna on the other side of it. I also hung an old cloth place-mat angled from the top of the box to the wall to prevent them from trying to roost on it. (They were all confused as to why pictures were being taken at bed time and the one RI Red there hopped over to investigate) 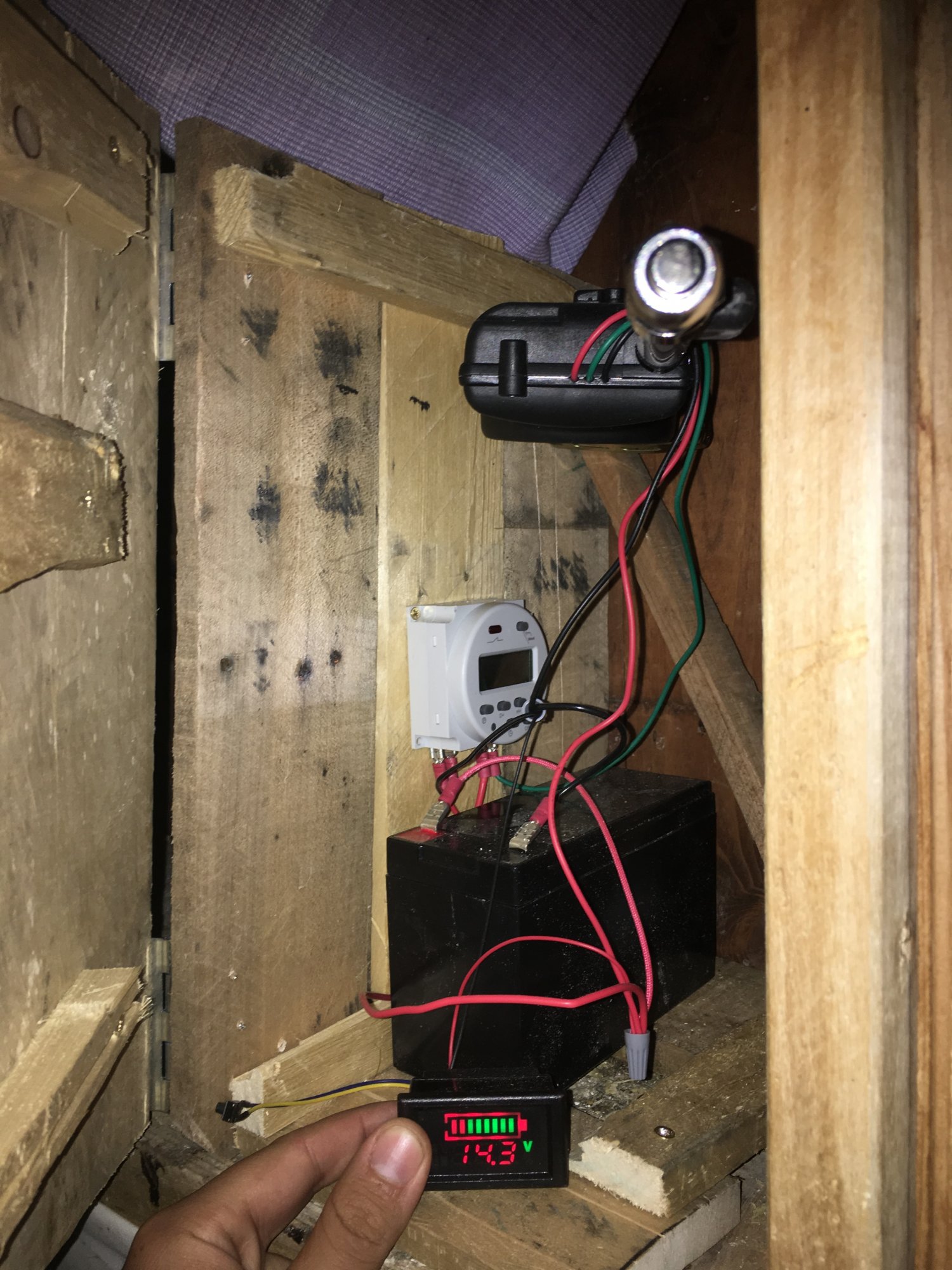 Metal bracket holds the antenna to the wall. Timer I got on Amazon for $10. Works great but had to look up the wiring guide because the paper that came with it didnt make any sense. The battery is way beyond oversized for the antenna motor but it was originally for my son's ride on toy but he outgrew it. I knew there was a reason I didnt get rid of it. Battery monitor needs to be adjusted for that specific battery type. The default setting on it is 14.3V but can be adjusted for the 12V L-A battery. Box was built from scrap materials I had from various other projects. If anyone is interested I can post a wiring guide for this. I modified the the various 'pop door' blueprints down to less wiring without causing unnecessary heat buildup.

Hope this can be helpful for people looking to modify a coop they already have without major renovations. Everything is built into a modular box that weighs at most 10lbs and can be easily slid into place without altering the existing structure.

Do you think it holds it closed securely enough to keep something like a raccoon from prying it open?

The short answer is 'No'

Currently the door is shut at night but there is nothing 'holding it' closed. The magnet is on the outside to hold the door open. I am currently looking at ways to be able to both lock the door at night as well as have the push opener. I have a completely enclosed run that is fairly resistant so not having the coop door locked is a risk I am taking on. In the last year of the new run materials we have not had anything other than field mice get it (that we know of) and we have had times where their coop stayed open overnight due to us being unable to make it home for one reason or another.

Mine is the same way. Very very secure, but there is always that "what if" in the back of my mind so I make sure to close it at night. If I've had a hard week and want to sleep in "late" (like, 7 am) on Saturday, or if we go out of town, I leave the coop doors open. Otherwise I close them up tight and latch them with carabiners. One coop has a horizontal sliding door, but the other I made with swinging open doors, and it would be nice to come up with something that was secure at night and also would fully swing it open so the wind wouldn't catch it. I'm sure an electronic latch, or magnets that operate on a timer, could somehow be integrated into the setup.

B
Issues With Automatic Coop Door in Winter