Can anybody point me towards some info about the genetics of blue wheaten?

It looks like I'm about to acquire a trio of blue wheaten bantam araucanas (rumpless/tufted). Unfortunately, I don't particularly care for that color in the roo -- but it ought to be a good trio to breed from if I decide to breed, since the roo is double tufted while I *think* the hens are clean faced (I haven't met them yet!). (
edited to add -- I am told that this roo has done a fair amount of winning at shows, so I'm not saying that the tufts would be the only reason to breed him!)

Anyway -- what can I "do" with blue wheaten? What combos will get me other interesting colors? Any input welcomed!
Last edited: Sep 30, 2008

The blue on those will follow the same pattern as "black/blue/splash" on the solid colored blues. Except in your case the "blacks" would be normal wheaten(normal wheaten/blue wheaten/splash wheaten).

If you don't like the blue on the wheatens, just breed lots of chicks and keep the ones lacking the blue gene and you're set for wheatens.

To get other colors out of those(assuming they are pure for wheaten) it would be necessary to cross to other colors.

Quote:
Thanks for the info. I love splash, so I wouldn't mind getting some of those at all.

I did assume that I'd have to add other colors. What crosses would yield interesting results? I want to know what birds would be best to add to this trio, if I end up adding any.

Thanks again for your input!

Not sure about what you mean by having to add other colors? If that's by adding new blood.. all you need is good wheatens as wheaten x blue wheaten will produce both wheatens and blue wheatens.

If it's by wanting more variety in colors and patterns.. it's a matter of personal taste. When I had them, I added cuckoo to make blue cuckoo and was on way towards making creles.. absolutely love the creles myself.

If the colors are mixed, it can take a good while to get them breeding pure again, just in case that is a concern. Other than that.. just go for whatever color strikes your fancy. If you add solid blacks, you'll be able to eventually make solid blues by crossing them with your blue wheatens.. the crosses will tend to be blue bodied with either white or buff "lacing" on the necks.

If you have a specific color/pattern you like, just ask.. couple of really good genetics folks here (tadkerson is the Best)

Quote:
This is the sort of thing I meant.

You see -- I know a fair bit about color genetics in dogs, but very very little about color genetics in chickens. I'm thinking about color crosses that will provide an interesting variety in the progeny. For instance, if I had a fawn doberman (bbdd) and I wanted to produce a "rainbow" litter (black, blue, red, fawn), I wouldn't mate it with a homozygous black doberman (BBDD). All the offspring would be black. Instead, I'd want to mate it with a heterozygous black dog (BbDd).

As I understand it, blue in chickens is from a heterozygous trait. Blue x blue should produce 25% black, 25% splash, 50% blue. So far, so good -- especially since I like splash. But what else would make a "productive" combination -- something that would produce the equivalent of a rainbow litter, or at least not produce something boring like all black chicks? The cuckoo is a good idea, for instance. I like the thought of blue cuckoo -- splash cuckoo? -- and maybe crele. Would blue wheaten x cuckoo automatically produce blue crele? Is wheaten dominant or recessive to non-wheaten? How does the wheaten trait relate to BBR? And so on!

What other ideas do ya got? Thanks again for any input!

Aha! The Dobe example helped. Unfortunately dog genetics seems to be far simpler.. for example a solid buff chicken is actually the accumulation of several genes into the same bird. For example// buff reads out something like CoCoeWheWhII at the very least plus various additional genes to keep the buff solid and "clean". So there's not a "buff" gene like a red gene in Dobes. And there's the tricky part where a seemingly same color can be caused by different genes- there's more than one way to make a black chicken and also more than one way to make a solid white chicken.

So that is a problem in freely crossing the colors in chickens.. many of the patterns and even deceptively simple-looking solid colors are actually quite complex genetically which tends not to lend well to the neat segregation as in the Dobe litter example.. the closest thing I can think actually is blue in chickens(BTW you are correct in blue being a heterozygous trait. Blue modifies the black pigment, leaving the browns and reds mostly unaffected).. however the patterns can and will be intermediate.

The other option is simply to let them freely inter-mate and just be surprised by the babies. Easter Egger is a good example, as it's not an actual breed so it has so standard so literally "anything goes" but at same time one can set a breeding goal- ain't nobody can tell them they're doing it wrong or what not..

cuckoo rooster x blue wheaten hen= half cuckoo half blue cuckoos, however expect off color on the hackles and on the saddles and wing patches of roosters at maturity.

Blue wheaten rooster x cuckoo hen= all male offspring cuckoo, in black or blue versions and all female offspring will be non-cuckoo in either blue or black. Also expect off color on necks and saddles.

The reason for this is barring is a sex linked gene. Barred and cuckoo is the same gene, the difference in appearence is basically due to feather growth rate. Slower growth, sharper and crisper bars, fast growth tend to have chevron barring.

To get crele-like birds just breed a cross bird from above to a wheaten bird and you will get some creles along cuckoos, solids, normal wheatens- plus in blue versions if you use a blue bird.

Crele is supposed to be for barring on e+ birds(black breasted red), however cuckoo wheaten will look quite 'crele' however the hens will look quite different from crele hens.

Wheaten is part of an allele series.. there are at least 5 known alleles for the same locus(E, ER, eWh, e+, eb.. hope I got that right..).. wheaten is dominant over black breasted red but not black or birchen.

You may be interested in visiting the genetics forum at the Coop- there are lots of *quite* knowledgeable breeders and so is a very good place for more serious reading/questions on how to breed for this or that..

Thanks for the great info. It looks like I've got some reading to do! And your explanation also helps me to understand why chicken people are so invested in separating chicken colors, treating them as nearly different breeds from other colors. With so many genes and modifiers involved, there's more at stake than when mating two colors of dogs!

It now also appears that I may be getting more than the single trio that I had expected. It'll be interesting to see what I end up with!

I ended up getting seven birds total. One blue wheaten rooster who looks more like wheaten to me, but he has evidently done a good bit of winning at shows and who am I to argue? One buff rooster with absolutely gorgeous color (to me), but clean faced. Two blue wheaten hens that look darker than all the blue wheaten pics I've seen, but again what do I know. And three buff hens, one with gorgeous color (again, to me) and the others pretty but not exactly buff. Various degrees of tufting on the hens. One of the blue wheaten hens has a small partial tail, all the others are completely rumpless.

Although my rooster is an Ameraucana instead of an Araucana, the blue wheaten color should look like this. 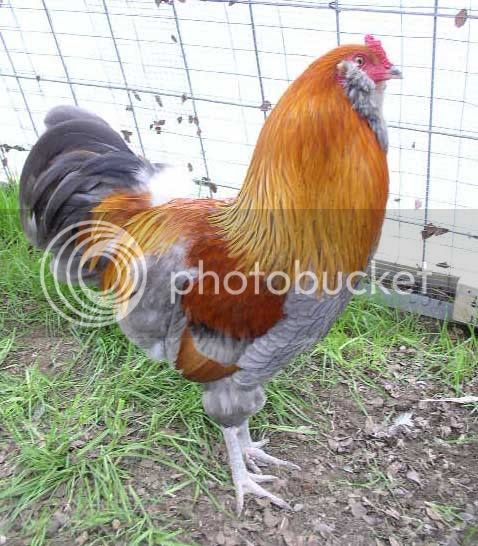 J
Ameraucana Roo x EE hens - what do you call them?