Feenix said:
Thanks for the input and color corrections guys! I don't know much about colors and the lady I bought them from told me "she" was a lavender. I had no intentions of breeding them, I just liked the lighter color. Is he a splash and not a lavender splash because of the red feathers mixed in or just too many dark feathers? Or is there no such thing as a lavender splash?
I brought them in the house last night as an experiment to see if he'd crow and sure enough he did. I live in town so might have to look into something to deter the crowing or keep him as a house rooster.
Click to expand...

Lavender is a recessive gene (that means it needs two copies to show up) that lightens gold and black (and therefore blue/splash). It’s uncommon for a chicken to have both splash and lavender, since people usually don’t mix blues and splashes with lavenders, because it makes it hard to tell apart the colors. Also, the standard lavender color (two recessive lavender genes on a black chicken, turning them to lavender) is the only one that can be shown or is even a recognized variety.
Oh, and you’re right about it being partly because of the red feathers. A chicken with lavender can’t have red feathers- they’re lightened to a straw/yellow color. Like in this isabel Orpington: 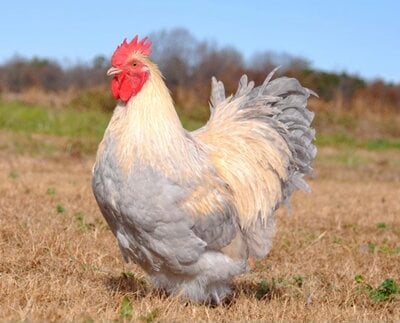 You have a pair