Barney back out with his girls! Fence problem solved ( we hope)

I have my adorable little frizzled silkie/cochin mix Barney Fife. Here is a picture of him yesterday: 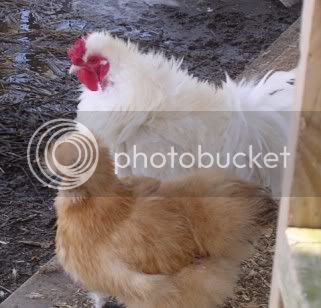 Tonight I came home from work, and went to tuck everyone in for the night. I opened the bantams door, and I didn't see Barney. He's so white, and is usually on the front roost, all fluffed out and noticable.
I got completely panicked- Where could he be? I stepped into the coop, and I saw him. On the back roost, in the corner ( a spot I have never seen him in- he's usually surrounded by the girls. I could barely tell it was him- his feathers were all flattened down- and brownish red. He was opening and closing his beak. I ran in and got a towel, and wrapped him and brought him inside- his comb was gushing blood.
He's got a very bumpy comb- I couldn't even tell where the blood was coming from, but he was covered!
It took me a good half hour to get the bleeding to slow down. It was caked and coagulated all over his beak. I still can't tell where the bleeding was coming from. I also cant seem to find his nares. I tried wiping all the blood off, but his comb is all over the place. The blood is coming from several different areas, I think. He is still bleeding a little - but it is down to a dribble here and there as opposed to gushing. He has more flour on his comb than a 6 layer cake.
He got a little bit of a bubble bath. I found he was also covered in mud - his back half is dark brown. I have no idea what happened to the little guy.
He is napping in a cat crate next to the heater right now. I don't have a hair dryer. 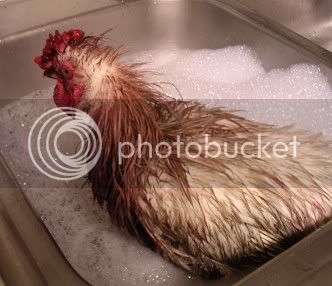 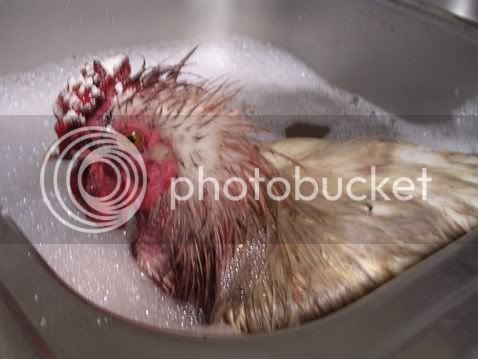 Any idea what I can use to get him white again? I tried dawn dish soap. I emptied the sink 4 times, the water was so cruddy. 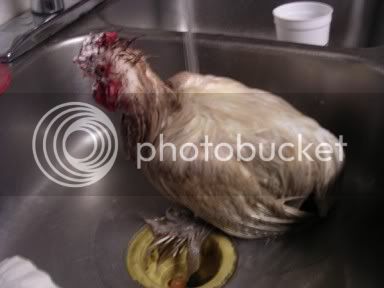 More importantly, is there anything I can use to really scrub the blood off his comb/beak? I honestly cant see his nares, and am afraid that he will have troubles breathing. I can hear his breathing.. it's hard to explain, but it sounds like his nares are blocked.Is there anything to watch out for? I suspect he may have inhaled a bit of blood. I tried cleaning with a qtip, but the dried blood isn't coming off, and his comb is flopping over the sides of his beak. There has to be something I can use that will clean it/stop the bleeding, and allow me a better idea of what is going on.
Last edited: Mar 7, 2010

I know vets use peroxide to get blood out! But that would have been first, then I would have tried soap! but it wouldn't hurt to still try!! also cornstartch is recommended when owners cut dogs quik too shot to stop bleeding fast- If the flour isn't working. hope this helps!

The bleeding slowed tremendously. I used a q-tip to clean off the comb, and it seems to be split in several places, and looks like chopped meat in one spot. He's having a little trouble breathing. I still am unable to find his nares- I cleaned off the dried blood as much as I could, but it seems like the comb might now be covering his nares. I know- it sounds stupid that I can not find them, but I can't- and it concerns me. I can't poke around too much- the bleeding starts up again. This time I used cornstarch ( I don't know why I didnt think of this before). It is helping stop the bleeding. But he is still squeaking for air....

I know the stress and panic you're feeling. It's so heart wrenching to find one of your flock in such obvious distress. Your little guy probably got in the way of someone's quick beak, then when it began to bleed, it attracted more attention due to the smell of all the rich blood. He was probably overwhelmed.

This happened this week to one of my SLW pullets. By the time I discovered the poor little victim, her head and shoulders were drenched in blood, and her comb was more than half torn from her head.

When this happens, you have to get the victim out of the population or run the risk of cannibalism. Then you need to keep them isolated until the wounds are healed and there's no more danger of bleeding.

My emergency involved cleaning her up and then next morning, performing a partial dubbing to remove the excess comb that appeared to be attracting attacks. https://www.backyardchickens.com/forum/viewtopic.php?id=299095 This was the second time this happened to her. The surgery went well, but the bleeding just wouldn't stop. Finally I dumped corn starch on it, and it stopped for good. Two days later she was back with the crew, and she's not had any problems so far.

When I was shopping yesterday, following some advice I got from this forum, I stopped in the pharmacy department and picked up a few styptic pencils to keep in my chicken medical kit. You may want to do the same.

When your roo's feathers dry, he should look like his old handsome self again. But wait until tomorrow before you try to clean the flour or corn starch from his comb. Hydrogen peroxide is good for that.

And you should feel better by tomorrow also.

Do you have another rooster? Sounds like rooster vs. rooster. I panicked when mine was bleeding from various places from the head.
I thought he was bleeding out of his mouth! I panicked! Gave him a bath, easy around the eyes, nose, mouth, I then blow dryed him.
Let him be for a couple of hours inside so he could catch his breath and dry completely. He was fine after that.

I do have another rooster- they are seperated by a fence, but I do know that isn't an effective barrier. I did think that he possibly challenged the big rooster ( as I have seen him do, even though he is a quarter the size of the other one), and a fight may have taken place with the fence betwen them. Thay could certainly explain all the tears. It may also explain all the mud he was covered in.
He is in the house, in a crate, basking by the heater to keep warm.

Geez poor little guy! They alway think they are bigger than they are. I always think of my little Bantam Cheepers challenging Nugget and then running under him lol. I hope he'll be ok!

Husband just came home, and informed me that the 2 roosters were challenging each other. So, at least that explains what happened. Silly Barney Fife challenging a rooster 3 times his size.
He darn near has a cornstarch hat right now. Still squeaky breathing. I'm keeping fingers crossed

Sorry, but the corn starch hat comment almost had me on the floor.

I hope Barney Fife pulls through. I'm sure he will, sometimes they are so hard headed thinking they can take um' on.

I've got one doing the same thing right now and he keeps getting pounded! I protect him because he's my favorite and trying to sell the one he's fighting with. They are separated. "Favorite" is free ranging, while the one I want to sell is in the pen.

E
Skinny chick, how should I help him?