We recently hatched several marans-- black copper and blue birchen-- from a local breeder. These eggs were to make up for a birchen marans laying hen we bought that turned out to be an internal layer. I had some issues with my incubator that resulted in several eggs from this batch, marans and otherwise, to quit early.

Those that remain are now hatching very staggered, but they are, indeed, hatching. All the chicks seem fine except the marans-- so far, both of the marans have a deformed/tiny outside toe. They've been moving fine and appear to be walking without issue, and we aren't planning to breed these, but still-- does anyone know what's going on, here? I've read some information about fused toe issues in marans, and given that the marans pullet we got from the same breeder had an issue, it seems like perhaps his breeding stock just isn't as good as we'd hoped. Thoughts? 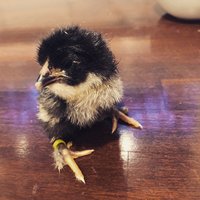 One chicken short of crazy

It's kind of hard to see in your photo but our Marans rooster had a weird outer toe also. It was part of the reason we culled him. I'll be interested to see what others say. Best wishes with the rest of your hatch and your chicks.

Could be hereditary, since another bird from same place has toe issues.
Ask here:
https://www.backyardchickens.com/th...er-marans-thread-breeding-to-the-sop.1122465/

aart said:
Could be hereditary, since another bird from same place has toe issues.
Ask here:
https://www.backyardchickens.com/th...er-marans-thread-breeding-to-the-sop.1122465/
Click to expand...

I’m not seeing anything toe related there. Do you know what page it’s on?

JacksonPearce said:
I’m not seeing anything toe related there. Do you know what page it’s on?
Click to expand...

You'll have to ask, paste same info as you started this thread with.
There are several good breeders on that thread, they will answer within a day.

Thanks! I’ve asked there.

Maybe post back here with the answer/explanations you get.

kfelton0002 said:
The small outer toe is referred to as a rudimentary outer toe and is not judged against in show so the judges wouldn't hold it against you if you decide to show the birds. It is something that should be culled away from if you have that luxury but isnt a huge deal and is common in Marans because of the feathering on the outer toe. It doesn't mean they were poorly bred or are poor quality, its just another trait we see in Marans that needs to be worked on. No big deal unless it is fused to the middle toe or is completely webbed. Congrats on your babies that are hatching!

Here's what they said!

So it is genetic?

K
Poor Hatch Rate on One Breed only? - Splash Marans

How long did it take you to 'get' hatching with an incubator?