Hi, around where i live we have a lot of predators, and many of them come in our backyard, especially bears and hawks. what would be the best way to keep them from eating my chickens? thank you!

Electric fencing and strong, sturdy coops are the only ways to deter bears. We have bears too but they don't seem to be as much of a problem as hawks and raccoons.

Raccoons generally come out at dusk and night so you won't have to worry as much about them if you free-range. With raccoons, you may have to worry more about the coop design.
Make sure you have secure locks on your coop door. Raccoons have nimble fingers and are able to pick open simple locks. Either of the two "YES" locks in this pic are great as they require 'multitasking' or are 'two step' locks. I use both types. On the nest boxes I use the lock on the far left ('NO') but I have a second lock as well, a simple wooden block that you turn to open the box.

Using 1/2'' hardware cloth is important too. Chicken wire is just not as strong, and coons can reach through it and grab chickens, not to mention the rats etc that could get in and eat the feed. HWC is more expensive though, so it's your call.

To predator proof your coop against hawks, simply put a solid roof or HWC on top of the run so they can't swoop down and get them. While free ranging, hawks can be an issue though. Your best bet is keeping alert chickens, and having lots of vegetation for the chickens to hide and get away.

Another thing that will deter digging predators such as foxes and coyotes, is to put a HWC 'skirt' around the perimeter of the run, extending about 1' out. We cover ours with dirt, but that's not necessary.

I watch my chickens while they free range and have a secure coop and run. We have never had any predator issues yet, owned hens for >6 years.
Last edited: Oct 25, 2018

The bears can really only be deterred by hot wires. You can protect against hawks by keeping your flock enclosed in a covered run.
I have both of these predators as well. My flock has both a completely enclosed run with hot wires around it and about a 1/4 acre pen enclosed in poultry netting. There are places they can get under shelter in the pen to avoid aerial threats. No losses so far.

Yeah I wouldn't worry too much about the bears. They typically don't go for chickens I think.
We never worry about the chickens, only our bird feeders! lol!

There are pictures of bears tearing coops apart, so don't ever assume that they only want birdseed!
Mary

puffypoo22 said:
Yeah I wouldn't worry too much about the bears. They typically don't go for chickens I think.
We never worry about the chickens, only our bird feeders! lol!
Click to expand...

We lost our entire flock last year to 3 bears. You bet they love a fresh chicken dinner. 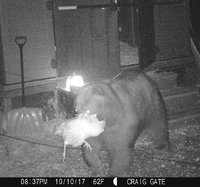 WHOAA!!
Is that at your place?

Wow!! Caught red handed! The bears around here dont bother with the chickens thankfully but if they get hungry enough that could change

That's what I meant, just from my experience the bears don't bother with our chickens.
@Peppercorngal that looks awful! I hope yall are safe

We only have black bears around here, grateful for that.

How Long for a Hawk to Lose Interest?