I've had Betta fish before, in jars, aquariums, other fish communities. I've found they best get along with plecos, swordtails, mollies and some even will get along well with guppies.

Never before have I had one like snails. I have the Betta in a small aquarium...maybe a 1 gallon? I put a snail in there and he's been infatuated ever since.

Is that normal for a Betta to sit next to a snail...all day? The fish will find the algae flakes and sit and watch the snail eat the algae. Just does not seem normal to me...

Here's a picture of the snail, I'll try and get one of the two together. They've been together now about 3 months. The snail is a bluish color and is bigger than the Betta. (The reason for me choosing the Betta is because he was smaller than a gold dollar! 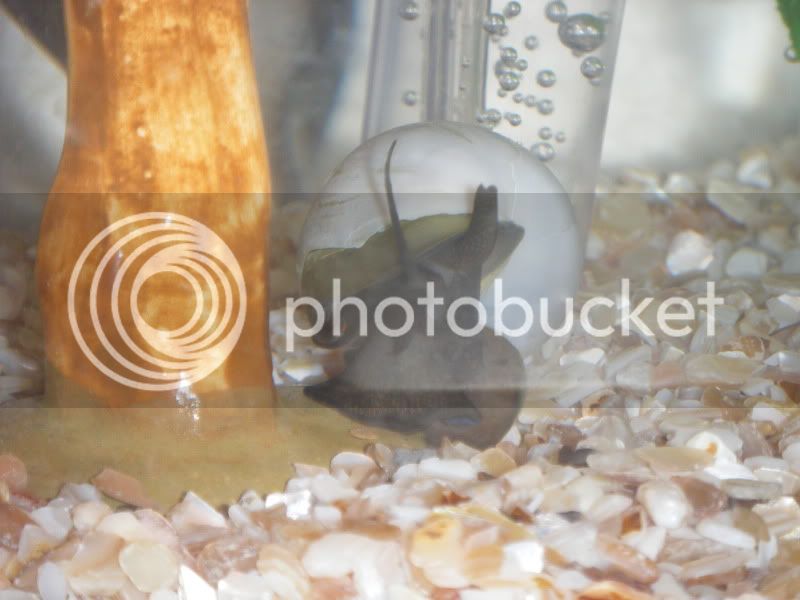 If anyone can give me info on the snail, it's appreciated! Especially if it's giving off "love" pheromones. Any idea what that tube is that's coming out of it's front? Looks like a snorkel when it's fully extended.

Not sure what that tube is exactly but there are anatomy pics here http://applesnail.net/

Bettas can be weird. I had some males that got along fine with other fish and some that were just too nasty. Now i have 4 males and 5 females. The females are all together with a small silver dollar, small chinese algae eater, a glo light tetra and a head and tail light tetra. 2 of my males each have their own bowl, and the other 2 each have their own plastic shoe box.
Last edited: Oct 3, 2010

Oh cool! It IS a snorkel!

I wonder why it had it extended while it was at the bottom of the tank?

What you have is an apple snail! The tube it extends is it's breathing tube. They are really neat snails, and can only breed with a partner, unlike other snails who can reproduce by themselves. They do get large though, sometimes even bigger than a golf ball!

It's likely that your betta is still a baby and that's why he's so small. Most of my bettas loved to hang out with the snails and my friend's would actually eat the snails. Just be careful that yours doesn't get aggressive, because they can do damage to the soft parts of the snail. I've also had snails become "depressed" because the betta would never let them come out of the shell.

They'll also eat the same wafer. It's just kind of creepy. I actually bought wafers because I felt bad about cleaning the tank and not leaving any food for the $0.75 snail.


The Betta has gotten to be as big as he's gonna get, I'm fairly certain. It's probably been 6+ months since I first got him. He's close to the same size as the snail, if not smaller.
Last edited: Oct 3, 2010

Here's to show the Betta: 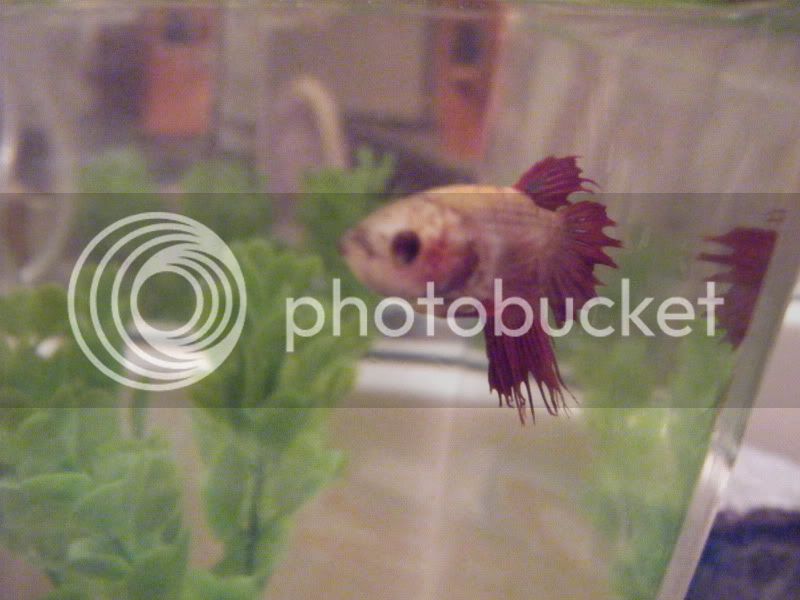 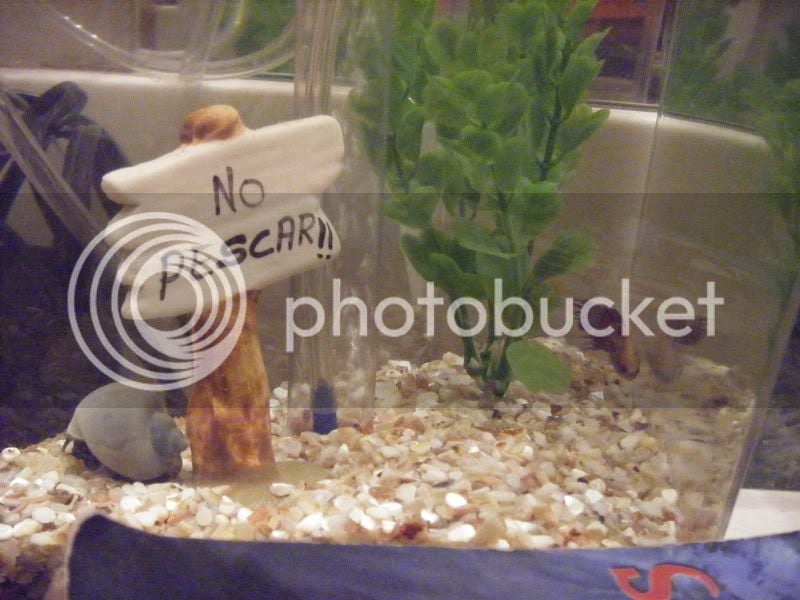 I think the reason your betta is on the small side is because its a female. Any males I've ever seen are decently sized and have big fanning tails and fins...Also the head color is very light, even in the short tailed bettas the males tend to have dark bold colored heads... If you got from a pet store it may be a short tailed male but again the color of the head makes me believe its female...That and you seldom see short taileds in the petstores anymore as the veil tailed (most common), Double tail, Crown Tails, and Halfmoons have taken over as much more flashy and colorful with their long flowy extravagent tails.

Anyway it is quite cute, I am a sucker for bettas they are just too gorgeous. I have one live to be 6 years old before it unexpectedly got frozen when we were out of town and the power went out!

The snail is quite cool, I have been thinking of trying to add a snail or two into my two bettas tanks.

The caudal fin length makes me think male. In that first pic you should see the ovipositor (white dot on belly) if it was female. Males usually don't get the long tail fines until they are at least 1 yr old. The bettas in pet stores that have the long fins are 1 or older and usually aren't good breeders because they are older. A few yrs ago this local person bred bettas and sold some youngins to the store i work at and they were really tiny. In fact the females we always get in from the wholesalers are still tiny. My 5 were itty bitty when i bought them but now their body size is pretty much as big as a males just the fins are still short.
Last edited: Oct 4, 2010

Quote:
What is the tank temperature?
Betta's need to be on the warm side,75 - 80 degrees and prefer protein. If your wafers are formulated for a Pleco or snail they most likely don't have enough protein for a betta. Skeeters are good in the spring and summer or you can cut a small earth worm into bite-size pieces for your betta.

The snail gets the wafers and the Betta gets Betta fortified pellets/flakes.