I have a 6-7 year old "only" chicken who went off food (Nutrena feather fixer) a couple weeks ago. Was still eating regular treats of dried meal worms and a few sunflower seeds. Also. an occasional pea or a couple wax beans I'd give her from the garden.

Three days ago, noticed she did not come down from her roost until about 7:00 am when I went out there. This is unusual. She also didn't seem to go for her meal worm treats. When I offered her some sunflower seeds in my hand, I noticed she seemed to not be able to see them. She would peck a couple inches short of the seeds or off to one side. Her eyes look normal. They are equal and react to light.

Since she seemed to be having trouble seeing, I thought maybe, having been off her food, she was not getting proper vitamins. For the last three days, I have given her about 5 drops of Poly-Vi-Sol baby vitamins (WITHOUT IRON), administered directly to mouth. She will drink a little watered down feather fixer pellets (crushed), but I haven't really seen her drink from her bowl of water. She will also eat fresh wax beans from the garden, cherry tomatoes and a little scrambled egg, all of which I have to hold and wait for her to "find them." However, she is not eating nearly enough.

Her poops have been pretty normal up until the last three days when she has had trouble eating by herself. They have been looser but still green with the occasional cecal poop. However, today, she had a large bloody looking poop that had roundish strands of what looked like intestinal material. I looked at them through a magnifier and didn't see anything that looked like a tape worm or round worm. They are maybe 4 mm wide and between 6 and 8 inches long. I have treated her for round worms in the past when I've seen them in her poop. Late May of this year, she was having runny poops, so since she wasn't laying, I treated her with Safe-Guard followed by Equimax Horse paste with plaziquantel and ivermectin to cover tape worms, just in case. By the way, I've had her since fall of 2015 (adopted), and this is the first spring she hasn't laid, though last year she only laid a couple months in the spring. I figure she is just old and decided she had enough.

Here are a couple pics. This were picked up off the sand in her run, hence the granular material. 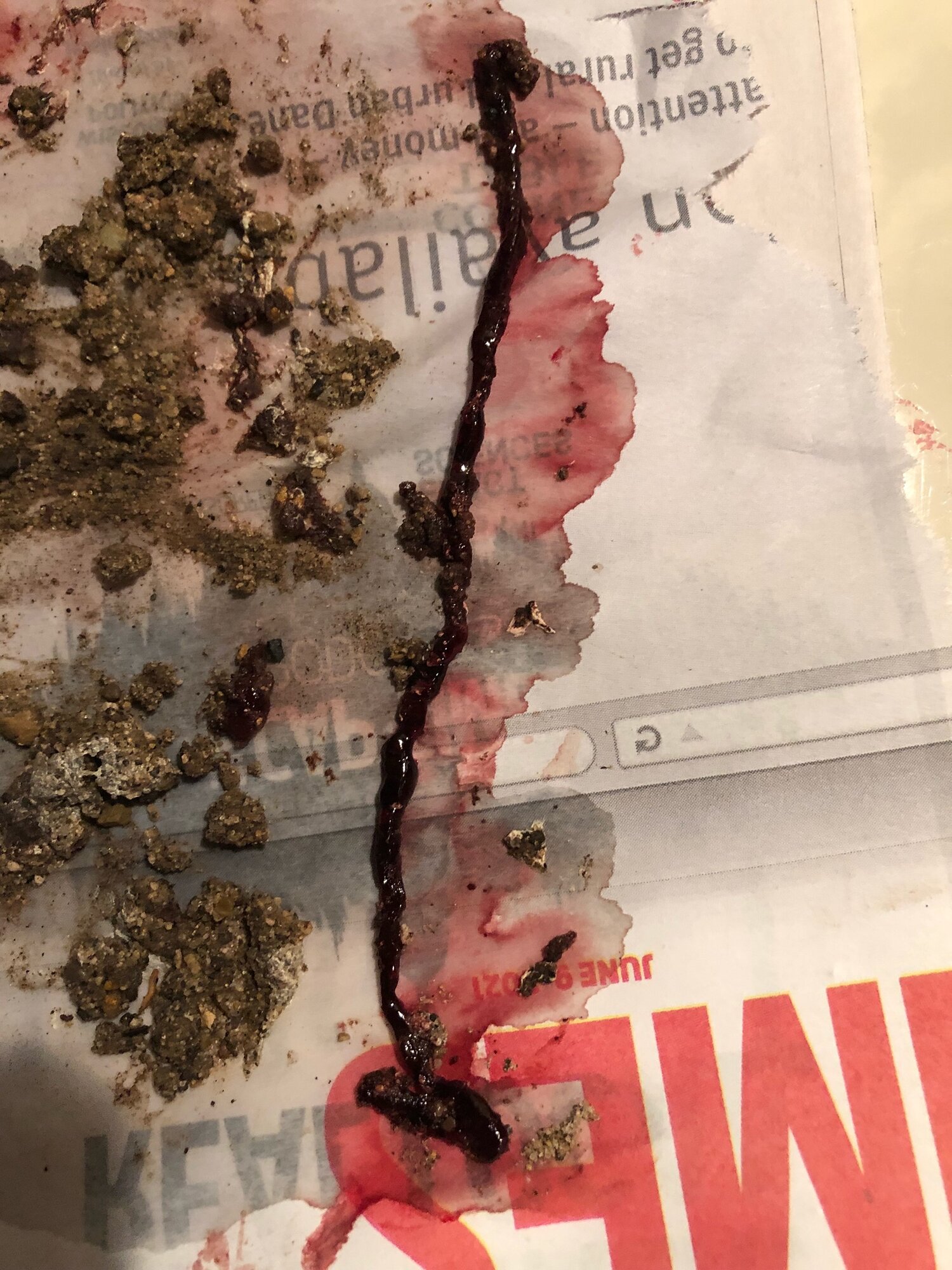 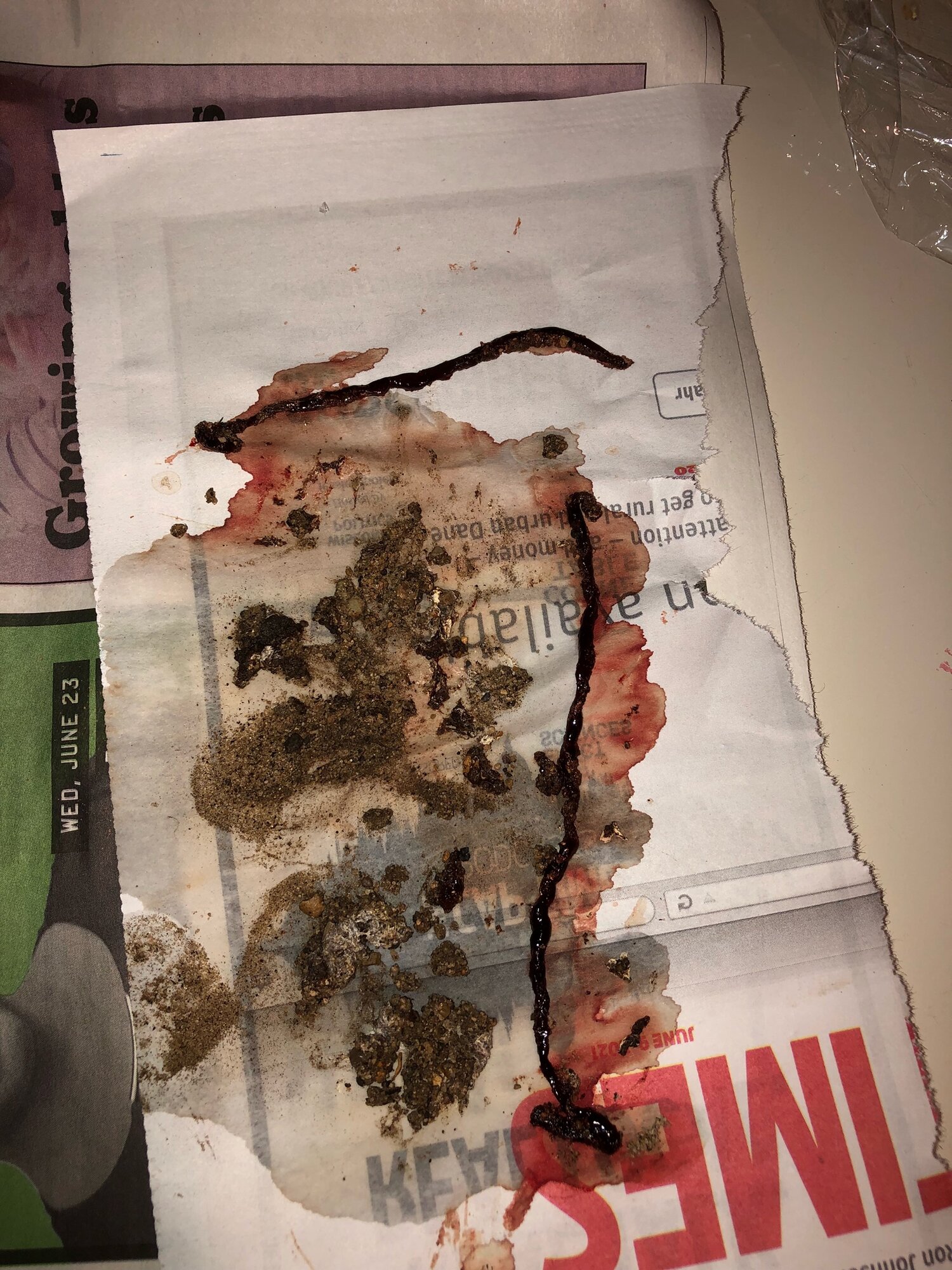 I would take a bold guess and say she has a very serious case of necrotic enteritis. It could be caused by bacteria or coccidia or both. Ask your vet to run a fecal float for coccidia. A gram stain for bacteria would be wise if you are willing to spend the extra money. It might need to be sent to a lab for that one.

You might ask your vet if they think a sulfa antibiotic is in order.

Vet said there was no coccidia or bacteria in the stool sample. All the red stringy stuff was coagulated blood. The only thing she saw in the stool sample was what looked like yeast hyphae, so perhaps she has a little yeast growth in her gut. She did an exam and felt an enlarged liver and saw a couple reddish marks (not bleeding) on the fleshy part of the vent. There was no sign of yeast in the mouth/throat. She could only speculate that the enlarged liver may be due to a malignancy. She is just guessing that something is causing her to bleed into her gut. She had no idea why the chicken's eyesight for near things seems to be off. She said her eyes looked fine. She did seem a little dehydrated.

She recommended an anti-yeast cream, same stuff they sell over-the-counter for vaginal yeast infections in women. Since she is dehydrated, I started her on 1% clotrimazole cream, a dime-size blob mixed in with 40 ml of warmish water, with some dissolved baby bird food and Poly-Vi-Sol vitamins, tubed in once a day for 5 days.

She is on day 4 out of 5 of the tubing in clotrimazole/water mix. She will only eat cooked whole-wheat spaghetti and cherry tomatoes. She doesn't want meal worms, Feather Fixer, water in a bowl, scrambled eggs (even dyed them red with food color!), or cheddar cheese. She did eat 1 pea-sized piece of a cooked hot dog. Frankly, I was just curious if she would eat it. I don't intend to start her on a hot dog diet. I made some cooked chicken today for chicken salad (for me!). I tried to give her a smidge of chicken, and she took it in her mouth and spit it out. Maybe she recognized it as one of her own kind.

Not sure how long she'll make it with tubed in water and baby bird food if she doesn't start eating and drinking on her own. I was joking with my husband that I need to figure out how to grind up Feather Fixer and make it into spaghetti! Any other food suggestions to try would be welcomed.

Stringy poop in 6 day old chick - is it worms??