One of my four week old Swedish Blue ducklings is getting some white wing feathers, but they're bloody. I haven't seen any of the other ducklings pecking at them except when they were very first starting to peek out, but is that what's happening? Do I need to separate that duckling so that it can heal?

Wow--this was really hard to get a picture. But while I was crouched down in their enclosure trying to get the right duck to turn the right way, I did see several different other ducks attacking that wing end, one after the other. And there's a lot of aggression going on. I think it's past time to move them to much bigger quarters. 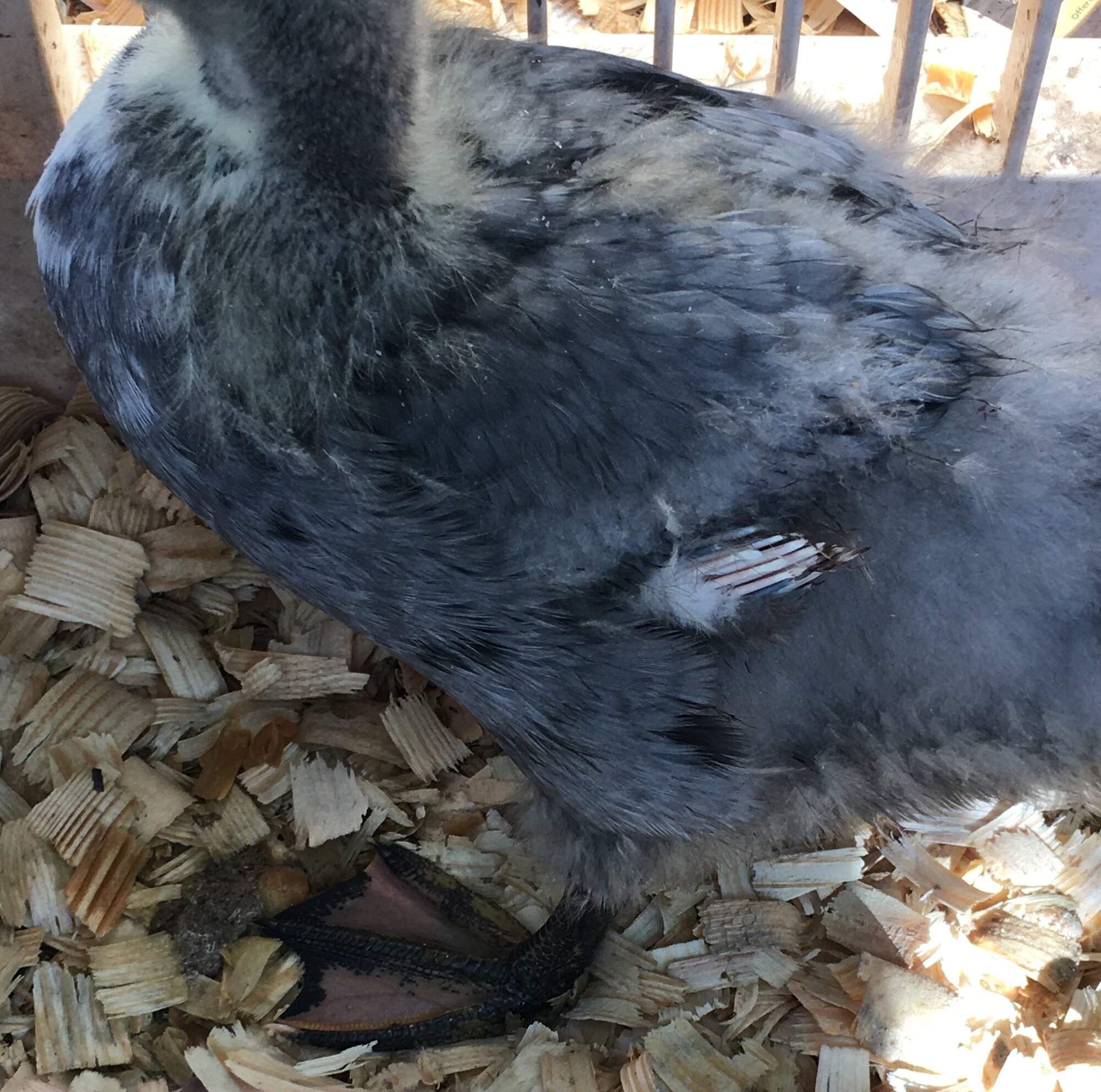 I don't see any blood on the outside of the feathers, but I can see some on the inside, which is to be expected.

Isaac 0 said:
I don't see any blood on the outside of the feathers, but I can see some on the inside, which is to be expected.
Click to expand...

They were dripping blood yesterday. Is that because they're broken off at the ends?

And at least several of the other ducks ARE pecking at it.... (ie, what should/could I do about it?)

Move them to large quarters and give them outside time so they get rid of some of their energy. It’s like I have nothing better to do and those feather growing in look interesting let’s nibble on them.

Miss Lydia said:
Move them to large quarters and give them outside time so they get rid of some of their energy. It’s like I have nothing better to do and those feather growing in look interesting let’s nibble on them.
Click to expand...

That's what I'm thinking. We just need to figure out WHERE, and fast!

You don’t have a house an pen for them?

Miss Lydia said:
You don’t have a house an pen for them?
Click to expand...

It was perhaps very silly to get the ducks before we had the duck house built, but we did. We've been keeping them in an ever-expanding enclosure on the front porch (with a wet area and a dry area) that technically (according to the "how much space does a duck need" at various ages) should have been big enough, but it's obviously not.

But the get-the-farmhouse ready for the tenant projects (three solid weeks of building/rebuilding) are finally done, so the duck house is next.

But there is a big room in our shop building (dirt floor) that we're going to put them in in the interim. I'm blocking off a third of it (about 15 X 15 feet for the 10 ducklings), and we'll put fencing up for a large outdoor yard where the play water will be (we'll have drinking water inside). The only daytime predator issues we seem to have is hawks, and the yard will be well hidden under a couple of really huge willow trees, with the side of the shop building on one side, which will hopefully discourage hawk activity, and we'll put them inside at night. We also have a LGD, who came with the farm, who does a good job keeping everything else away. The room is very well insulated and cool (unlike, uh, the outdoors right now), and there is no predator access (concrete foundation walls, metal siding, high windows, which I'll probably put wire over even though I can't imagine a raccoon climbing up the smooth metal side of the building. So this hopefully will work for the next couple weeks until the real duck house and run is built.

The plan is for them to do some targeted free-ranging once they're full size.

Duckling biting other duckling, to the point of bleeding. Help?

HELP, do my ducklings have angel wing?