I received 10 chicks described as 8 ea. blue orps, 1 ea. black orp, and 1 ea. blue rock. I am unfamiliar as to how to recognize them by color. I would appreciate any and all input from those of you schooled on blue and black orps. 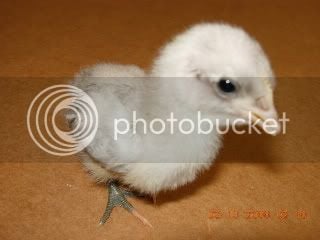 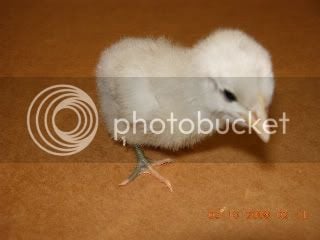 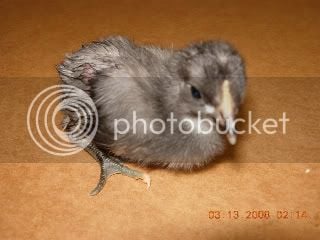 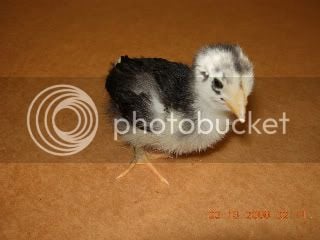 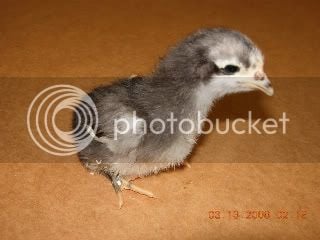 You will have to hard time finding out which is Blue Rock and Blue Orps at this point. Looks like all of them are Blue Orps due to the pink pigment showing thru except for that black one which I can not see any pigment on his feet or legs.

My Blue Rock girl I had lost, she showed every bit of a Blue Orp....she was a throwback from a Blue Orp background. She had dark legs and a HUGE body to deal with. Heres a pic of her:

Wow, EweSheep, what a gorgeous bird. I can only dream of ever having something comperable to her. Thanks so much for your input. These are the chicks from Gordie and more coming next week.

And my professional opinion is....

J/K! Well, not entirely. I think maybe the last one is a Rock, but honestly, I think it's a little early to tell, Roger. All I can say is that I think #4 is black, LOL.

Yogi, does #2 have greenish legs?

They are very cute little chicks!

Priss, I don't think so. They first two look the same in leg color and I honestly dont see anything off about them.

Yogi, if you can get a hold of Gordie, have him put some markers on their forehead to indicate which are Blue Rocks OR Blue Orps.

I had some Black Rocks and they were beautiful! Too bad all of them were roosters! I had kept this pullet and another pullet, which I sold later and she was almost eight months old when the pic was taken. Man, she was ONE BIG pullet! And a big pantloons to show for it too!

I dont know how I would compare with Rocks and Orps but I think the Rocks are more streamlined in their heads and not as "round" as the Orps are. And one thing you can tell are the color of the eyes that will definately stand out. As you can see my Blue Rock, she has greenish brown eyes while the rest of the Orps are med to dark brown. That will definately give you a dead giveaway for a Rock chick. Not all of them will show tho but most of them do!

EweSheep,
Thanks for the info. I have a really steep learning curve regarding the blue anything. lol I looked at their eyes and I think I might possibly see what you advised in No: 2. Additionaly, it's wings are considerably smaller than all the other 9 chicks. They are all supposed to be the same age and from the same hatch. Time will tell.

No, I went back and double checked. No greenish legs on it or any of the others.

What Color will these Silkie /Orpington chicks be?