I just wanted to see if there were many other Boxer owners out there with chicks. I don't know what to expect from my boxers. So far so good but I am afraid of the day it will be time to put the chicks out in their coop or when we will let them walk around freely.

So I just wanted other peoples stories...

I know there is at least one person who has boxers and chicks. However, as with all animals, training and a close eye would probably be the best, due to the huge variations in personalities. Best of luck!

my two older females I would NOT trust around the chicks/ducks or anything else. My male has killed cats but is afraid of baby chicks - but I still dont let him to close to them and the youngest of the bunch goes near the chickens run but really does not pay them to much attention - but out of the 4 she is the only one being raised with chickens and ducks the other 3 were already adults by the time the flock got here.

the dogs are still hanging out in the house but as soon as I get the brooder full of fuzzy butts they will have to go outside more often.

as far as when the chickens go outside - i have the two yards on opposites sides of the house - the dogs cant see my birds but can hear the noise from the yard. when the dogs have gone out to the front where the run is none payed to much attention to them.


good luck with your dogs and chicks

Our female is 5.5 years old. I know that I can trust her. We have had her since we was 6 weeks old. It is my male (2 years old) that thinks everything is a "chew/play" toy. He doesn't mean harm I really think but he is a big goof and doesn't realize he can't play with little creatures. So far he has gotten a squirrel that was messed with him everyday. A cat that was really old, and a gopher! The birds I can't blame him I think it was our cat.

With that said ofcourse we will be watching them with both the eyes in the front and back of our heads.
Last edited: Mar 23, 2008

I think with my crew - they will not harm them by wanting to - I think they will play with them to death!
when they were outside in the front near the chicken yard my male could have jumped the fence very easy and we would have had a mess ! but he chased and killed a sick cat instead - I have had them all on a leash one at a time near the run - and Daisy the head dog has a high prey drive - she will chase anything that moves - hunts mice also, Abbey kinda chases them alittle, Wally does not really seem to care much about them and Gypsy the pup really dont pay much attetion. So I dont think I would trust mine fully with them.

have you showed your dogs baby chicks to see what they think of them? your male sounds like he would play with them to rough and end up killing them - those big goof balls just dont know how strong they are sometimes LOL

We have let Shyla sniff a chick and that was all she did.

Tank has looked in the bin and stared at them and didn't do anything, But I wouldn't trust him with them if they were running around the yard by no means.

I hope that they accept the chicks as pets one day and we can live in perfect harmony... ok waking up now.... LOL

I have a boxer, and had chickens at the same time. He was fine with them as long as we were watching. Unfortunately, I made the mistake of going to get the mail, and as I turned around, he was throwing one in the air like a ball. It did not survive, so I would never let a boxer with chicks unattended.

I have been a long time Boxer owner. I think I have owned about 6. The one I have now is 2 years old. I would not really trust her with the chicks alone, but she doesn't really care about the adult chickens unless they are on the other side of the fence. Then she feels like she needs to bark at them non-stop. Silly dog!!
When we had out first hatch, we had the chicks in our bathtub and my toddler went in and got a chick out. Big NO NO! My boxer went in and took the chick away and brought it to my husband. It was all wet, but just fine. Good Dog!!!
Most Boxers don't have much farm animal sence, but they seem to take in all the animals you make family.
Good luck!! 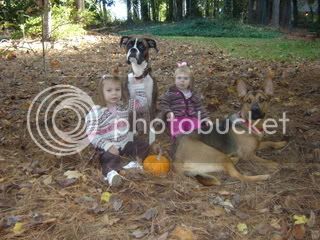 She has a large run, but if she escapes the house, she heads for the coop/pen as fast as she can. She barks like crazy and tries to bite the chicken wire. I think she'd be a bit too rough on the girls if she got to them.

Glad to know there are other boxer lovers here.

I have a dog that we recently rescued from a local SPCA Shelter as a 2yro. She hasn't really been properly socialized with any animals that I know of prior to us adopting her, but she turned out to be great.

At first she pinned my hen down and snatched a rooster (both of the times in attempts to bathe them - she has to lick EVERYTHING), but after a quick yelling at, she has never done that again (the chickens were fine). She's still young and loves to play, so I really think her mentality is set on fun mode rather than hunt/kill mode, but still... she's much bigger then them so I wouldn't trust her totally alone with them, but as I have mentioned, she hasn't tried anything of the sort since. In fact, we encourage her to help out and she helps herd the chicken back in the coop at dusk.

Need to ramble about a cat....