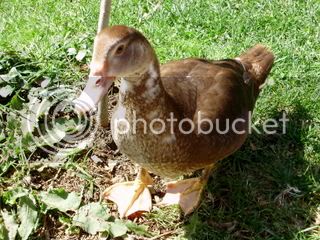 Very pretty duck! What kind is it?

he/she is a rescued Muscovy

is it a muscovy. mix? Wheres the red fleshy stuff? If i had to guess tho i'd say hen!

I'm no expert though at all!

I would say duck at this time as the feet are not frankenfeet from what I can see. Scovy drakes have HUGER feet than the ducks.

Thanks!! I am clinging to your guess. 5 huge drakes and one tiny mallard duck do not make for a good ratio going in to the winter. Not sure if it is a cross or not. Were brought in as "mallard" ducklings to the rehab place that I work when those that would know were away for the day. Clearly NOT mallards, they were given to me to raise and see what the heck they were. We are not supposed to take in domestic animals. Never having dealt with Muscovies, I am at a loss to what the heck they are. Glad to hear that you don't think her feet are really large. She and her litter mate make trilling sounds not hisses if that helps. I can't believe the rate at which these 2 grew!!!
Unfortunately, the Rouen that came in at the same time as them but from a different location has turned out to be a male. Sigh. What gives??? Of the 11 Wood Ducks that I raised this year and released, only 2 were female!!
Last edited: Sep 20, 2008

Do I need to separate my drakes from the girls??