Looking for stories on Brahmas - how they lay, temperament, feed-to-egg ratios, etc...

Also looking for your pics, if you please!

I love my brahmas. I have all three colors so I get a variety within the same breed.
I'm getting 6 to 8 eggs a day and mine will be 6 months old tomorrow and that's only with 8 of my girls laying. I have 16 hens, so I'm expecting to be overrun with eggs very soon. 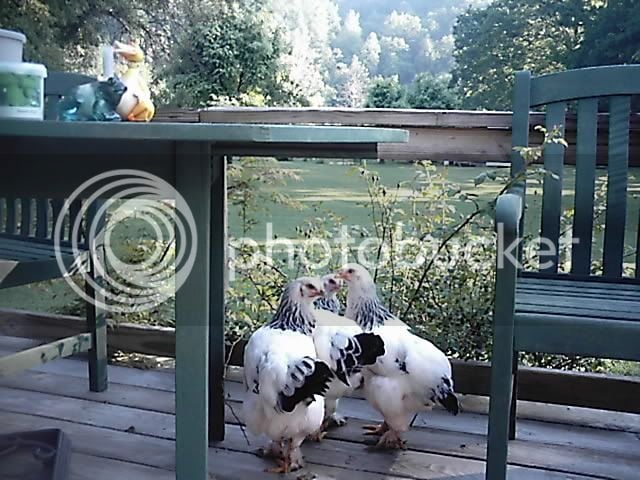 These are some of my young nosy girls from this summer, they are a friendly breed and lay real well thru the winter months, I get an egg a day from the younger hens, my older ones are going on 6 years old and they still lay. Egg to Feed ration is no different then any other breed.
C

wow... they are really beautiful. So is your VIEW!

Do they come in colors other than white or black?
M

There are buff brahmas that are really pretty, too... but you still have the "columbian" color pattern with the black.

My little (now big) girl started laying at 19 weeks, and has only missed maybe two days in the last 4 weeks.

Quote:
They do come in buff too as Mrs. AK said. The buffs are my favorite eye candy, but all the colors are beautiful in their own way. Yesterday my baby chicken Lil'Bit was standing in the sun. She's a dark but her dark feathers had an awesome blue sheen to them in the sun. I've noticed an difference in the personality between the three colors too, but that may just be my birds from the same hatchery. My lights are the go-getters, always the first to try new things. My buffs are quiet and shy but very sweet and loving when you pick them up. My darks tend to stick together as a flock within a flock.
Here's a pic of Thor my dark brahma roo with two buff hens and a dark hen. 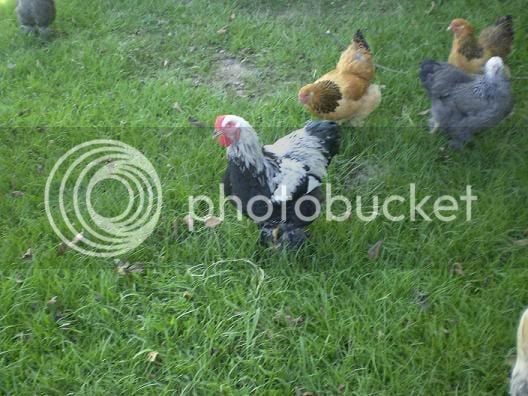 I love my Brahmas, but they do have a few minor downsides to go along with all their good points.

They're probably as efficient an eater as any of your other large heritage/standard breeds and will eat more than, say, a Leghorn or a sexlink in order to produce the same amount of eggs. Still, they're on par with Plymouth Rocks, Orpingtons and Wyandottes. I wouldn't call them laying machines since they're a dual purpose breed that leans toward meat - not bred for egg production.

They take much longer to mature than a lot of your other breeds, usually laying at 7-8 months rather than 6-7 months.

They are great winter layers, and great winter chickens in general for areas with a colder climate, but they really don't like the heat and will slow down when temperatures rise in the summer.

They are extremely docile and, although somewhat bullied, stand their ground more than an Orpington. You won't have to worry about turning your back on a Brahma rooster.

I've seen pictures of Gold Brahmas. I want. A lot. I think those pesky folks in Britland and Aussieville have most of the colors outside of the main three: Light, Dark and Buff

All of this is _extremely_ general. Some hatchery/breeder strains may be bred more for egg production/fast growth and lay better than some show strains that grow to the size of small poofy dinosaurs. With all the different strains of chickens out there it's becoming harder and harder to give a good idea as to what exactly you'll get with a breed. I know one of these days I'm going to read about a killer Orpington rooster or a Leghorn rooster that dresses out like a Cornish-Rock.

I love my Brahmas, they're slow growers, so not a good meat breed, but lay well, and are wonderful mothers. They can be very hard to get out of brood, when they decide to go broody at a bad time. I have some light Brahmas, and still have a buff Brahma roo, but no more pure bred buff B. hens. I do have some Buff B. half breed hens. Mixed with Australorp, dark cornish, Light B., and EE. They're some very pretty chickens. Mellow temperament.

Crossing Dark Brahma roo x with these hens, what will I get?