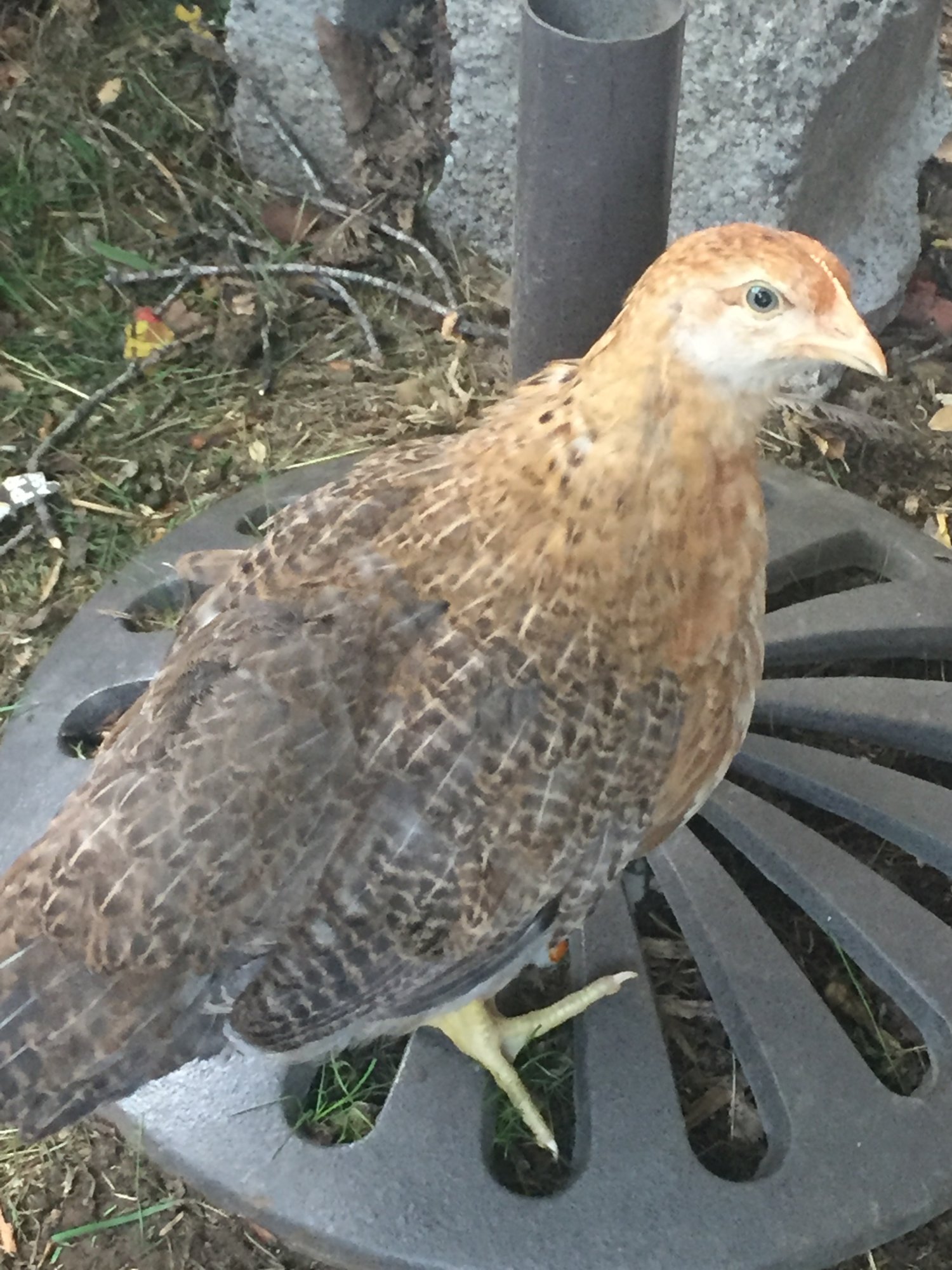 I'm sure this girl is a mix but any idea what breed(s) she may be?!

@Lady of McCamley < this person is the best at guessing!

Where did you get this chick?

A local lady just has a bunch of "mixed breed" chickens. Tried some hatching eggs and this is one of the ones we got. Only one that looks like this.

not a clue but, appears to be a pullet

Close to impossible to really say, but I can say that she's a mix of a yellow-legged, single combed breed for sure.

We can't know with any certainty what she is, but we can eliminate what she likely can't be.

As she is a brown partridge (with maybe some soft barring on the back) with gold hackle, we know there aren't any black birds or white dominant birds in her background since she is neither white based nor black based. So we probably can safely eliminate Australorp, White Leghorn, black Orpington, Minorca any close generation back.

We can also eliminate the strong black-white barred birds, like Barred Rock and Cuckoo Marans, as she is neither crisply barred (if father was BR) nor black based (if mother was BR). Second generation barring does soften as it is a single gene, but barring is strongly dominant, and her feathers don't line up in a truly black-white barred pattern, and what is barred is only on her back.

However she does have the soft barring of breeds like the Rhodebar and Cream Legbar. She may have a red-barred or soft-barred bird in her background somewhere....or third generation away from any barred bird.

Since she is pretty complete in partridge effect, and in hackle effect, it is highly likely at least one parent was partridge or buff or possibly red (although I find red seems to appear in mixed breedings over non-red birds...when white and black are not present).

She has barring rather than lacing, so I'll eliminate Barnevelder (which lacing does come through though incomplete in first generation and then completely in second generation mixings if bred back to the laced parent). I'll also eliminate other laced birds, especially any Wyandotte as those are rose comb (which is dominant).

Since you say she is the only one, she may be a genetic throw back to some parents a generation or two, or three, ago. I've had that happen. With subsequent mixings of mixed birds, you see back patterns appear.

What you won't see is dominant black, white, or strong black-white barring being eliminated completely.

She is also small single, comb (even WL females have more comb at a young age), with crisp yellow legs. (Leg color is actually tricky....I've had grey legged chicks from a Barnevelder and Cal-Grey mix due to the black front wash on the Cal-Grey legs)....but that just leads me to think Barred Rock isn't in a close background, at least not a parent.

Her body style does not indicate game in her background, but layer types.

Therefore, my best guess is she is a mix of red, partridge, buff, single comb, white or yellow legged, layer types.

With that limitation, my guess would be a mix of Brown Leghorn (she has some appearance there), Welsummer (some strong possibility there), Buff Orpington (not much body type resemblance there, yet, she's young) any of the RIR or RSL's in background, and a barred bird somewhere about third generation back or a softer barred bird more recently back (like a Rhodebar or Cream Legbar...but no crest, so not likely CL as those crests have been dominant for me).

Without genetic testing, there is no way to know what she is, but you can eliminate what she probably can't be....but in time a mix of a mix of a mix is simply a mix breed bird.

I'd be interested in what her siblings were like. That may tell you more of the flock.

I told you she ^^^ was the best!
Thanks @Lady of McCamley

Thank you!!! That is fantastic!

K
What breeds are these chicks

Any ideas on her breed?