Breeding back to parent peafowl?

I read a previous thread that referenced breeding a peacock back to its mother. Is that a normal thing to do? I had thought I would have to purchase another bloodline to keep my peafowl healthy. Does anyone have any thoughts on this?

old biddy said:
I read a previous thread that referenced breeding a peacock back to its mother. Is that a normal thing to do? I had thought I would have to purchase another bloodline to keep my peafowl healthy. Does anyone have any thoughts on this?
Click to expand...

This is an issue that is not specific to pea fowl. Breeding a son back to its mother or a daughter back to its father is considered linebreeding and is considered an acceptable practice. Yes it would be best to bring in outside stock at least from time to time.

When you have a good line of birds, breeding offspring back to parents is preferable, then to grandparents, etc. Picking traits within your line that you are trying to upgrade, eliminate, or continue with are better managed that way. Introducing new bloodlines, runs the risk of introducing a whole new batch of flaws, that is in the new bloodline.

Wow, that is the opposite of breeding dogs.. I have to learn all this if I ever want to breed my birds..thanks for sharing..

It's also a method used to develop new varieties more. Without linebreeding it would be very difficult for new colors to be propagated. Most colors start with the appearance of a single bird (usually a hen) so linbreeding is used to propagate the color. I use it sometimes if I have an exceptional bird whose traits I want to spread.

Still have to know to see the faults in peacocks ...!
Here someone sees a failure? 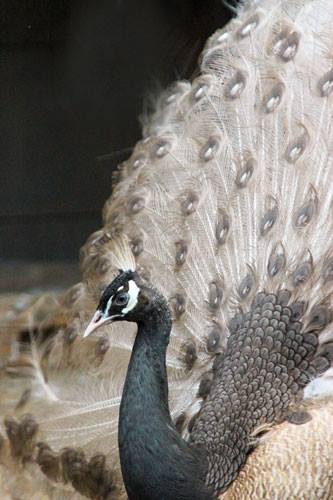 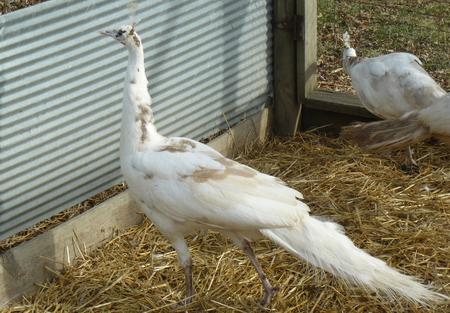 People keep citing forms of inbreeding being used as a method for "creating a line" of whatever as a justification for questions like that posed by the OP. What doesn't get mentioned is the other part of "creating a line" -- ruthless culling. See, when you breed relatives together, you're increasing homozygosity, which is another way of saying "bringing out the recessive traits" in offspring. There are good and bad traits that will pop up, and responsible breeders aiming to establish a line will expect to see poor offspring that would need to be culled, retaining only the best 10% or so for future breeding. Over several generations, you'll end up with breeder birds that start producing cookie-cutter offspring because the line has become fixed, but you will have to figure out how to "dispose of" all the rest before then. Is this something in your plans?

Yes, breeders will use inbreeding when trying to produce more of a rare new mutation, but the responsible ones will follow that with outcrosses to bring new blood back in. This is because there are two ways to reduce the chances of negative recessives from appearing in offspring. The first is what I mentioned above -- creating a line over several generations of breeding together relatives and ruthlessly culling anything that doesn't meet your standards. After a few generations, the negative recessives will have been mostly "flushed out" of the line, and the remaining breeder birds probably won't even carry those traits anymore. The second is to choose unrelated breeder birds who are less likely to share the same negative recessives, and thus their offspring won't show them. You might still get the odd poor-quality chick once in a while, but overall, you'll have a greater percentage of healthy and sturdy birds in every generation, even if they're more variable.

So, inbreeding in and of itself isn't bad. But if you're going to do it, realize that it's just one part of "breeding a line" -- the other being to expect inferior offspring at first, and the need to cull ruthlessly.

I sell some of my culls off to people who just want something pretty in their yard. The ones with permanent deformities that would impede quality of life I butcher. I wish more pea breeders didn't just "factory breed" birds and instead focused on quality.

Hello! I've been catching up on some of the posts on this forum, and stumbled upon yours on outcrossing with Indigo. Did you ever get those birds? If so, put the males with Bronze hens -- daughters would be Indigo, sons would be Bronze split to Purple. Put those sons with your original Indigo hen, and you'll get a pretty much equal mix of Bronze and Indigo, with sons split to Purple. Repeat that with any Indigo male onto another unrelated Bronze hen.

I'm still scratching my head about Hazel -- I can't understand how it can ALSO be genetically Bronze-Purple. I'm thinking that somewhere in the mix another mutation got in, and Clifton lost track of it by the time the first Indigo and Hazel offspring were produced. He saw "two versions of the combination", but I'm thinking he actually got two different combinations.