I had a buckeye roo that really took to my silkie hen (white). The female was brown with a black tuft. The males were absolutely stunning, but had a pretty aggressive personality. 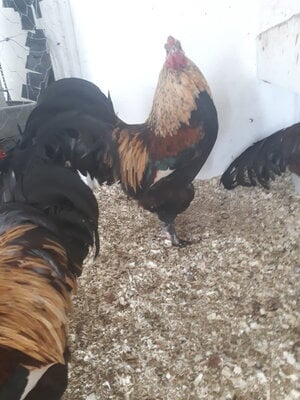 Would the Buckeye be the rooster?

The Buckeye will give a pea comb to the offspring, although if you cross with a single-comb breed, the offspring will have a larger pea comb than the Buckeye parent.
Other than that, they will look a lot like Rhode Island Red crosses (which are much more common, so easier to search for pictures of.)

Buckeye (male) x Barred Rock (female) = sexlink chicks. Females are mostly black, maybe with red in their neck/breast as they grow; males black with white barring (probably hatch with a white spot on the head.)
--or--Buckeye (female) x Barred Rock (male) = chicks that look mostly like the Barred Rock father (except both genders have the darker barring usually found in female Barred Rocks.)

Buckeye x Easter Egger = color of chick varies, depending on the color of the Easter egger. Chicks could match either parent, or be different than either.
You must log in or register to reply here.
Share:
Reddit Pinterest Tumblr WhatsApp Email Link