It's my first hatch, and I diy'd an incubator, and all of my eggs are developing haha which is great but I'm just waiting for something to go horribly wrong lol. So far so good!
I have steady hands and a good phone camera and some lovely pale silkie eggs so I've gotten some great candling pictures though! Who doesn't like more pictures.

As far as I can tell they're all doing great so far but I noticed some things that I haven't seen mentioned before or not all in the same place, and I thought it might be helpful for someone.

My pics start on day three, that's when I got a flashlight and was able to stop using my phone light but I'm hand turning so I usually candle at least a few eggs a day while I'm doing that anyways. 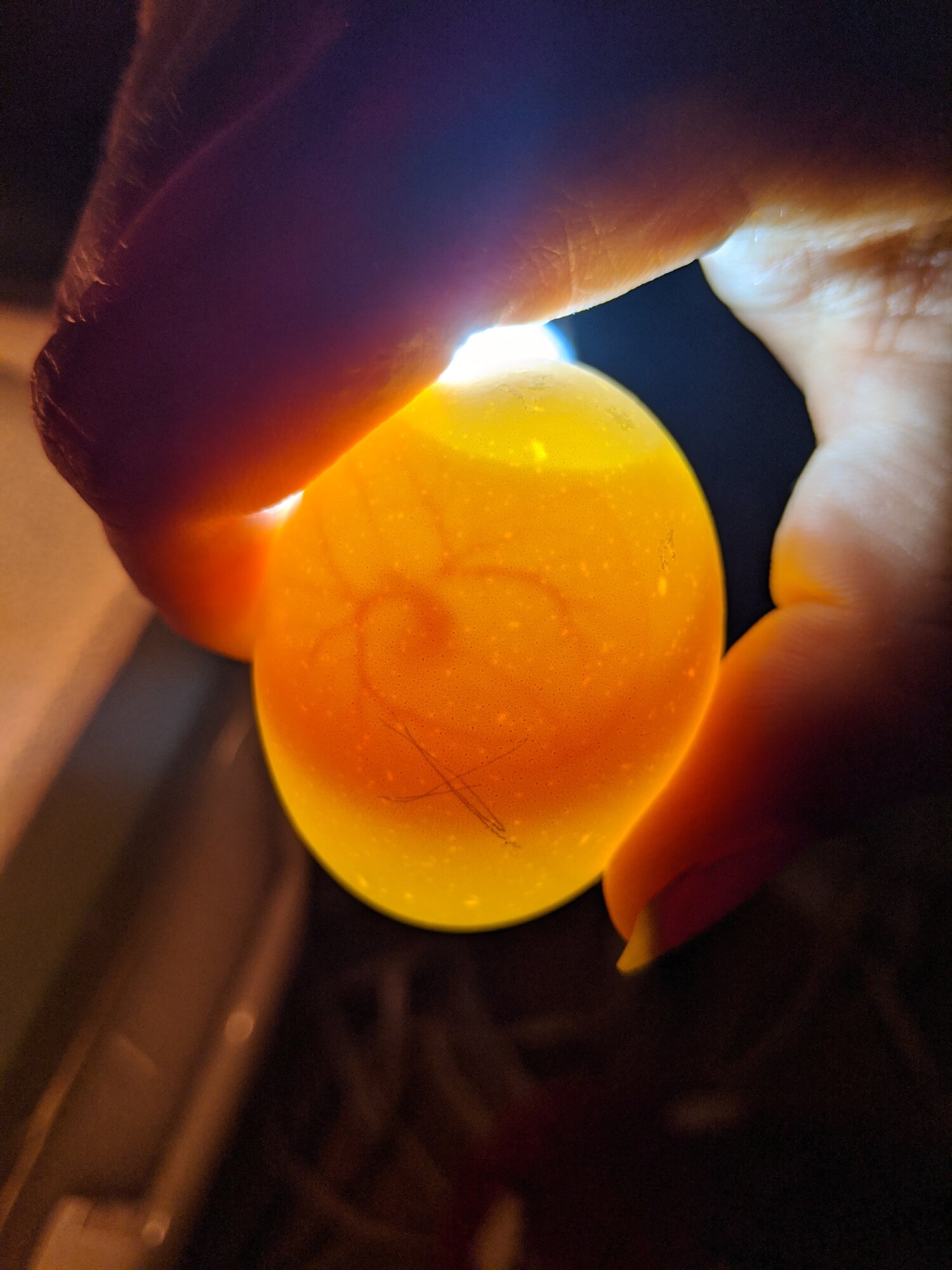 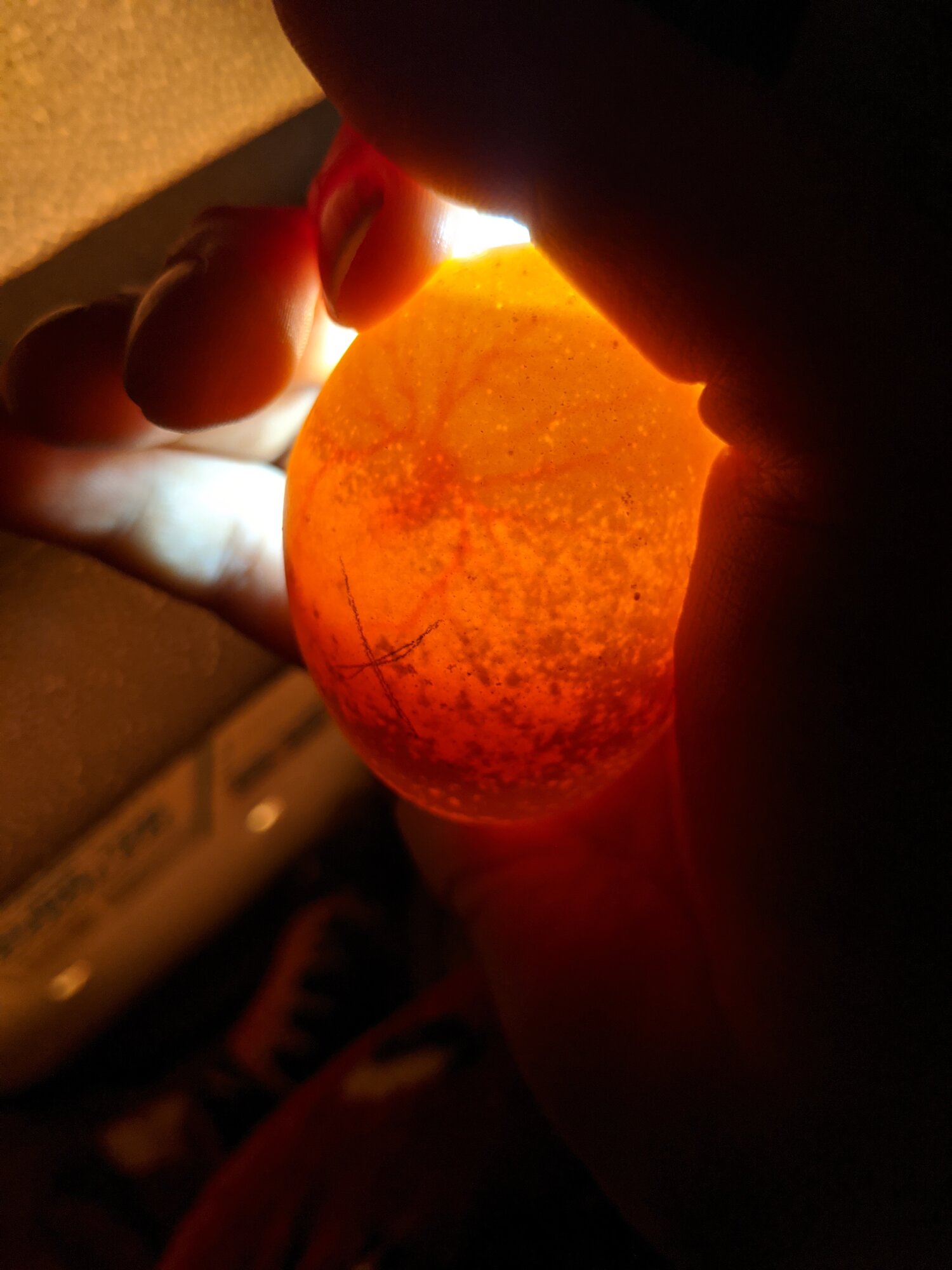 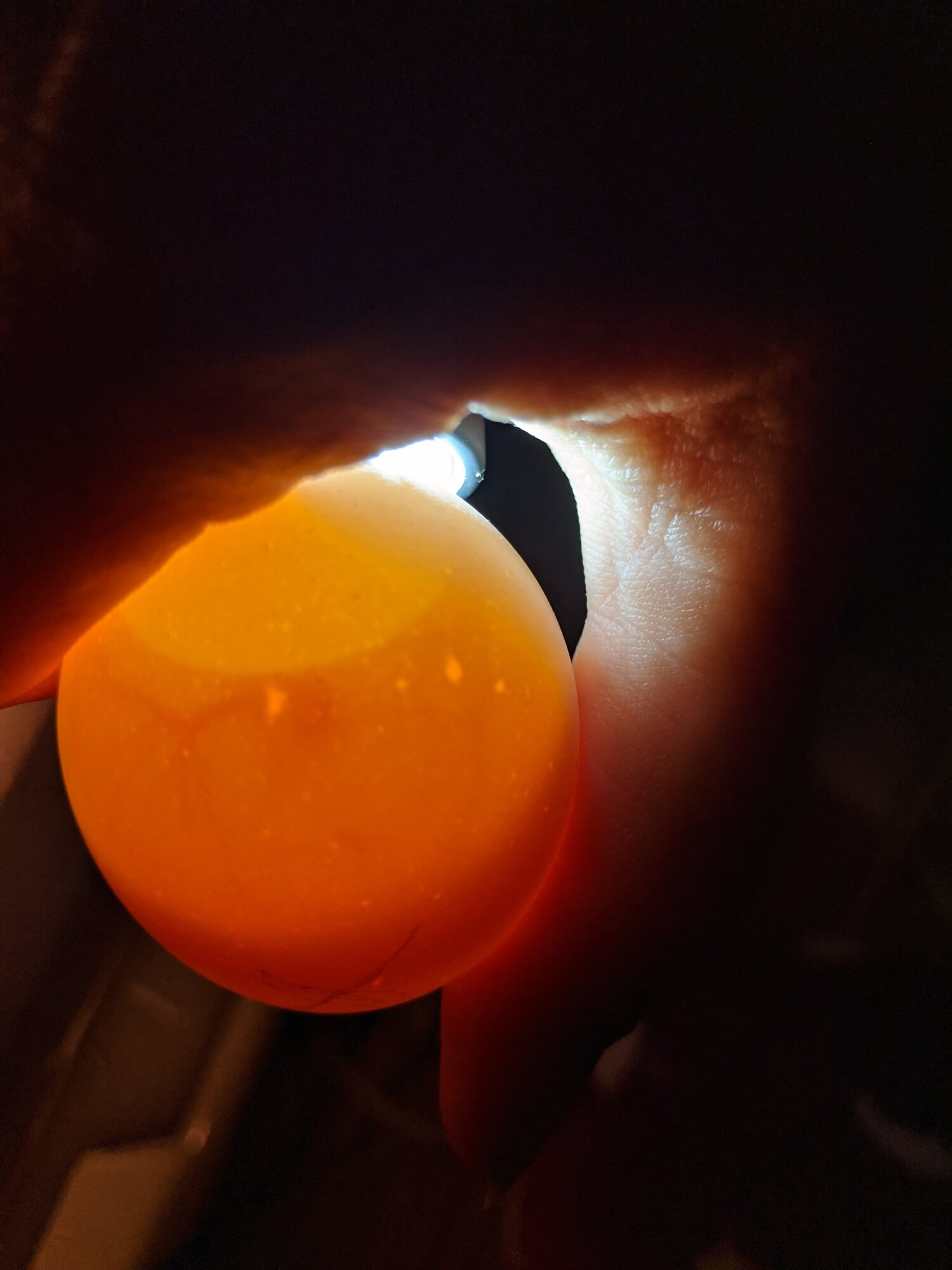 This was a really exciting day because I could see the heartbeat! I spotted veins in some of my eggs the day before but it was really cool to catch the heartbeat, by the next day you couldn't detect it any more.
One thing I noticed, and it's visible in the first and last pictures here, is that thick dark ring that the shadow of the yolk makes. The last picture in particular, the embryo was hiding under the air cell and hard to find, I had a couple eggs like that where it wasn't visible right away but that ominous shadow was- I worried that it was a blood ring. I was able to locate the embryo in all of my eggs over a couple cycles of turning but if I hadn't been doing that and had just candled once, I'd have made the same mistake Ive seen a few posts about and thought I had quitters. I was expecting quitters! But I turned the eggs and checked again later when the embryo had floated over to the other side and none of them were. Looking at confirmed blood rings, they seem to have much sharper edges than this shadow. 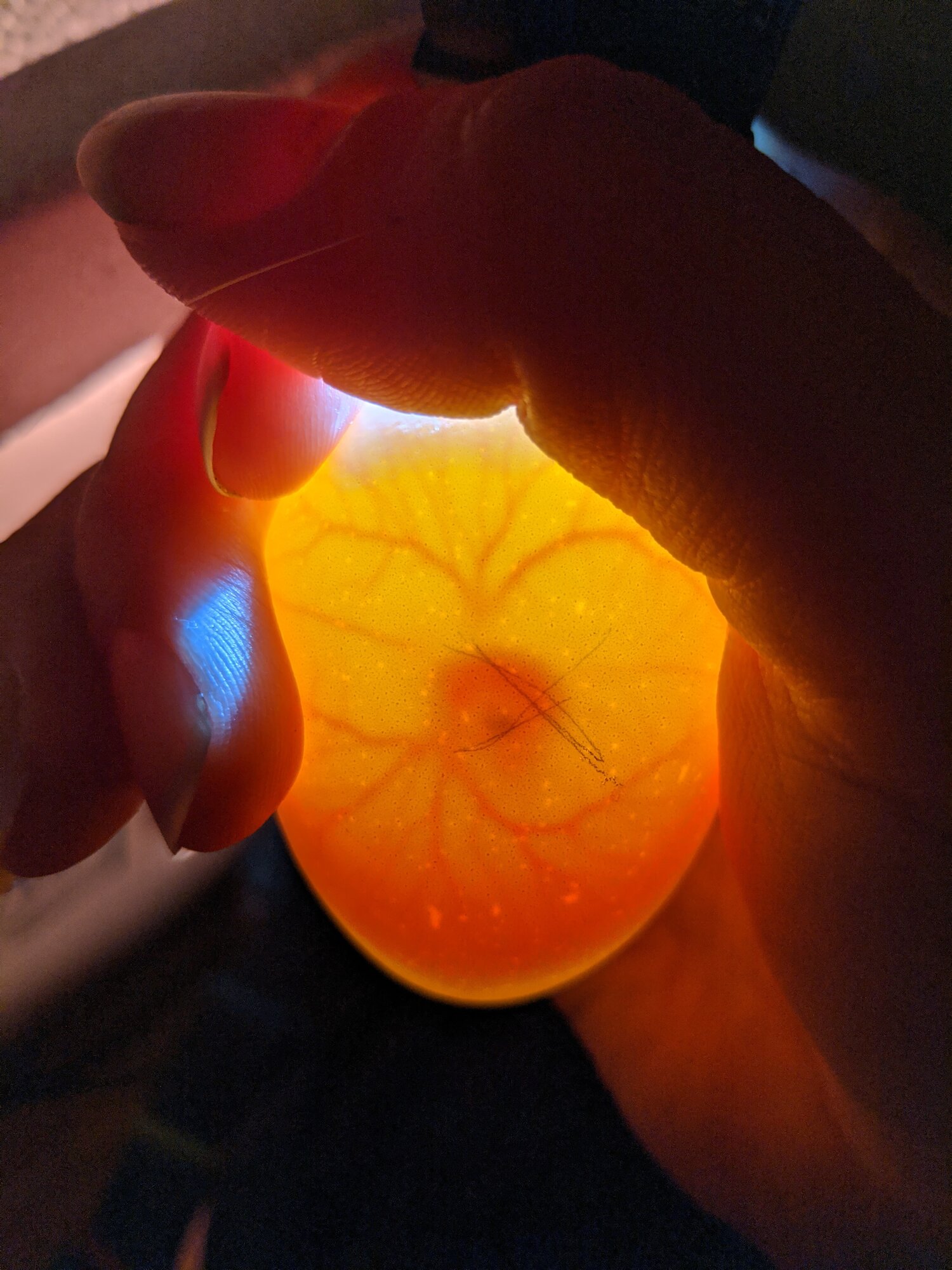 The window for seeing the heartbeat seemed to be no more than 24 hr. By the next evening it was gone and the noticeable bigger embryo has eyes forming. 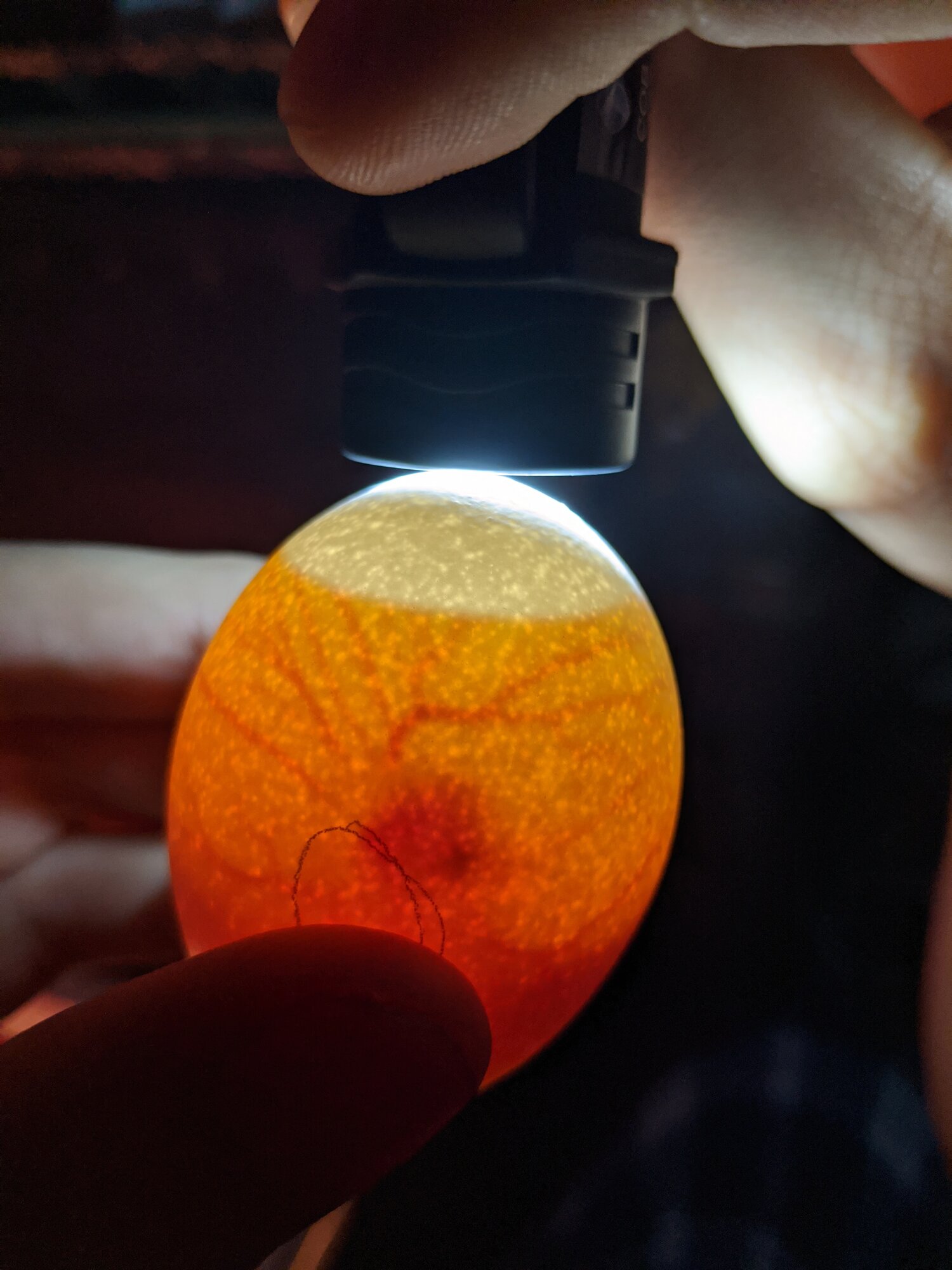 No big changes, everything is a bit bigger, a bit more developed. The veins are spreading around the shell. 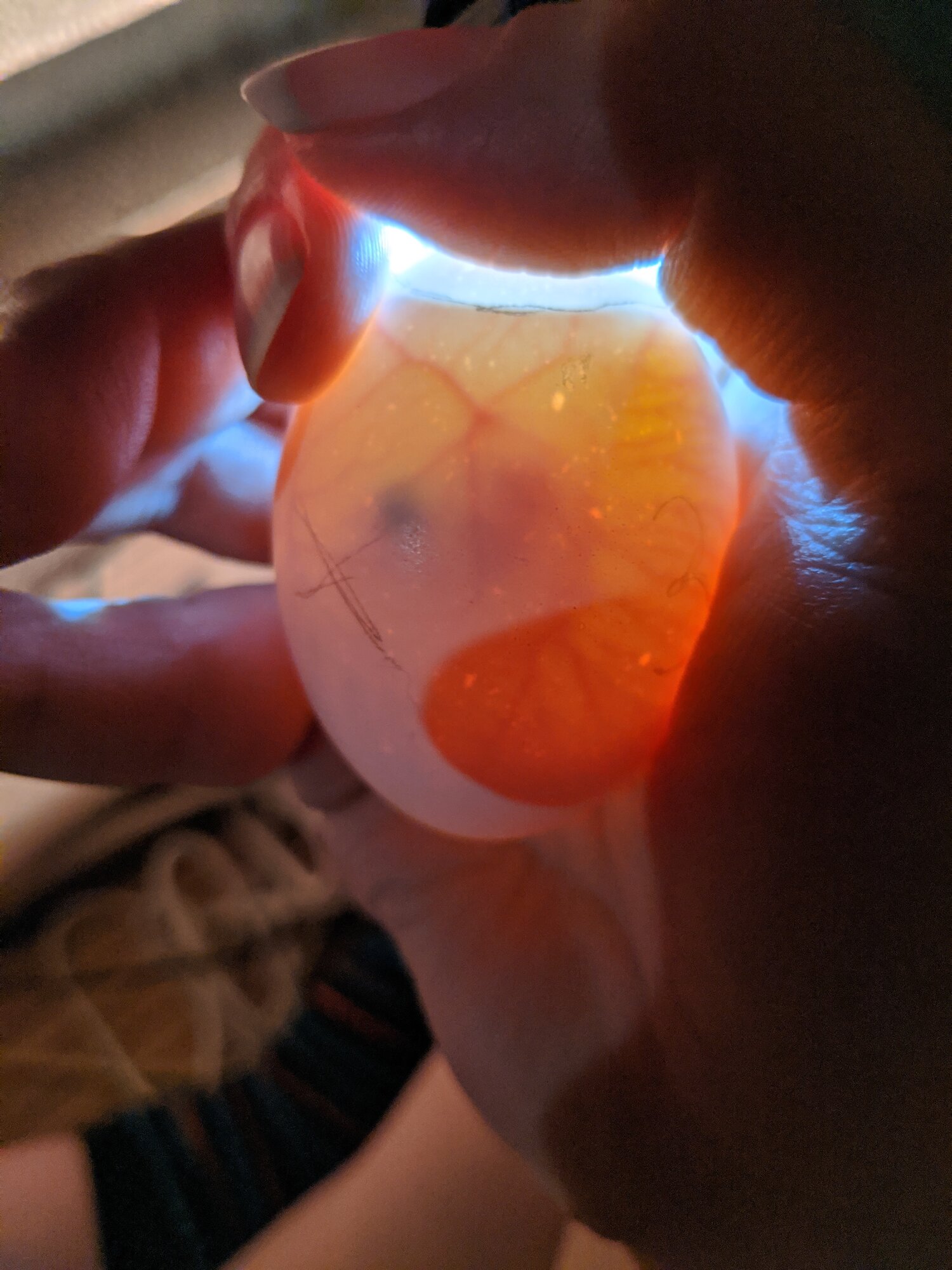 Bigger and twitchier! At this stage the embryos were all still sitting close to the edge of the egg, with clearly visible eyes and often tiny nubs of developing limbs could be seen. I marked all my air cells on this day and weighed my eggs to how they compared to their initial weights.

Whuf, this is a lot to type on my phone, I'm gonna take a break and come back with a few more days in another post. 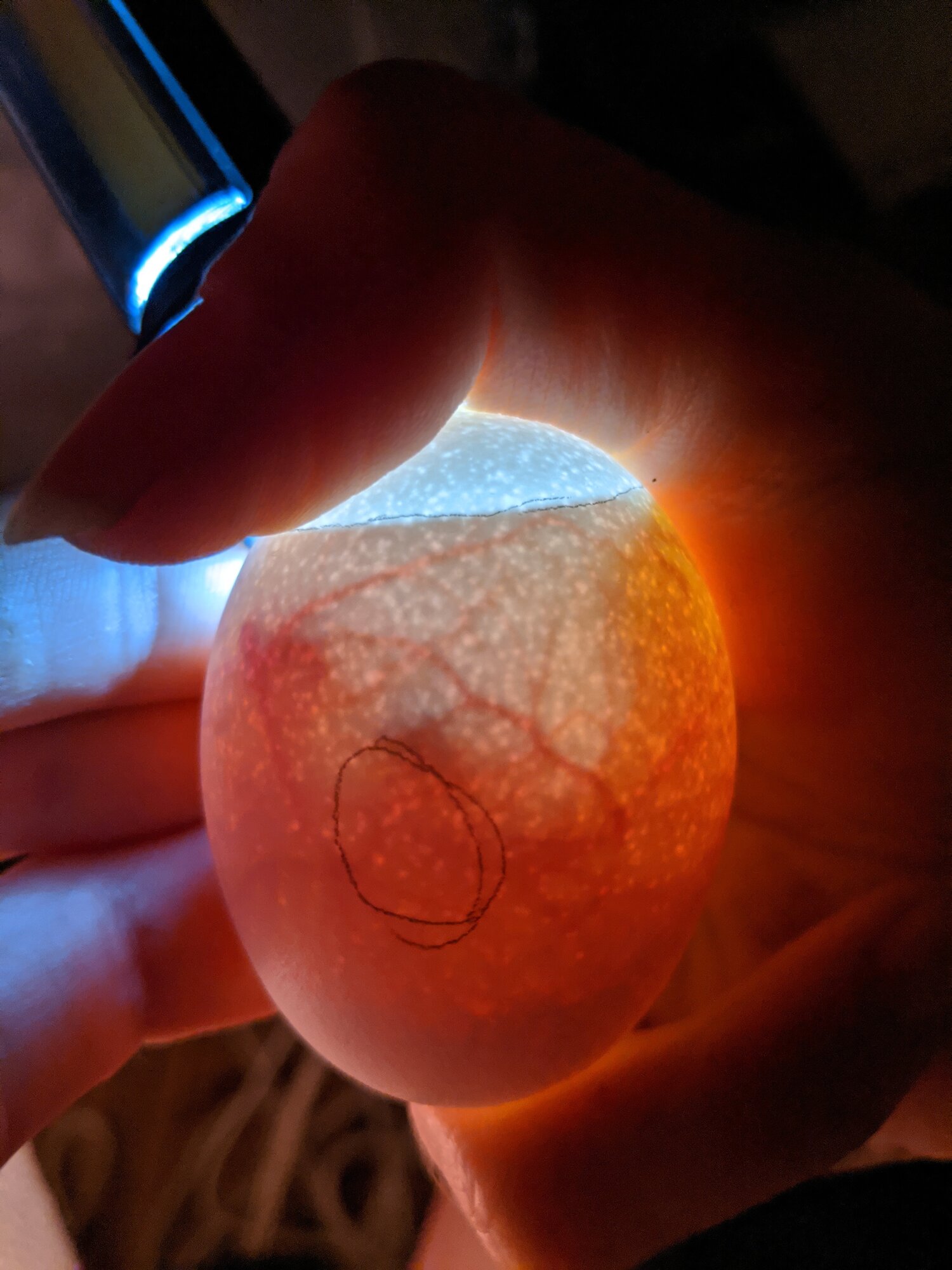 Movement is still visible in most eggs most of the time, but the embryo is sitting further away from the edge so there's seldom anything specific you can discern aside from that. Sometimes it'll be close enough that you can see the eye, sometimes not. 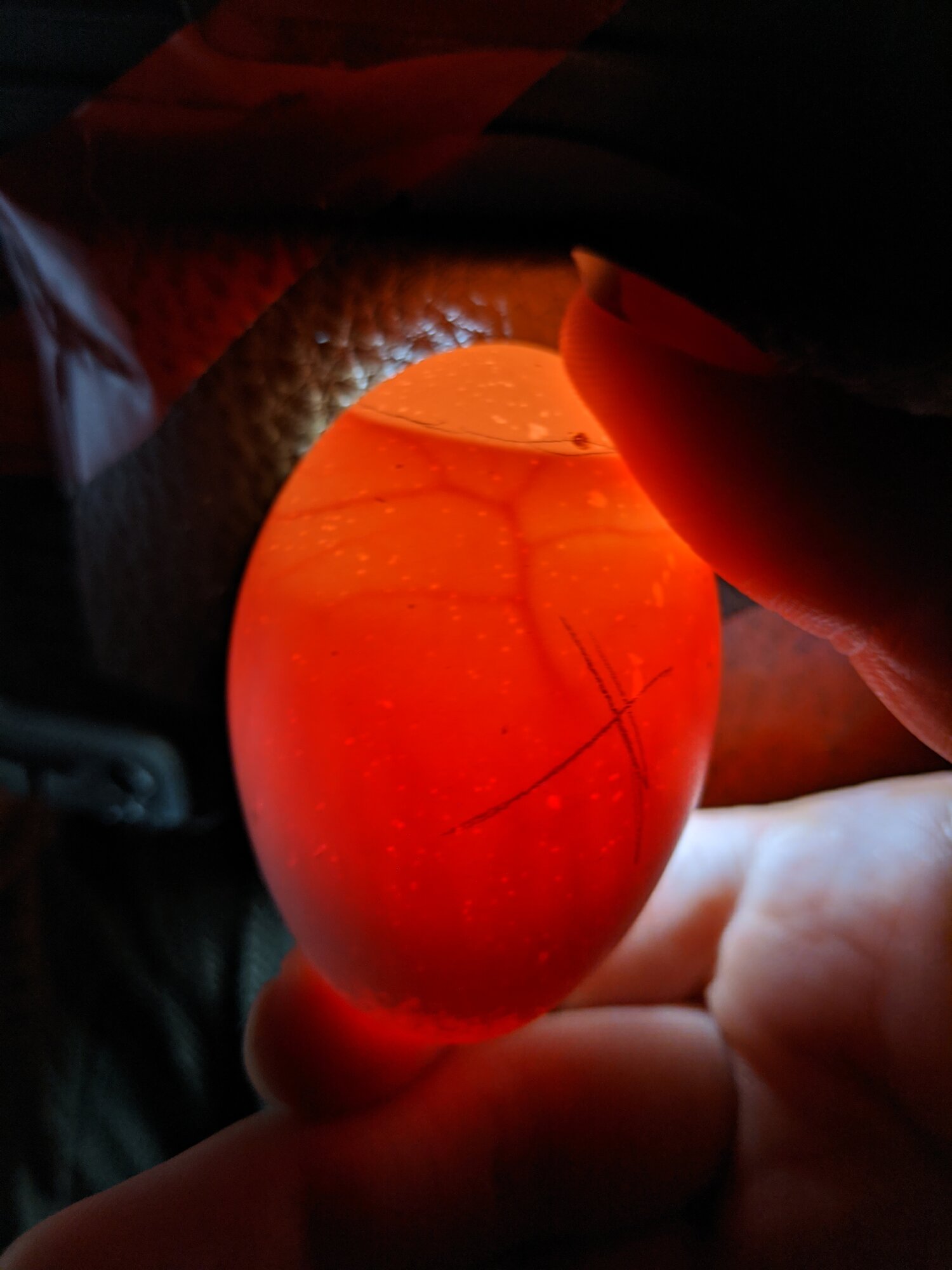 Maybe the worst day for embryo visibility so far. I could tell they were there and alive from the moving smudge, but couldn't see and discernable anatomy in any of the eggs I looked at. Most of my air cells seemed to have barely or not at all moved since I marked them and I began to worry they weren't on track even though I'm running the hatch fairly dry. 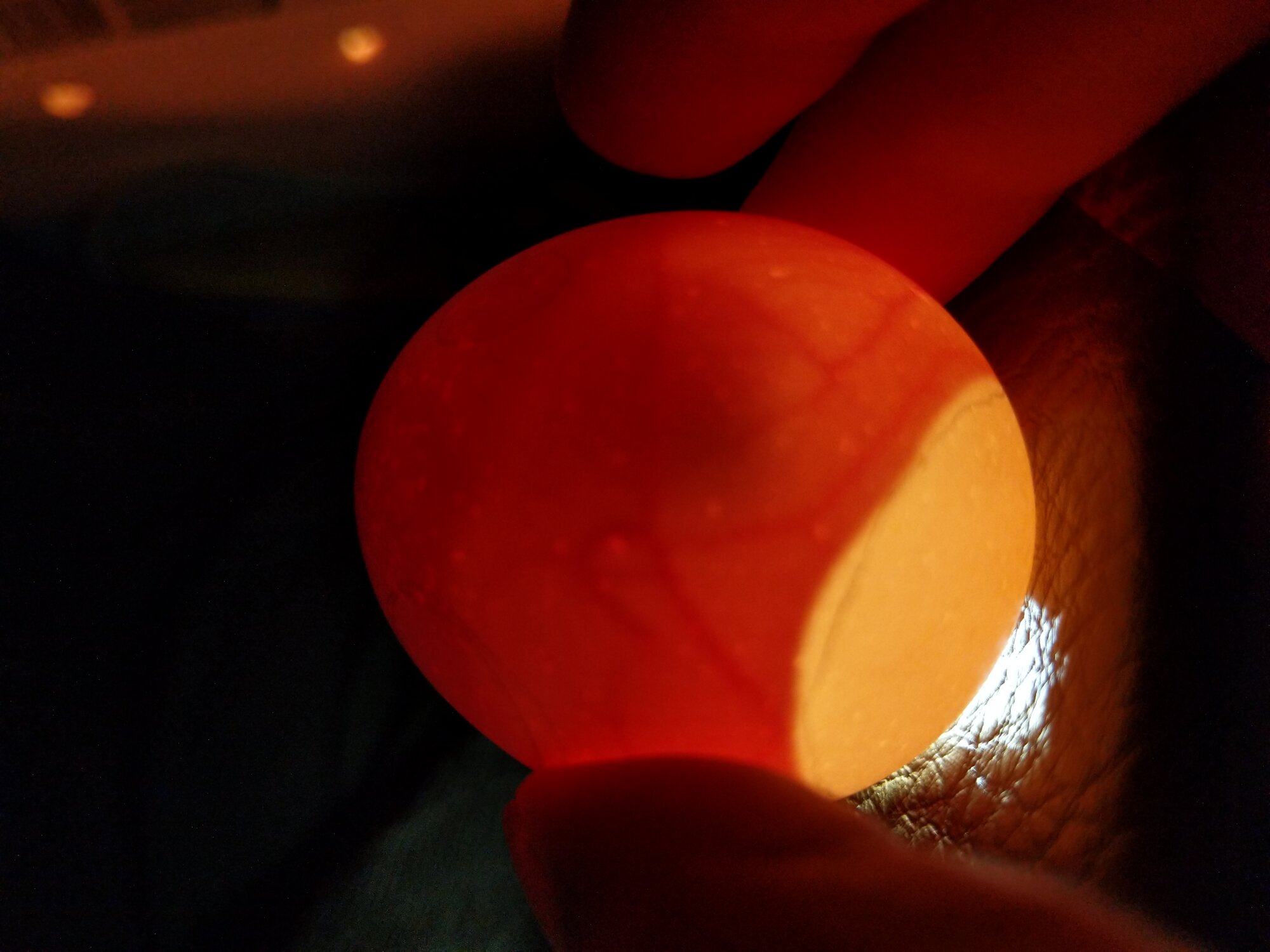 I candled all of my eggs, and all were developing well. I saw the shadow of a tiny foot! At this point most eggs were still just movement, but occasionally the right combination of position and light angle shows a bit of foot or silhouette of beak. 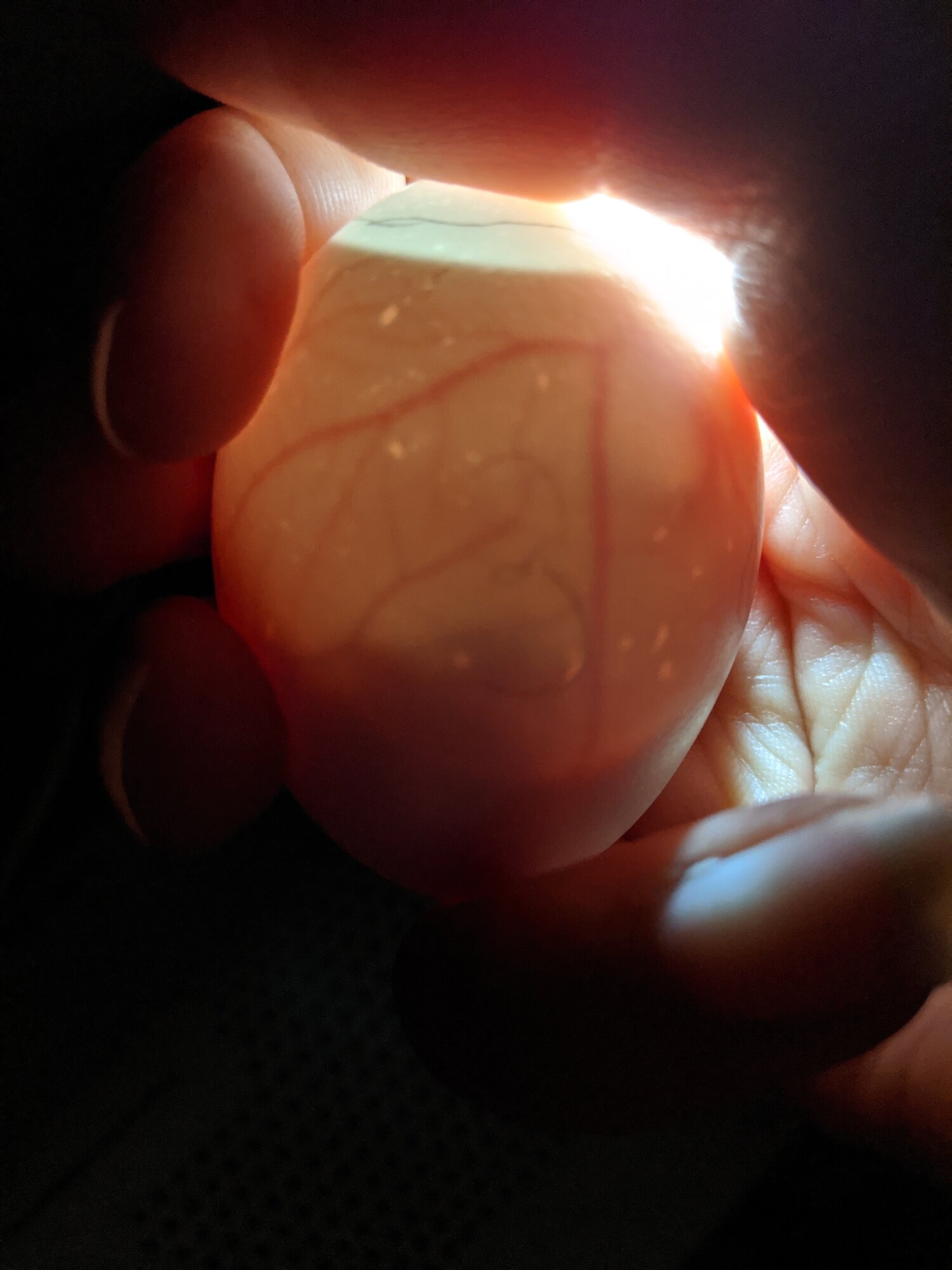 Egg #3 is the most translucent of the batch, it's also the first one I could see veins in. All the air cells seemed to make sudden progress at once. Veins are all the way around all or most eggs. 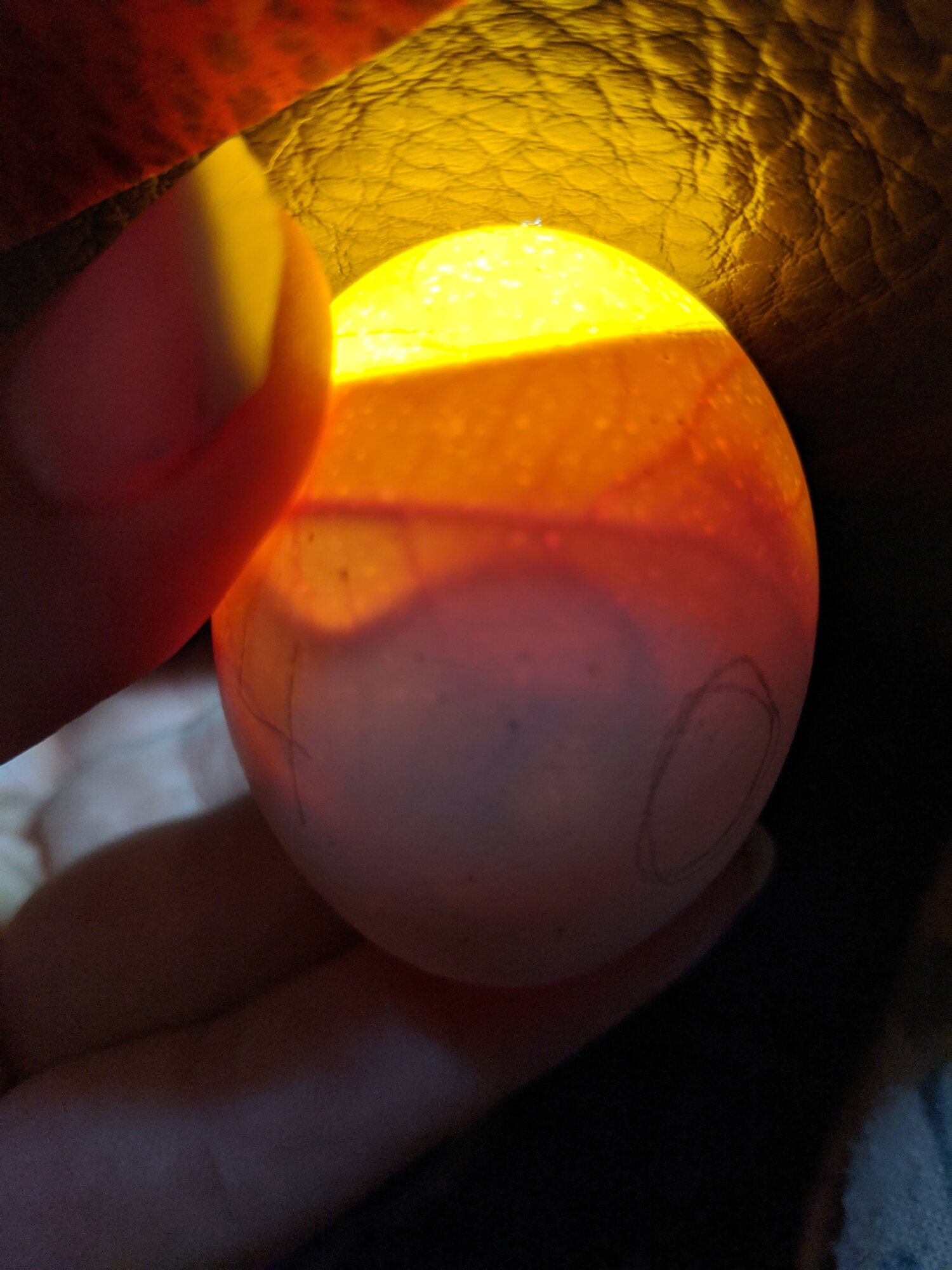 Still growing! Depending on the positioning of the various contents inside the egg and the angle of the light, sometimes they look pretty full and mucky, sometimes they look almost empty except the veins. Movement patterns have changed too- the early embryos did more of a consistent gentle curl, uncurl motion. Now they seem to rest, twitch, move gently back and forth, stretch their legs. 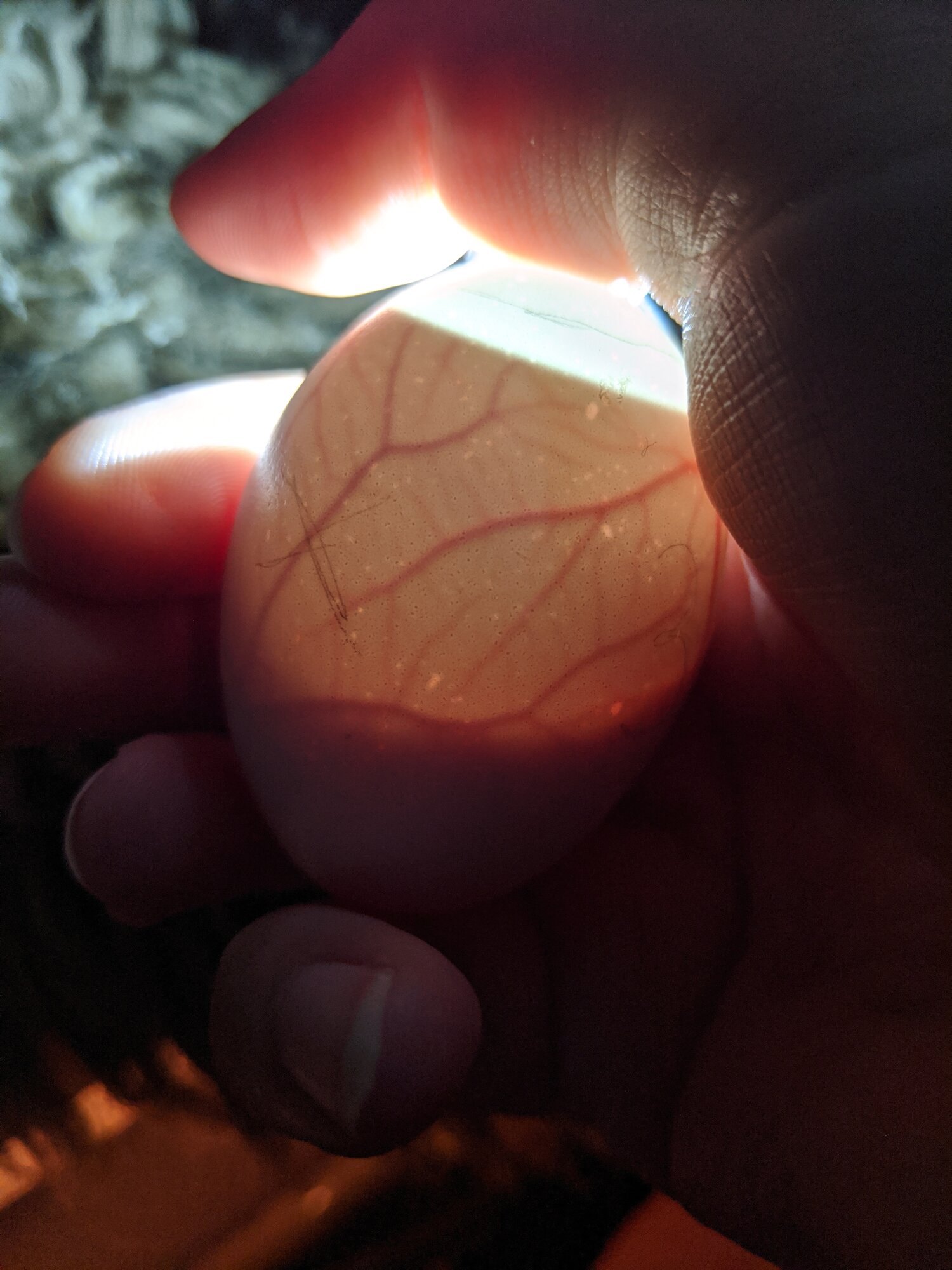 The veins are really getting big now, thick enough you can see light and shadow on them in some eggs. This was the first time I noticed that the eggs now have veins all the way down to the bottom of the small end, they can't have been there longer than a day or two but I haven't been consistently checking the small ends.

That's as far as we are! I'll be weighing them all again tonight and marking air cells, see if they're all still chugging along.

If I get a good hatch I'll post a breakdown of my diybator. Maybe if I get a bad one too, if I can identify where things go wrong. So far I have 14/14 developing! I was amazed not to have early quitters, the farm I got them from seems to be doing things right. The eggs are a mix of polish/silkie/showgirl/sizzle so it'll be an exciting hatch if they make it!

Here's the album of all my pics, in case anyone wants to look at more! There's a couple short videos in there too that show day 7 or so movement.
https://photos.app.goo.gl/qC9F411JKpNyVv2dA

Thanks!
They're all still going! My scale is not very precise but overall they seem to be on track there. They're definitely fuller now, and there's a fair difference between how full the bigger and smaller eggs are. It'll be interesting to see if the smaller ones hatch faster on average since it's a mix of polish and silkie. 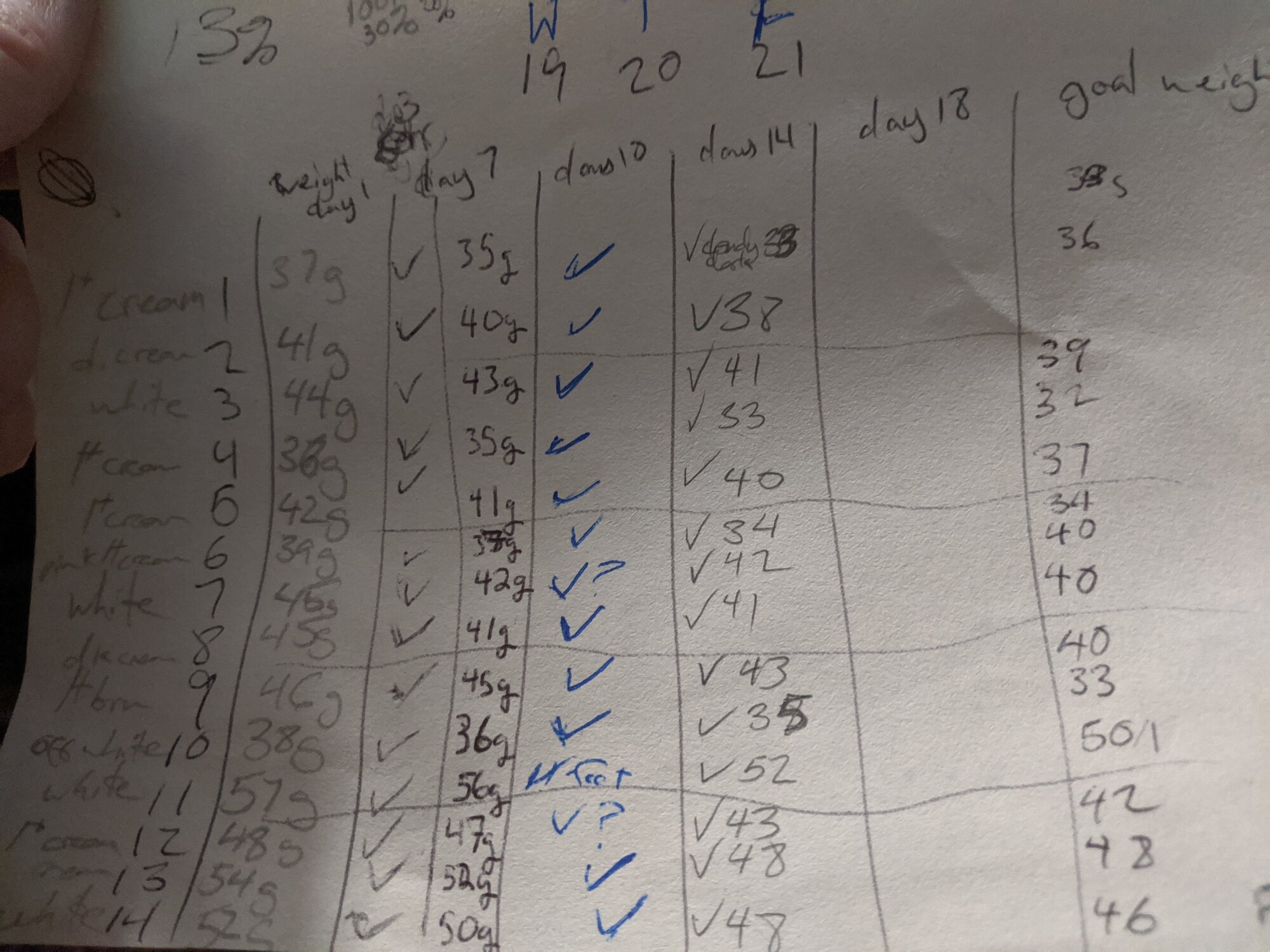 There is one there that seemed muddier than the others, but the air cell and veining are both clear and sharp and there's movement, its hard to tell if it's significant of just a weird shadow or something. It's one of my smallest eggs so it may just be that it's a bit full. We will see, I guess. I wasn't able to get a photo that showed it at all. 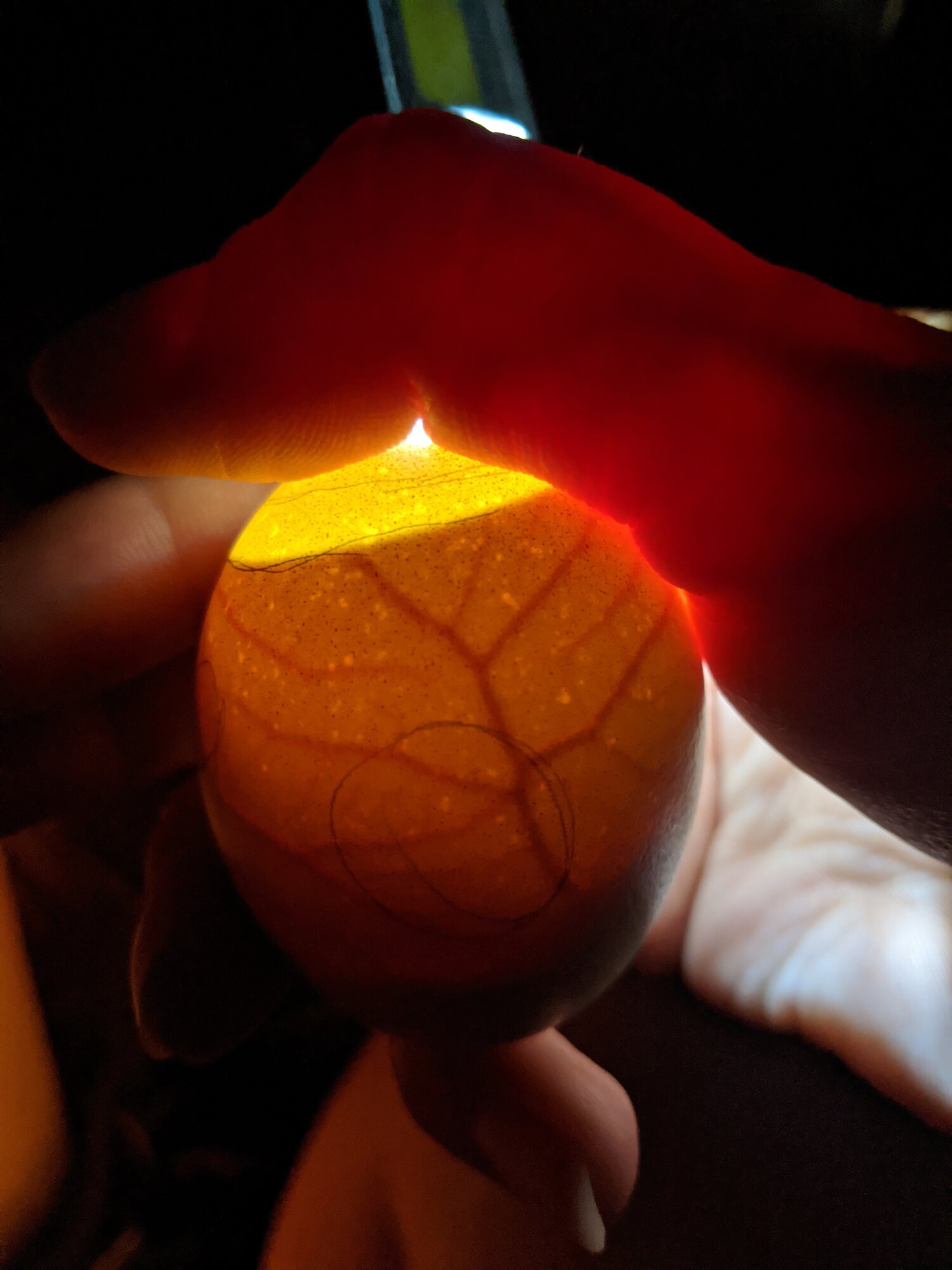 Day 13: The bottom of the eggs is finally getting interesting, and sometimes even has more action than the top, with clear movement and interesting silhouettes. 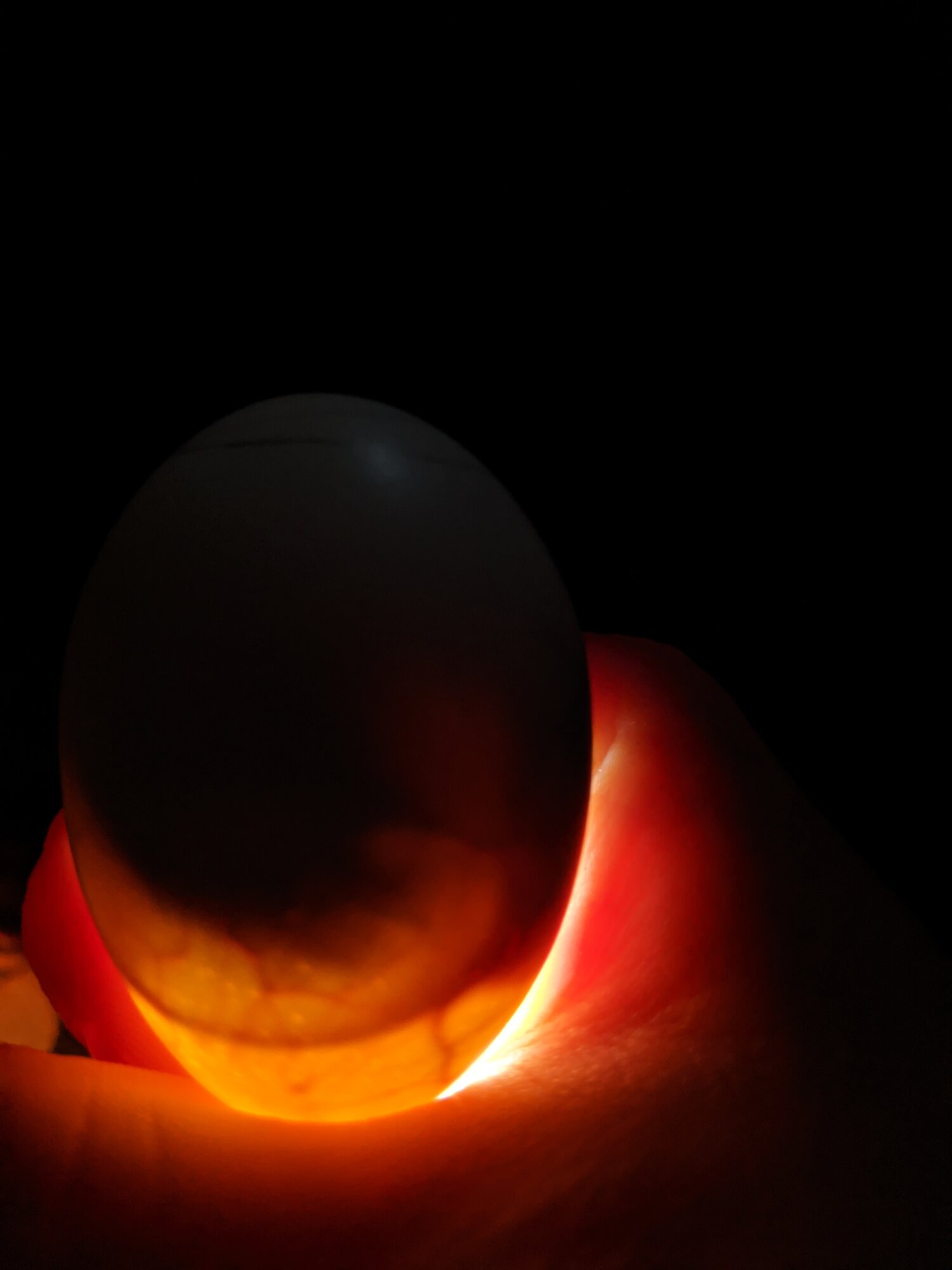 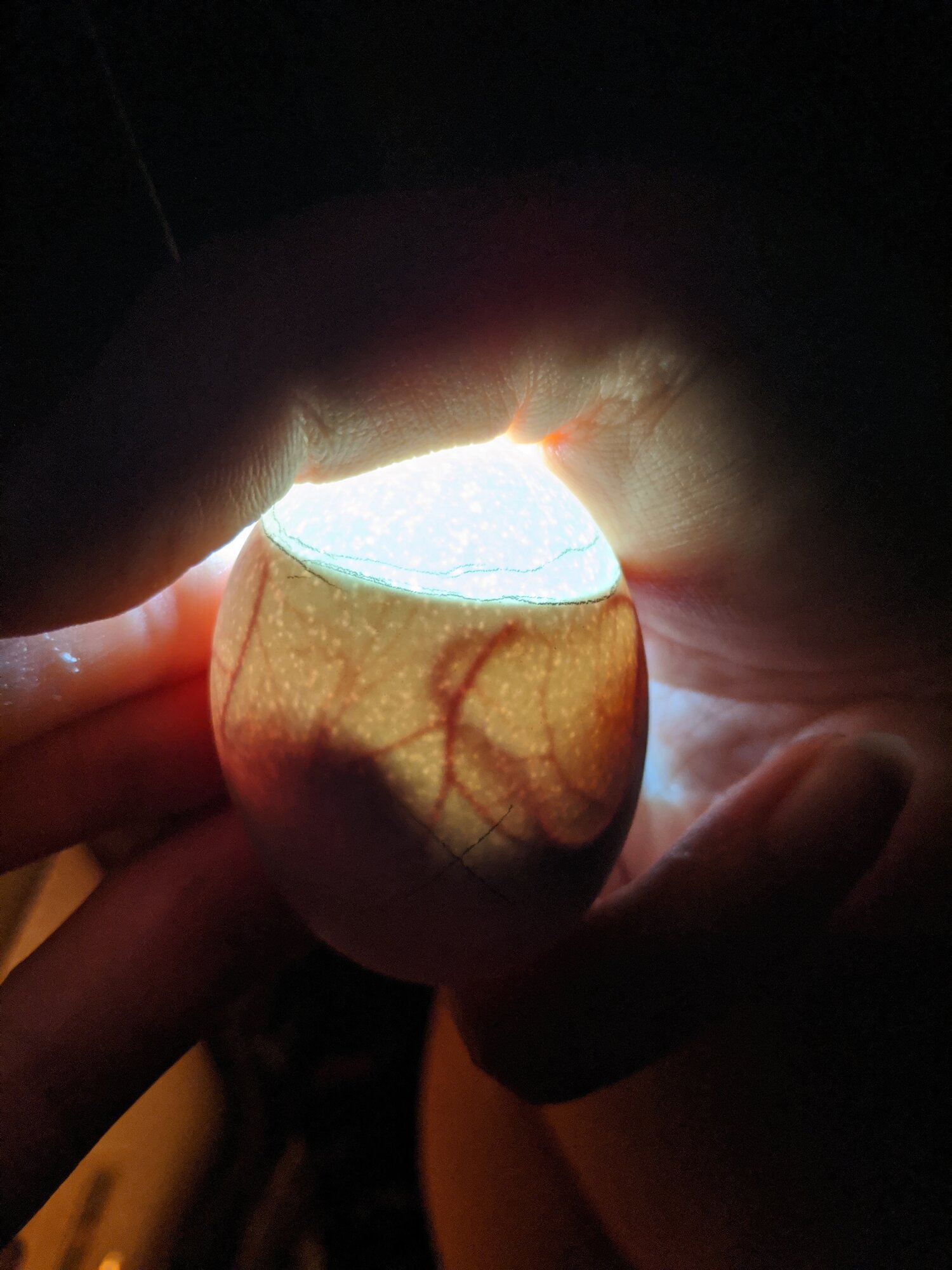 Wow they are awesome. Good job. I'm sure you'll get a good hatch. Thanks for sharing 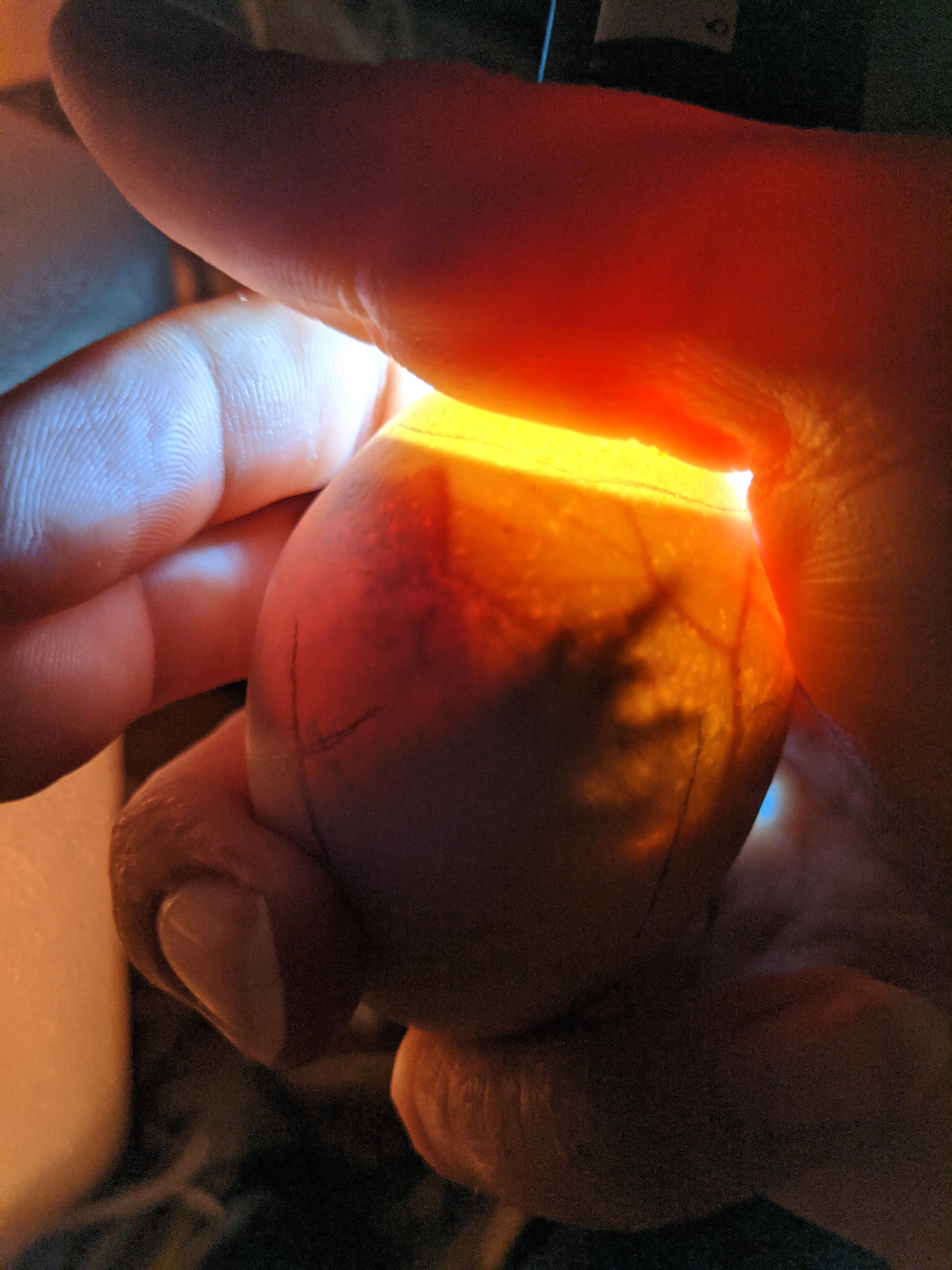 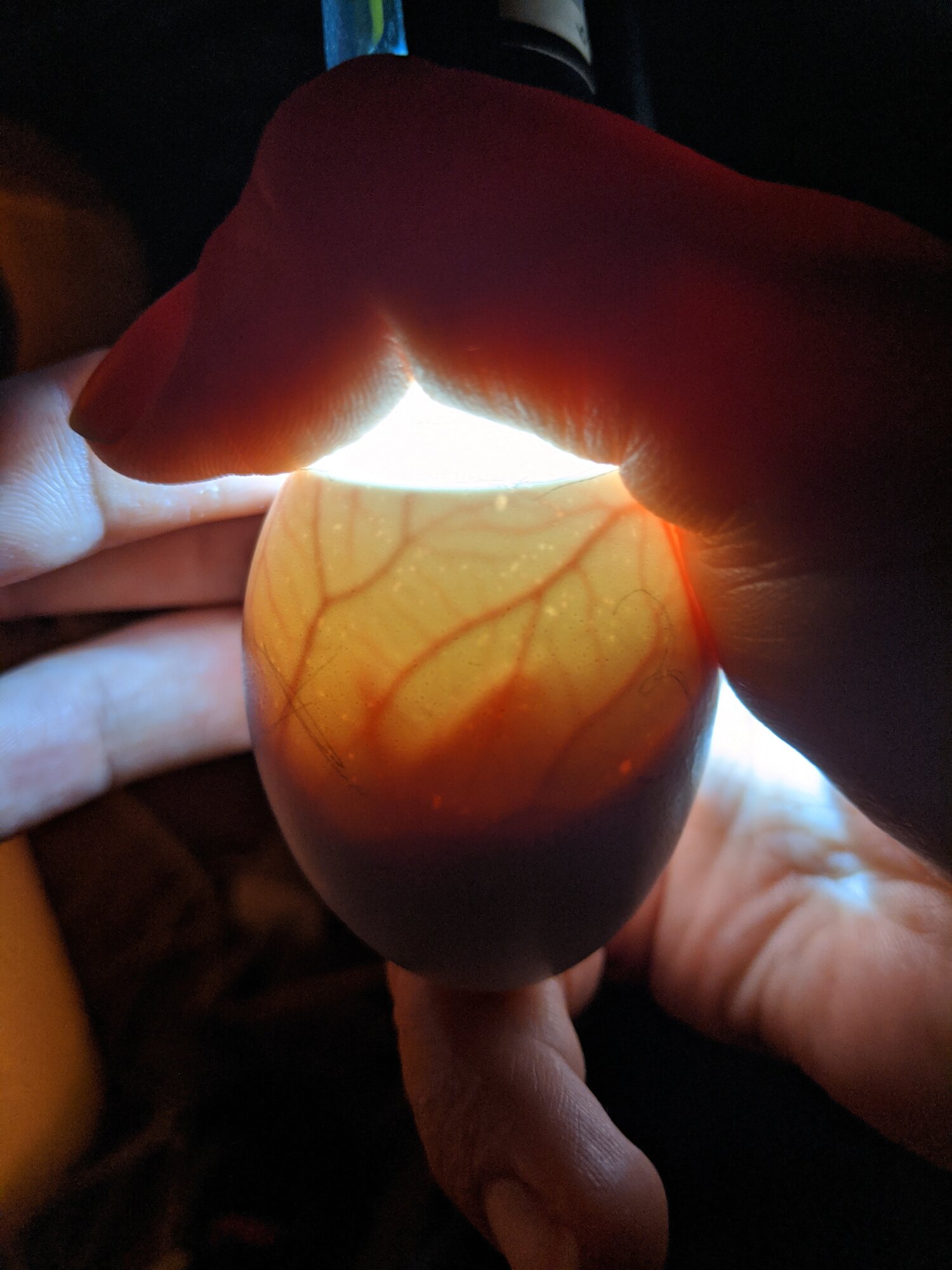 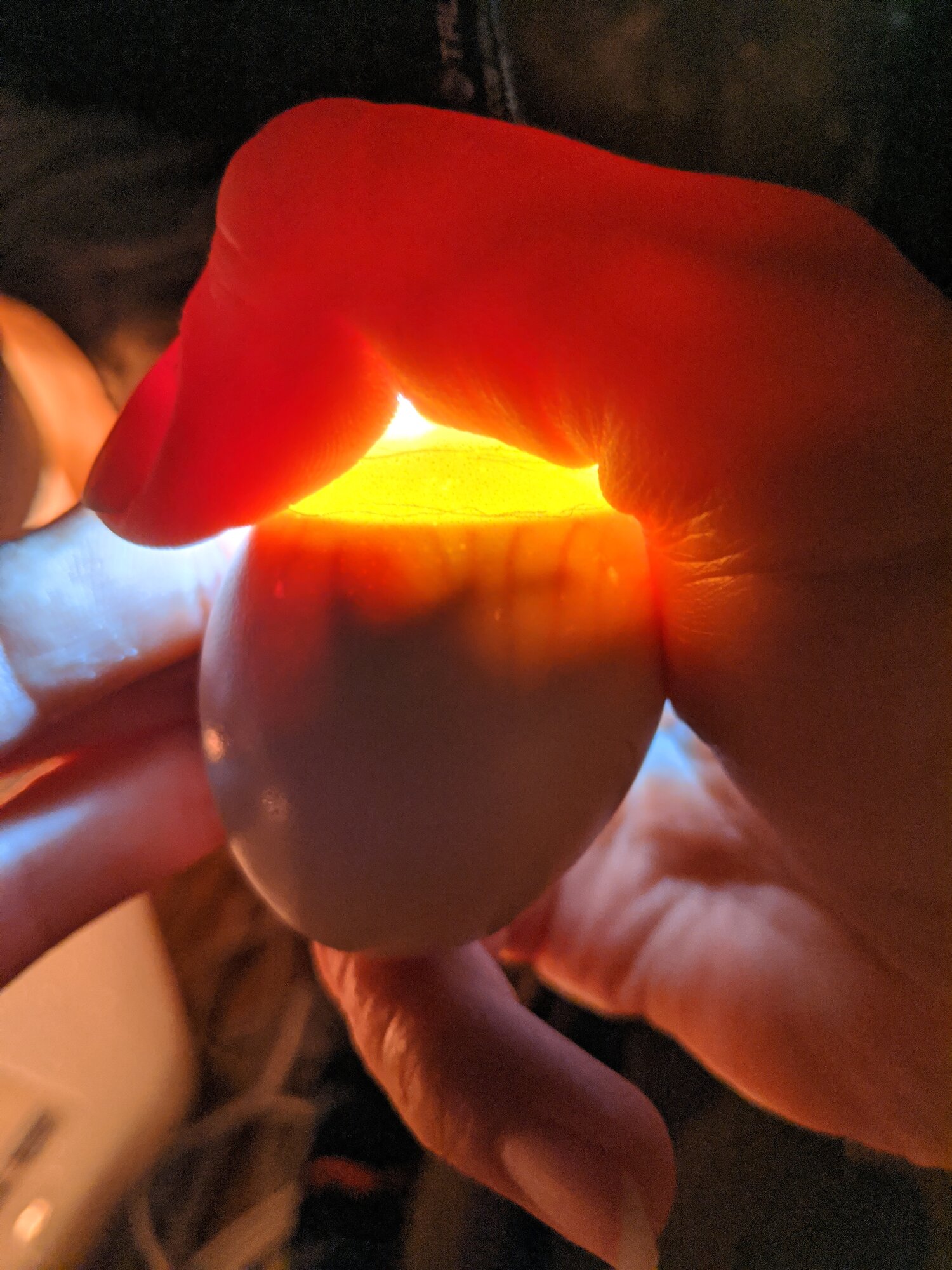 It was really hard not to candle them all again, I just did a few and they all had feet out! I want to crack it open right now haha and see if I can find any silkies.

that top one is both feet, even tho it's one of my smaller eggs it doesn't look like it got silkie toes. 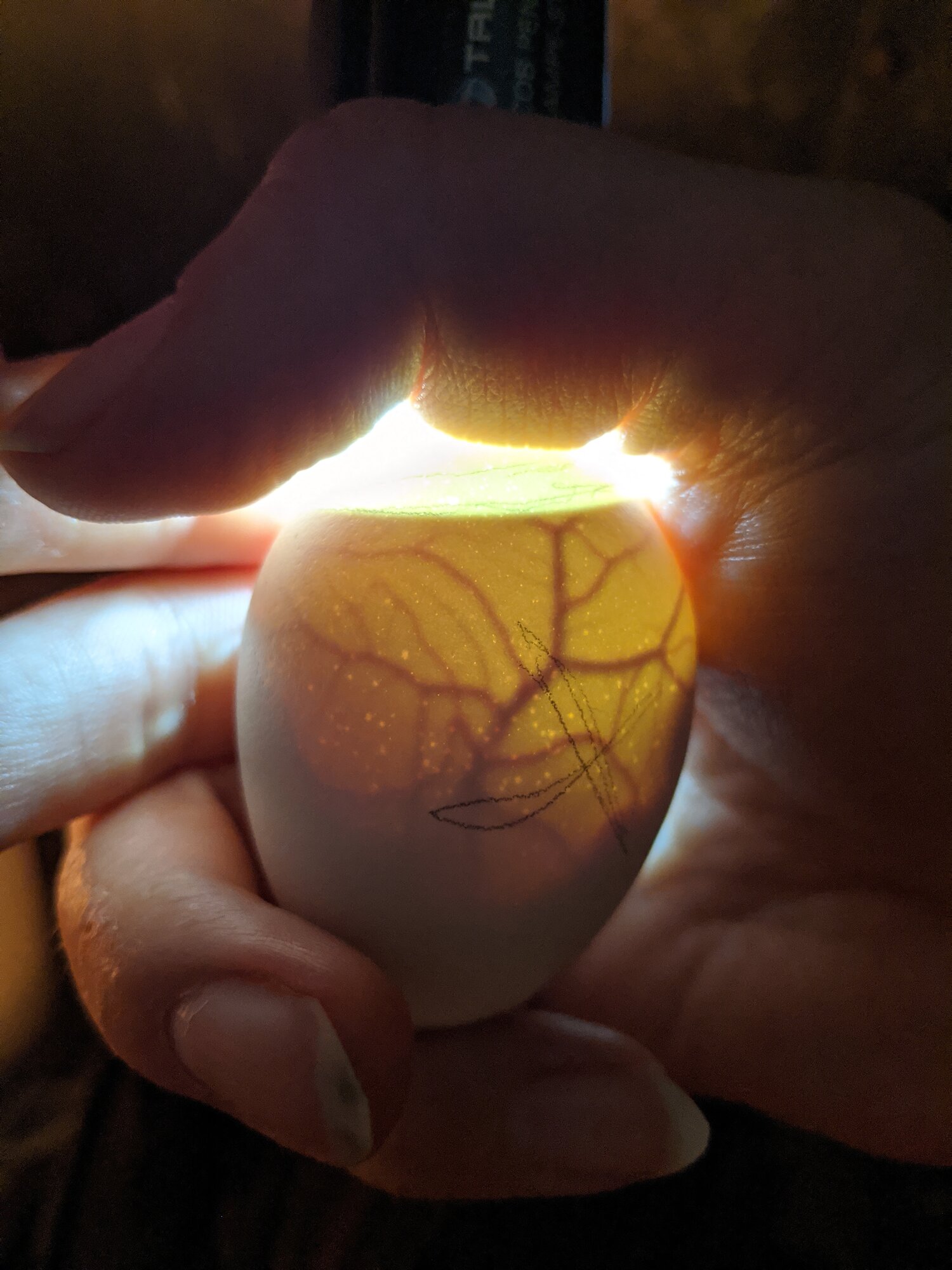 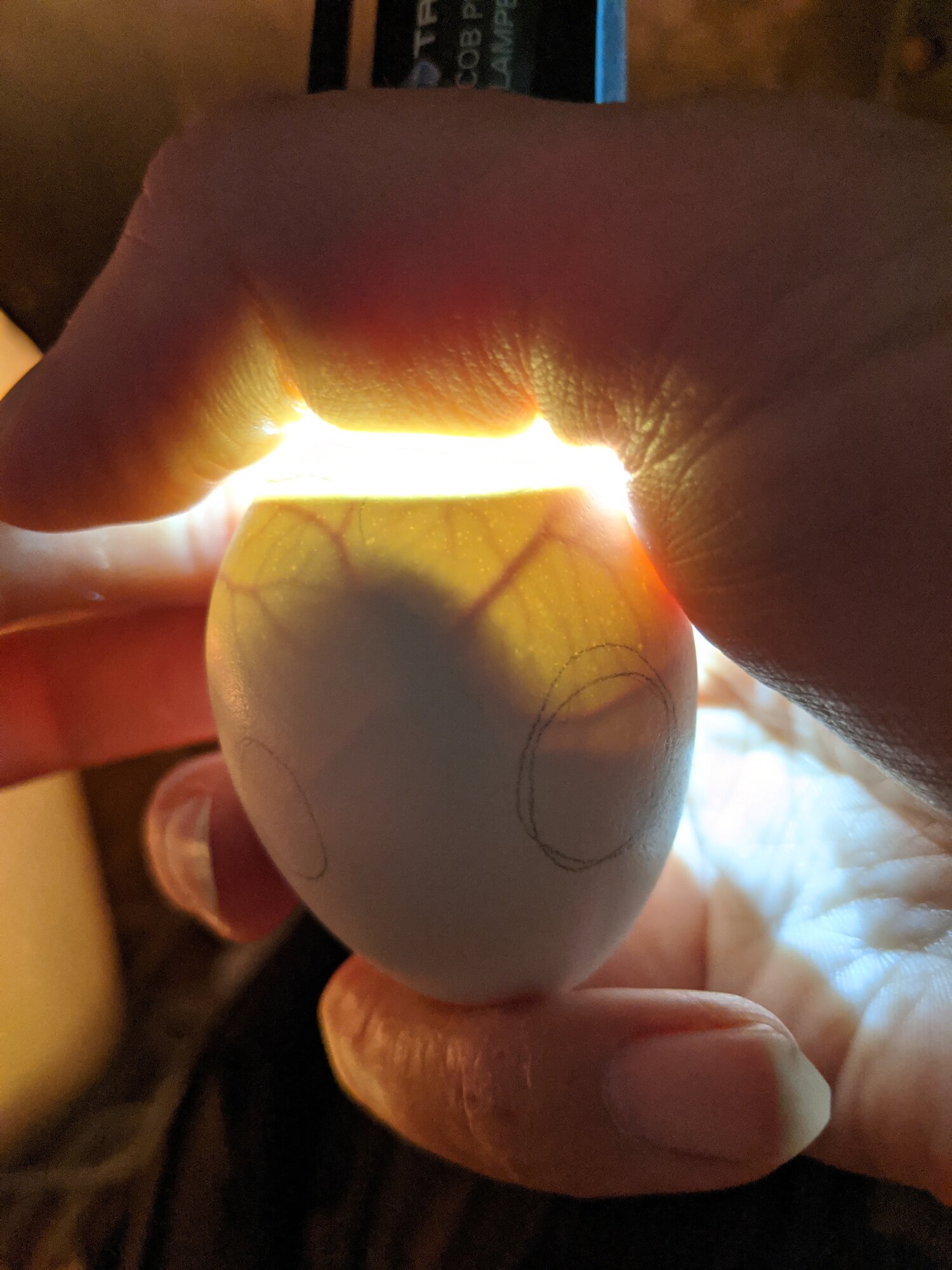 Others are almost totally opaque 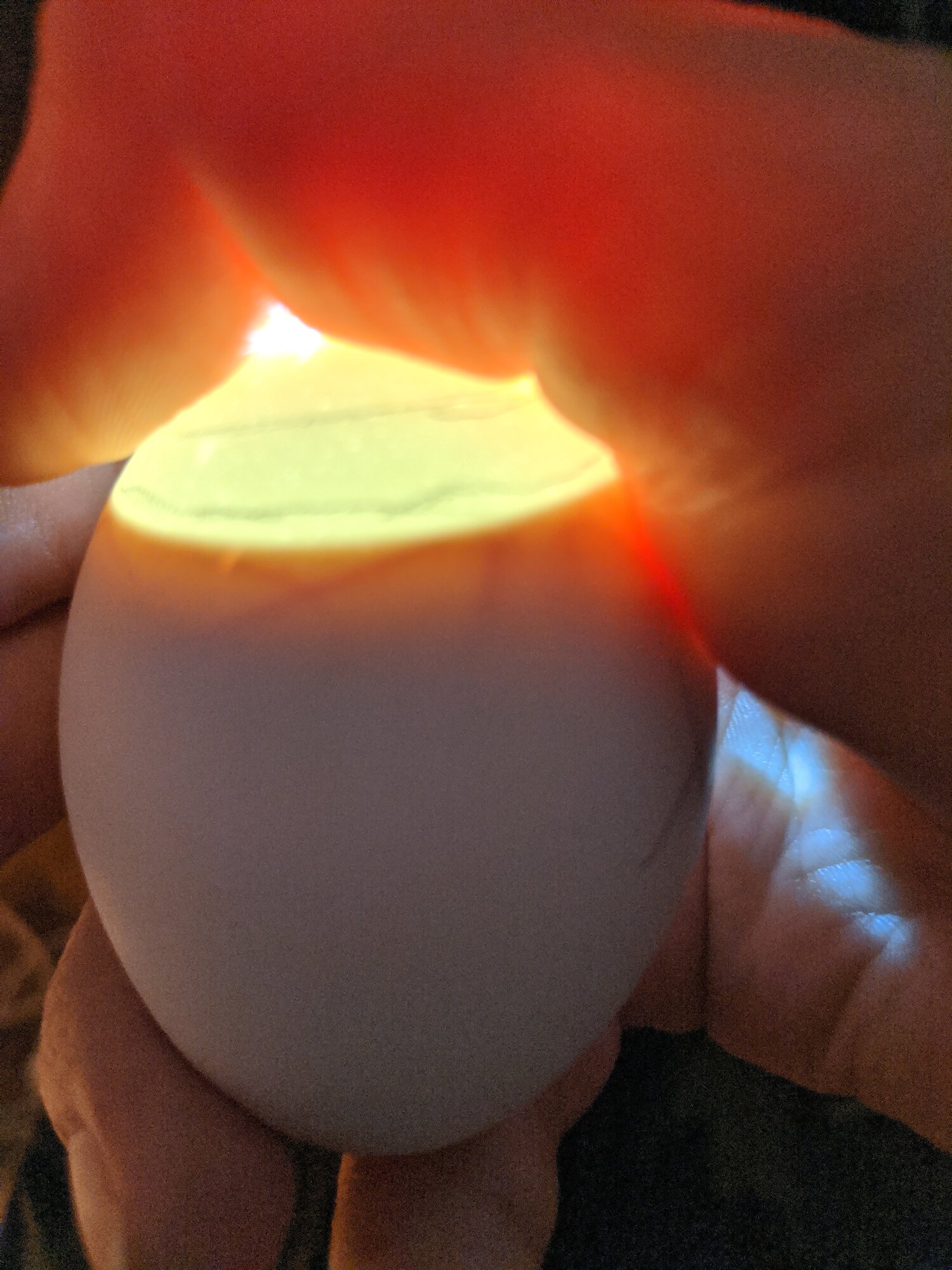 This one has always been hard to see through, so hopefully the difference is more about the shell than what's going on inside.
They're re starting to fill up in the pointy end now too. And it's nice to see a bit of air cell progress.
There's one egg that's worrying me, but I can't put my finger on what's different about it. It doesn't look like any quitter I've seen pictures of, tho it does seem murkier somehow. But the veins look good and it seems to have movement. I guess we'll see, I hope it make it. 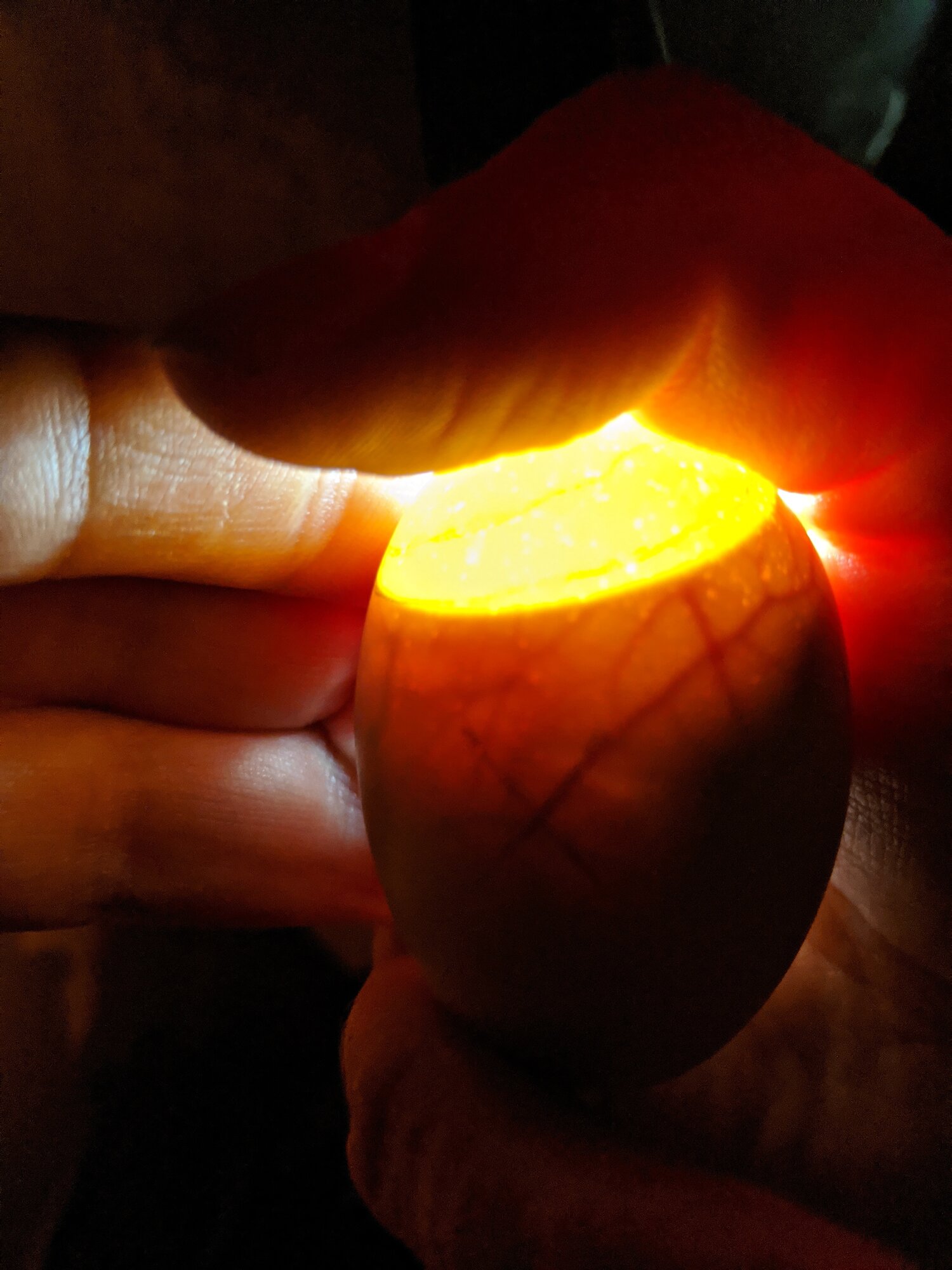 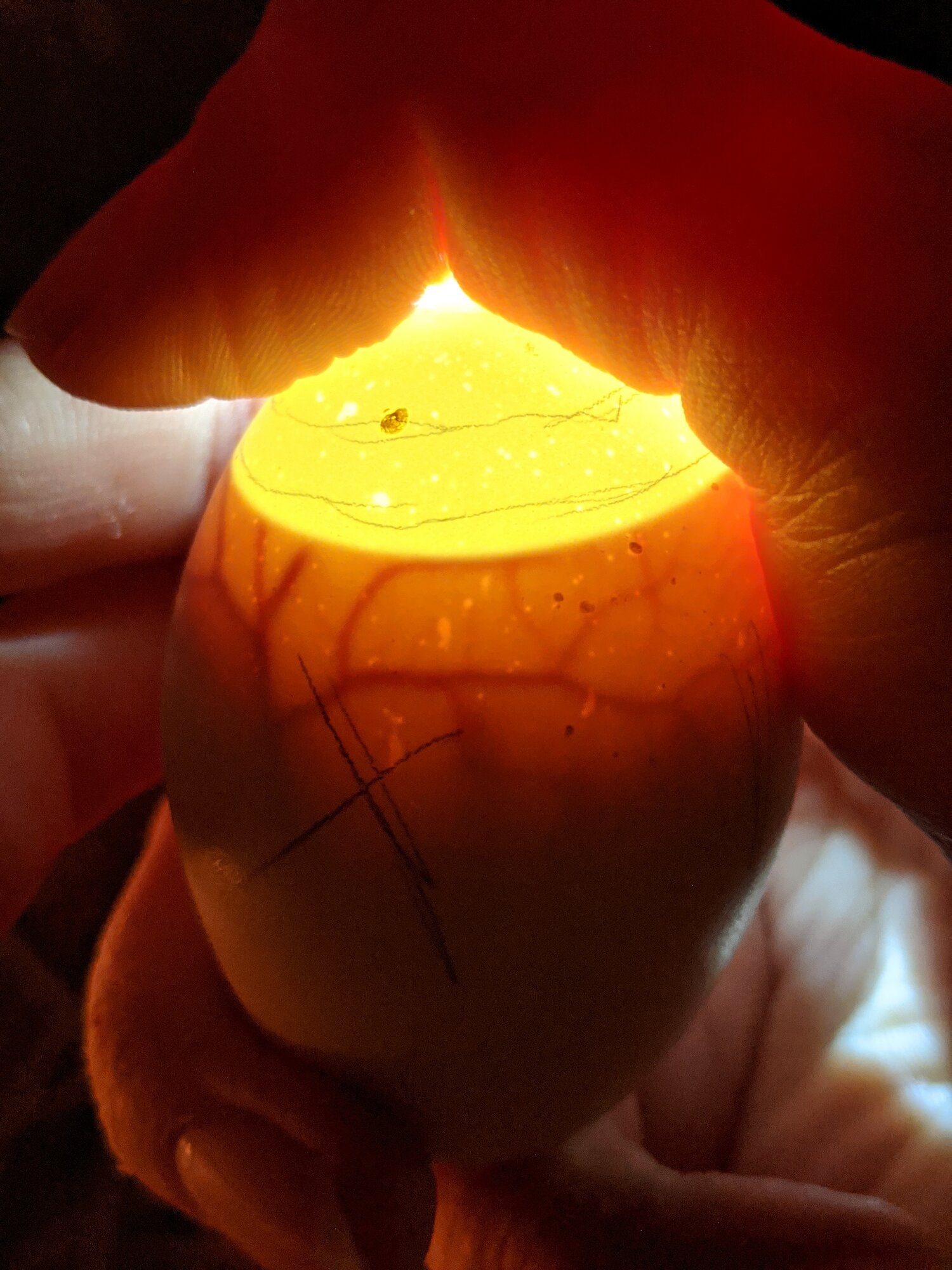 Everything's getting full, and all the air cells seem down from yesterday. Feels like they're on track. I've been incubating basically dry, whenever the humidity gets down to 20% I pour some water on the sand I have in the bottom of the incubator, or put a cup with a bit of water in. Bumps it up to 35-ish and then it takes a few days to fall back down. For lockdown I'll put some trays of water under my hardware cloth holding the eggs. I was able to raise my humidity pretty easily in testing.

Do freshly laid eggs develop faster than eggs laid a week or more ago?