I bred something similar to that a few years back from a mixed flock... 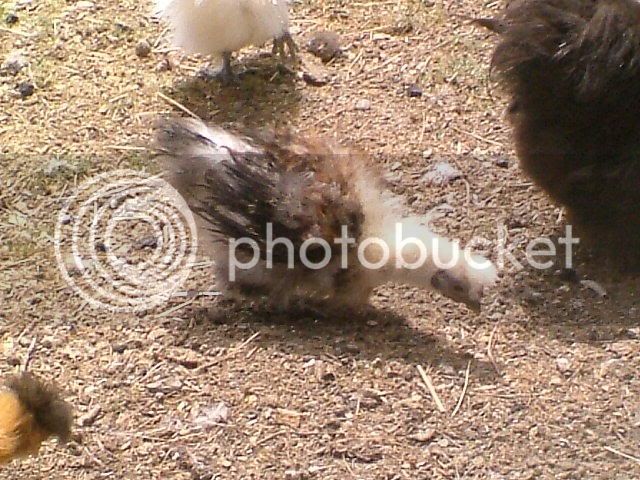 I to would love to know what colors to breed to get calico, I saw some on the Internet and absolutely have to have some. 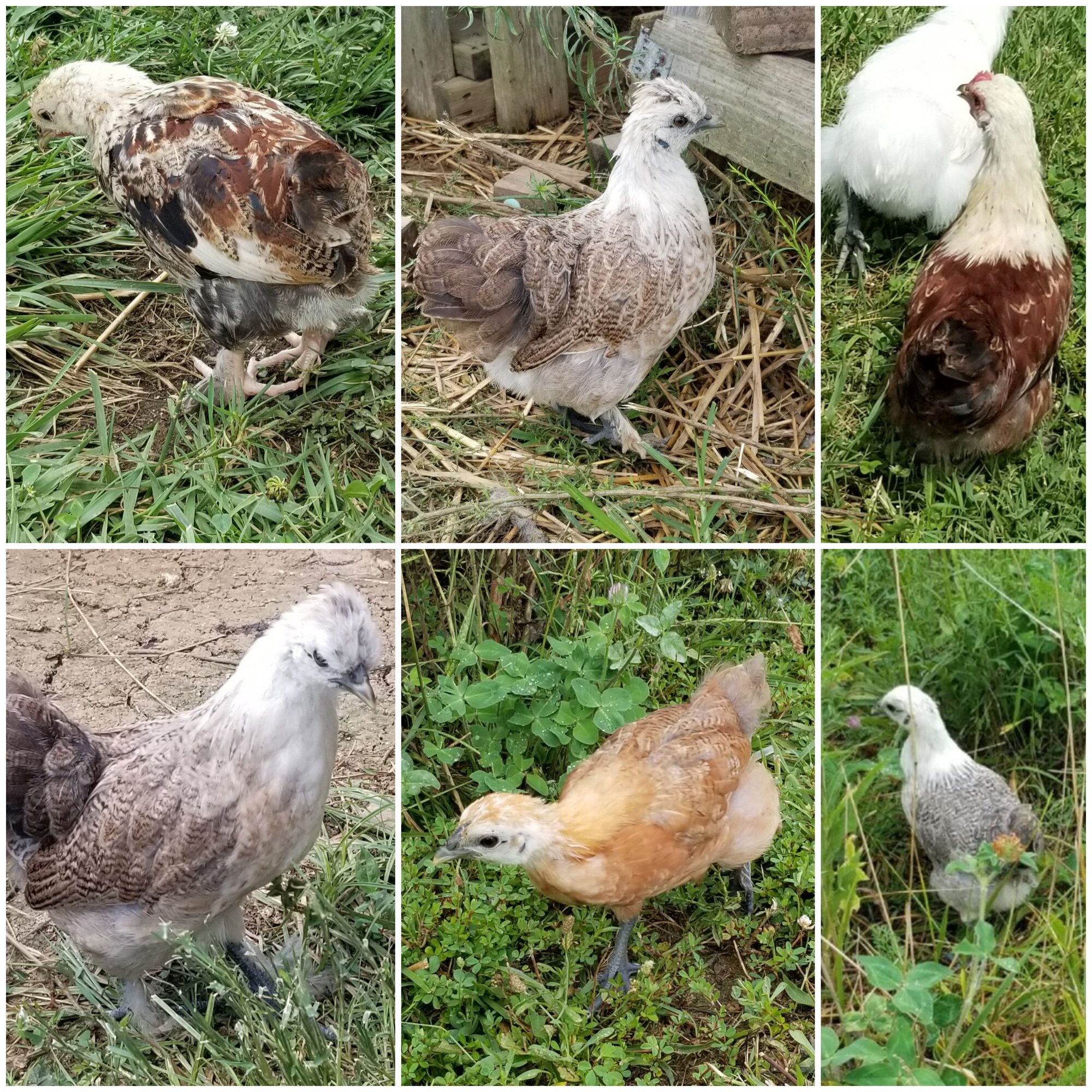 
Cavemansgal said:
I to would love to know what colors to breed to get calico, I saw some on the Internet and absolutely have to have some.
Click to expand...

This is the result I got with a white silkie, over a mille fluer duccle hen.

That is a pretty bird I have a porcelain duccle I wonder what I would get out of that. Doubt I will find out my silkie is the roo lol

LittleRaptorFarm said:
That is a pretty bird I have a porcelain duccle I wonder what I would get out of that. Doubt I will find out my silkie is the roo lol
Click to expand...

I can't wait to see him mature. His saddles feathers are coming in a light tan.

Edited to add I just realized how old the first post was oops! I guess the original poster probably isn't looking for this information anymore but to anyone new reading the thread who is interested maybe it'll be somewhat useful.

I've currently got a little cockerel that is somewhat similar to the rooster in the video (albeit darker and with a bit less red). It looks to me like the rooster in the video may be a gray (or silver partridge although he could also be golden partridge) with red leakage. It's hard to say though but the colors and the way the pattern is coming through very much reminds me of a light gray rooster with quite a lot of red leakage. Though it's not a recognized color I've seen the grays with red being referred to as tortoiseshell.

Here is my boy Jasper. 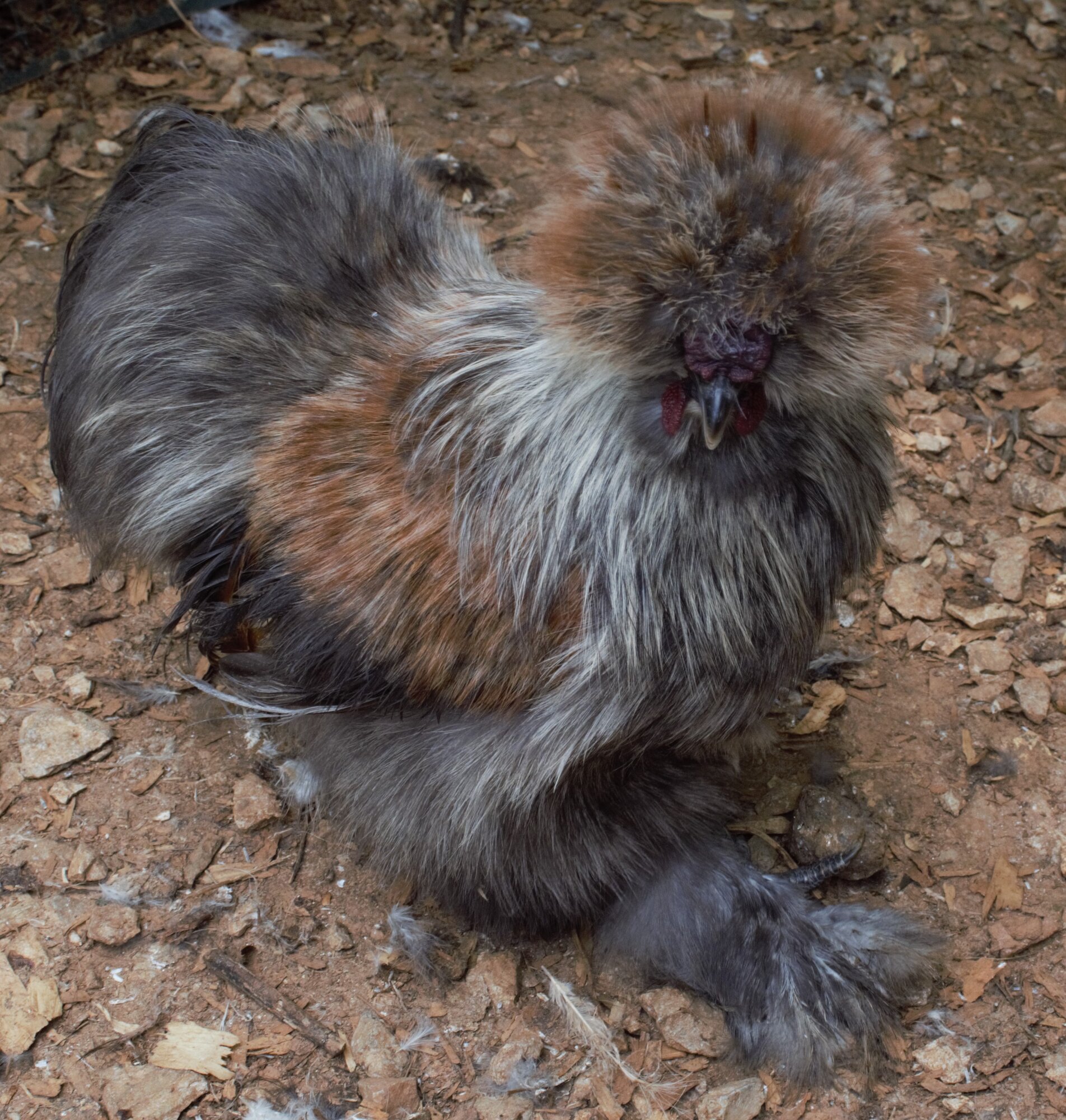 I wasn't the one who bred him so I can't say exactly what his parents were but I got him from paint eggs where the breeder thought perhaps someone was jumping the fence and mixing with the paints. The breeder bred red pyle silkies as well (or as close to red pyle as you can get with silkies) and I'm guessing this boy is a cross of a red partridge/red pyle and a paint (who to get the partridge pattern had to have been carrying a recessive partridge gene). I also think blue was involved with my boy but the blue isn't something that would be needed if trying to reproduce the color of the cock in the video).

I'm no expert by any means but if I was trying to reproduce the color seen in the video I'd want to get a couple gray cockerels/cocks that are on the lighter side and some red partridge hens(not super easy to find red partridge as it isn't a recognized color like grays are, I'd look for red pyle silkies to try to get a hold of the red partridge since you need red partridge to make the pyles). The red partridge are gold based and the grays silver based. I'd have to breed towards silver ground color . With the gray cocks being the fathers all the female offspring should be silver based (since they only inherit one copy of silver or gold based on what dad is) and the male offspring golden (meaning one copy of silver and one of gold since they will get one ground color gene from dad and one from mom). I'd then cross the offspring (making sure they are unrelated hence why I'd want at least a couple gray cocks to start with). Crossing the offspring you'd get both gold and silver based females and you'd get golden and silver males. The silver based ones are the ones I'd want to work with from this point on (If I kept on working with golden and gold I would end up producing red partridge as well as the tortoiseshells). I'm not sure how much the red would come through in just the first crossing of red partridge to gray but judging by how my boy Jasper came about it seems like you can get a decent amount of red in just the first crossing. If there wasn't enough red I'd have to consider crossing some of the male offspring back to the red partridge to try for more red.

If I did this I do believe I should be able to get roosters that are a similar color to the one in the video in not too many generations. I do not know how the hens would look in this cross. Most likely they wouldn't have nearly as much red and it would be in different areas (probably a little on the breast at the very least but someone with more genetic knowledge would be able to answer better).


I hope that was somewhat understandable, I'm not sure I'm great at trying to explain though and I could be totally off base on what color that rooster in the video actually is. Also take what I say with a grain of salt, I'm still learning about genetics and some of my understanding of certain things could be wrong.