View attachment 1881672 Can anyone tell me if this is a male or female? 3 and half week old valley quail.

What is that? Someone that knows quail?

For gambel quail, you can tell when they grow new feathers on their heads. The males will have black faces with a white stripe and the females will have gray with a brown stripe by their eyes. I could tell most of my quail were male by around 5-6 weeks. The female took a little longer to know for sure, since her new colors weren't as distinct as the male colors.

California quail look similar to gambel. You should be able to tell in a few weeks. Your quail still looks pretty young. Do you just have the one?

These are my boys at around 8-9 weeks old. 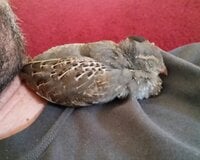 This is my female, Pedro.

Thank you for responding. Looks like I’ll have wait 2-3 more weeks.

Yes, only. We hatched two but unfortunately one of them didn’t make it.
M

This is adorable. Do they live indoors, and are they really tame enough to sit on your shoulder? I'm jealous! How do you do it? We love ours so much (about 3 months old now), but they do not tolerate bring touched and most will run away if we approach. The tamest likes to hang out with us and begs for treats, sometimes hops into our lap, and lets us very lightly stroke his sides while he eats. It was our first time hatching quail, and we couldn't find good info on taming them as pets. We love spending time with them but wish they liked us better.

(Sorry to go off topic)

I never planned on having quail. Their nest was right outside my office window at home, so I watched the female sit on her eggs everyday for two weeks. Then one day she was gone. So I put the eggs in a shoe box under a lamp at 100 degrees. Ten days later I had seven of the most adorable little creatures I've ever seen.

I tried to keep the quail wild so I could release them when they were big enough, but all of them are pretty tame. They like to sit on our shoulders, head, lap, feet. Now that they are older (12 weeks), they don't like to be held or pet as much, but they still like to sit on us.

Pedro lives indoors with me. She was born with some health problems, so I've had to keep her separate. She is significantly smaller than the others. She and I are pretty close. She stays near me when I'm home and calls if she can't see me. She goes in her pen when I'm not home.

The boys have lived in and outdoors. It is very hot where I live, so I moved them outside at 2 weeks old where it was 95 during the day and 75 at night. (They were cold in the house.) I moved them back inside at 7 weeks old, when that picture above was taken. Then I released them two weeks ago at my parent's house. (They live in a retirement community with lots of quail.) So now they hang out in their yard and sleep in their porch. My parents keep food and water out for them and protect them from the other birds. Right now the other quail are mean to them, but I'm hoping when winter comes around they will be able to join a covey. I thought when we released them they would run off and we'd never see them again, but they never go very far. I can go visit them anytime. And they still love sitting on us!

I'm not sure what we did to tame them. We did hold them a lot when they were little. They were always so cold! I could fit all of them in my hands. If I cup my hand they would all crawl in and fight to be in the middle. So cute! They were still doing that up to when I released them, but only one half of one fit in my hand by then.

I will most likely keep Pedro for a pet, unless she gets to be full size and wants to be set free.

What kind of quail do you have? Do they live inside? How many males / females?
M

We have California Valley quail, 5 female, 7 male. We hatched them in an incubator, and they lived in our bedroom for the first 2 months or so until we finished their outdoor aviary. We had never incubated before and read that hatch rate would probably be low, so we hadn't expected to have so many--it quickly became clear the little coop we'd prepared would be much too small for them. Now they live outside.

We never held them much, which is probably why they never tolerated it. I tried a few times, but I could feel the little bodies buzzing in fear and didn't want to risk their health. Once they crowded under our hands like you described, which was incredibly adorable, but I thought they'd be warmer/safer under their heating plate and showed them back there, and they didn't try to climb into our hands again after that.
We hand fed them, though, and coaxed them into our lap. Most of them are a bit shier now living outside but will eventually come up and hand feed if we sit out a while. One comes up immediately and another tends to come pretty quickly; they were like that as chicks, also. I think the friendliest may have been the first to hatch and imprinted on us. 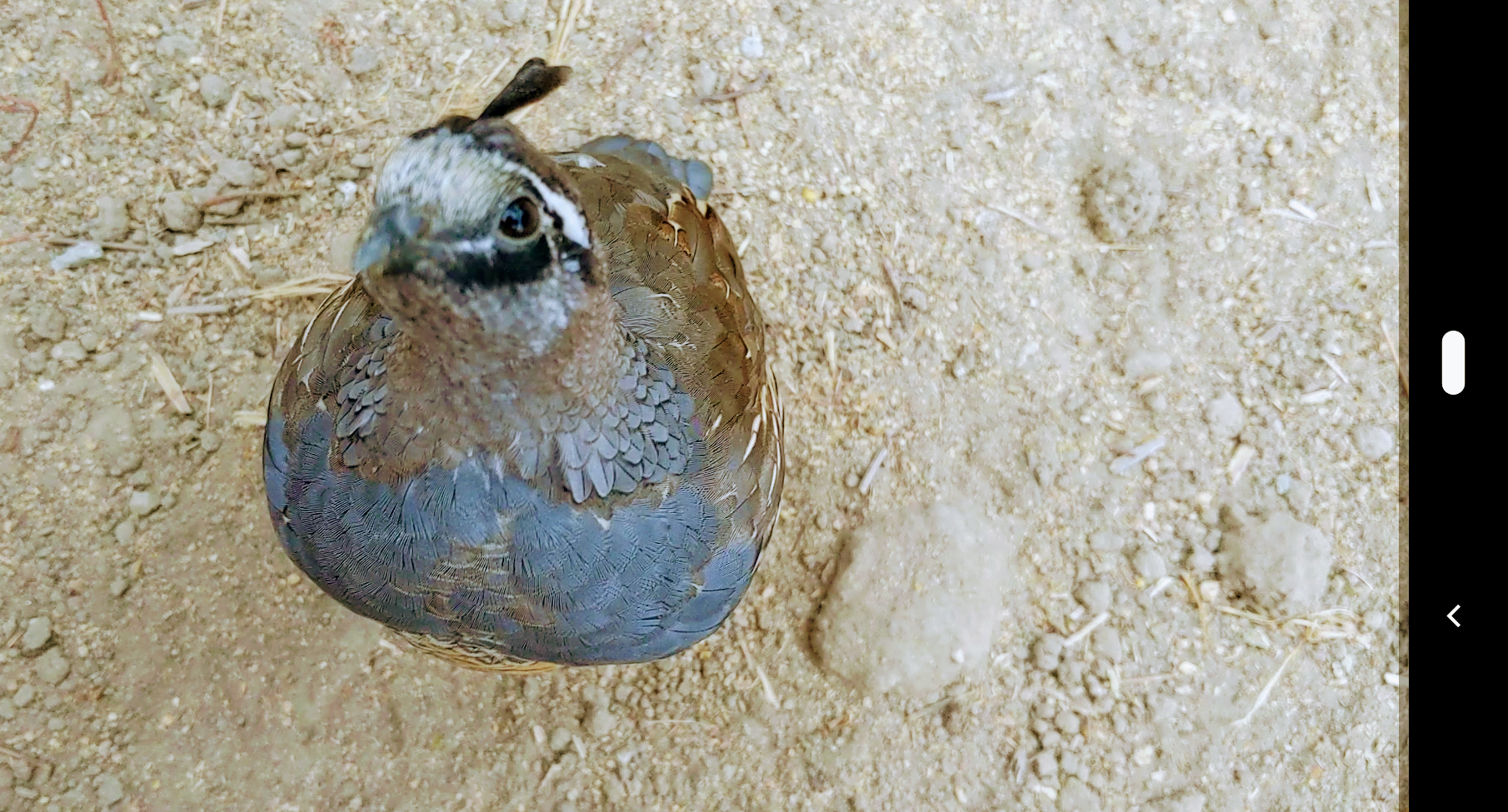 Here he is asking if we brought any special treats.

So that's the difference! I don't have an incubator or a heat lamp. The quail lived in a tub with a regular lamp for the first two weeks while we built them a pen. 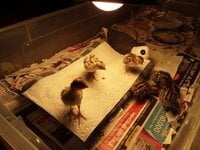 I had to hold Pedro to keep her warm her entire first day because I only had one lamp. She was born with an umbilical hernia and the other quail were hurting her. I think that's why she bonded with me. For overnight I put a 18 hour hot pad (for camping) in her box. The next morning I found her under the blanket laying directly on the hot pad. It was so cute! I got her a lamp the next day.

None of the quail slept well at night bc of the light. I think they liked crawling into our hands bc it was warm and dark and they could sleep better. I didn't get much sleep those first two weeks either... the only time they were quiet was when we were holding them. The reason I moved them outside so early was bc it was warmer out there and they could sleep in the dark without freezing. Pedro got a rice bag, fleece blanket, and shoe box for night. Her pen was ready by week 4, but it's in the kitchen.

Your boy is so adorable! I'm surprised you kept so many in the house until 2 months! I bet they were pretty big by then. My boys were huge by 6 weeks. Pedro is still very small, though. I don't know if she will ever be full size. 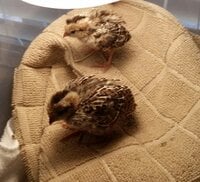 This was the size difference at 10 days old.

Anyway, thanks for sharing! I've been wondering why the boys were so attached to us.

B
Questions on quail
2

Can I keep two male valley quail together if there aren’t any females in the pen?