Hello, I hoping you can help me and my special needs chicken Dolly. A few months ago my vet gave me some ear medication after I sent him some photos of both ears having discharge and crust around canal opening. The ointment he gave was applied daily for several days and her head shaking and discharge cleared up. About a Week ago she started showing the same signs of discomfort and after a call to the vet I was told to reapply the medication as I had some previously. This time instead of being cooperative she was very combative and she shook her head immediately after application of medication into her ears. After struggling and head shaking more medicine was around her ear then in it and her feathers were greasy from the ointment. I used a kleenex to remove extra medication from her feathers and applied it again the next day. Last night would have been 3 consequtive days but I decided against it when I discovered the irritation around and inside her ear. It looks like a chemical burn and it is very red and has a hard dry crust on it. Her ear canal also looks red and swollen but she isn't making it easy to get a good look at it. My instinct is to apply a clear ointment without Caine based pain meds to keep it soft help sooth it and give her some aspirin for pain. She isn't very active and sits with her head in the corner so I know it's uncomfortable if not painful. She sits in my lap and wants me to slowly rub her head. I thought maybe you someone might have another remedy that might help. I am not sure why the medication caused a reaction the second time course of treatment but there has not been any changes in her routine, feed, bedding any other part of her day today care and nothing else has been applied to her skin or feathers that would explain the reaction. Any thoughts or recommendations would be greatly appreciated. I called the vet who told me to treat the ears again with the same medication and he started his vacation after shift yesterday and the other vets in the clinic won't treat poultry. It was hard to get a good photo of the redness and texture of the area but I did attach a few views of each side to try and accurately show my reason for concern. Also included a photo of the medication that was applied. About the same time she went off feed slightly and her poop has changed in last few days. Possibly more info to solve the puzzle or maybe unrelated but never hurts to have too much information so I have included a poop photo as well. 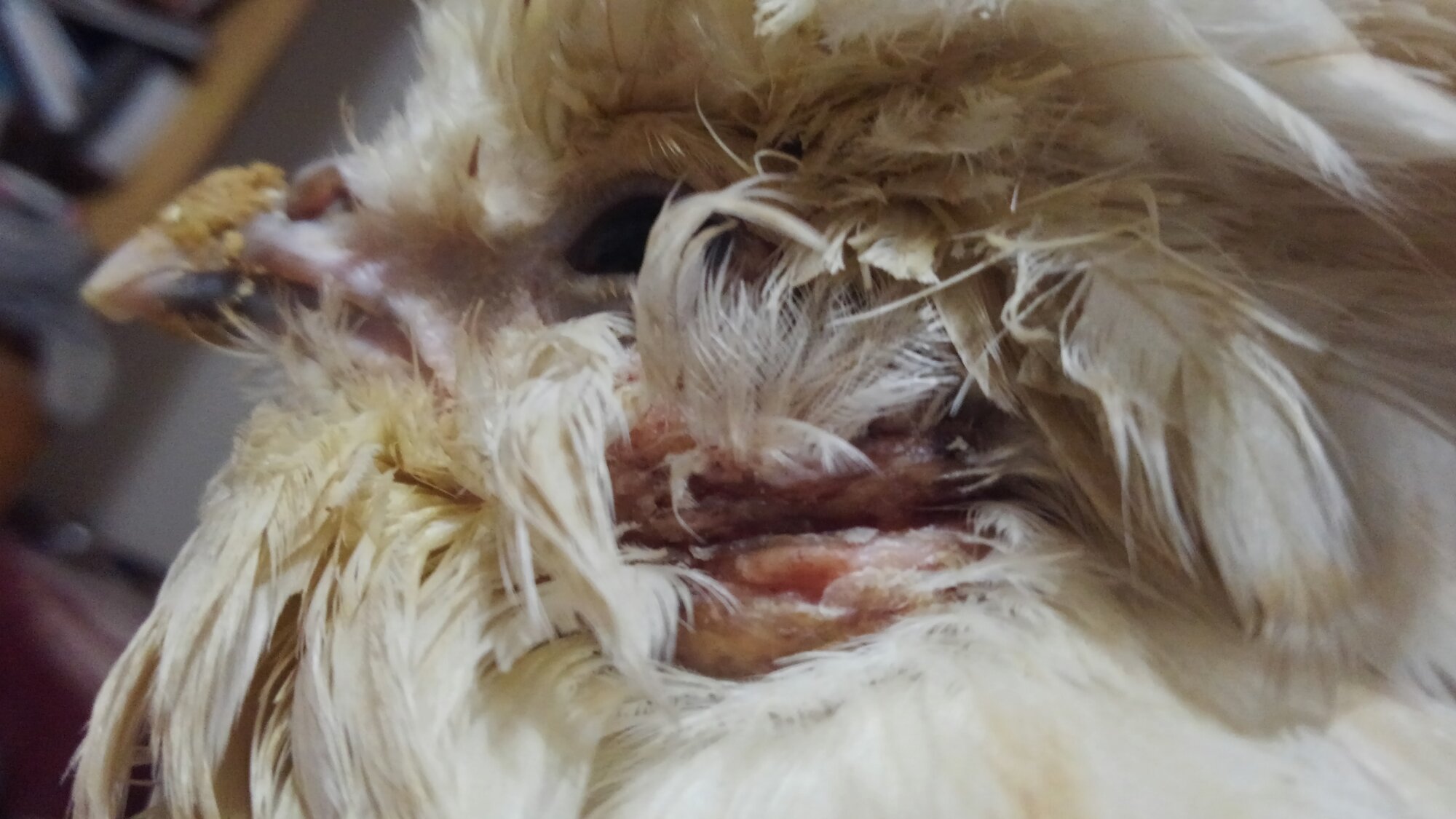 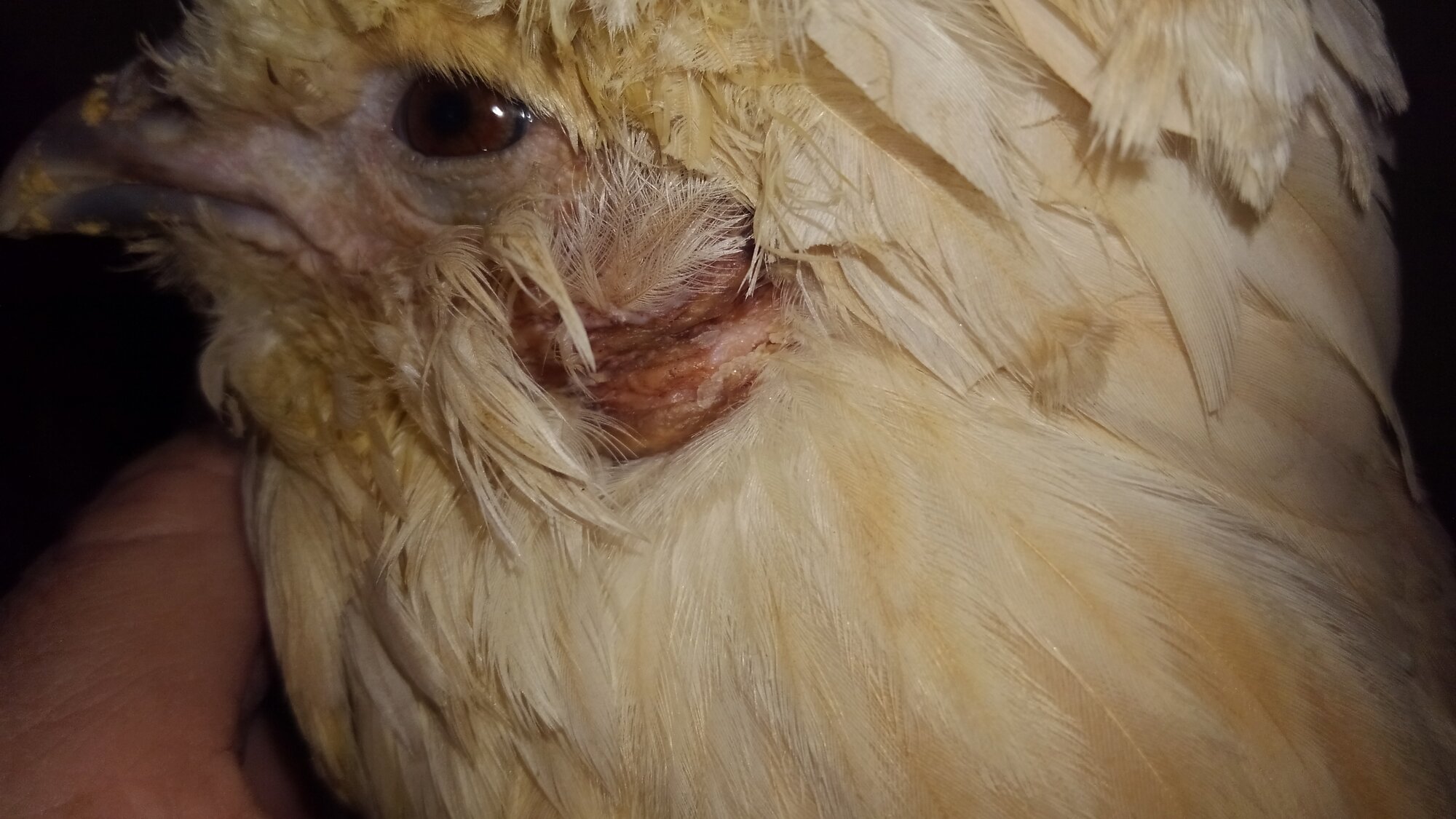 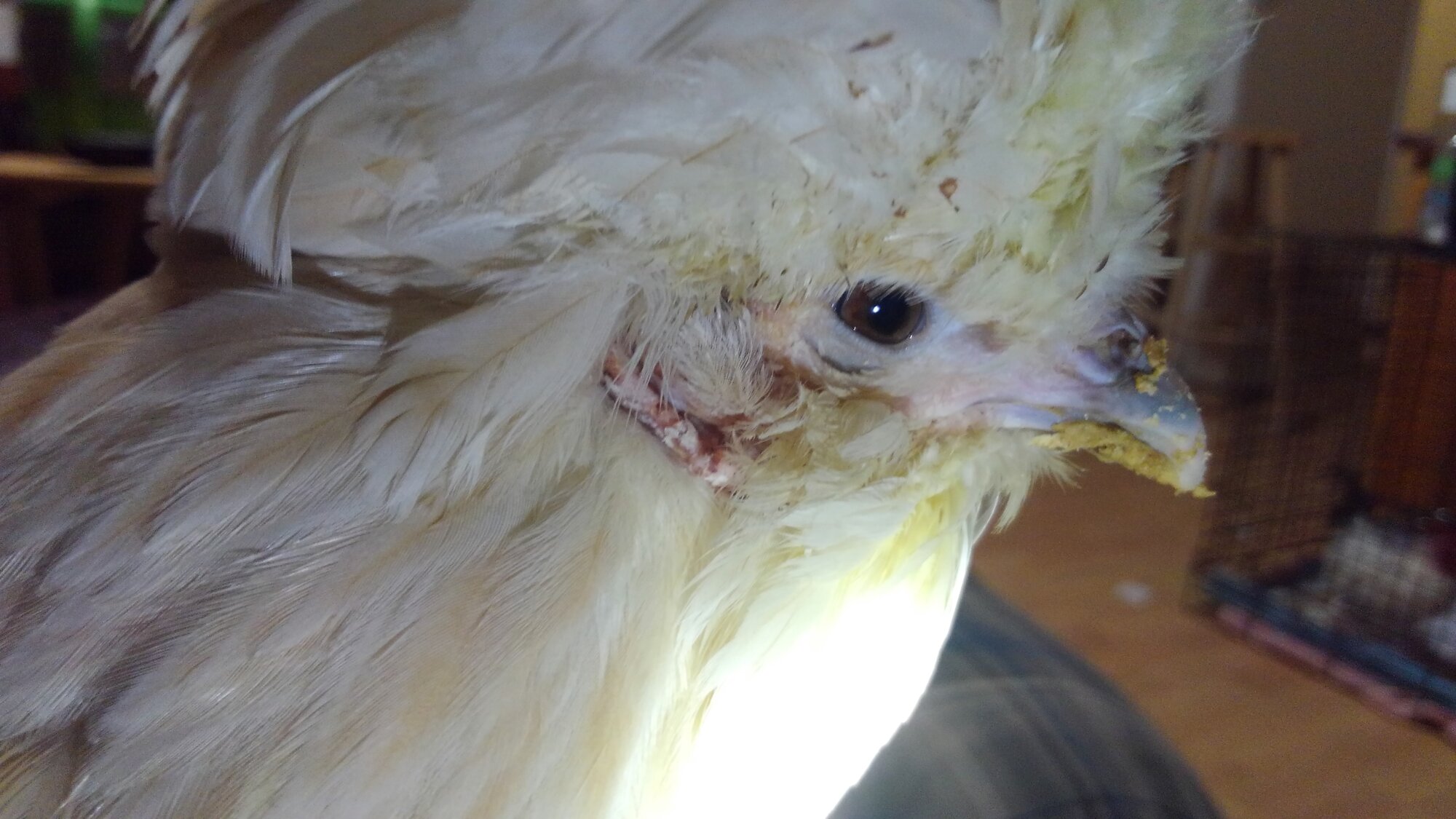 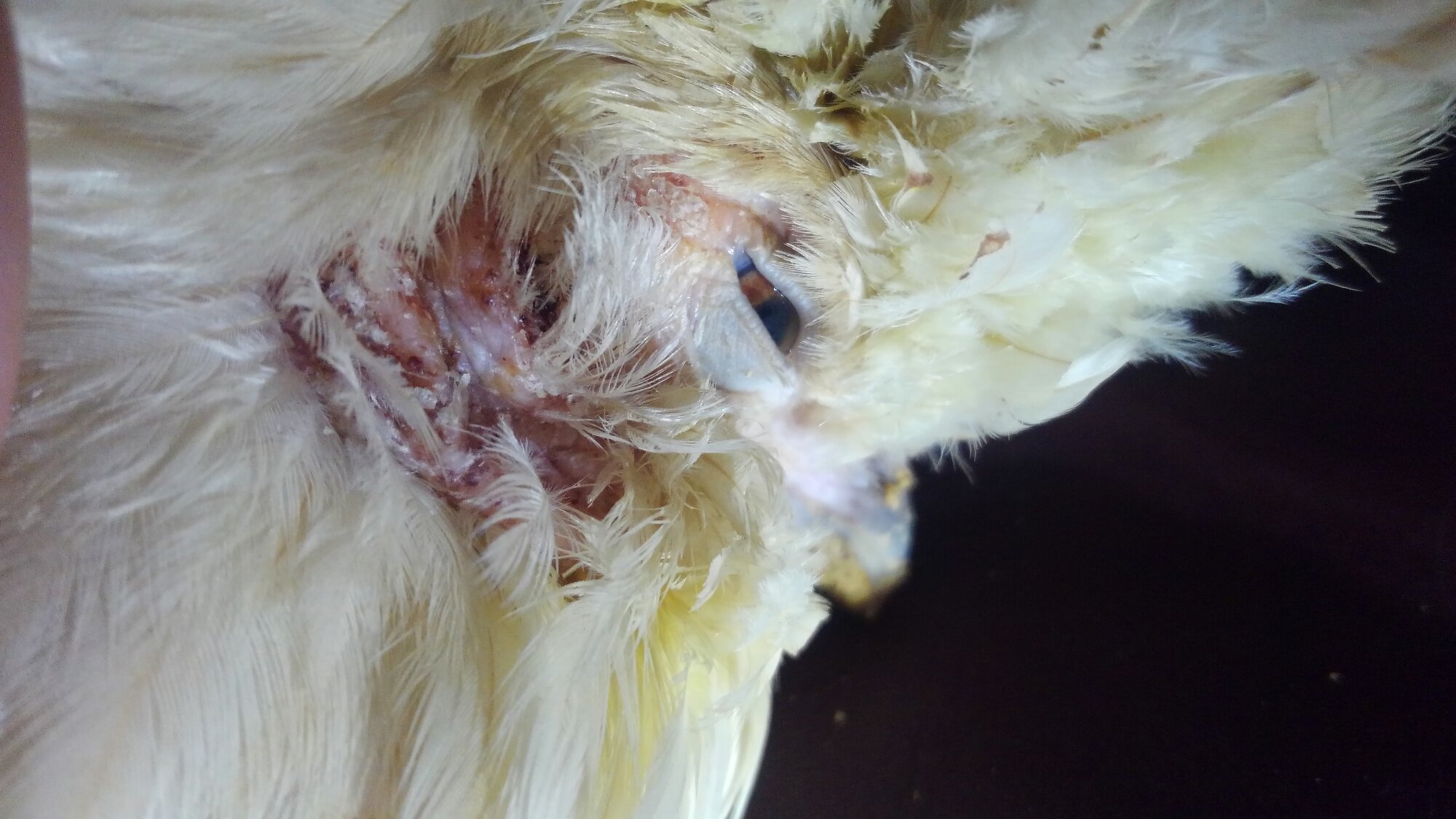 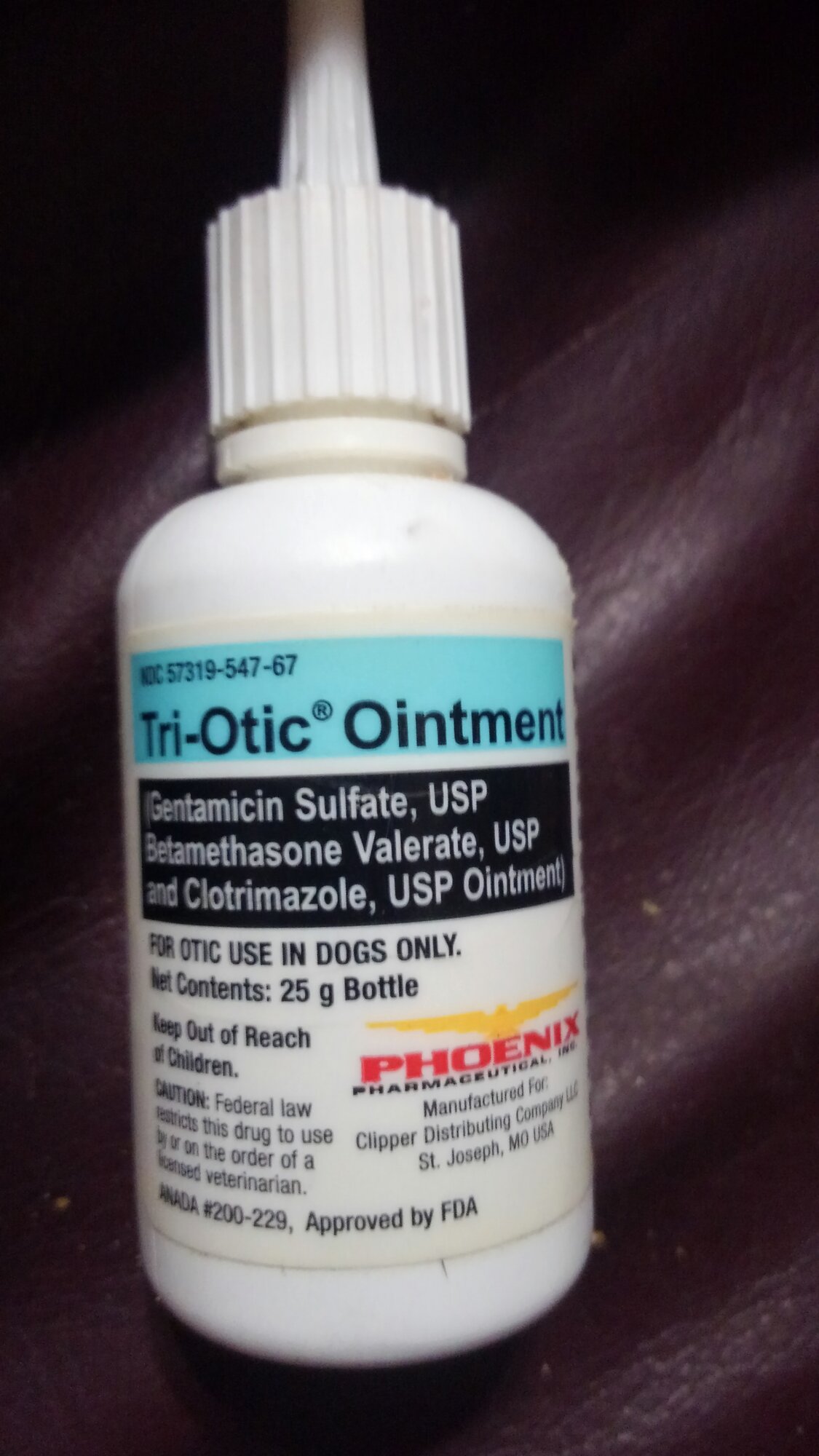 I feel horrible as now I realize she was combative about medication she was previously easy to treat with because it was burning her skin. Thank you for any thoughts you may be able to share 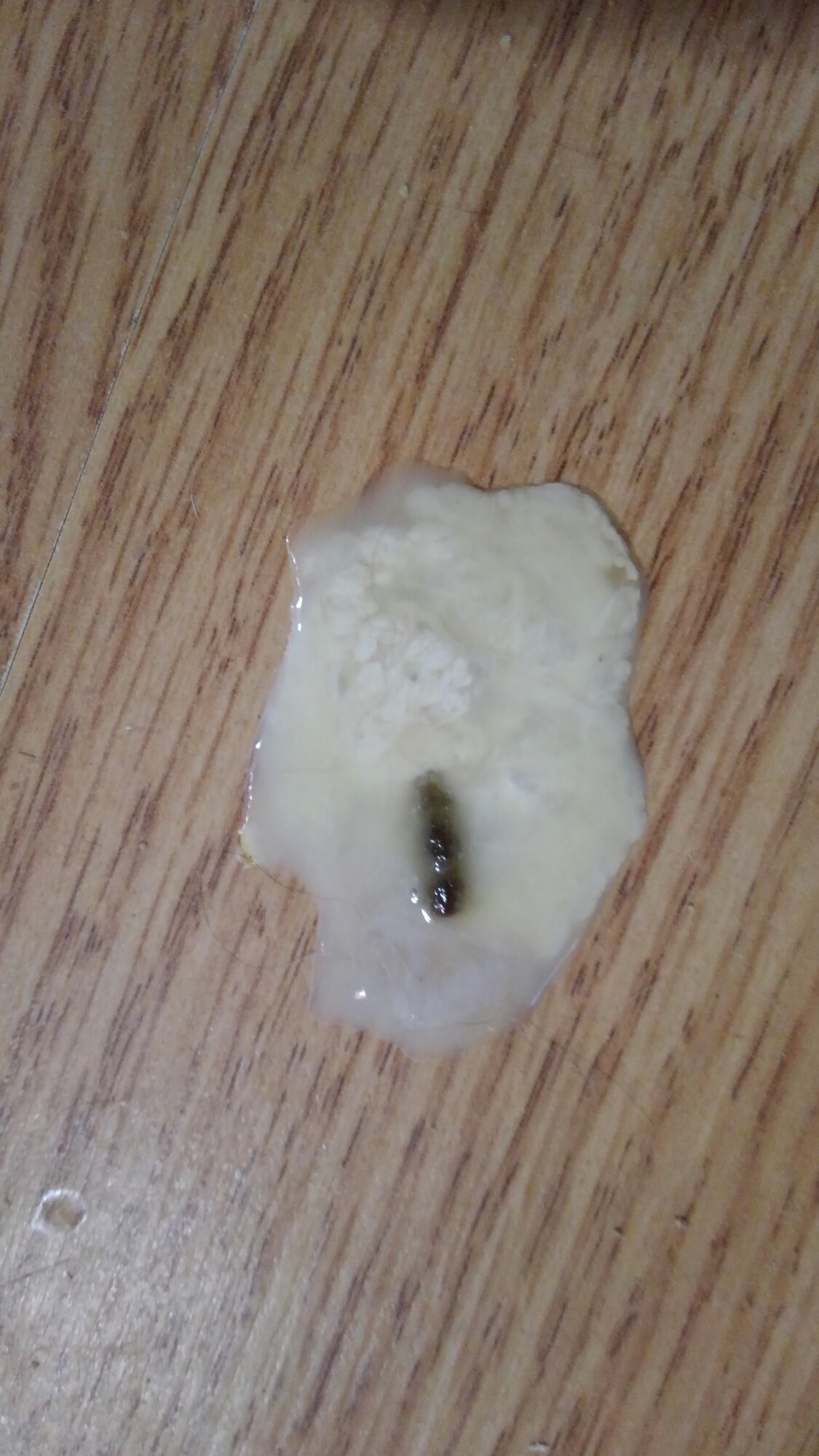 Stop using that medication it's for dogs, the medication should have been diluted for smaller animal/birds. For now just lightly apply neosporin or bag balm with a Q-tip. And let her heal for a week.

Make sure she's drinking and eating regularly. And let her move around to get some exercise.

Just like the warnings for humans, after using a product, a second time can cause reactions

I agree that you need to stop using the Tri-Otic Ointment. Use neosporin instead. However it would be best to wait about 7-10 days before applying the neosporin. This will give time for the sensitive ear tissue to recover and heal from the chemicals in the Tri-Otic ointment.
You must log in or register to reply here.
Share:
Reddit Pinterest Tumblr WhatsApp Email Link