I'm a first timer raising chicks.
I bought 3 Rhode Island Reds from my local feed store 3 weeks ago. A few days after I bought the 3, I went back and got one more (different breed, it's black, IDK what it is) from the same feed store.

About 4 days ago I noticed one of the Reds was acting sleepy, eyes closed, not moving much. I thought it was because I had a regular 100 watt light bulb in the brooder to keep them warm, and maybe the light was keeping her from getting a good sleep. So I ordered one of the black bulbs for the heat that came in the mail yesterday.

THAT WASNT THE PROBLEM.

CONCERNS/MISTAKES I MADE:
-I took the 4 birds outside last weekend into the backyard for 5 minutes one day, and a few days later for 30-45 minutes. They hung out where I have hay/straw, also where my dog plays. IDK if it caught something from the soil, maybe it was too early to introduce them to the outdoors, but it was a hot day and I thought it would be ok.
-

I separated this bird into its own brooder as of 3 days ago. It sleeps so much, but it'll peep up if it gets rattled for a sec, then fall back asleep. I can hold it and lay it on its back, and she falls asleep with her head back

--2 days ago I got the electrolytes & probiotic powder packs in the mail, so I put that in the water (1 gallon with a pack of each)
---CHICKIE IS NOT DRINKING, even when I bring her beak to the water...
-This morning and last night she'd eat some of her starter food....(non-medicated)

--This morning I noticed she had some mucous/drippage coming from its beak...
I gave her some VetRX with a q-tip by her beak, behind her wings, a few drops in the brooder (full of pine shavings).

Right now, the chick is just laying on top of a mirror, usually my voice is enough to wake her, but she's not waking.. I blew on her and she just kinda slowly fell over and waddled herself back onto the mirror.. but she's laying on there, head outstretched, wings aren't really together... I have no idea what is wrong with her after googling and researching.. she had more drainage from her beak this afternoon when I gave her the VetRX, I also put a drop in her water..

I don't think any of this is helping. She's not aware of her surroundings, she is no longer drinking or eating... I don't know what to do. Any advice or help please?!!

-no they were not vaccinated
-non-medicated started food

Has she been pooping? If so, how is her poop?
What is the temperature in your brooder, both high and low? 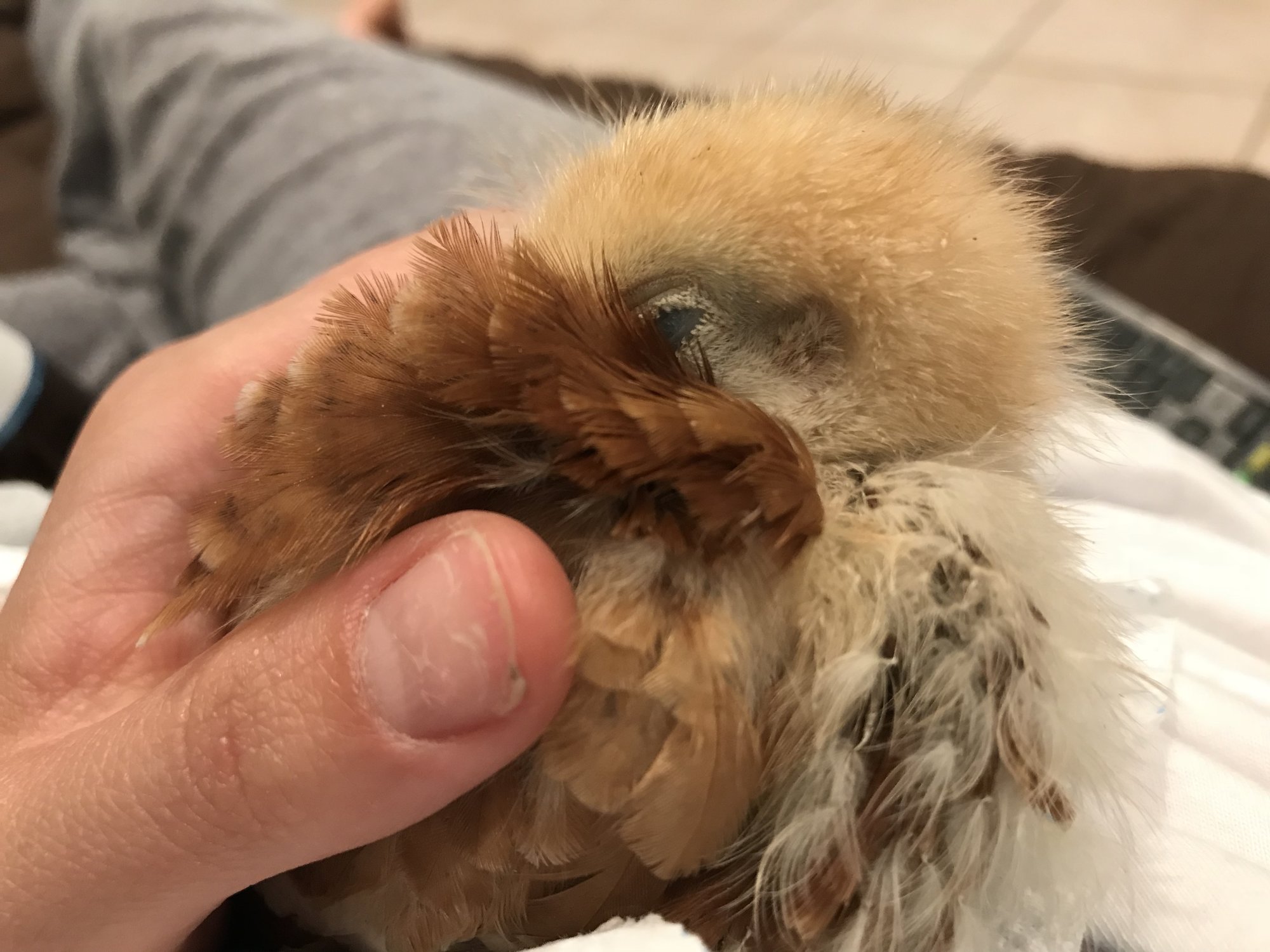 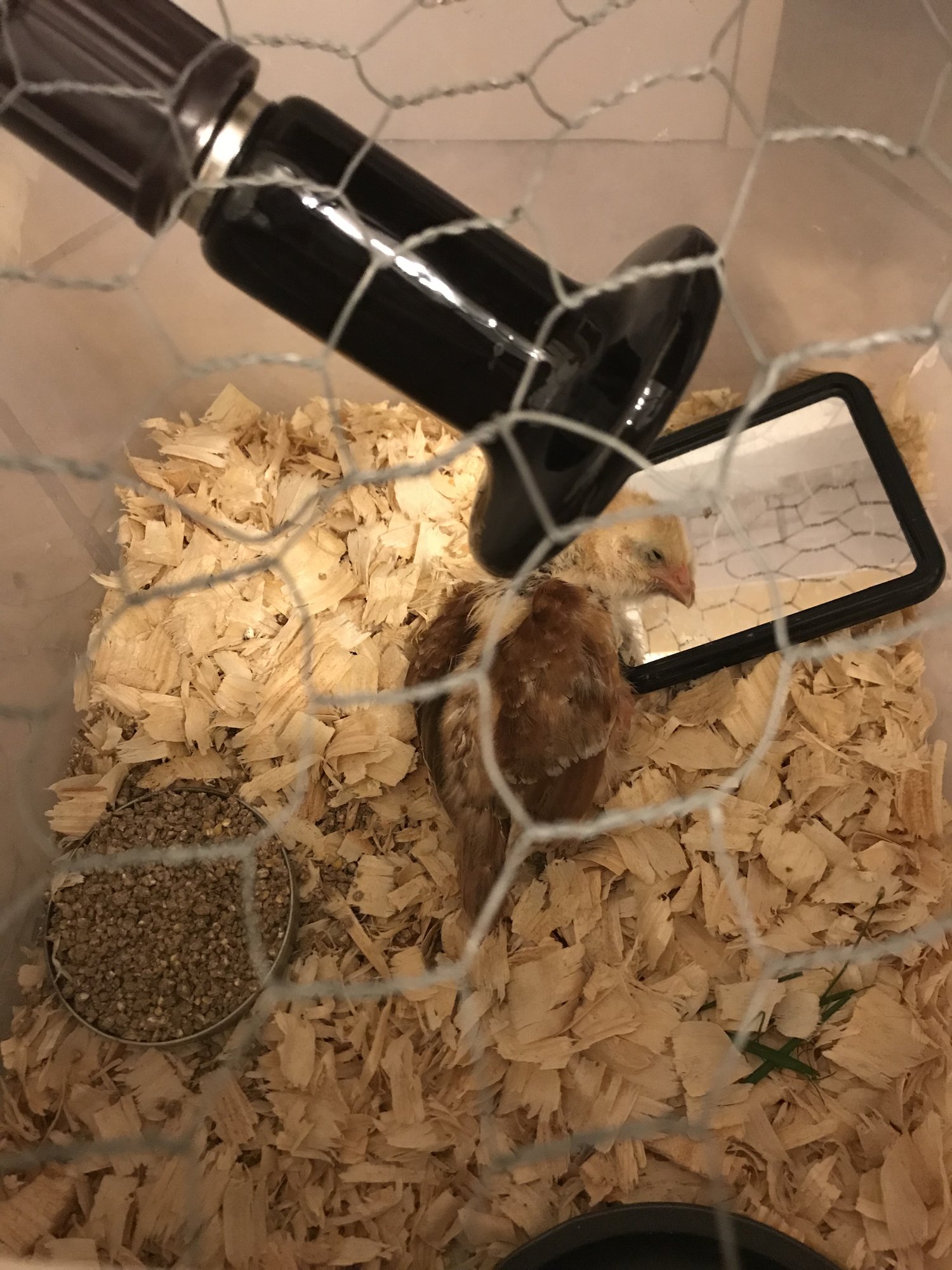 Cyprus said:
Has she been pooping? If so, how is her poop?
What is the temperature in your brooder, both high and low?
Click to expand...

I don't have an exact temperature...but I have a 100 watt bulb in the corner of the tupperware... her poop has been normal, when she poops... she hasn't been pooping much since she's not eating really too much... she drinks a little from a syringe right now... today i bought her medicated starter feed... she hasn't really touched it yet though.

I'd say treat for coccidia since she had soil contact and is right at the age where they are prone to it. Medicated feed won't treat an existing coccidia infection, it's merely a low dose preventative. You need some corid/amprolium.

As far as respiratory goes, someone else might chime in. It's possible if the straw/hay was moldy she could have inhaled some spores.

Where do I get that? I went to my local feed store today and they didn't have any of that, nor were they very helpful... they just told me to expect her to pass... can i order corid on amazon?

You can, but even 2 extra days without it can be a life or death if it is coccidia. Seeing how far gone she appears I'd say dehydration is your biggest risk and by forcing water you can also cause aspiration pneumonia.

Do I need to give this to all my birds? The other 3 are acting completely fine, they've grown 3x the size of the sick chick & have feathers where the sick chick has weird stud feathers around its neck.

The sick chick could even just have something else going on and be a failure to thrive kind of situation. Unfortunately once they get as far gone as yours is they rarely make full comebacks as babies.

PolarBerry said:
You can, but even 2 extra days without it can be a life or death if it is coccidia. Seeing how far gone she appears I'd say dehydration is your biggest risk and by forcing water you can also cause aspiration pneumonia.
Click to expand...

Have you heard of giving them water that has been boiled (then cooled) with garlic in it... for the antibacterial/anti-fungal effect... because i'm trying that too... :\